The fourth and final day of a Jerry Tindell Horsemanship Clinic in the Sierra Nevada mountains above Fresno, California. We said our goodbyes and left our second campsite and headed out. That's when we kinda got lost. Dag nabbit, we followed a guy who said "Take this short cut!" and then, endurance rider that he is, took off! That led to my companion and I getting discombobulated and riding the complete loop we'd been riding the last few days, coming back to the ranch for an unexpected pleasant last lunch with the cook, and THEN following the road out to the rigs. No loss, we got an extra ride in! 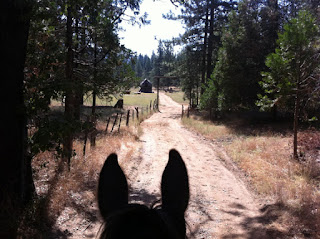 The beautiful ranch where we camped for 2 days, Cowboy Shangri-La, a land that time has touched but little. 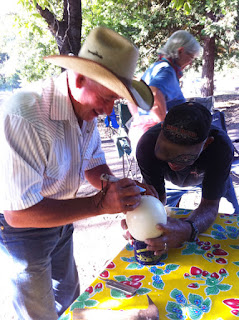 I worked real hard to come up with a gift for Jerry Tindell that would be appropriate. Since he is always teaching Tobe and I things, I thought of challenging him to learn something he didn't know how to do ... YET! I brought an ostrich egg for a one-egg omelette for a dozen people! I read the instructions while he used his knife to open a hole in the end and then blow out the scrambled contents! 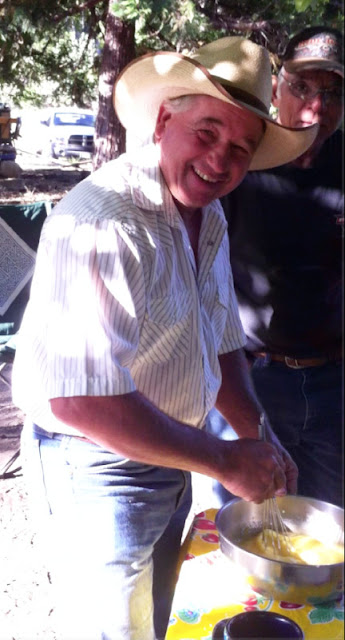 Always a good sport, JT rose to the occasion and breakfast was served. The cook was so skeptical that it would be edible that she scrambled up two dozen chicken eggs, which made an equal amount of scramble.... so it turned out that we could have a taste test. Quite surprisingly none of us could taste ANY difference. It was a first for all. 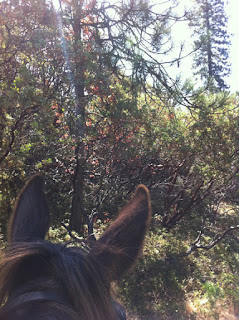 Then we all said our thanks and goodbyes and headed out. The red in this tree is poison oak, which will become more obvious as the season turns. 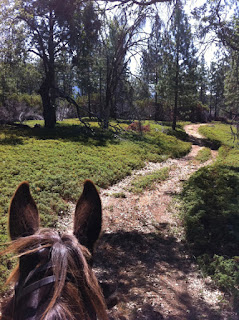 THIS is where we made the error of taking the advice of the guy on the Arabian who said "This way to the short-cut" and whizzed off ahead of us. So, my riding companion and I followed, never suspecting that it would be hours later that we would realize we'd gone a bit off in the wrong direction. My pal said it wasn't the first time he'd been led astray by a woman, and had the good humor to say it was a welcome opportunity for an enjoyable extra ride before hitting the road home. 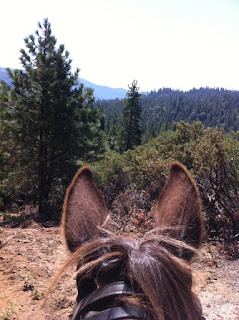 I started recognizing the views and thinking surely the "short cut" road to take us back to the rigs would appear at any time...... 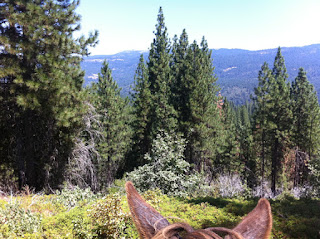 But no, we strolled along the miles of trails and roads we'd gone on the last couple of days, recognizing landmarks, and prolonging our vacation. At some point my iPhone lost battery power so then we were back to primitive reconnoitering, and eventually I had to admit I knew we were on our way back to the ranch. Where we strolled back in to find the cook and her husband relaxing, had a last nice chat and some watermelon, and THEN followed the road back to the place where the vehicles were parked, packed up, loaded up the animals, and made a vow to attend another Jerry Tindell clinic again next summer and have another educational adventure.