Tobe has moved to live at a new fabulous place, the O Ranch on the coastline above Santa Barbara. 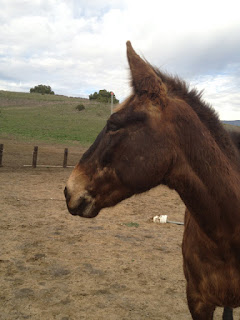 When we arrived at the new Ranch from the Tindell Mule School all of a sudden after months in the desert Tobe was looking at a sea of freshly growing grass. He couldn't take his eyes off it....  heaven was right there on the other side of the arena fence! 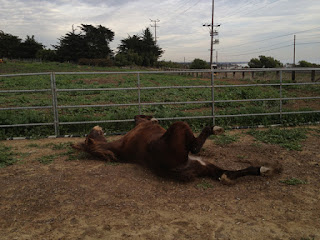 But first things first, a good roll in the dirt to shake off the hours of standing in the trailer. 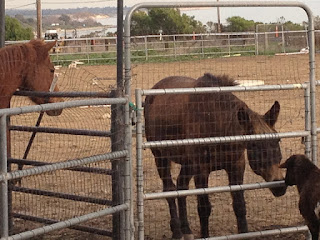 And then there were new friends to make. The horses came and stuck their heads over the fence, and made various mysterious squeals and snorts, and as per our plan Tobe was able to look at them, or walk away, without any confrontation. The sheep, well, they were certainly something new! They were not even as big as the dogs he knows............ and they seemed to have only one thing to say! Baaaaaaaaaaaa. 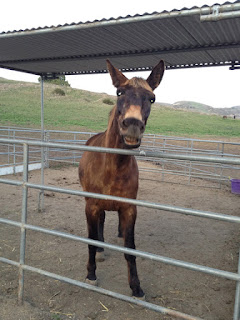 The caption on this one is "Where the heck AM I?"
The second night we moved him to a paddock, so he could still watch the horses come down out of the hills to feed and get a sense for their routine. 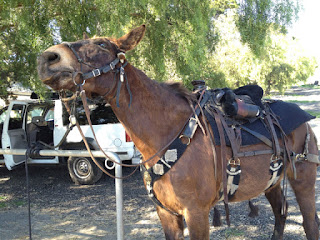 By the next day he was ready for a ride to explore his new home. 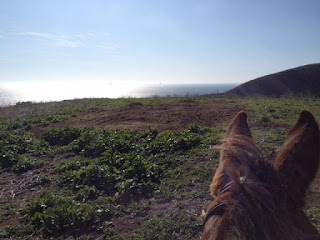 Up, into the hills, a sea of grasses and thistles and all sorts of things a mule finds tasty. 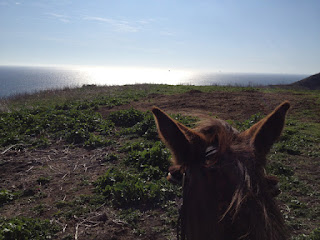 If you look very closely in the center of the light on the sea you can see an oil rig. 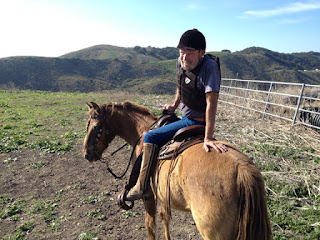 This is Robin Cox, who graciously took us on our first guided tour. He sits on a horse like he was born there, and I look forward to learning some serious finesse by paying attention when we ride together. He's riding Joker, who wasn't at all sure about Tobe, but he got over it. 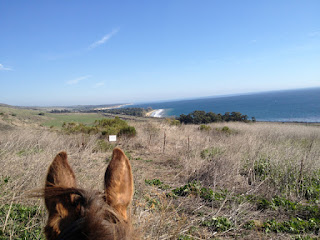 A view downcoast, looking South, a very perfect day for the first of February in the Land of Climate. 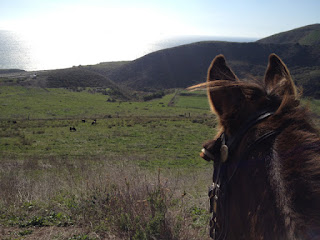 Tiny black and white specks are cows that graze next to a 5 acre organic vegetable garden. 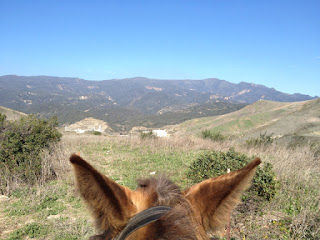 Over the ridge, Exxon. The oil comes in from the offshore rigs, gets pumped to this facility, and then into a pipeline that connects all the way to Texas. Who knew? 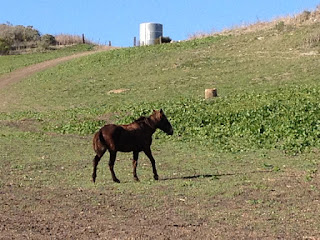 After the ride it was time to set Tobe free, and he started to explore the near parts of the ranch acres. He seemed to take it all in stride, no anxiety, just curious. 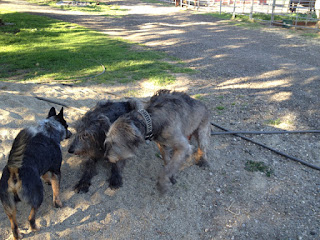 Meanwhile Angus and Fergus the Irish Wolfhounds were hanging out with the local canines, making new friends too. It is great they get to relax in the paddock area while I do things with Tobe. 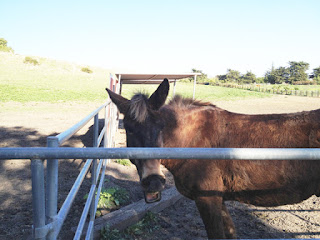 A new start for Tobe living in a much more natural way. Like Robin said "You are giving him freedom, and he will show his gratitude." So here's to Tobe having a huge amount of acres to graze in, and a dozen horses to get to know and hang around with, and having just that much more stamina and positive attitude when I do ask him to go for a ride.