5.58 miles in a total of 2 hours moving time
average speed 2.3 mph with one burst of 9.9 mph when we loped a bit
total ascent 684 ft
moderate trail, nothing technical, half of it could accommodate 2 equines walking abreast
well maintained and brushed trail, well signposted
two spring-locked gates that require dismounting and holding open to pass through 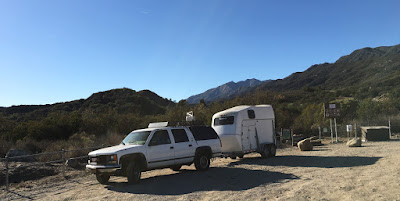 Time to load up the little BrenderUp mule trailer and SubUrban and head out to Ojai. I had never gone there to ride, but my pal Cowboy Bob and his mare Dutchess invited Tobe and I to come explore. We met at high noon at the Oso Road trailhead entrance to the Ojai Valley Nature Conservancy Ventura River Preserve. There are 1,583 acres, and we explored just a small part of it.
We went out Wills Canyon, and came back on the Rice Canyon trail. 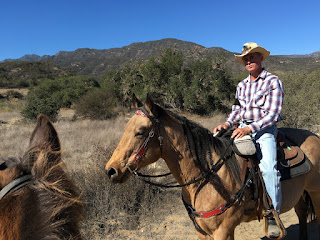 I use the Gaia GPS app to make the map above, which you can zoom down into to see the trail we followed. I just have it humming along in my pocket the whole time, and I take pictures and enjoy the ride, and only after I get back do I look to see where I've been. Cowboy Bob brings an Android app along on his phone that talks sweetly to him as he travels. Every 5 minutes she tells him how far he's gone and how much of a pre-loaded trail is left to go. If she doesn't talk for 10 minutes, you are going the wrong way! 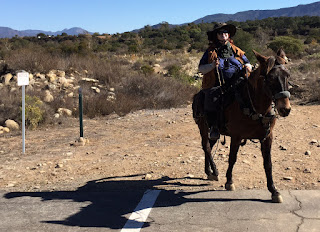 There are lots of different trails, dirt paths and abandoned roads, and the junctions are well marked with signs. 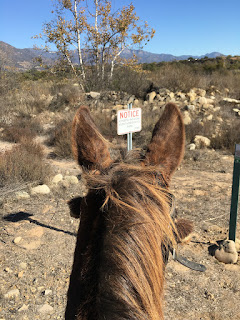 This sign says NOTICE : AUTHORIZED VEHICLES ONLY. NO FOOT, HORSE, OR BICYCLE TRAFFIC. So, I guess that means a Fish on a mule is OK. 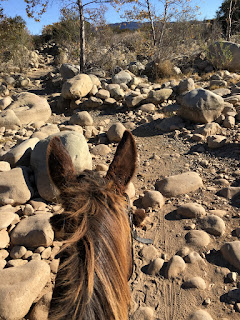 We crossed through the riverbed, a field of boulders that is no worry for a mule, he always knows where to place his feet. With the El Niño coming it is all too easy to imagine this filled with rushing water. 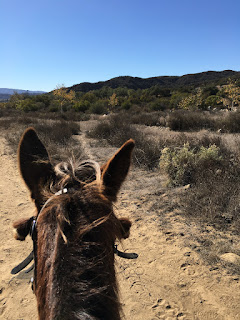 Then it was time to head from the flat lands up into the hills. The landscape changes very quickly from sagebrush scrub to mountainous. 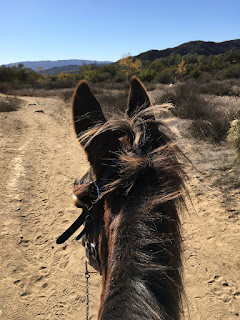 The wind picked up and so did our speed as we went along the wide manicured paths, this being the ADA accessible area I think. Many possible trails, but the audible GPS kept us on track. 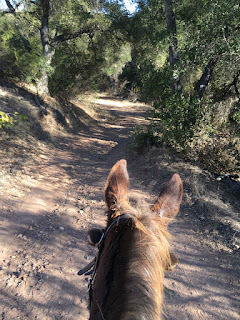 Then it was time to rise up into the forested area. The signs of the drought are very evident, but the trees have seen worse in their long lifetimes, so they provided a wonderful canopy of shade and dappled light. 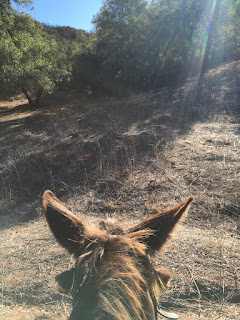 Then, not too far into the trees, we came to a crossroads and went straight through it when we should have turned left. If you look at the map above it you can see a bit of a spur to nowhere. We headed up a pretty grassy hill, bashed through some overgrown bushes, skirted around a scary drop off and then, realized that there was too much silence. The voice of Bob's guidance counselor had not chirped from his phone in way too long. A consultation with his map on the phone showed that the little blue dot representing our present location was way off the trail, technology is a wondrous thing, so we sidled on back to the crossroads and continued on correctly. 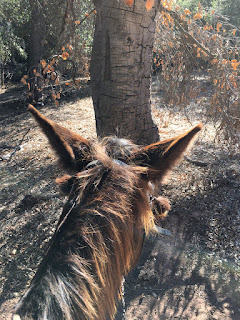 I'd like to say this was an example of Fall colors, but really I think it was just a dying tree, cooked by this summer's heat, holding on and hoping for the Winter rains. 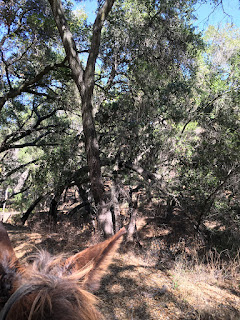 But a lot of the trees look quite healthy, and for most of the ride we passed through a pleasant quiet forest. The one time we were zoomed up on by a bicyclist Tobe Mule alerted me something was coming way before he was perceptible to me. I told Bob to be wary, something was up, and then whoooosh, around a corner came a speeder. But he turned out to be most pleasant, stopped to give us right of way, and then flew off downhill. Coexistence on the trails is a vital skill for equines to learn. 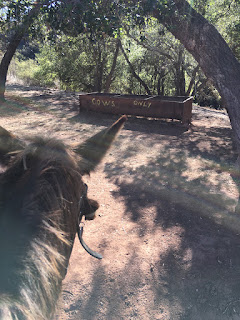 Bob was actually more worried about the gigantic longhorn bull he'd seen on his last trip here. I hoped he'd only glimpsed a steer, but once he told me about the length of those horns I was keeping an eye peeled. The only sign of bovine presence was this watering trough with COWS ONLY scrawled on it. Kindof like the clubhouse door with NO GURLZ on the door. We didn't need their stinkin' water anyway. 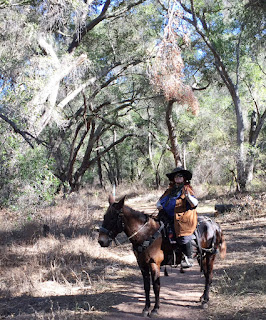 I know you are going to think this is the picture taken right before the branch fell on my head, but no. 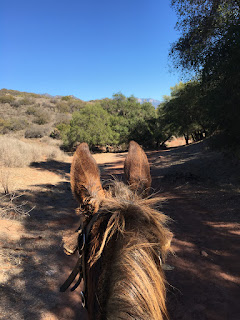 Now it was time to turn in an arc and start heading back toward civilization. Part of the area the trail passes through belongs to the Los Padres National Forest and that is where the cattle are grazing. Bob cleverly brought bungee cords to hold the spring gates open as we passed through, I highly recommend you pack that to ride here. The gates have such strong springs that it would otherwise be hard to hold them open to get a horse through. 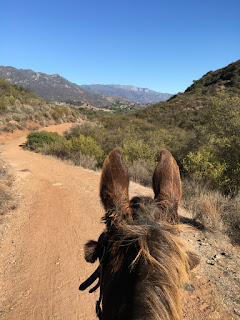 Looking at the enlarged version of this photo you can see the cliffs of the TopaTopa Mountains in the distance, rising above the town of Ojai. Facing West, they are famous for the "pink moment" glow when they are illuminated by the sunset. For explorers they are a welcome panorama, high on the horizon and a sure lodestone to guide you back to your trail head. 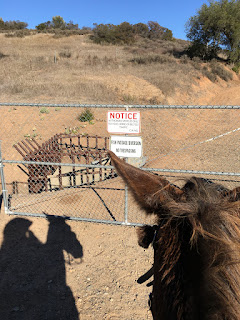 But first we had to cross over the Fish Diversion. It is a large cement river that allows spawning trout to pass up river to complete their destiny. Now, it is bone dry. 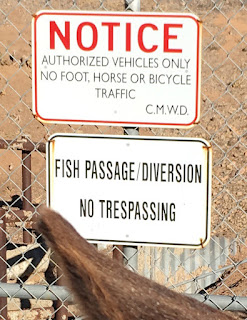 And once again I was glad to be a Fish on a Mule and pass through with impunity. 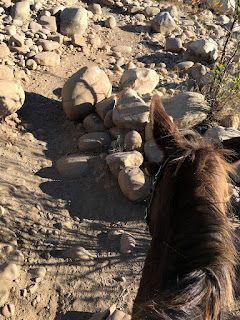 And back across the riverbed boulder field, with Tobe Mule stepping lively, sure he is heading back to carrots in his little transport. 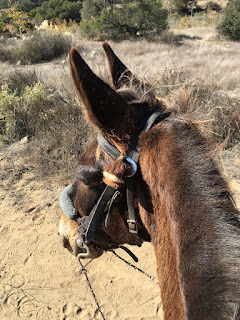 Another happy day, Friday the 13th was a lucky day for us!