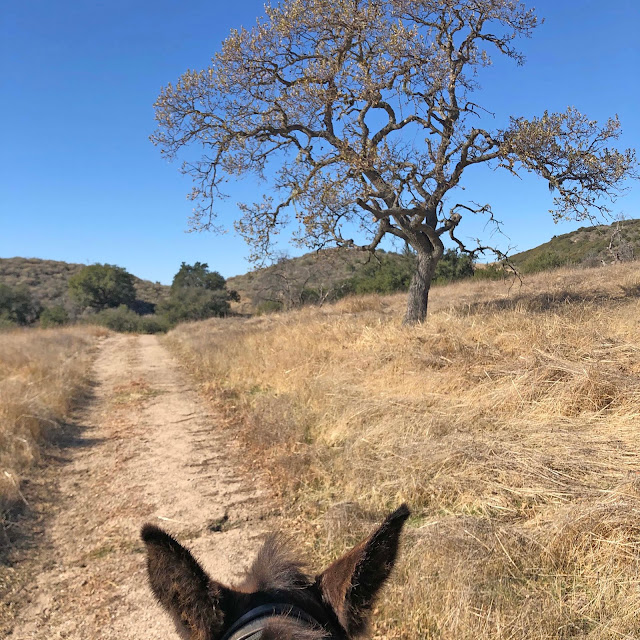 We didn't need adventure, we weren't looking for thrills and accomplishment. We just wanted a short stroll through landscape. The best antidote for the anxieties of civilization. 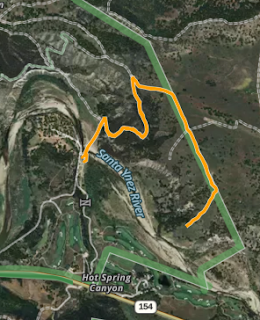 I invited the MeetUp to go for an easy stroll over to the edge of the Rancho San Fernando Rey and down the fence line to the bluff overlooking the golf course on 154.
But with the world in turmoil we were not granted an entirely placid day. 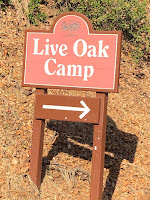 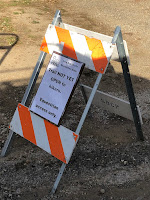 Unfortunately our beloved equestrian playground is under siege. A couple of weeks ago it was announced, with no public hearing or consideration, that as of 1/1/21 Live Oak would now be open to hikers. And worse, on 6/1/21 the trails would open to bicyclists. This is the ONLY entirely equestrian trail system in the county, every other park area can be hiked and almost all can be biked. Ever since the County started managing this place for the Bureau of Land Management it has been exclusively for horse and mule riders, for which we either buy day or annual permits.
Suddenly our peaceful refuge faces a potentially massive change. 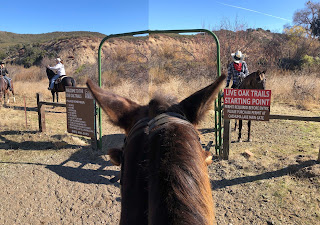 The equestrian community has gathered together to push back, with legal representation, and stop this revision to access. So the proposed change has been put on hold, for now. When we arrived today there was a sign at the locked gate stating that it was not YET open to hikers.
But then also next to the entrance to the trails were two new signs with the rules of use.
Just as we started to go through into the trail system we saw 5 hikers, equipped with euro hiking poles, heading for the gate.

Tobe Mule and I went over to them and made it very clear that they were not allowed. They argued, but I was on a 1200lb animal who actually likes to chase pit bulls, so he gave them a steely mule gaze as I explained that we were not going to let them proceed. Meanwhile Jamie was behind me with the Ranger on the line explaining the situation and the people wisely retreated. They walked half way back down the staging area and stood, as if waiting for us to leave so they could sneak through after us.

The Rangers later told me that they had parked illegally on the other side of the 154, presumably dashed across through traffic, and then walked all the way in.... all to avoid the $10 day use fee. Then they must have jumped over the locked gate. If they had gone to get a day permit they would have been told no hikers allowed.

After that kerfluffle we left them to be dealt with by the Rangers and headed out. 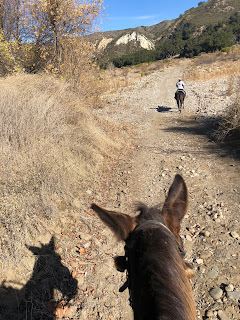 The first part of this trail is always fording the Santa Ynez River. Unfortunately we have only had 2" of rain since March of last year, so the river is underground and will remain so until we get enough rainfall to get it filled with runoff. A La Niña winter means nice dry days for trail riding, but the vegetation is suffering. 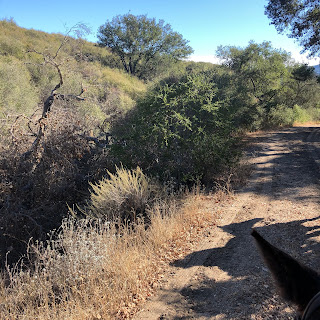 Most of the trails on this part of the property are accessible by emergency vehicles, so when riding in a group it is most pleasant to walk stirrup-to-stirrup and have conversations while the animals enjoy the rhythm of walking in step. 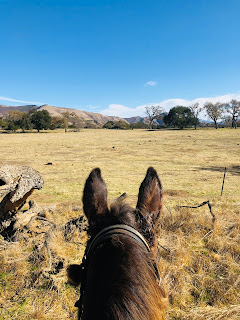 Once up on the mesa we could enjoy looking East across the Rancho San Fernando Rey, the largest remaining part of the Mexican land grant Rancho San Marcos. This field is usually dotted with cattle, sometimes horses, often deer. 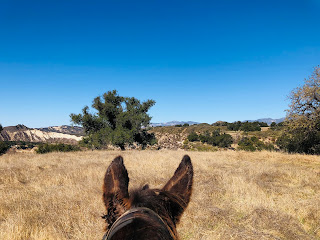 This land is being worked much as it was 100 years ago, with a light touch. 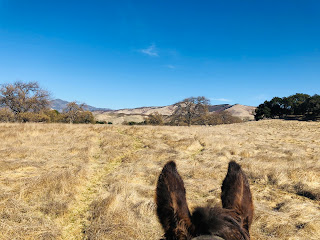 The flat mesa is framed by the soft mountains in the distance of the Los Padres National Forest. 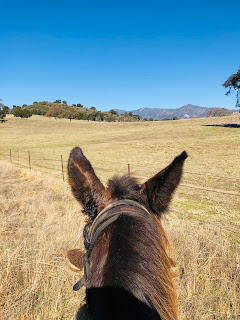 After spending the week indoors most of the time, working on my computer, dealing with graphic art and Photoshop, being able to come out here and enjoy the peace and quiet of long-distance views is quite restorative.

The idea of allowing hikers who will bring off-leash dogs is anathema to us. To say nothing of mountain bikers careening around the trails at high speed. 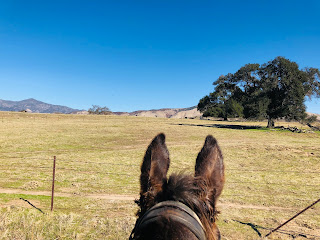 Yes, riding mules and horses is an eccentric activity, but for those of us who enthusiastically engage in this recreation we have a great passion to share our lives with our splendid 4-legged pals. 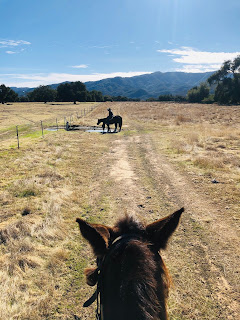 The rainstorm last week apparently filled this little wallow, from which the first two riders let their horses drink.

Tobe Mule declines water that cows may have mucked about in, he can wait until he gets home to get a drink.

In the Wagon Train days of the Western Expansion, mules outlasted every other animal, chiefly because of their stamina and ability to go longer without water. It was said if you had oxen pulling your wagon, you ate them when they died. If you started out with horses you left them dead at the side of the road. If you started with mules, you got to your destination. 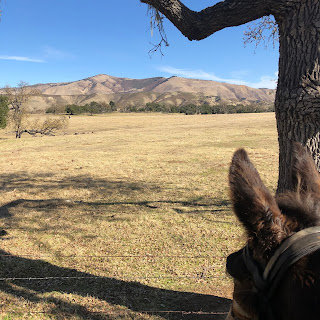 And if California was your destination, you would have encountered landscapes like this one. 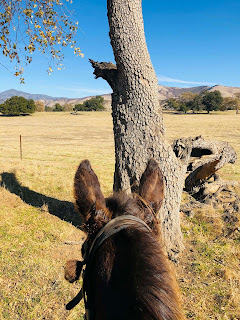 And trees like this mighty oak, with amazing bark.

It was so pretty I decided to take today's souvenir photos next to it. 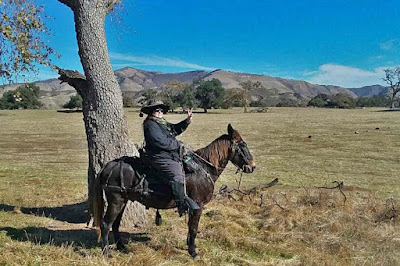 Here I am on Tobe Mule 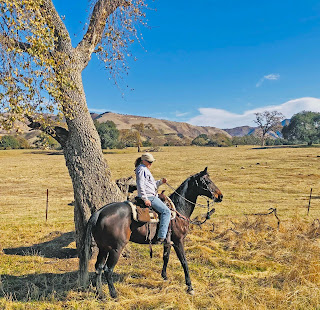 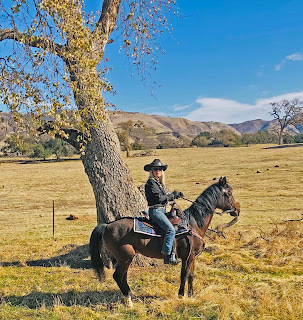 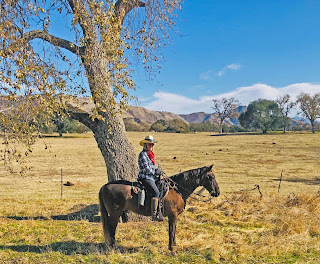 And Shayna on Winston 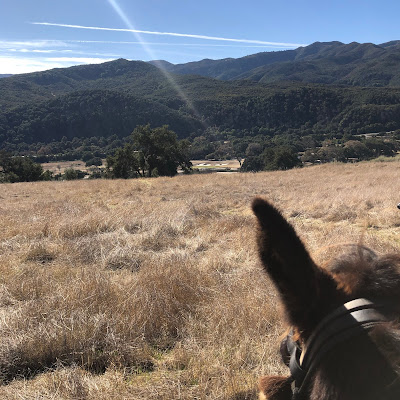 So we mosied our way to the end of the bluff overlooking the golf course and Hwy 154, then turned around to return to the staging area.

As we got set up to share a convivial lunch we saw a group of equestrians heading out with frantic off leash dogs trailing them. In a spirit of conservatorship, we called across to them that of course dogs are not allowed, never have been. They called back "Thanks!" and went on their way. Those dogs harassing the resident animals are inappropriate, and spooking horses being ridden can have tragic consequences.

Then as we finished lunch, the final indignity. Two people we know and like showed up with two hikers following their horses. They thought they'd been quite clever to convince the Rangers that they were going to take turns riding the horses with the two other people, when they had no intention of doing that. They just wanted to sneak hikers in, one of whom had a tiny infant strapped to his chest. I simply couldn't imagine him riding with that baby on board.

We seem to be at a crux of political upheaval, with the response to the pandemic bringing about new onerous restrictions to personal behavior. And I can't help but notice that breaking the rules, rules that are a social contract, may be in some way a cussed response to the generalized perceived loss of personal freedoms. 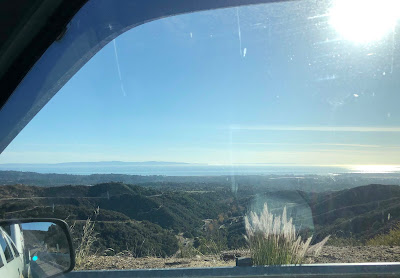 Muttering to myself "Not my circus, not my monkeys" I packed up Tobe Mule and headed back down the mountain, and at one of the obligatory turn-outs necessary to allow the speeders to whiz past I snapped this shot of the afternoon sun on the Channel Islands and the sea.

Another day in paradise.

"Through the sunset of hope,

What paradise islands of glory gleam."