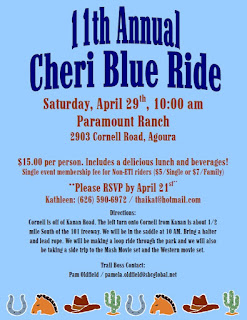 Every year Corral 22 of the Equestrian Trails organization holds a memorial ride in honor of a beloved past member.

The goal this time was to find and explore the set of the 1972-83 TV series M.A.S.H. about an Army hospital in the Korean war. 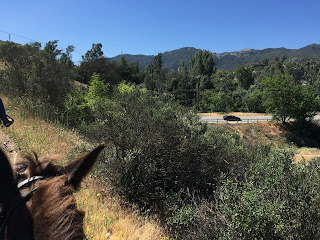 The movie ranch is located in the picturesque Malibu mountains.

In order to ride the trails we first had to cross over the famous Mulholland Highway.

Built in the 1920s, it is now a racing ground for motorcycle and sport car enthusiasts who vie to clock the fastest times while navigating "the snake" of a skills-testing course.

In 2013 Popular Mechanics wrote about it:
"It's a picturesque, diverse, long ribbon of road that starts in Calabasas, north of the San Fernando Valley, and runs 30 miles along the backbone of the Santa Monica mountain range all the way to the coast. ... The road is packed with some challenging curves, sweeping views .... and... soon the road gets tight and technical."

As you can well imagine this need for speed is not particularly compatible with 3mph one-horse travel, and even asking the gearheads to pause at the stop sign for our group to cross the street to access the other side is a test of their short patience.

After the ride I navigated it out to Kanan to visit a friend, and what I thought would be a short-cut turned out to be running a gauntlet of bikers intent on making their new time record, who would pass on blind curves, much to my dismay. I won't be taking a mule trailer on that road again. 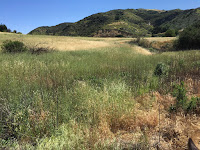 Next we walked through the valley where the film The Yearling starring Ronald Reagan was filmed in 1946. 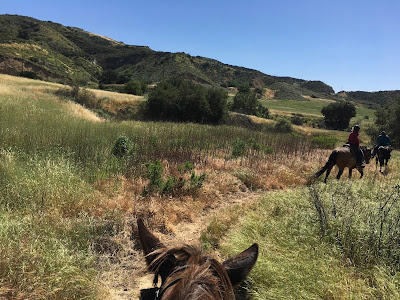 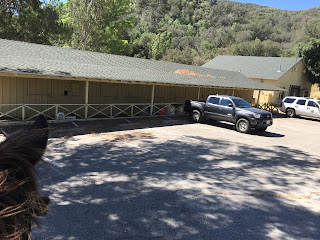 Reagan bought a section of this land and had a ranch here from 1957-67. The remaining buildings are this stable and barn, seemingly not being used except as a parking lot for park personnel.
There are plans for a memorial Ronald Reagan Equestrian Campground at Malibu Creek State Park but as of yet no ground has been broken or changes to the buildings.

The photo below shows Ronnie and Nancy riding there in 1958. 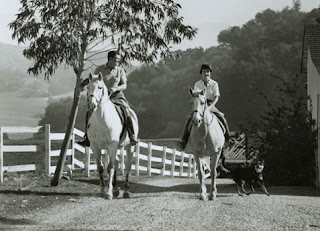 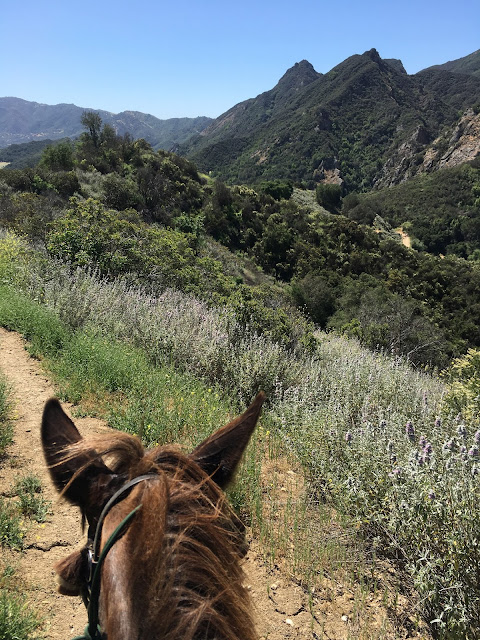 Once past the valley we turned into the mountains, and the dramatic landscape that was the backdrop to so many childhood Westerns immediately begins to captivate the senses. Close to the trail black sage grows in abundance, and the slopes are thickly covered with coastal chaparral plants. 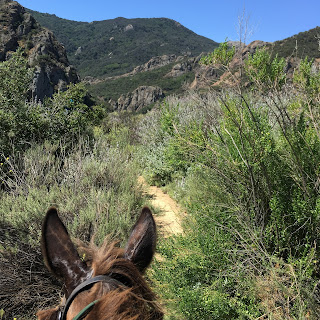 The trails are not particularly well maintained, but the wildness and lush growth after this winter's rains is small impediment to the passage of the group of riders. 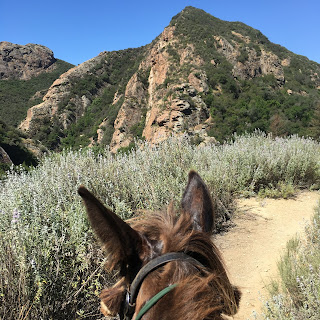 It is a classic California landscape,  with the bones of the land showing on all the steep mountainsides. As we push through the sage the scent envelops us and time slows to the pace of the animals' walking. 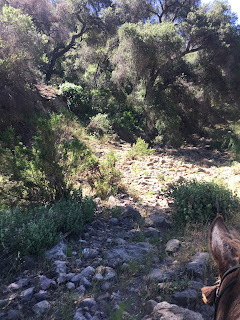 We took a turn up a canyon and into shade and tree cover. Trees that had grown into the path and ones that had fallen in storms were a constant challenge. What might be easily passable for a human at most 6' tall can often be an annoying obstacle for someone on a 16hh mule which means my head is closer to 10' in the air. The trail up the canyon got less and less civilized. Large rocks looked more like a stream bed than a trail, and we passed a lot of off-road bike riders and hikers, all headed to the M.A.S.H. set. 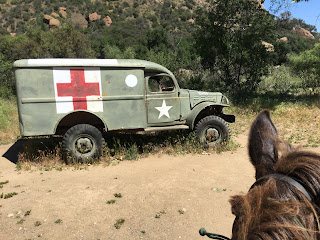 Finally, we see the abandoned Korean War era vehicles that mark the spot where the TV series was filmed. A large crowd of hikers gathered at picnic tables under shade cloth 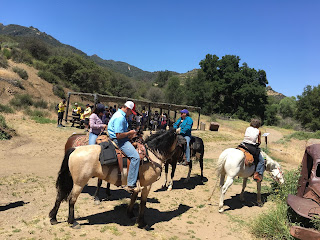 while our equestrian group checked their cell phones and took photos by the prop cars. 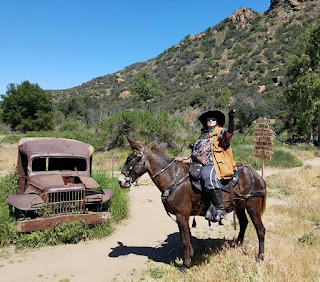 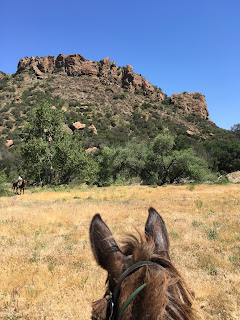 I stopped watching TV in 1972, so I don't have memories of this set location, but for many people it was an important deja vu experience, of the kind Southern California loves to offer.  Some people even swore they have memories of a character in the show somehow parasailing off this very mountain.

But soon it was time to turn around.
Time to take a ride through Western Town. 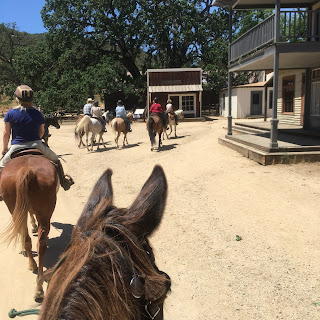 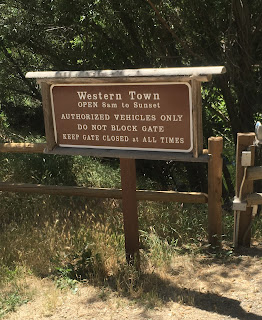 This charming town is in the media DNA
of anyone who ever watched a Paramount Studios Western. Most recently it was the set for Westworld. There is something very special indeed about imaging that you have saddled up Ole Trigger and headed in to town for a snort at the saloon. 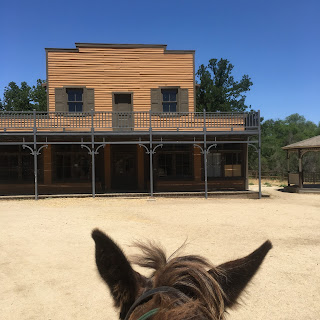 Ah, but the saloon was empty, awaiting the set designers and character actors. 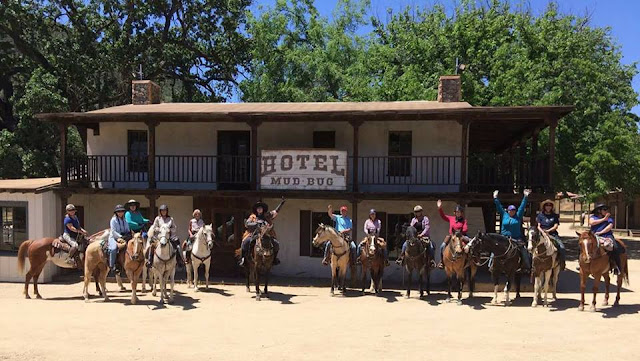 So our posse lined up in front of the Mud Bug Hotel and posed for a Happy Trails memory.

I have ridden this area many times, and know I'll be back again. With 8,000 acres to explore there is always something new to discover. The National Park Service has an  ONLINE MAP
that will help anyone who wishes to make a day trip out of Los Angeles and step back in time to Old Hollywood and the Old West. 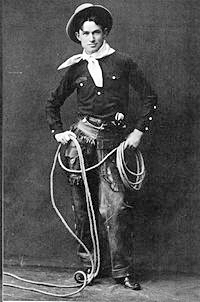