A ride starting at Rancho Oso, on Paradise Road, fording the river and heading up the canyon to the Lower and Upper Oso Campgrounds, then up the Santa Cruz Trail to 19 Oaks. And then, disaster struck. In the Lower Santa Ynez recreational area, behind Santa Barbara, Southern California.
Length: 7.3 miles
Duration: 4 hours
Difficulty: Strenuous. Single file, rocky track, Mountainous with steep climbs and descents, rocks and shale, narrow tread with drop-offs
Altitude gain: 1450 ft
Grade: III

On this map the trail is ONLY from the green start point and up the canyon on the right and back down. I was so agitated when I got to Rancho Oso again I forgot to turn off the GPS until I was on my way out driving down Paradise Road. 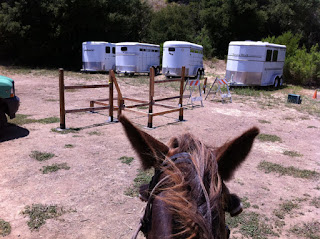 The day started at Rancho Oso, where a landscape architect who is researching designs for manufacturing an OHV-Horse Step-over barrier for the Forest Service asked for equestrians to come and walk their animals through the prototype. She wanted to to collect information to determine which combination of heights and widths are best to accommodate a wide variety of horses and a string of mules. It was poorly constructed of 2''x4''s, with exposed metal brackets with sharp edges and bolt ends facing inwards, and several animals cut their legs. It will be an annoyance to stock, and would be no hindrance to an athletic motorcyclist who was motivated to get through it. 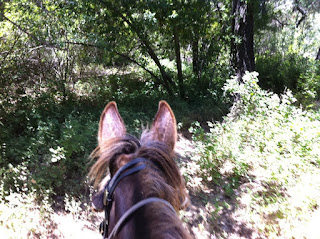 So that was a wasted morning, and I was glad to be done with it and I'd asked several of the people I'd invited to volunteer their animals for the project if they'd like to go on a trail ride together afterwards. Because I was told a large group of rowdy campers were at the White Oak Campground we headed off through the Poison Oak Forest to the river. 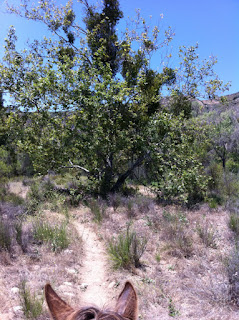 The mistletoe in this tree stands out in sharp contrasting deep green abundance. 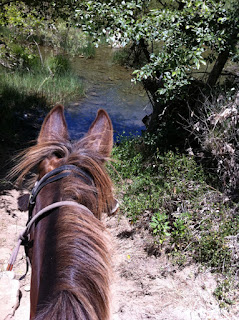 The river is lower and calmer now, and very clear. 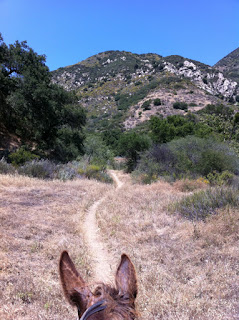 Once across we took the familiar track up the canyon, an easy climb through the now-deserted landscape. Since an access bridge to this area was recently closed and declared unsafe there is no vehicular traffic and thus no campers here. 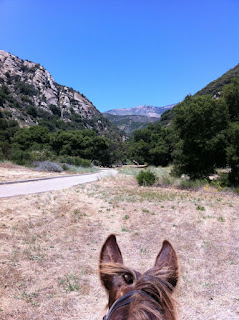 Eerie to have the roads clear of all cars, very quiet. 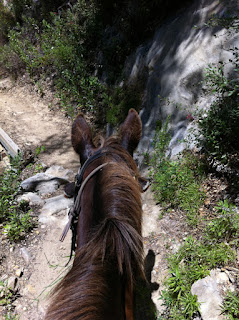 We voted to go to 19 Oaks, so from the Upper Oso Campground we started up the Santa Cruz Trail. There are a lot of narrow places, semi-reinforced worn areas, and rocky sections. 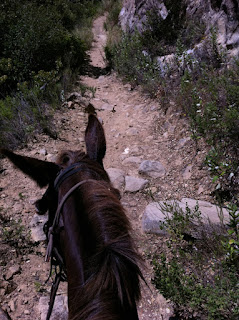 Trails that require navigating around rocks and rubble are no problem for a mule. We had 2 mules and 4 horses in our group, and Tobe and I led the way with ease. 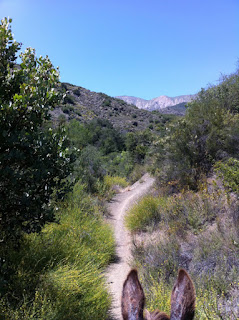 The trails are quite overgrown, so I travel with hand clippers and snip back the encroaching bushes as I travel past. I know I can't be the guy with the crowbar reinforcing the trail with water bars, so I do my BackCountry HorseMan effort by constantly snipping away the branches I can reach so efficiently from the back of my big mule. 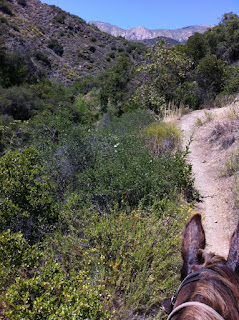 Around every turn is another vista in the distance, presenting the challenge of further explorations in the future. 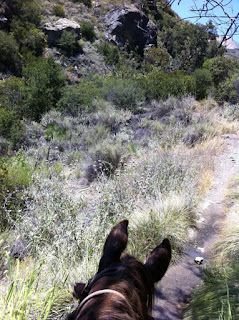 At low spots the trail would unexpectedly be mud and bog, the legacy of the extreme rain this winter, still seeping and finding its way down to the river. 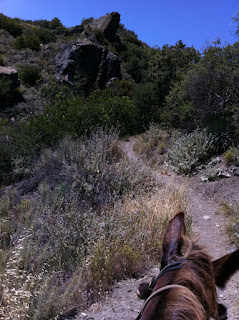 The geology of the canyon is stark and commanding. Much of the rock is serpentine, which glows grey-tourquoise and polishes like turquoise on traveled paths. 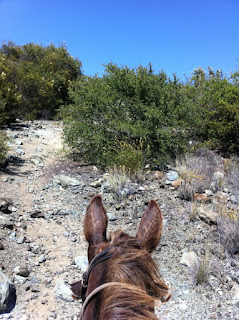 The serpentine against the lighter sand makes a nice contrast, like walking through a field strewn with gemstones. We left the Santa Cruz trail and climbed up to the 19 Oaks campground, and past it to get the best view of the whole valley we had just traversed. 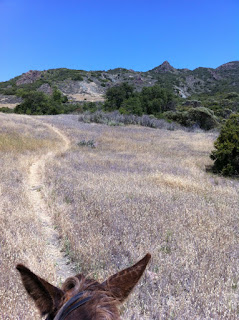 One mountain on the horizon looks very much like a volcanic peak. 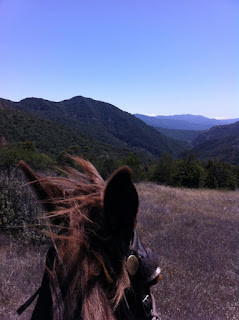 Turning around at the highest vantage point, with the wind whipping through our hair, we catch our breath and see the miles our animals have carried us across. 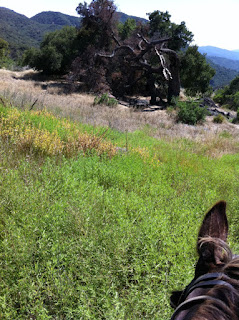 The blasted oak that must have died this past winter, the 19th of the patriarchs of the hill. 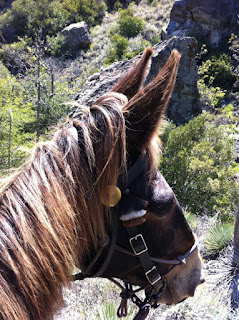 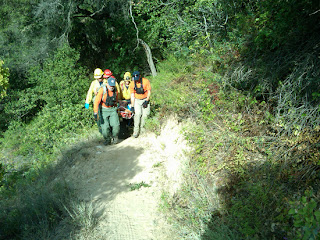