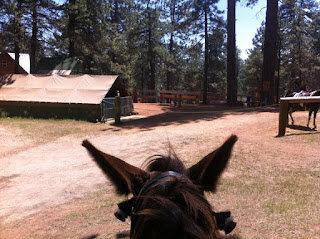 Here we are getting ready to set out on our third day of riding, and there's the special private paddock  accommodation that my pals at the RM Pyles Boys Camp give Tobe to use during his visits. 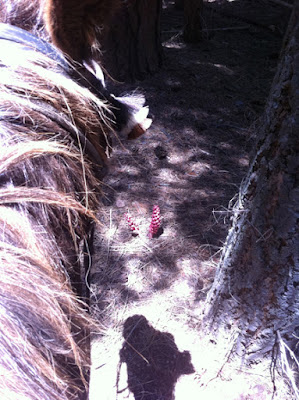 And very soon after entering the forest we see the weirdest plant that is such a surprising delight here. Called the snow plant, Sarcodes sanguinea is a truly beautiful wildflower and always a special find. It is bright pink and sticks up out of the ground like a floral hot dog on a stick. It lacks chlorophyll and is nonphotosynthetic, being fed by mycorrhizal fungal mycelia. 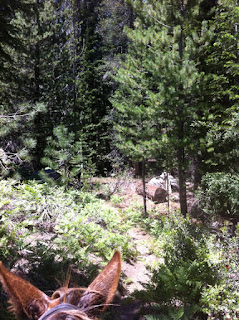 Very quickly we slip into the forest, with the hot day baking down in the open areas and the cool shade under the canopy. 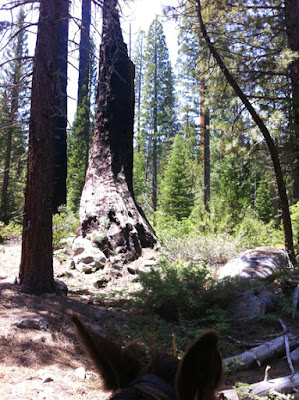 I like how erosion and fire have revealed the rock on the bottom left area of this tree's root system, encased in the root ball. 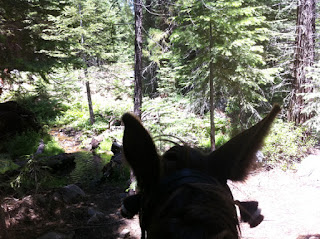 I try to get into the spirit of thinking like a mule as we travel, and when we come up to streams I KNOW he is thinking "salad!" He doesn't usually want to drink, but there is always some tasty riparian plant that he wants to get a good mouthful of. 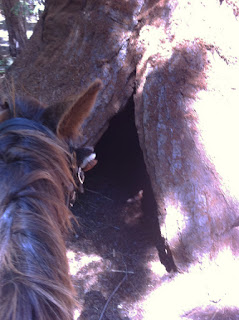 This is a rather unassuming little cave in the side of a giant redwood tree, one you'd have to have someone point out to you to even notice. 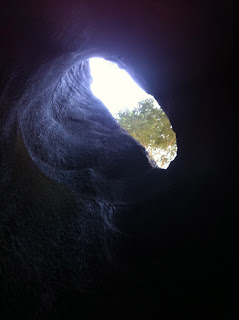 But once you crawl inside and stand up THIS is what you see. The Pyles Camp guys call it the telescope tree. It is an ancient still-living tree that caught on fire maybe hundreds of years ago, and the inside slowly smoldered away. Now it is all a slick black chimney in the inside surface, looking up to a glimpse of sky and branches far above. 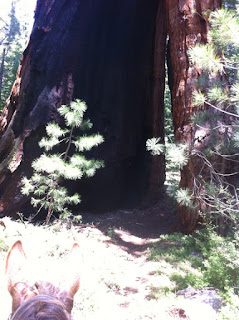 But of course my very favorite tree is the one you can ride through ON a mule. The size of this beauty just cannot be comprehended unless you are standing right there craning your neck to see it all. 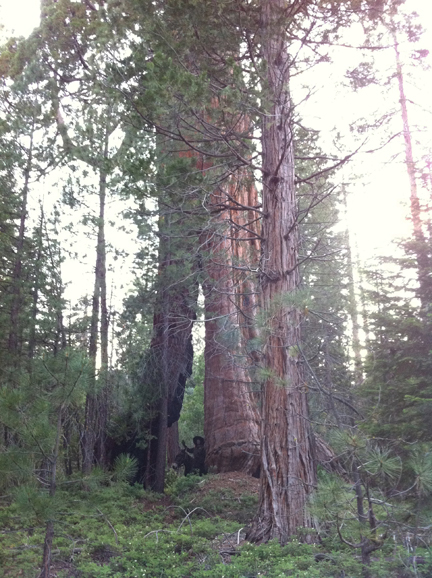 There we are, Tobe and I, that little garden gnome standing in the tree!

And here's a video of what it feels like to walk through it.
Giant sequoias are slightly shorter than the coastal redwoods, more massive and considered to be the largest tree in the world in terms of volume. 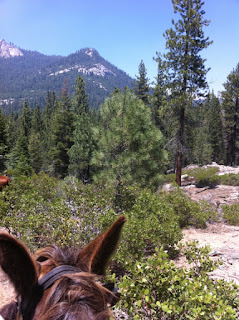 Popping out of the woods for a stretch we got a clear look up at Hermit's Peak. The Pyles counselors tell a scary campfire story about the evil Hermit and his wicked sister Hermitsina. 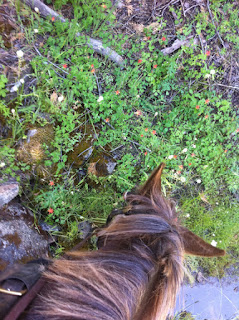 These tiny flowers were out in profusion in just a few places, a kind of mountain columbine. 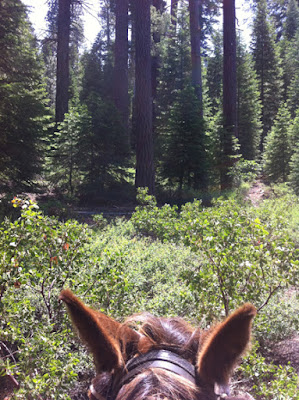 The bark on the redwoods is so visually rich, craggy and gnarled next to the lacy delicacy of the branches and the multiple shades of greens in the sun and shadow. 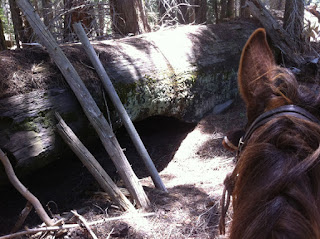 This is Hippie Hollow. The story goes that back in the 1960's a group of counterculture adventurers set up housekeeping in this cave beneath this massive deadfall, and were forcibly evicted several times by the Forest Service. Easy to imagine neanderthals crouching there, or BigFoot ! 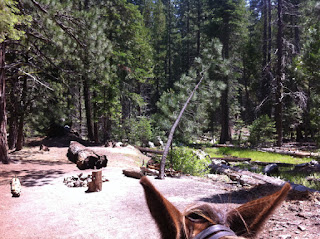 This is a campsite quite far into the forest, that was recently rebuilt and refreshed by the boys at the Pyles Camp. They hiked out and swept the area clean, stacked firewood, rebuilt the fire ring of stones, and made a beautiful spot where a trash-strewn clearing had been. The virtues of community effort and stewardship of the forest are taught, as well as respect for others. 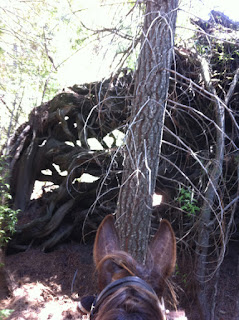 This blow-down is a great example of how big the root systems of some of these centuries-old trees can be. 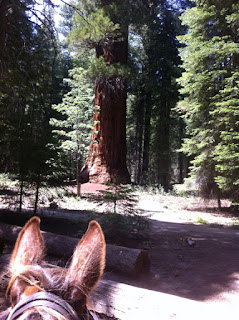 Finally !!! The goal of the trip, if there needed to be one: The official  George H W Bush tree! 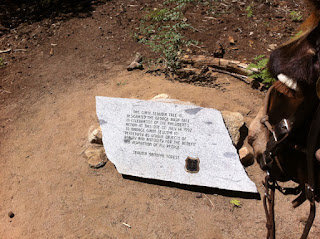 In 1992 President GHW Bush came to this grove and officially dedicated this as his memorial redwood. He also named the RM Pyles Boys Camp one of his "Thousand Points of Light." A designation they wear proudly, and taking a day hike to see this tree is a favorite outing for the boys. In his inaugural address he talked about the "community organizations that are spread like stars throughout the Nation, doing good." And he spoke of "...duty, sacrifice, commitment, and a patriotism that finds its expression in taking part and pitching in." 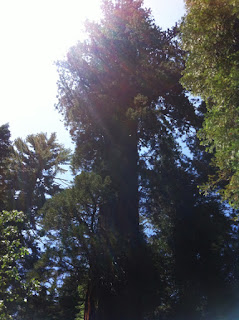 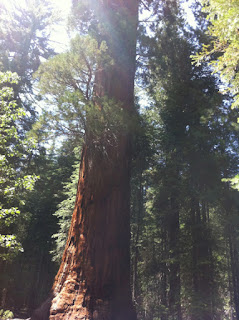 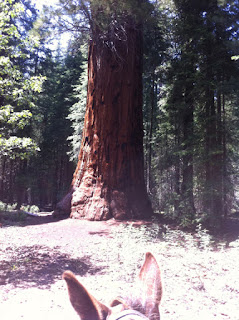 I tried to stack the three photos there so you can get a sense for how tall that tree is. The use of the words massive, gigantic, huge, all the adjectives eventually run out and anyone with a soul has to just stand in awe of these towering trees, grateful for the chance to experience their grandeur.
Giant Sequoias (Sequoiadendron giganteum) grow only on the western slopes of the Sierra Nevada in California. The groves are scattered over a narrow 260-mile belt no more than about 15 miles wide at any point. They range in elevations mainly between 5,000-7,500 feet. Here we are at 6,000 feet elevation. 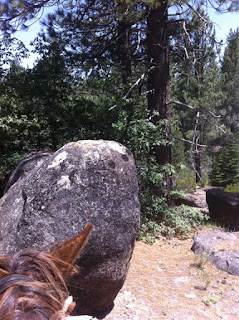 Scattered among the trees are boulders that might have been placed by the last ice age to sweep through. 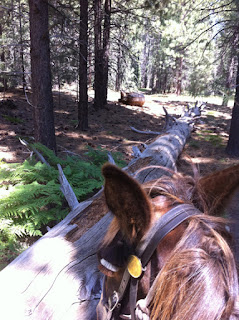 It is one thing to look up until you are dizzy trying to contemplate how tall these trees really are. But when they fall and lay out bleaching and take minutes to walk down, it hits home how out of scale and gargantuan they grow to be. Sequoias can live to be 3,000 years old. Humbling to contemplate. 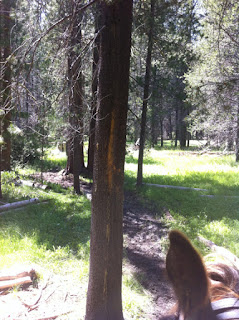 I looked all during this trip and finally saw it, the mark of bears scratching on a tree. On my visit last summer I saw a juvenile brown bear here on Summer Solstice, but it is rare to actually glimpse them. What you CAN see is the way they mark their territory, reaching up as high as they can and raking the tree so than a drizzle of sap leaks out and down the bark. The next bear will measure his own stretch against that of his potential rival, and if he is clearly smaller he will leave without attempting to contest for this territory. 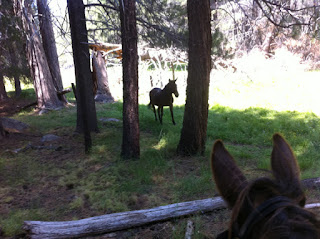 One wild thing we did see was this mule, that had somehow gotten outside the pack station paddock and was happily grazing along the trail. 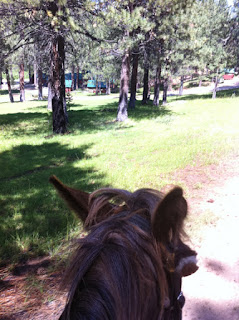 A tired and happy and quite domesticated mule carried me back to the camp, another lovely vacation ride coming to a close.