A ride on More Mesa, on the Western edge of Santa Barbara, on a large undeveloped area surrounded by housing and above the ocean.
Length: 4.8 miles
Duration: 2 hours
Difficulty: Easy. Side-by-side and single file, rolling hills with gradual climbs, ranch roads.
Altitude gain: 140 ft
Grade: I 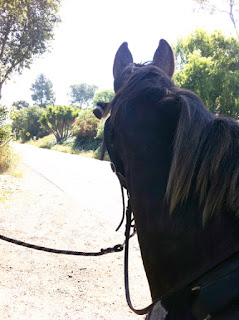 This ride starts with parking on a busy residential street, where people whiz by at high speed, oblivious, too busy with their interior dialogues to notice that a real animal is standing on the gravel turnout. Tobe keeps a wary eye on the street while tied up to the trailer, so I prefer to bring him already tacked up and ready to go so that we spend as little time as possible in this vulnerable position. 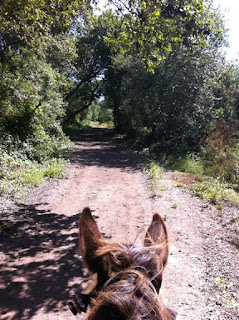 But as soon as we get on the trail, we can travel back in time to dirt roads and rural quiet. 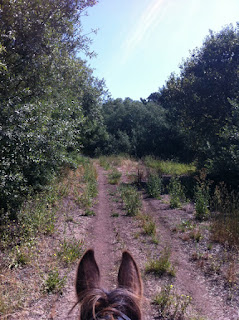 I suspect this was at one time a farm, and these open roads are the service roads, but now only hikers and riders venture into this overgrown area. It parallels an irrigation canal, and the water drainage creates a cool and shady forest. 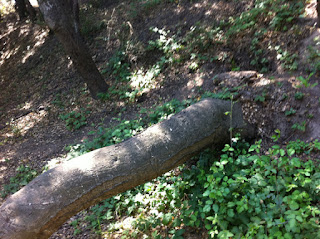 This giant tree fell a year or so ago, and rather than remove it an alternate trail has been established in the embankment above, going up and over the roots. It effectively blocks any motorized vehicle access. 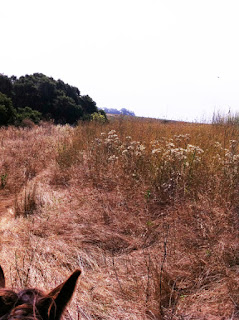 Coming out of the canal-side path we ascend into the bright summer sunlight, burning the grasses to hay. 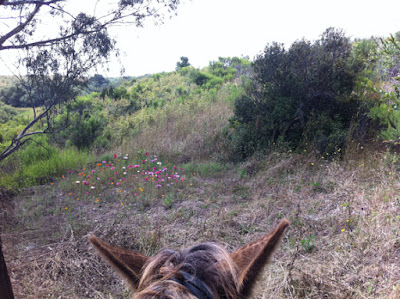 Unexpectedly this tiny patch of multicolored poppies appeared blooming profusely on the side of the trail. 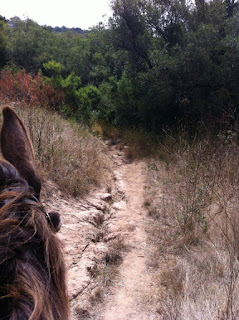 There appears to be very little trail maintenance being done, and this downhill slope has a rutted erosion trail and the worn trail alongside. 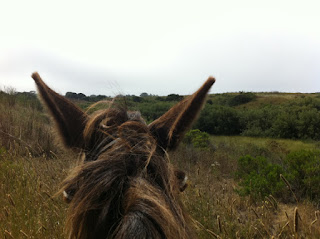 Once up onto the Mesa, the view out across it to the sea is lovely and the onshore breeze heavenly. On a day when nearby cities in Southern California are experiencing triple-digit temperatures, we are in 74 degree comfort. 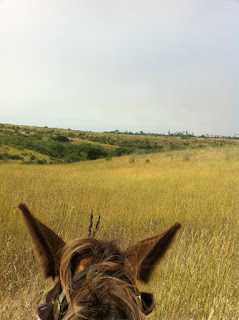 I don't doubt that Tobe enjoys the view, but I acknowledge that for him this represents more an endless buffet of tasty grasses. 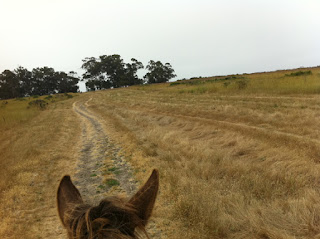 Some sections of it have been recently mowed down, in particular this path that leads straight out to the beach access point. The continued public access to this beach has been in contention for many years, but for the time being it is still free, only requiring a long walk and then a climb down a steep cliff. 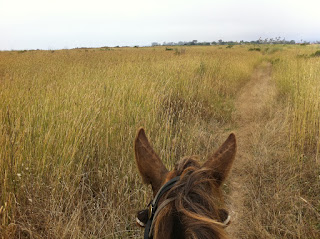 But since we have nowhere in particular to be, and the beach is not our goal, we stroll the buffet. 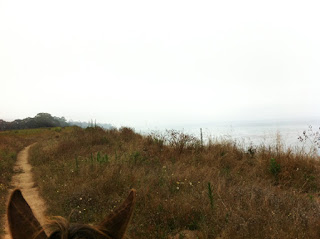 Coming out all the way around the field we walk along the cliff edge, looking over a sea filled with fog and the cooling marine layer. The offshore islands are invisible, small price to pay for the lovely lower temperature. 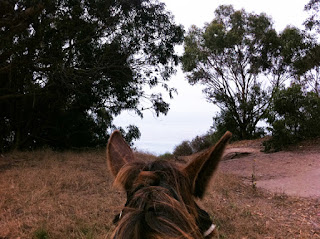 This access to the beach leads to steep steps, not possible even for a very clever mule to climb. Since it is known as a premier nude beach, we give a skeptical eye to all the people we see arriving, wondering who is coming to strip and swim and who to ogle. 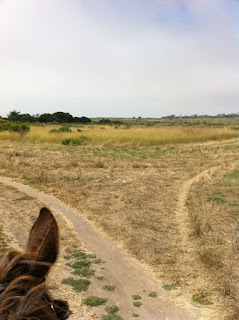 Back up to the Mesa, quiet and still, choosing a crossroads to carry us back to the start point. 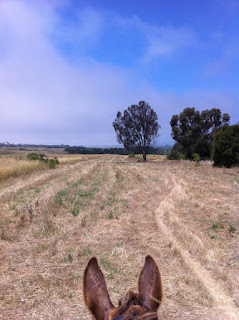 Large swaths of the grass seem to have been knocked down, in somewhat random pattern. 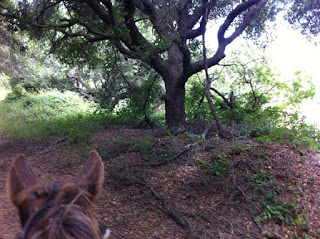 But once back down on the forest trail there is no maintenance being done, and the oak trees show evidence of years of deadfall branches shed below them. 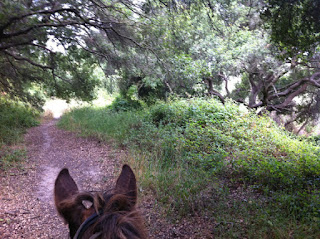 The poison oak is profuse, doesn't bother me in my leather chinks and Tobe even eats it. But slowly and surely is chokes out all the other undergrowth. 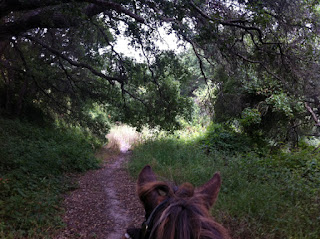 And many parts of the trail have branches that are closing in on the trail. I have my trusty Felco clippers in hand and constantly snip off what I can as I ride, doing my bit to keep the trails open. But these trails clearly need a once-a-year visit by men with big trimming tools to take off whole branches. 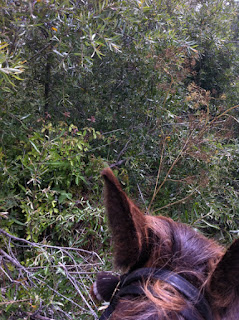 In fact, we hit a total dead end when we discovered that a trail we tried to follow back to the parking area has been completely lost to willows. Tobe was thrashing his way through the underbrush until finally there simply was no more trail ahead to be discerned and he stopped. I announced that we were turning around and to my horror the other riders told me Tobe had a bee crawling on his face. I was once bucked off him when he was stung, so it was with infinite care that I brushed the insect away before it could do any damage, and we retraced our tracks and went home by another route. Could have been a rodeo! But not today!