I was invited to join two wranglers who work at  Rancho Oso for a moonlight ride, so Tobe and I headed up into the hills at a most unusual hour, and rode the Arroyo Burro access road out to the junction of the now-closed Mattias Protrero Trail.
We met up at the barn, and headed off to ride to a peak from which we could observe the full moon rise.

Length: 6.3 miles
Duration: 3 hours
Difficulty: Easy. My companions wanted to just walk out on the Arroyo Burro access road, so it wasn't really a "trail" ride at all. The biggest challenge was coming back out, when the moonlight was a bare glimmer through the trees and I had to rely on Tobe's powerful eyesight to get us back safe. 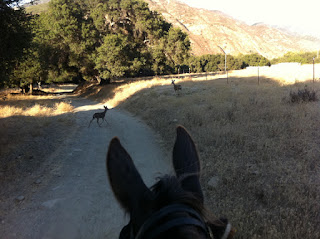 As we started out from the barn we saw several mule deer, wagging ears quite as splendid as Tobe's own. 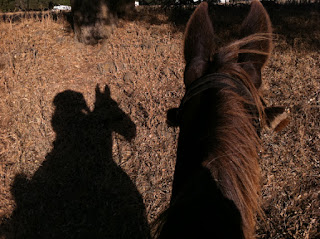 It was a new experience to see shadows cast so long on the trail, I don't think I've ever started a trail ride this late in the day. 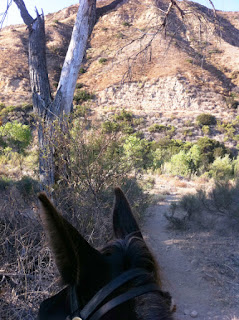 We crossed over the Santa Ynez River to proceed back down the canyon. 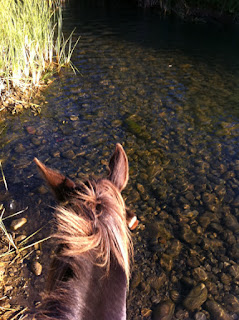 The cattail rushes make sandbars and islands in the river, and the slanting light makes the water crystal clear without a surface reflection. 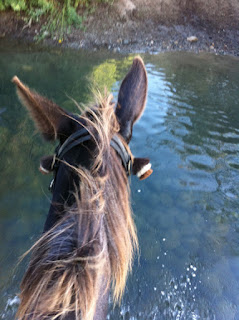 Admittedly Tobe was having a bit of an unruly mane day. I was a bit late getting to Oso, so I tacked up in a flash and we both were a bit windblown. 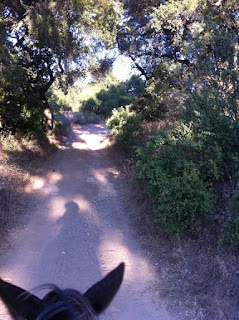 Mules are for single track and steep climbs, not walking on roads! But heck, I was happy to have been invited and if this was the route the other gals wanted to take, that was fine. 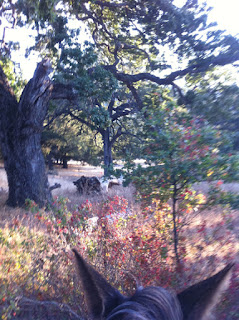 This old oak looks like it was split by lightning, and the red color of the poison oak growing all around it makes it look like fall. 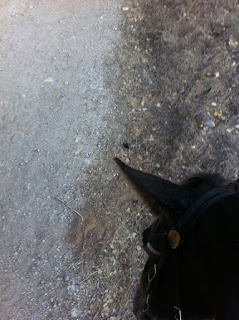 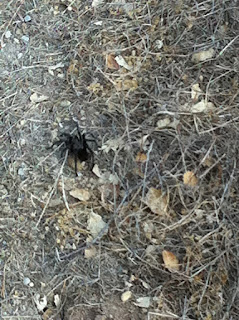 Aiiiieeee!  A really BIG tarantula! Usually when you see one you see dozens, because you've wandered across a route they follow in their obscure mating rituals. But this solitary soul was just meandering along alone. 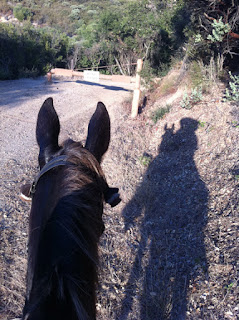 The road is closed to vehicles except in case of fire or danger. 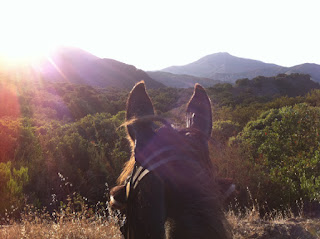 The sun began to set behind the front range, and the colors changed dramatically. 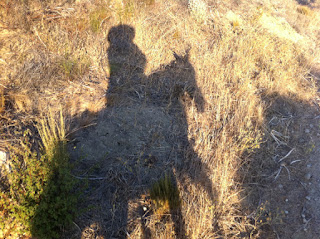 We were shadow riders! 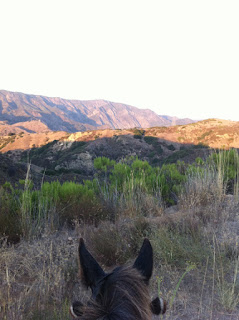 As the shadow of the mountains began to creep across the open chaparral the distant colors changed to their sunset glow. 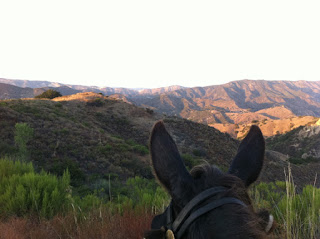 If you came to California and just stayed on the freeways and in the cities you would never have any sense of how beautiful the interior is, and how untouched. Safe to say that there is not a single person who lives in ANY of that visible world, miles and miles of wilderness, empty of humans except maybe a ranger or two. 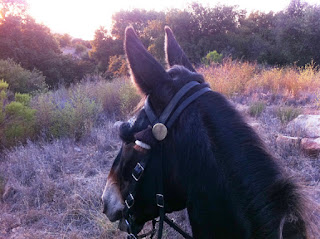 Tobe grazed and had a snack, and we watched the balance of the setting sun and the rising moon. 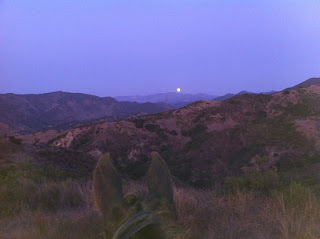 And finally the beautiful Harvest Moon came up above the distant mountains. Our goal had been attained, the vision granted, and Summer has officially passed and it is time to ready for Fall.