The last day of our island week, and I really wanted to do the Trans-Catalina Trail. So I was very pleased when a group of five decided that we would do that route on our walk out and back to Twin Harbors. We all packed up our tents and belongings, left our campsite cleaner than we found it, and then started off on the trail.

Length: 7 miles
Duration: 3 hours
Difficulty: Extreme riding. Very difficult. There were sections with drop-offs that went so far down straight to the sea I had to tell myself to just trust in the mule and hold on. I was very pleased that we went up it in the direction we did, there were some nearly vertical places that would have been much harder to come down. A BIG rush of accomplishment to have ridden this. 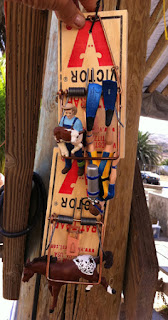 Probably a scary sight for any men reading this blog, but seriously funny to the women on this campout: the Man Trap necklace! Victor rat traps filled with various occupations of men, shown here are a farmer and a diver, and an appaloosa horse for a cowboy. Call the theme Mardi Gras and keep an open bar and you never know WHAT the gals will come up with. 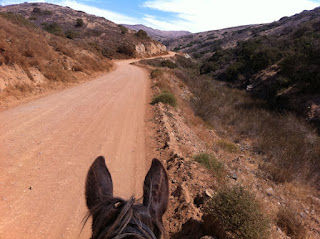 Today was the end of the party, so after we packed up we started out. My group decided not to do the part of the Trans-Cat trail that was closest to the campground, and I'd ridden it a couple of days earlier, so I was OK with that. They said they wanted to save the animals' strength for the really technical part of the trail, and not knowing what was involved I took their word for it and we did the first part on the road. 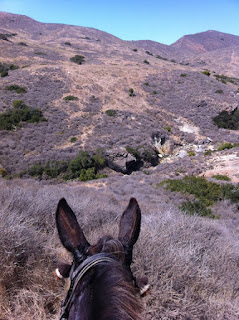 Then we turned off into the wild, and struck out across the landscape toward the peaks. 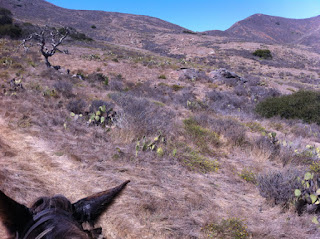 Gnarled ghostlike trees and cactus filled the landscape, in its dry cycle of summer sere grasses. 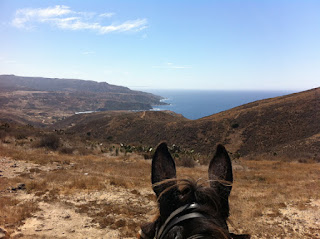 One last look back fondly at the Little Harbor, now just a memory and a goal to call us back here next summer. 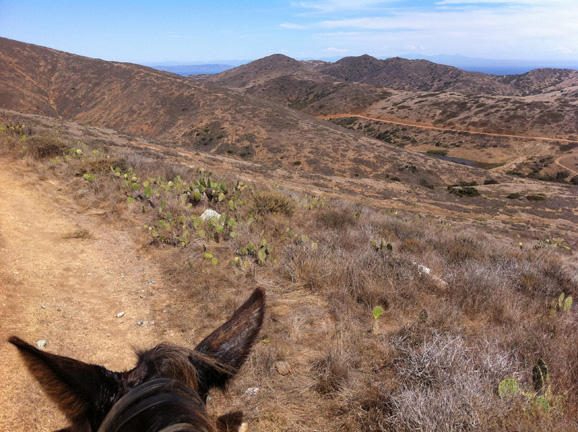 Then up so high that the mainland suddenly became visible on the horizon. Soon, soon enough we would be returning there and picking back up the reins of real life. 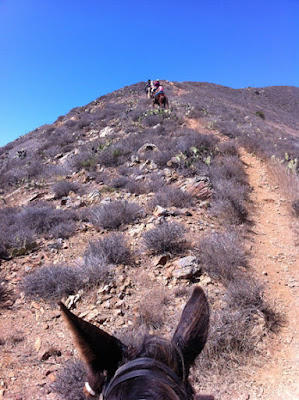 A nearly vertical climb, with some rocky sections that required the animals to plant their feet and jump up. We riders just held on for dear life. 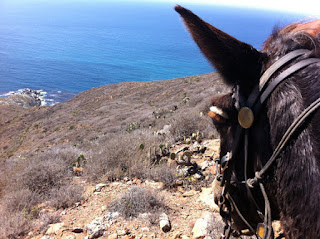 Because if you turned to look down, the steep drop had no hope of catching yourself on a tree or bush............ it would be a slide to oblivion. 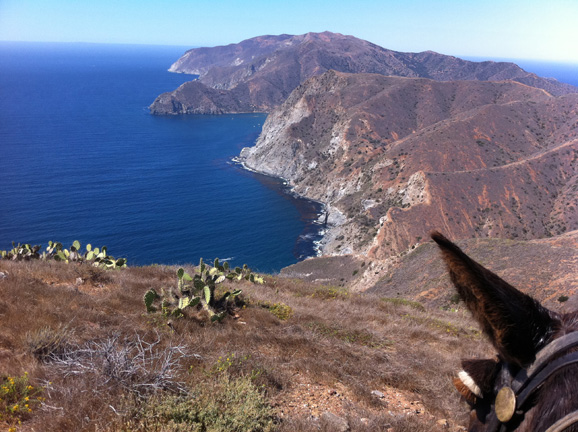 My favorite photo from the whole trip, it captures the stark beauty of the land and the compelling calm of the sea. All from the top ridge on the very edge. Getting to this point, and seeing this, was a beautiful affirmation of all the hours I have spent learning to ride well. This took bravery, skill, and a darn good mule! 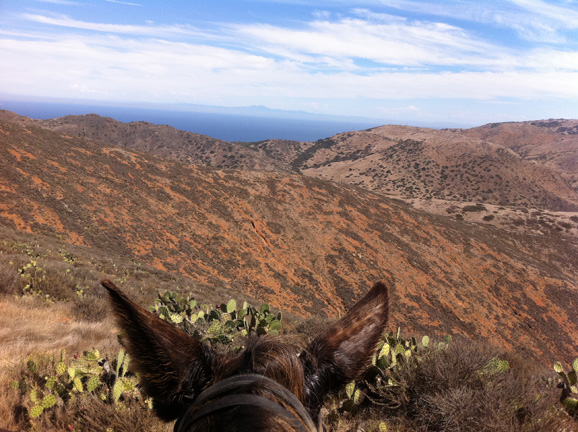 And there is the mainland, looking like an island itself in the marine layer. 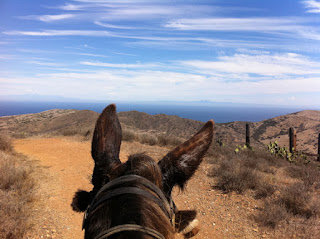 All the time we were trail riding we'd been looking out to sea, but now, turning our faces toward home, the mainland compels us. 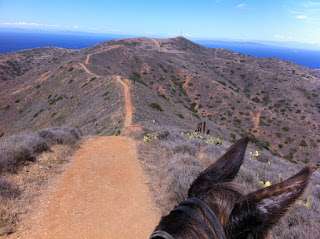 The trail was wide enough at this point to drive a jeep, or walk two animals abreast. But it was very steep........ just ahead of us here it disappears utterly as it plummets down a hillside. 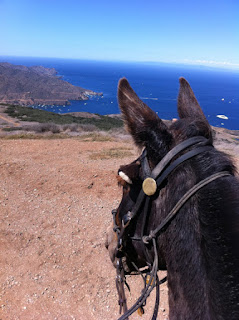 But we made it, and once again stood on the hill overlooking Twin Harbors and the pretty sailing ships anchored there. 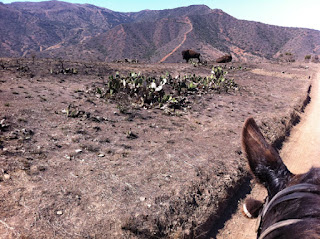 But no, it can't be that easy. I had been thinking I needed maybe just one more buffalo photo, and these huge lads were just before the gate above the town. 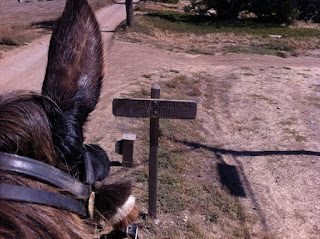 This is a sign for the Trans-Cat trail, in front of the Yacht Club. Arriving back at Twin Harbors brought the grand total of miles ridden on Catalina Island in this week to 45.3, a number I am quite pleased with. 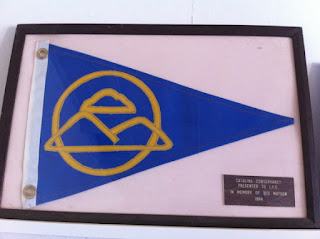 This flag with a stylized graphic representing Catalina was on the wall of the Yacht Club. It is a building built as barracks for soldiers during the civil war, that is now owned by members who each maintain one room there for their use when they sail over from the mainland. We were graciously given a tour of the interior. 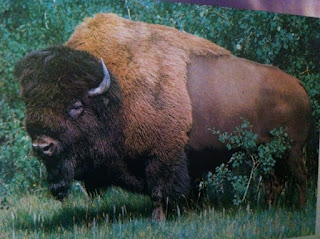 And this poster was on the wall of one of the rooms.............. I would have liked to have taken a photo this good in real life, but the iPhone does not have a zoom lens and I couldn't ever get up the foolhardy courage to get up close and personal with an animal that could decide to have a bad day and stomp me. 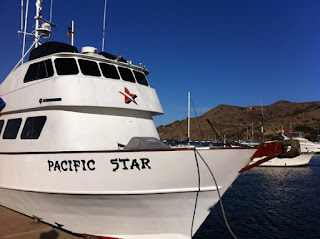 So then it was time to board our own yacht, the sturdy Pacific Star, and with my "Sea Bands" firmly on my wrists and some OTC pills and a dram of faith, onward to the mainland. 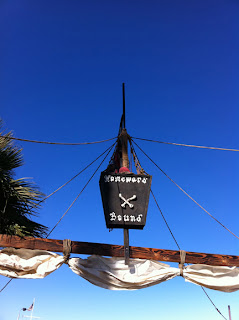 Homeward Bound. Part of the decorations for the annual Buccaneer Days festival, a Pirate farewell to this enchanted land.