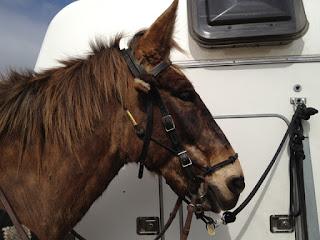 Tobe waits patiently at the BrenderUp, he knows the Greenwell Preserve, been here, done that. We were asked to go along as a friend did a pre-ride examination of the trail, in advance of leading the local Los Padres Trail Riders on an outing here tomorrow. 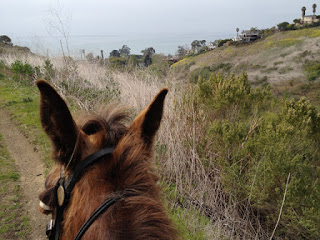 We took the trail to the South, which rises up and immediately gives a view out to sea. 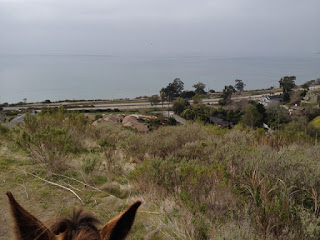 It was a very hazy day, so the islands on the horizon are just barely visible. 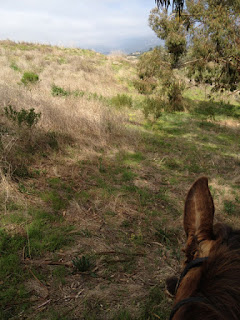 A lot of this trail is along the edges of estates, and across meadows awaiting development into McMansions. 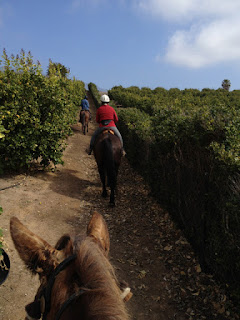 If you're not the lead mule.......... you watch a lot of ass.  Here we are strolling down the trail as it cuts through a lemon orchard. If ONLY the internet provided the "Scratch n' Sniff" capacity, and readers could have the heady scent of lemon flowers in bloom on a hot sunny day. 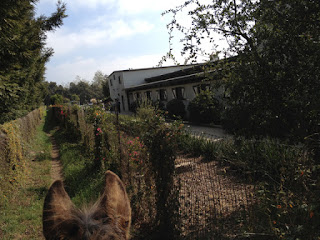 In back of a very swanky horse facility we saw
a glimpse of how "the other half lives." 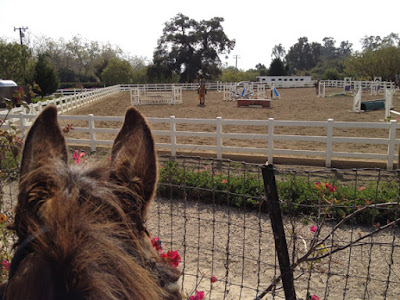 I can't say I have much ambition to have Tobe learn to be a jumper, so we both watched with curiosity the young girls circling around the arena jumping over obstacles. 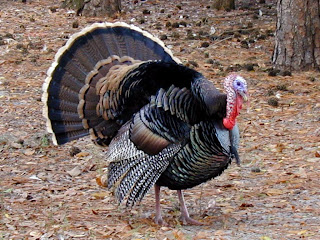 And then, we had a run-on with a turkey. Now, I'm all for every rich person being able to do whatever they want to do with their estate, but right adjacent to the trail is a large pen filled with turkeys and I don't know what all else, because the turkeys were more than enough. Tobe heard their gobbling as we entered that section of trail, and I confess the rodeo that ensued was SO extreme that I was quite incapable of taking any photographs. The gal on the Percheron dismounted to lead her horse past, and Tobe pulled rank on me and decided that HE was the more astute member of our team and was making the executive decision that we needed to get the heck out of there. He spun around and proceeded to fly back down the rocky trail, nimbly dodging rocks in the path, as I tried to yank him around into a one-rein stop. In perfect duet on my left was Barbara on Tillie mule, neck and neck in the panic sweepstakes. 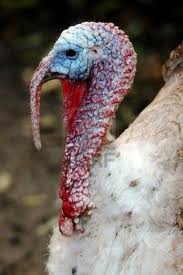 I mean, just look at that face. I do agree with Benjamin Franklin that the turkey should have been our national bird, but please, somehow my Kentucky mule has missed being bomb proofed over a charging tom turkey. I know we've seen wild ones, mild flocks minding their own business, but this guy was in full plumage and aggressively charging  towards the fence and Whoa Nellie! off we'd go, Tobe would spin around again and take off.
Eventually after much refusal, insistence, and sashay away we did get past. But I was quite proud of myself, this was NOT something I could have ridden without injury several years ago. 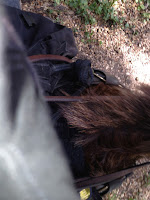 This photo is a place-holder for the turkey zone, I took it just so it would insert into the trail map not too far from the turkey alley.
THIS is exactly why you pre-ride a trail. Since tomorrow's ride was to include inexperienced riders now Barb was in a pickle, and had to start thinking of alternate routes. 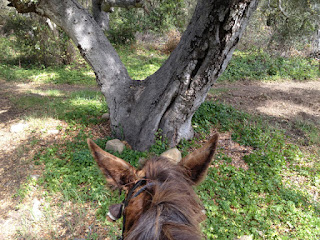 Then we came to this tree which has a story for me. Five years ago when I was just starting to ride Tobe I came on this trail with the Montecito Trails Foundation annual Fund Raiser. I was in a big group of riders and several bees flew out of a hollow log. One stung the gal riding in front of me, and more stung Tobe, who bucked. I distinctly remember looking down and seeing my hand on the horn and thinking "Wow! You rode through a buck!" and then the next thing I knew I was on the ground. He bucked twice.
The woman leading the trail ride told me if I couldn't get right back on and rejoin the group I could find my own way back to the starting point, and she led the group off and LEFT ME sitting under this tree crying. Thanks, Jane Murray, I'll never forget that moment.
But to my rescue came two Mexican gardeners, who held Tobe for me and I climbed up in that tree and remounted and caught up with the group. I had what looked like a black eye on my hip, but I rode the ride. I was beginning to learn to cowgirl up, and also to be wary of who I go on rides with. 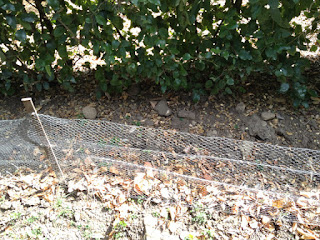 A little further down the trail I saw this raw rebar sticking up out of the vegetation on the side of the trail. 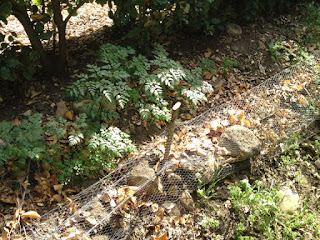 A landscaping webbing is stretched between them. Just last weekend one of the officers of the BCHC told me he was on a trail when his mule fell against a piece of raw rebar just like this and it poked her so deep in the belly she would have died from peritonitis, so he had to put her down. He asked me to be on the lookout for this specific hazard on trails now, and photo document it, and here was a very long stretch of it! 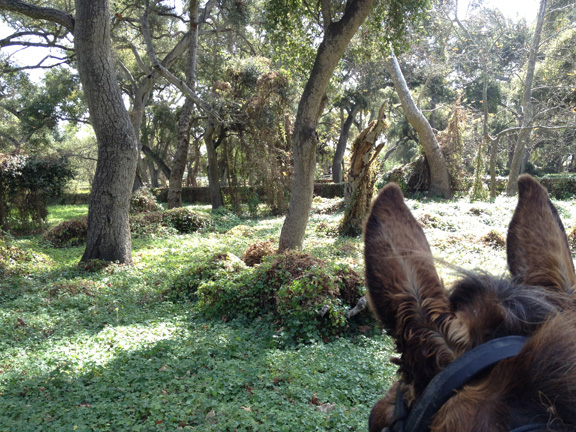 This forest is being completely smothered in Cape Ivy. It is an invasive non-native that steals the light and nourishment from other plants. these trees will be destroyed by it if it is not cut back, and many of the area canyons look similar. 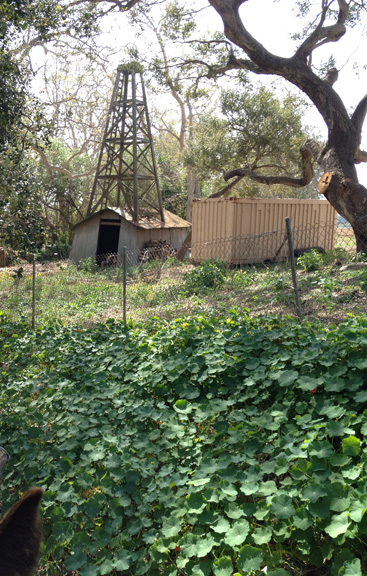 I don't know anything about the history of this odd structure, it looks like an oil derrik rising up out of an old shed. 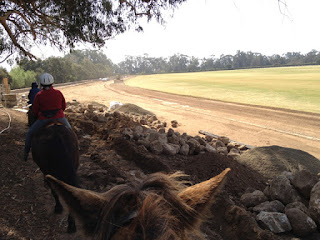 r
We came up out of the canyon trail to the edge of the Polo Grounds, and see heavy construction in progress. Having completed the Turkey Trial, motorized equipment and stone masons were no problem. Here are the piles of stones soon to be assembled into a wall bordering the field. 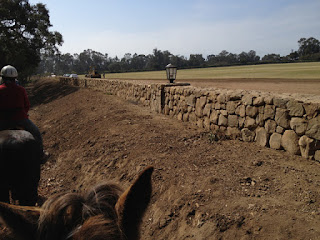 And there's a section of completed wall. 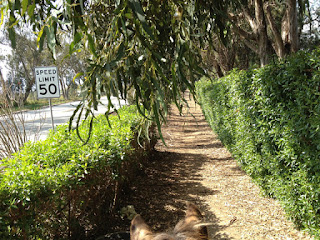 Coming out at the edge of the polo grounds, we turned back towards the Greenwell Preserve, which required walking along the road that is frontage to Hwy 101. 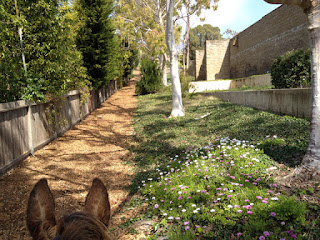 At the power station there is an easement trail that takes us back up into the hills and off the street. 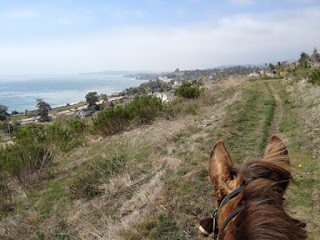 Once again looking across Summerland, with Santa Barbara in the fogbank upcoast. 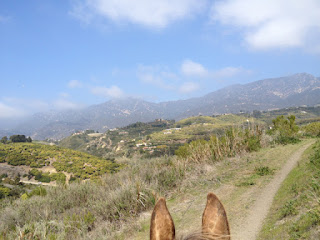 The mountains are probably ten degrees hotter, and above the coastal fog. 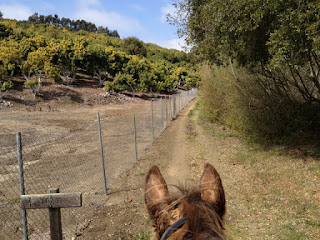 We got back to Greenwell but Barb was thinking she wanted to see alternative trails, and we had some extra time, so we headed up the Edison, which is controlled by a couple who have horse pens there and requires signing a permission slip to cross on the trail. We had signed in advance. 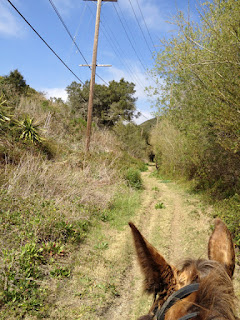 It is a quiet and lovely trail, and leads to some rigorous climbing nearby. 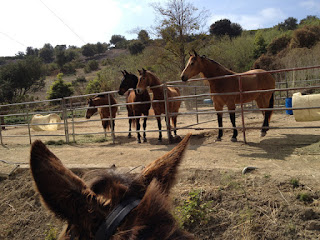 But when we got to the horse area a huge truck was dumping a load of sand, with much attendant clatter, and all the equines were watching and jumpy, and we decided enough was enough, time to trek back down. 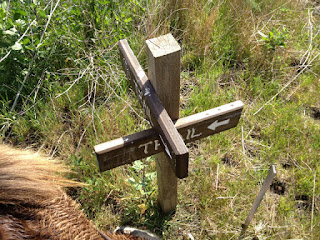 There is always another day and another trail.