A trek from The Boyd Ranch into the BLM land in the canyons above. 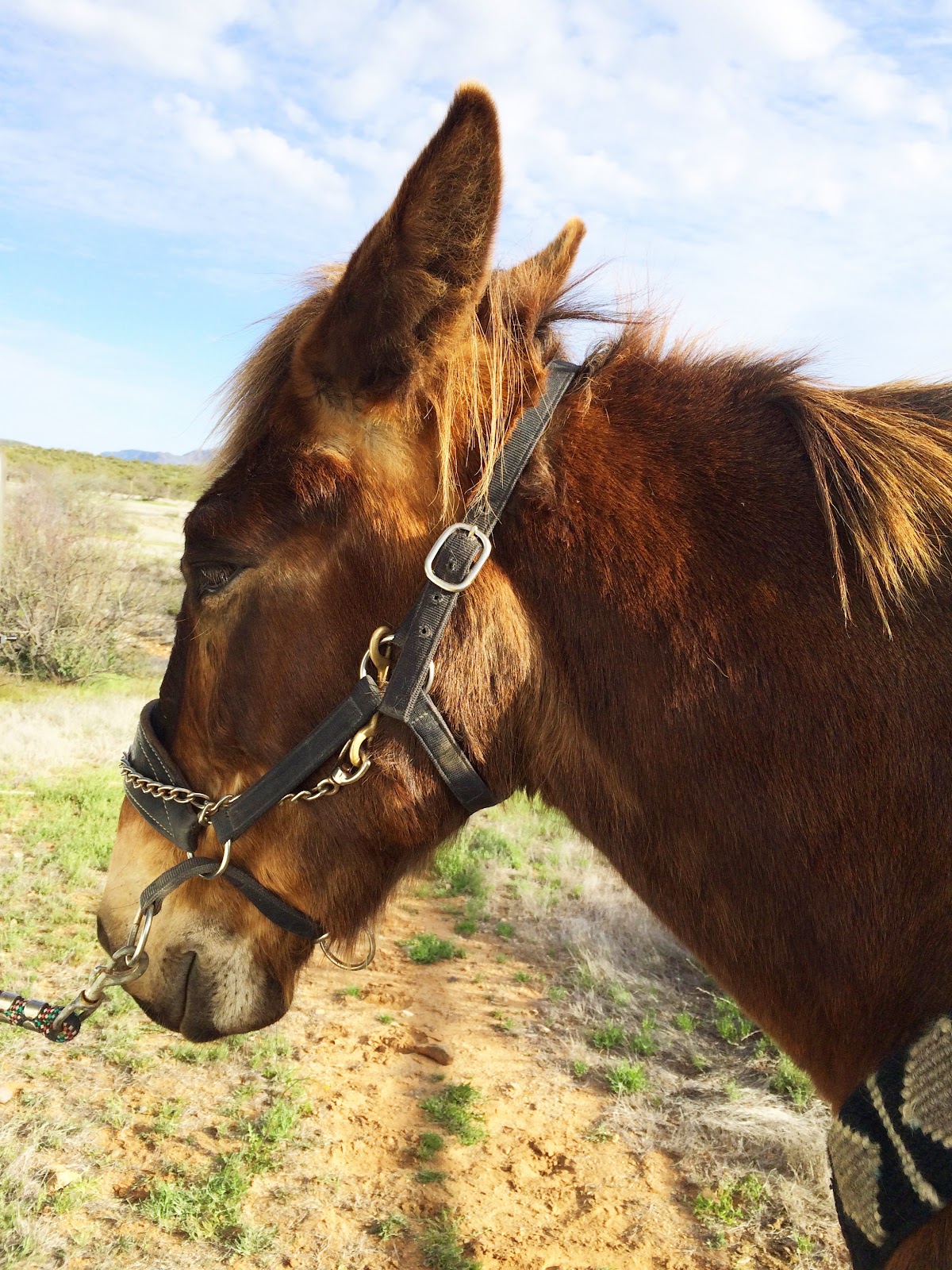 March 12 2015 Tobe and I did our first ever trip together to Arizona to attend
The Boyd Ranch Mule Ride.
60 animals and their riders attended,  mostly mules but a few horses too.
Here's Tobe contemplating the landscape we are soon to explore. 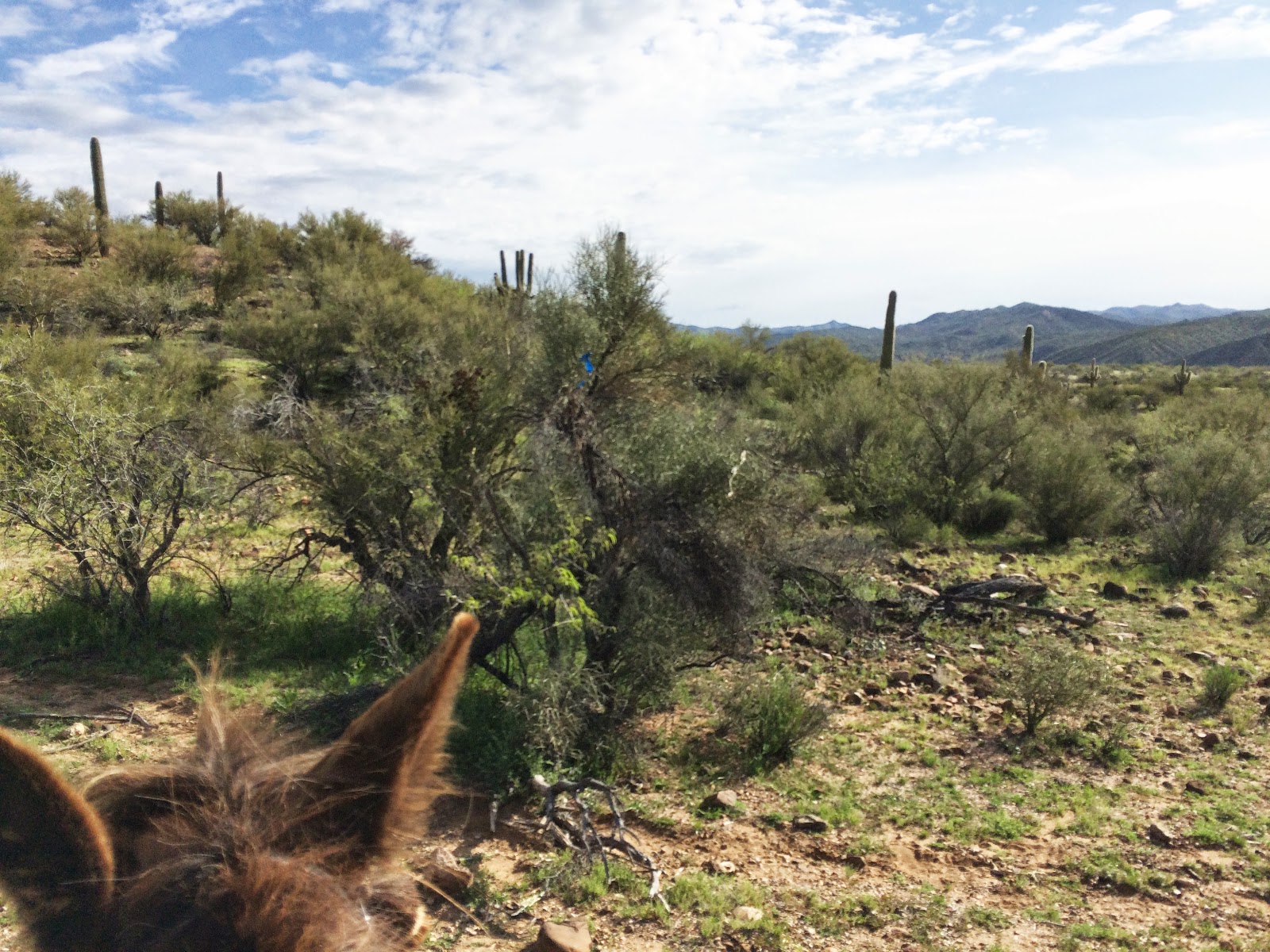 It is a stark and beautiful place, the only signs of the hands of humans are slightly visible trails leading through the cactus. 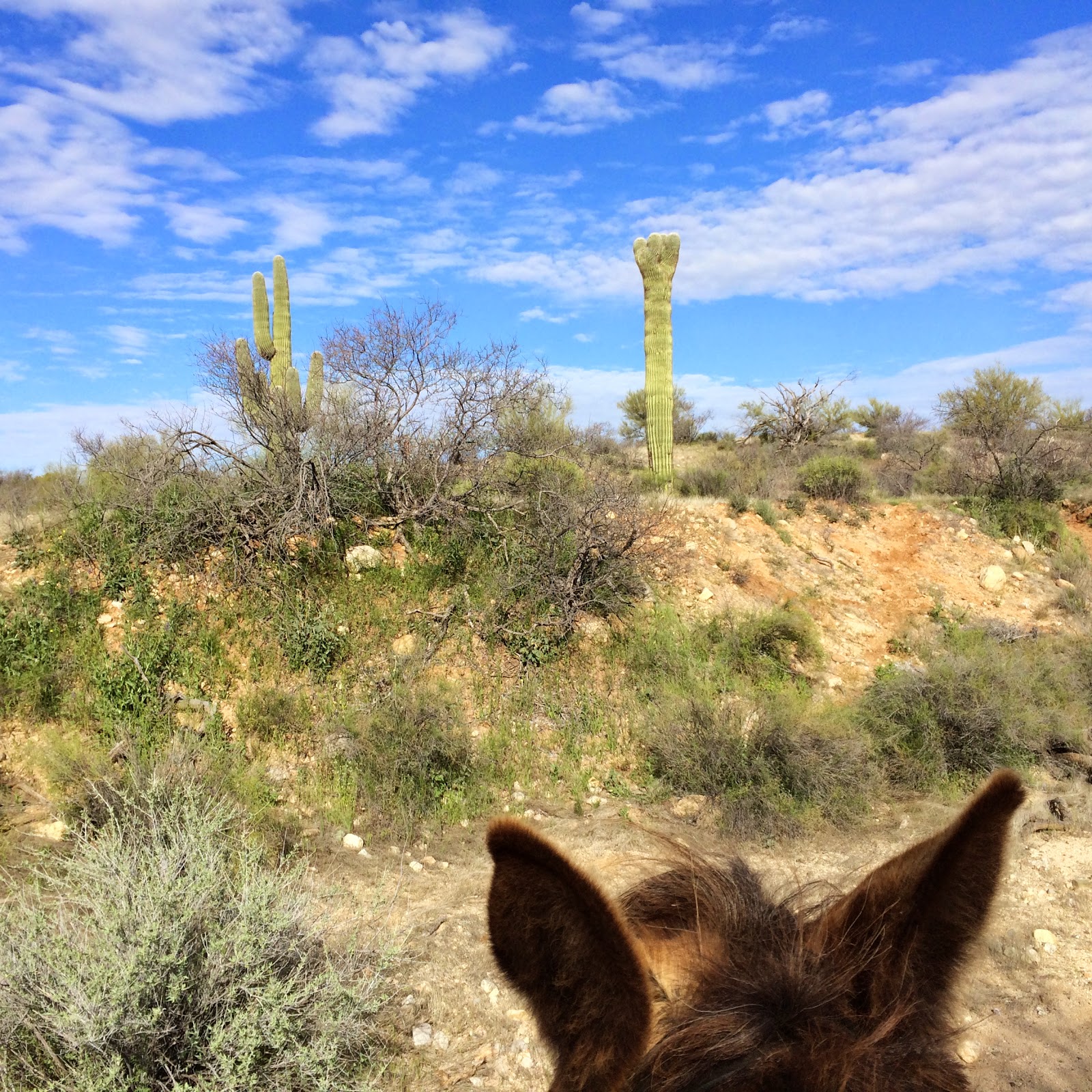 The saguaro are the most impressive of the cactus in the landscape, growing to great heights against the skyline. No two are identical. These two show a more typical one on the left branching into arms, and the more rare form on the right starting to form a "crown." The scientific name is Carnegiea gigantea and they can grow to be over 70 feet tall. 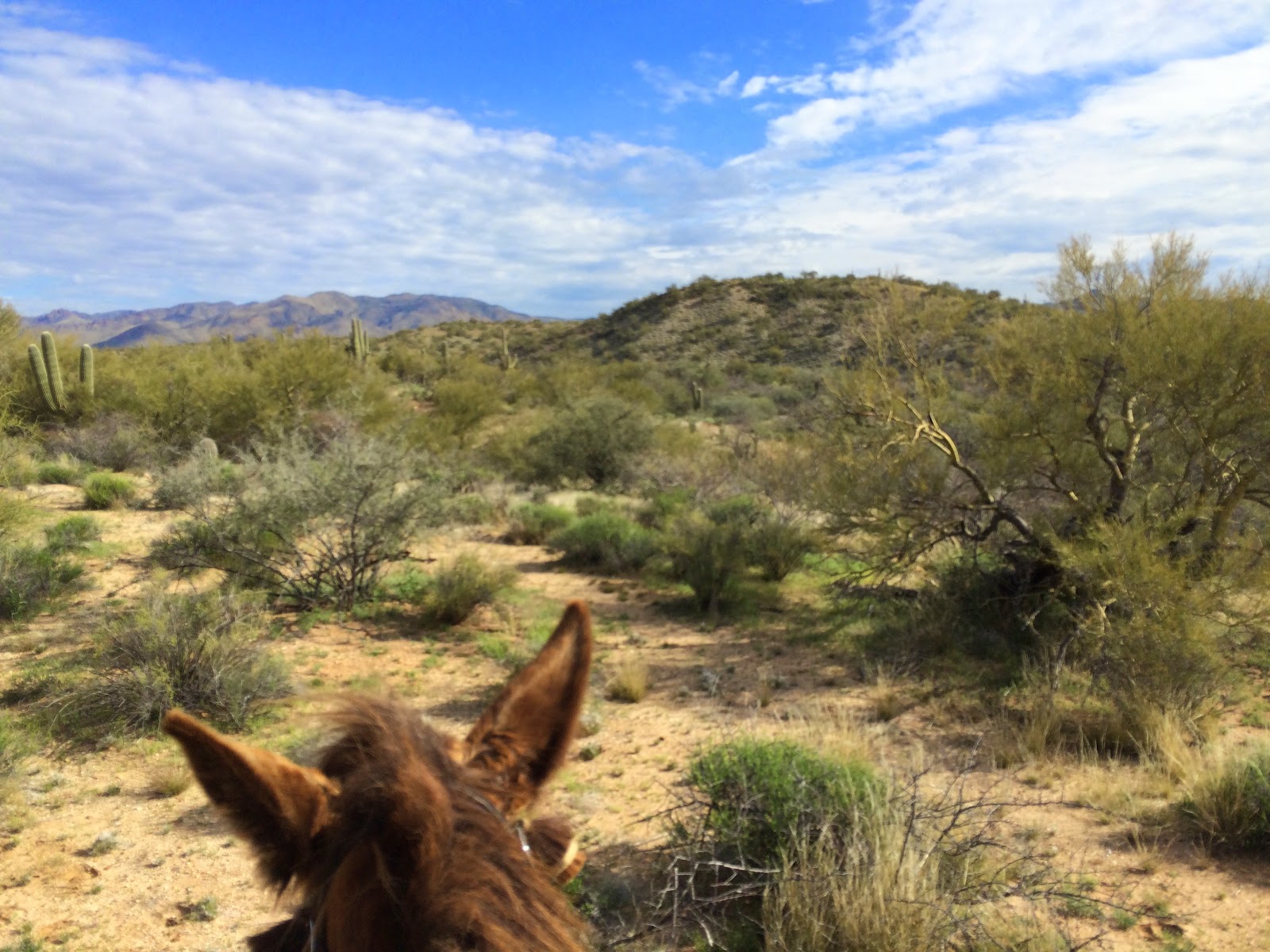 The sky gave a bit of cloud cover as we slowly proceeded through the stark landscape. 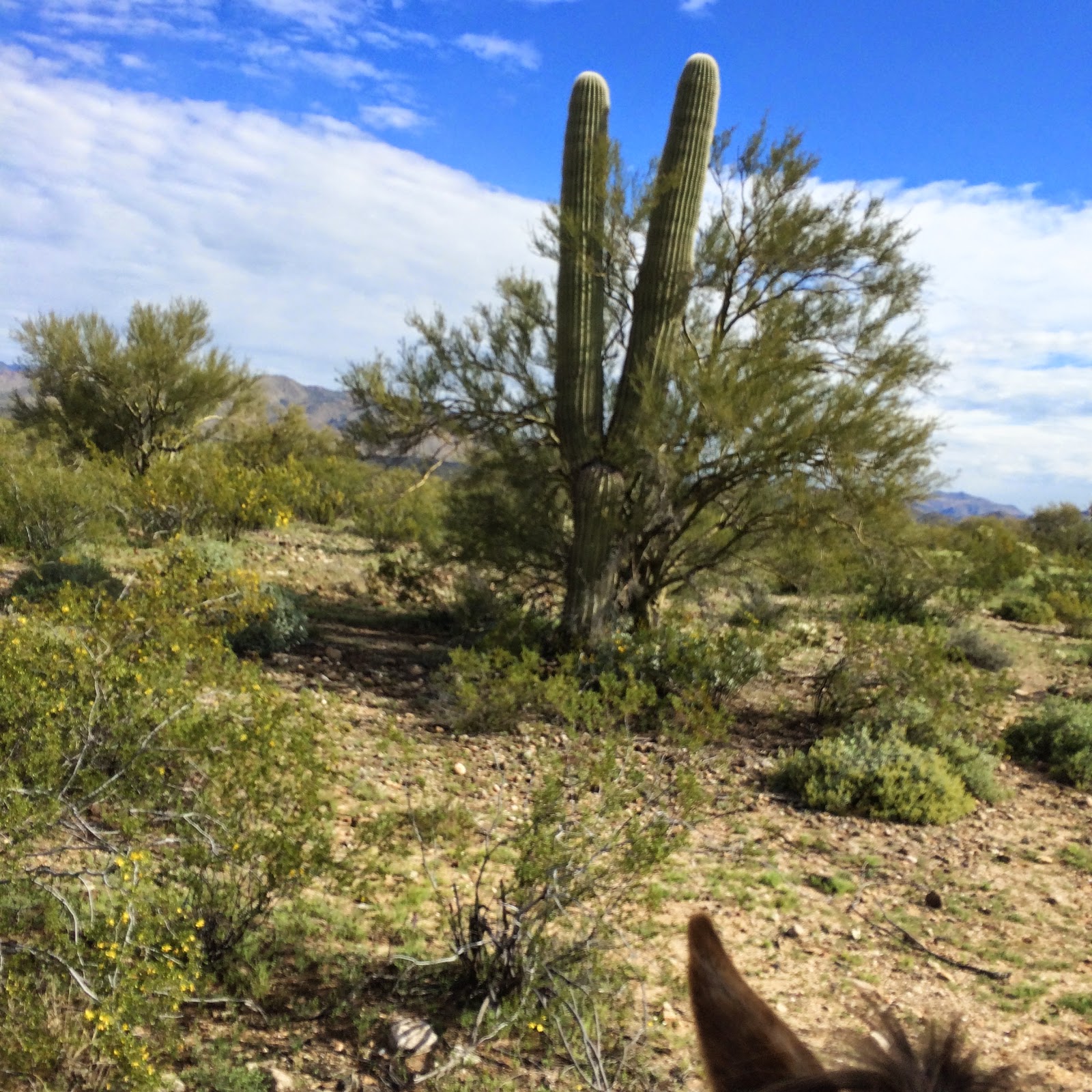 Everywhere the saguaro grows beside with other species, and here is is growing entwined in a creosote bush, Larrea tridentata. Because it was springtime tiny delicate blooms enhanced the view. Many big enough to point out to other riders but too tiny for an iPhone to capture from muleback. 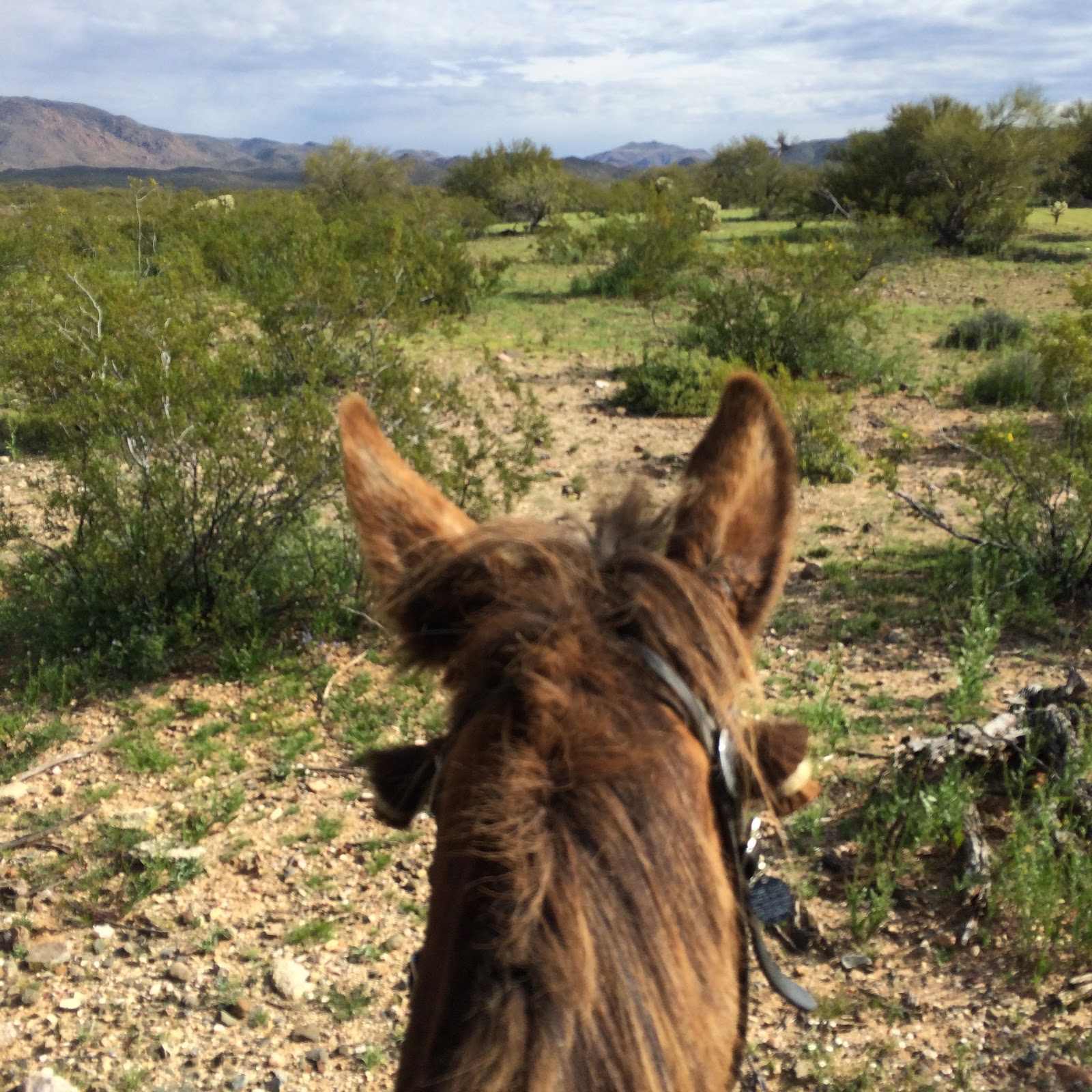 Sometimes a trick of the aquifer would make a section seem quite green, in this place where seasonal rains causing winter floods are often the only precipitation all year. 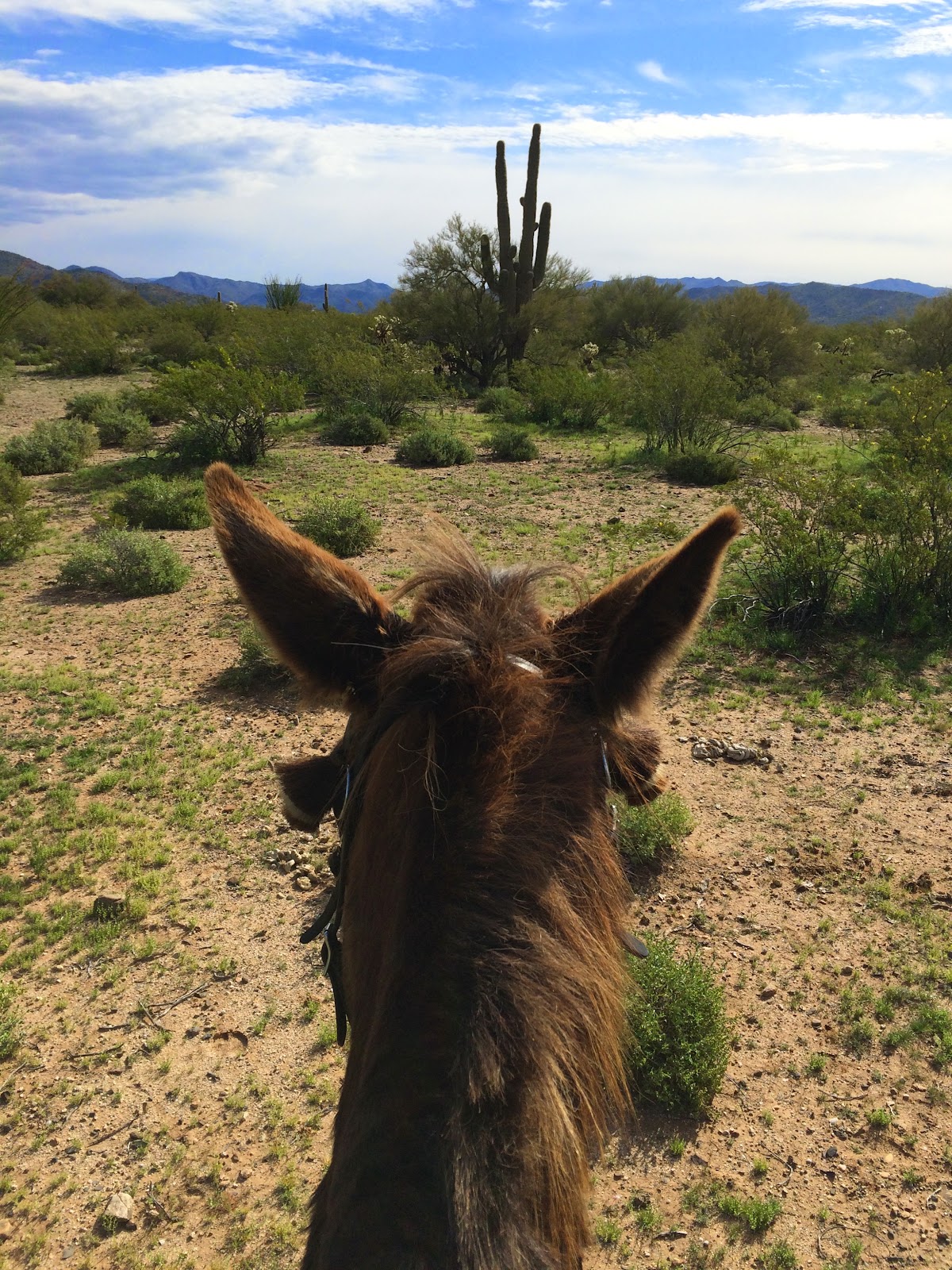 There is just nothing like having a trusty sure-footed mule be your escort to wild places. 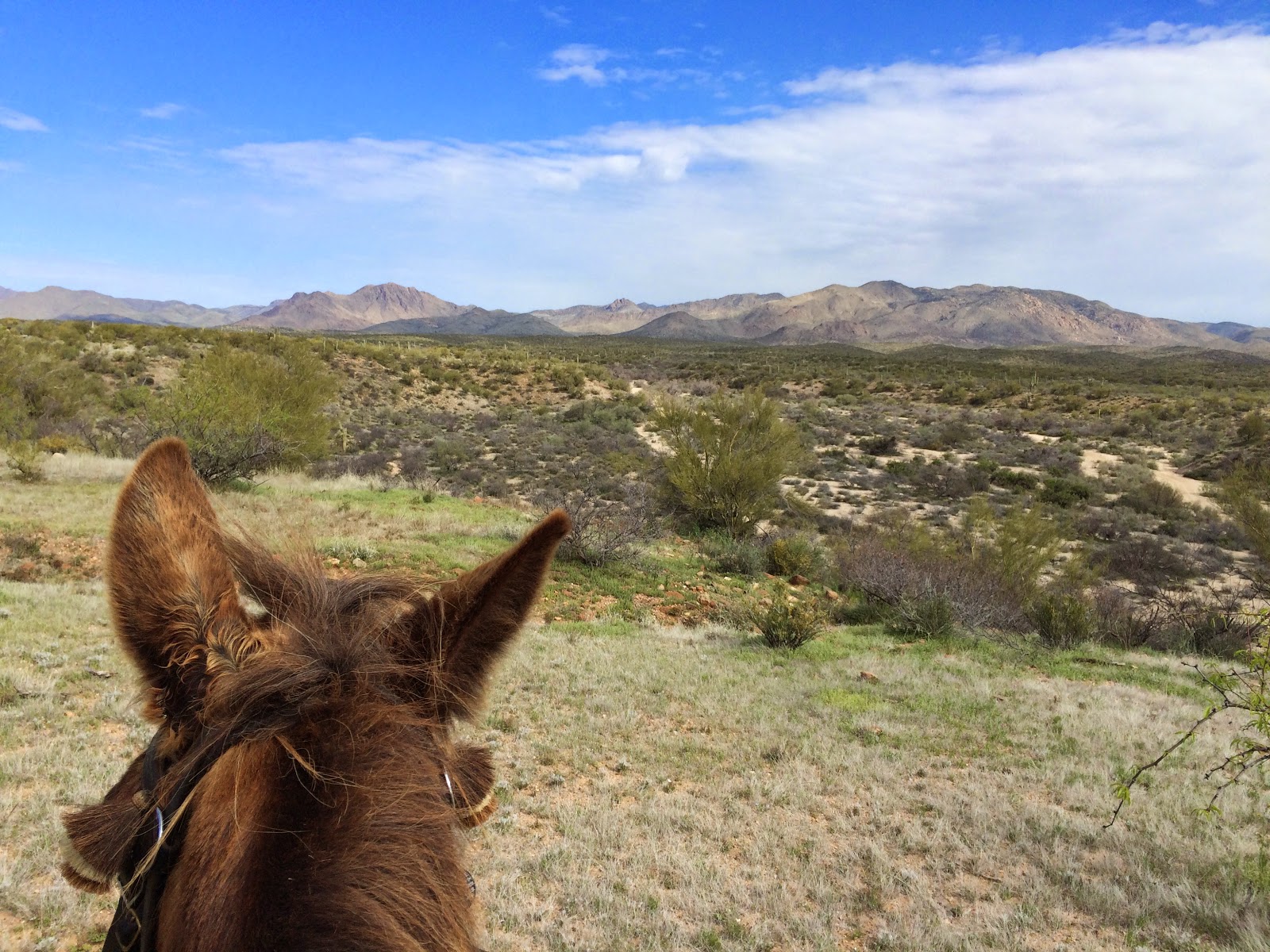 The entirely wild BLM lands stretch out far past the horizon, and we all got a sense for just how difficult crossing these inhospitable canyons and gullies would have been for generations past. It was wonderful that locals took on the task of leading us on the trails which were only marked by tiny strips of plastic ribbon. 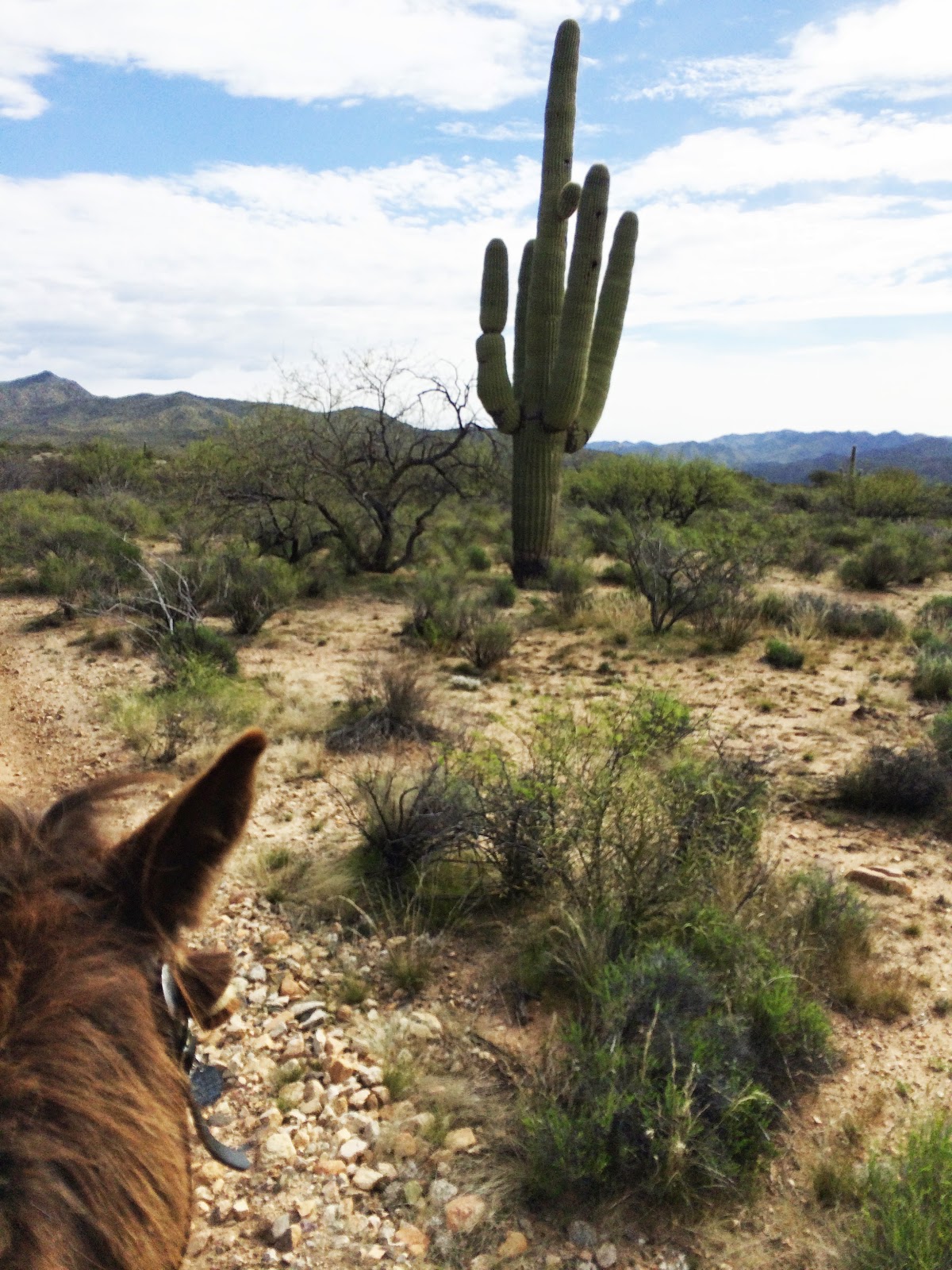 At every turn, another saguaro, each unique, defining the habitat. This one could be 150 years old to have achieved this growth. 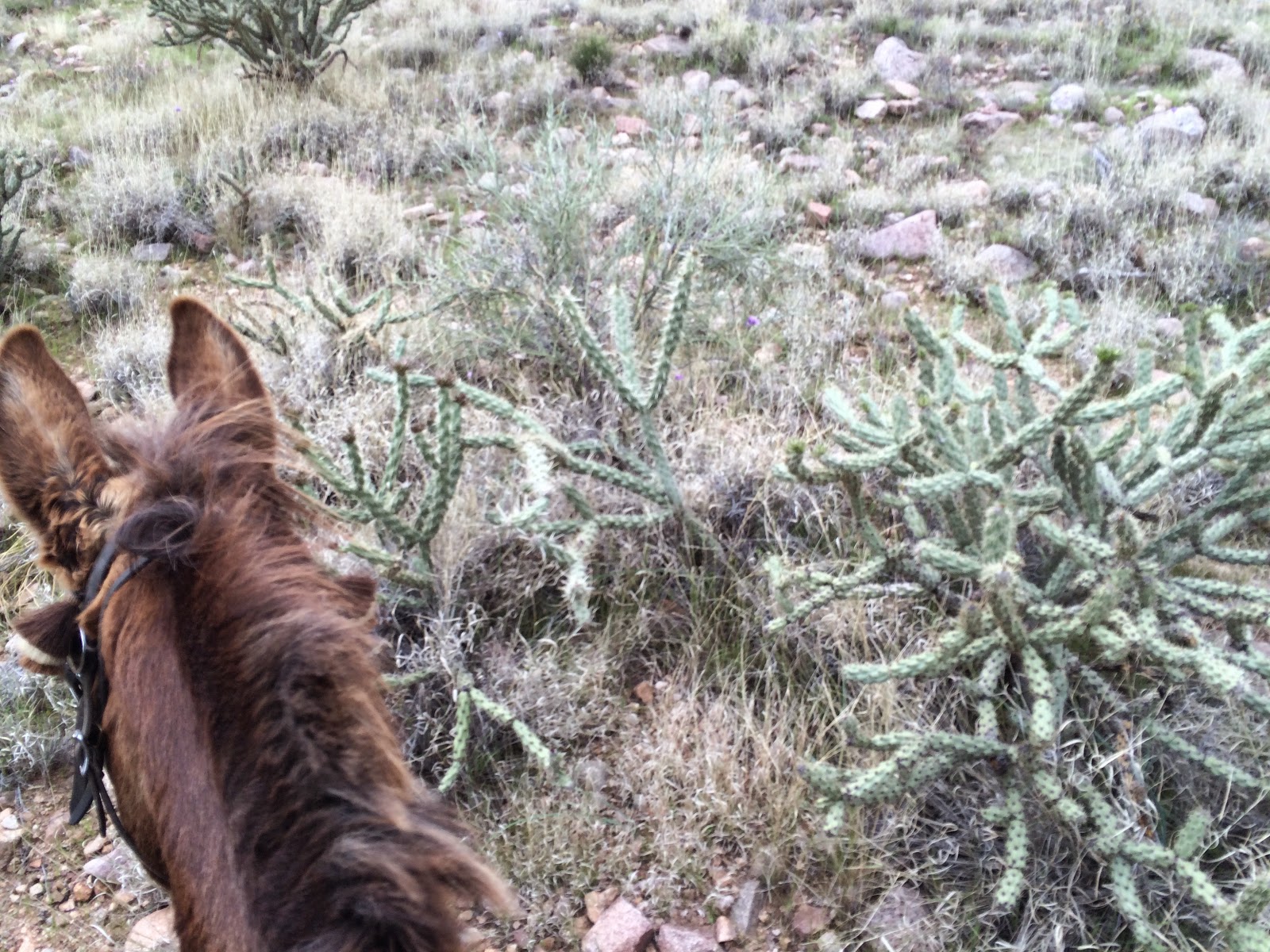 Lots of other cactus too, of course. Gave me many chances to request side-passing, since Tobe's feet track quite narrow compared to my legs wrapped on either side of his prodigious barrel. He was quite capable of making sure HE did not get stuck by any cactus encroaching on the trail, but I often asked for a little more room for ME. 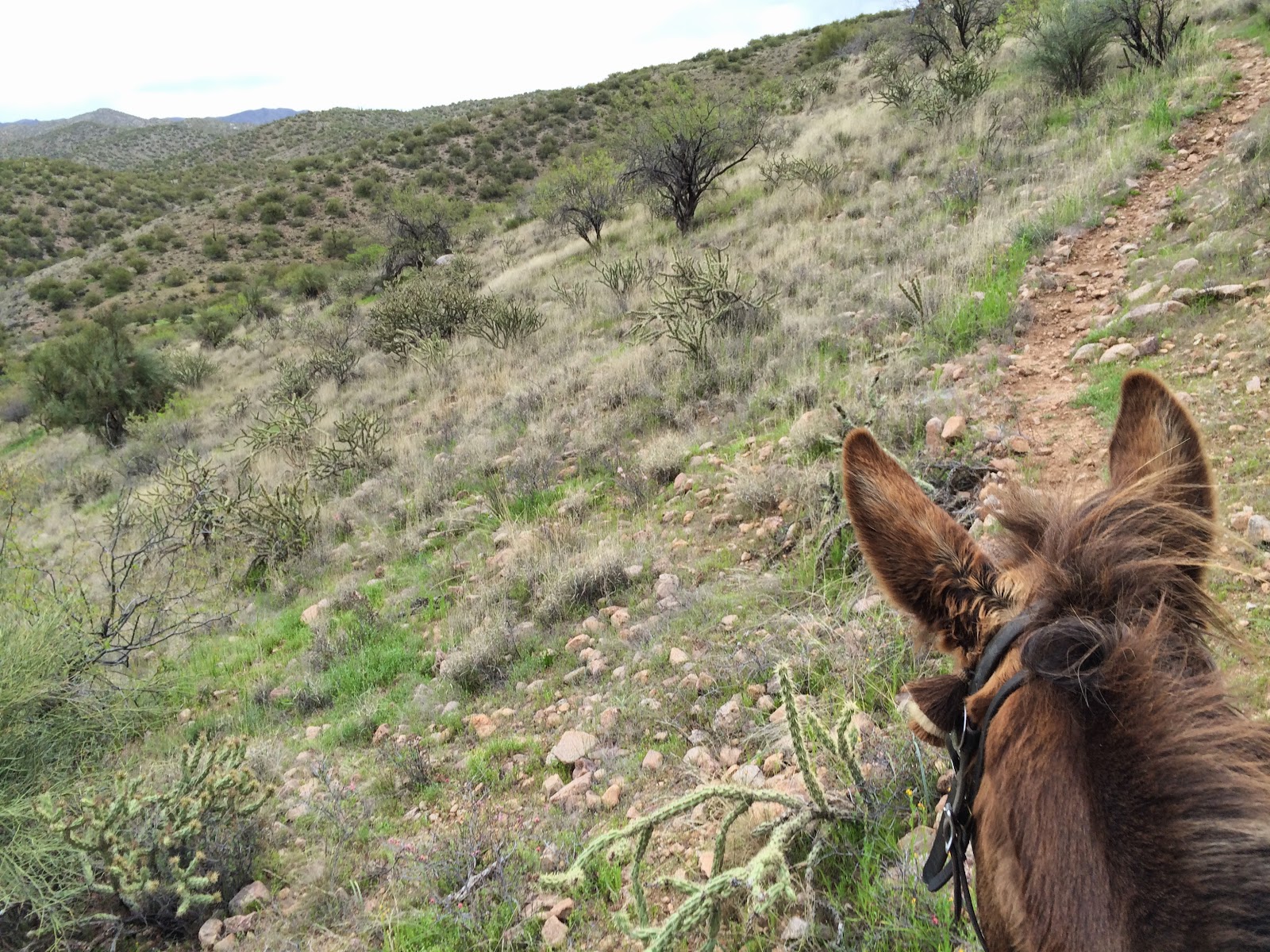 Up and down, out and around, we walked slowly across the beautiful stark vistas. The cactus in the photo above and just to the left of his nose here is Stenocereus Alamosensis, the "octopus cactus," and we did well to avoid it. 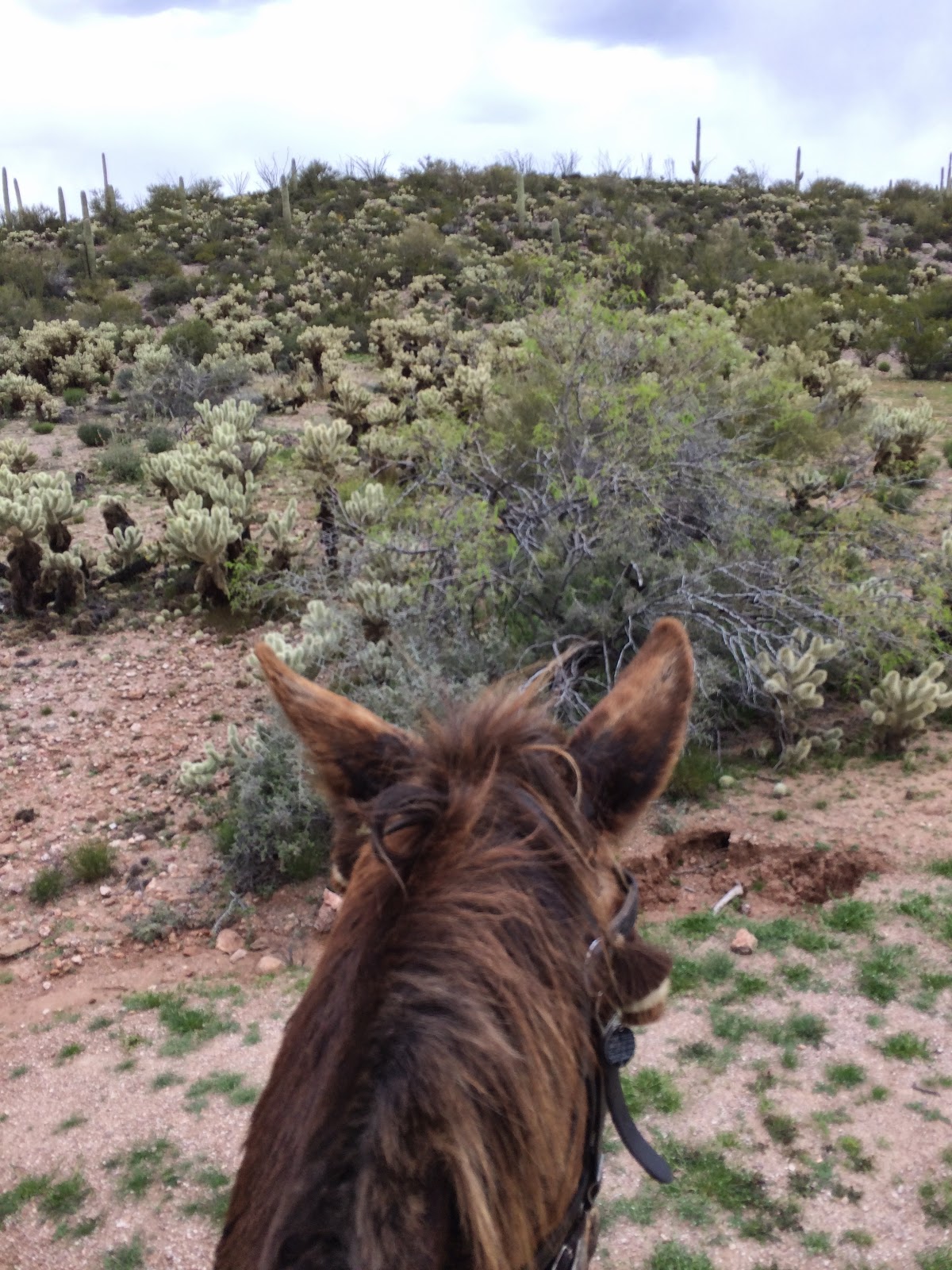 Sometimes an entire hillside would be covered in teddy bear cholla, Cylindropuntia fulgida, also called jumping cholla for its ability to seemingly jump out and attach itself to you as you pass. The tiny balls even detach and roll into the trail, and we were told to take special care to make sure our animals did not step on one and lodge it into the frog of their hoof. 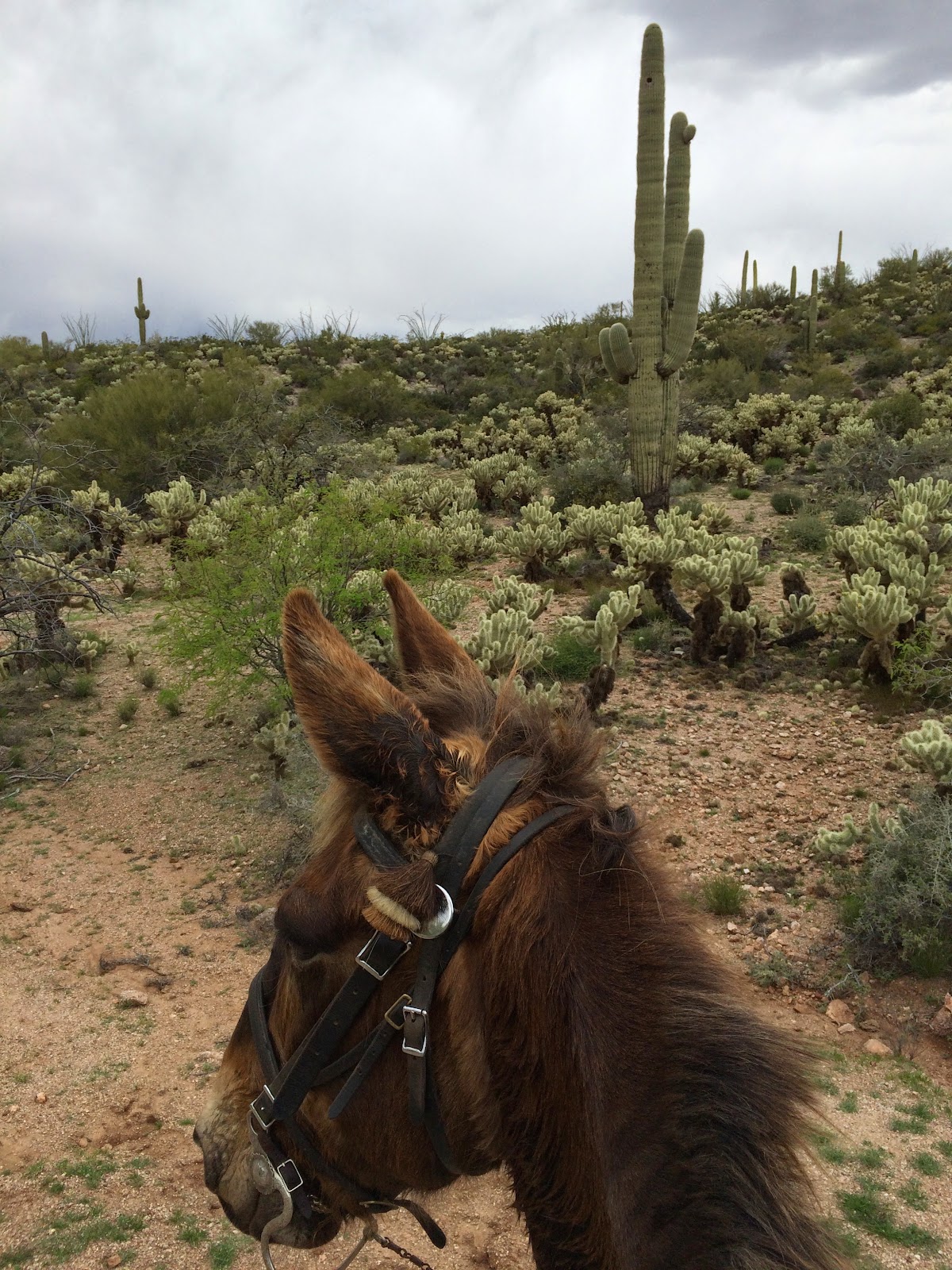 My perceptive and careful mule had no problems. He assiduously scanned the horizon for problems, but thankfully found none. 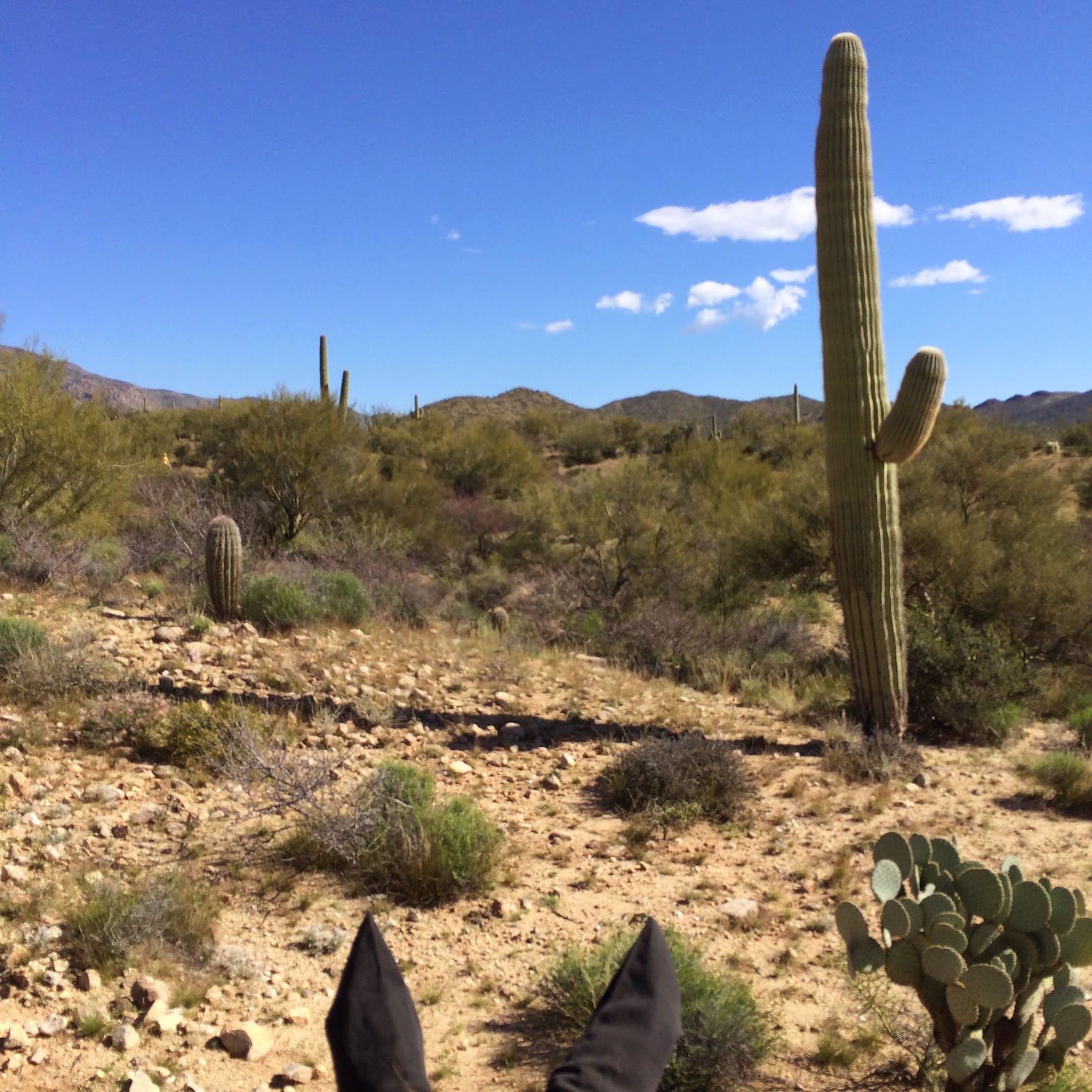 The second day I put him into ear covers, because several moisture-seeking insects flew into his ears the first day, causing a frenzy of head-shaking. The map above shows the trail we followed on this second day ride. 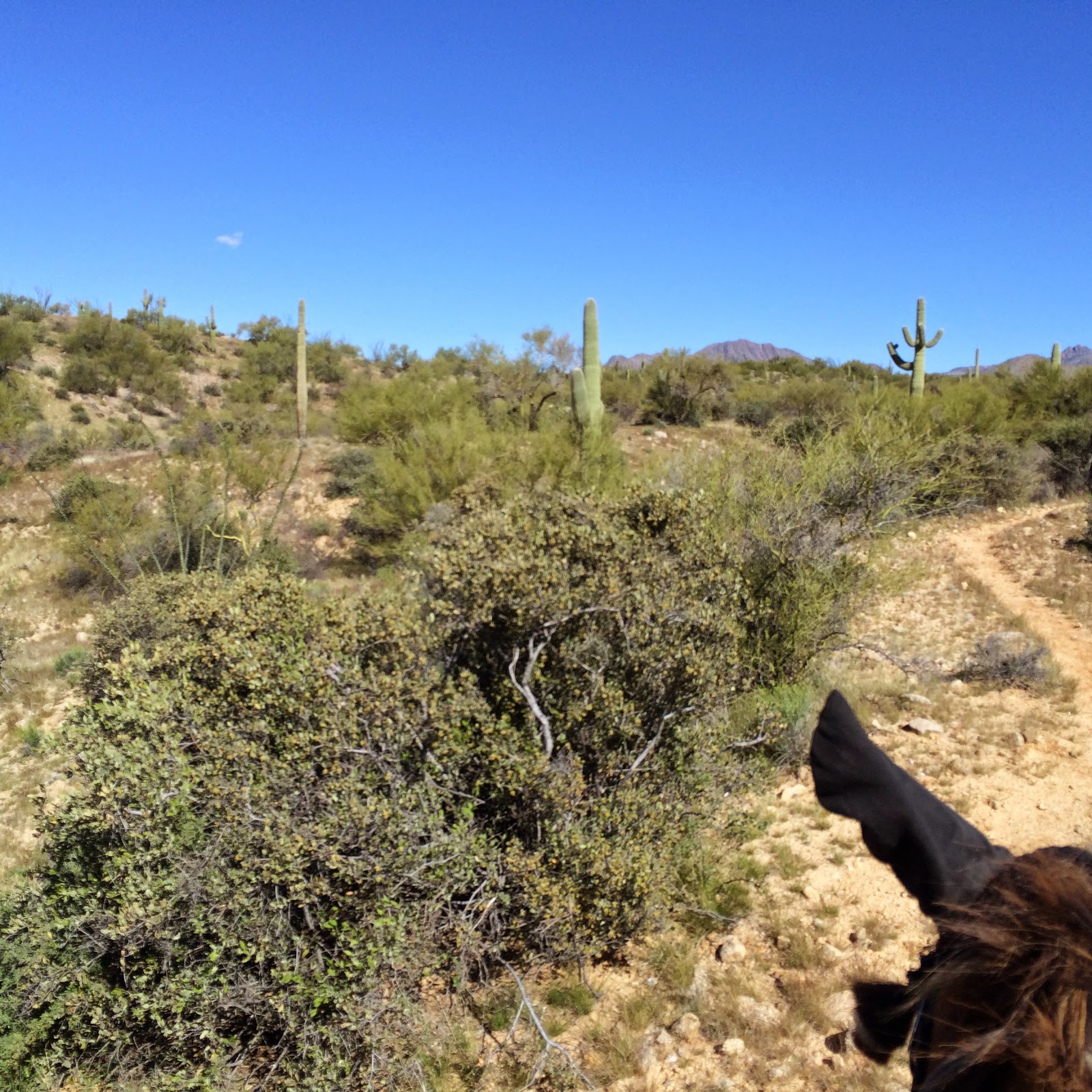 The trails are single-track, but very seldom did that mean a precipice. Even when they did, Tobe and I took them in stride. 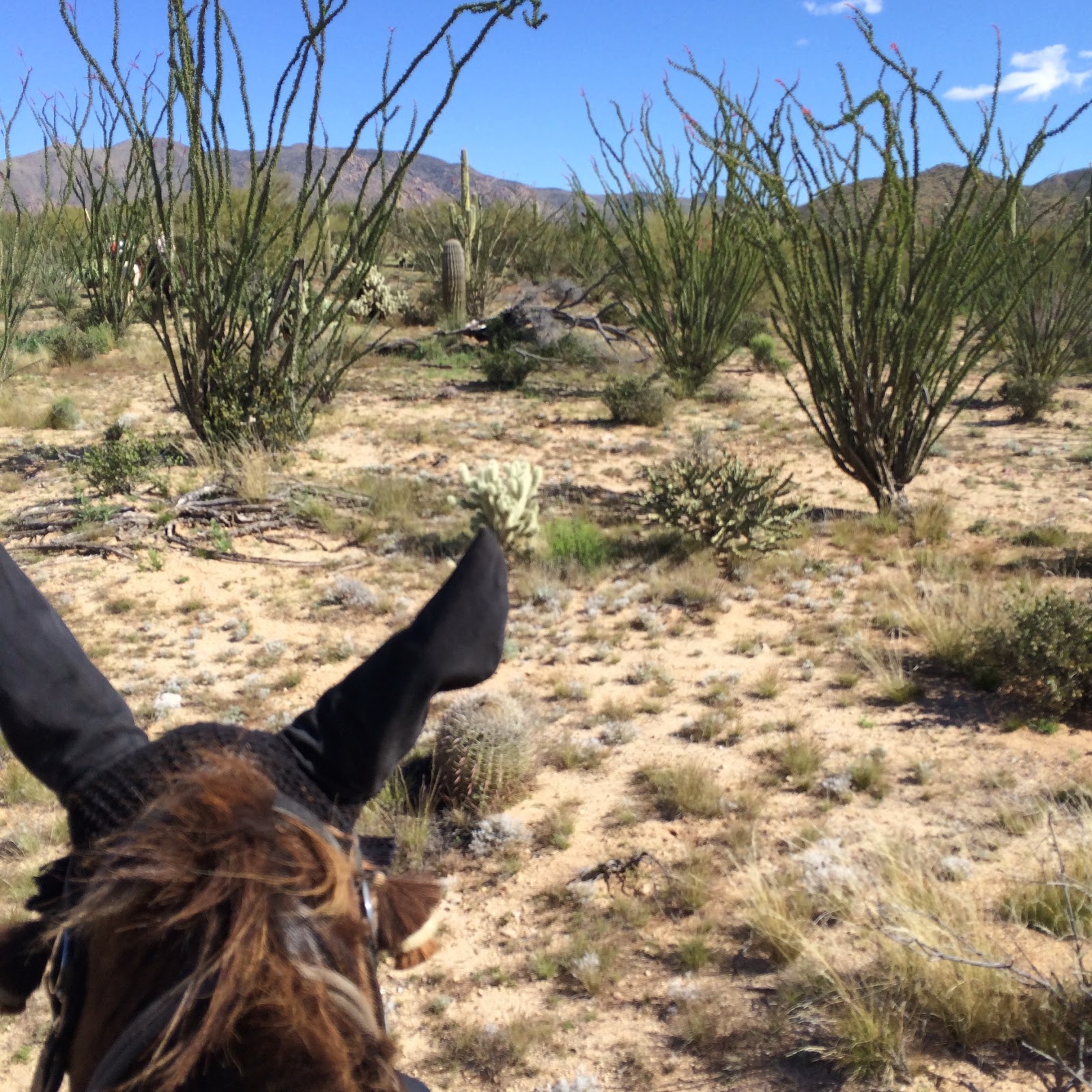 The ocotillo, Fouquieria splendens, is not a true cactus, but lives in the harsh environment happily. Most of the year it is like a bundle of dead spiny sticks, but we were fortunate to see the sticks covered with tiny leaves and coral red/orange blooms on the top of the stalks. 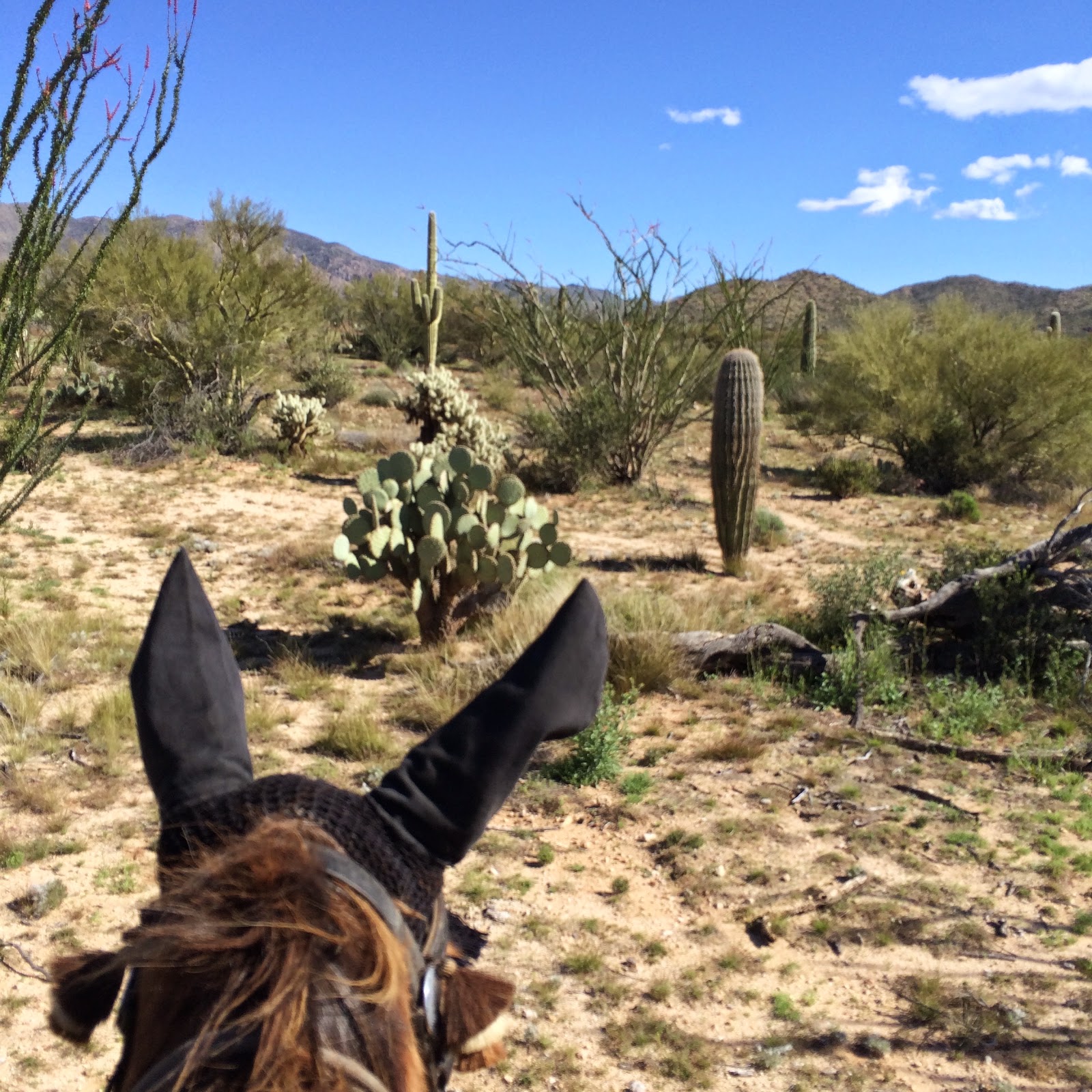 This is a sampler of different cactus, with a flat-leaved prickly pear, in the genus Opuntia, between Tobe's ears. An ocotillo is on the left, behind the opuntia is a saguaro, and on the right is a younger saguaro that has not yet begun to branch out. 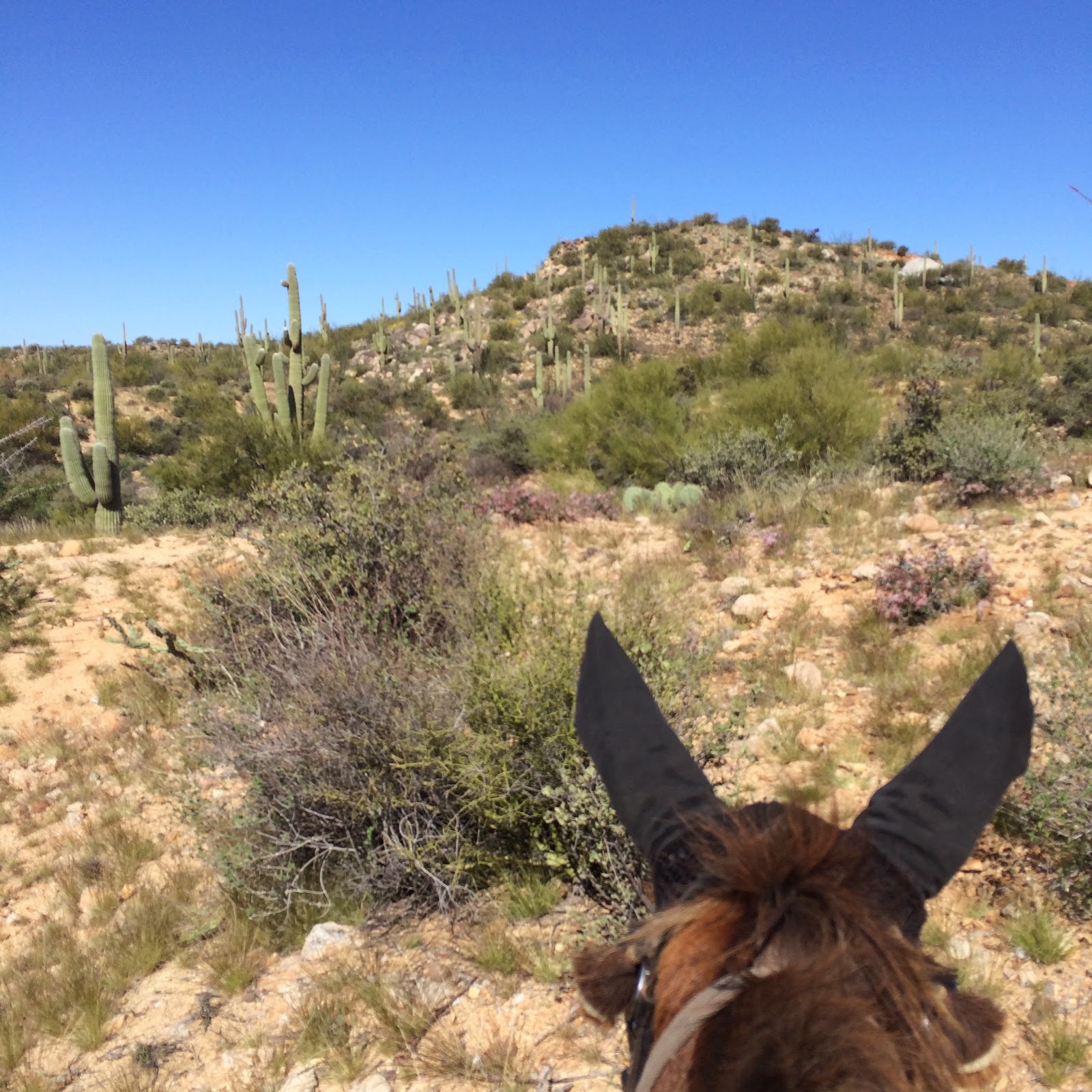 Looking up into the hillsides the intricacy that is so sharp at close range becomes a carpet of patterns, equal measures forbidding and compelling. 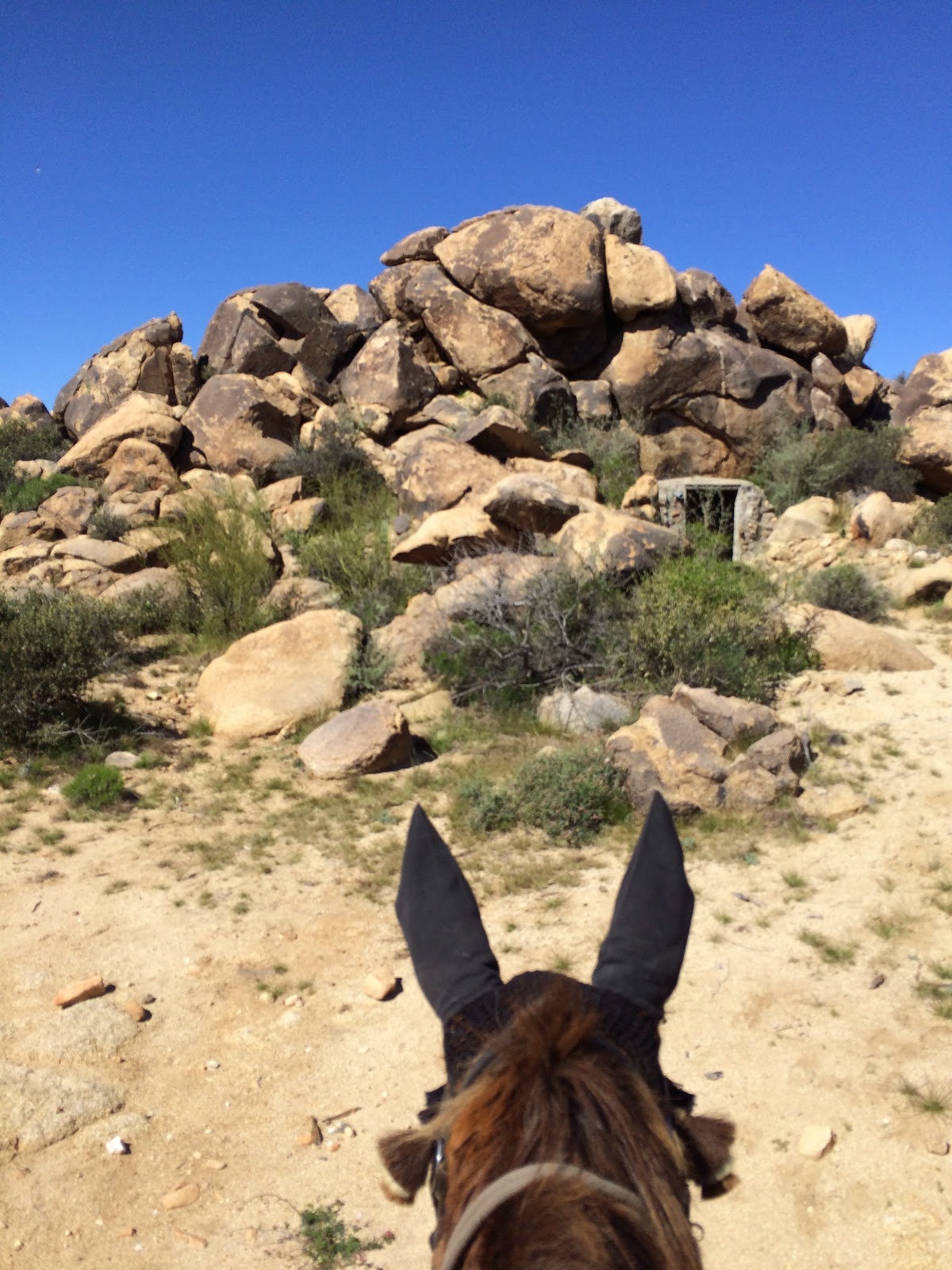 This rock formation houses a long-deserted mine, and we were not tempted to enter and explore it. It could be the Lost Dutchman mine, then again it could collapse and be a very permanent resting place. 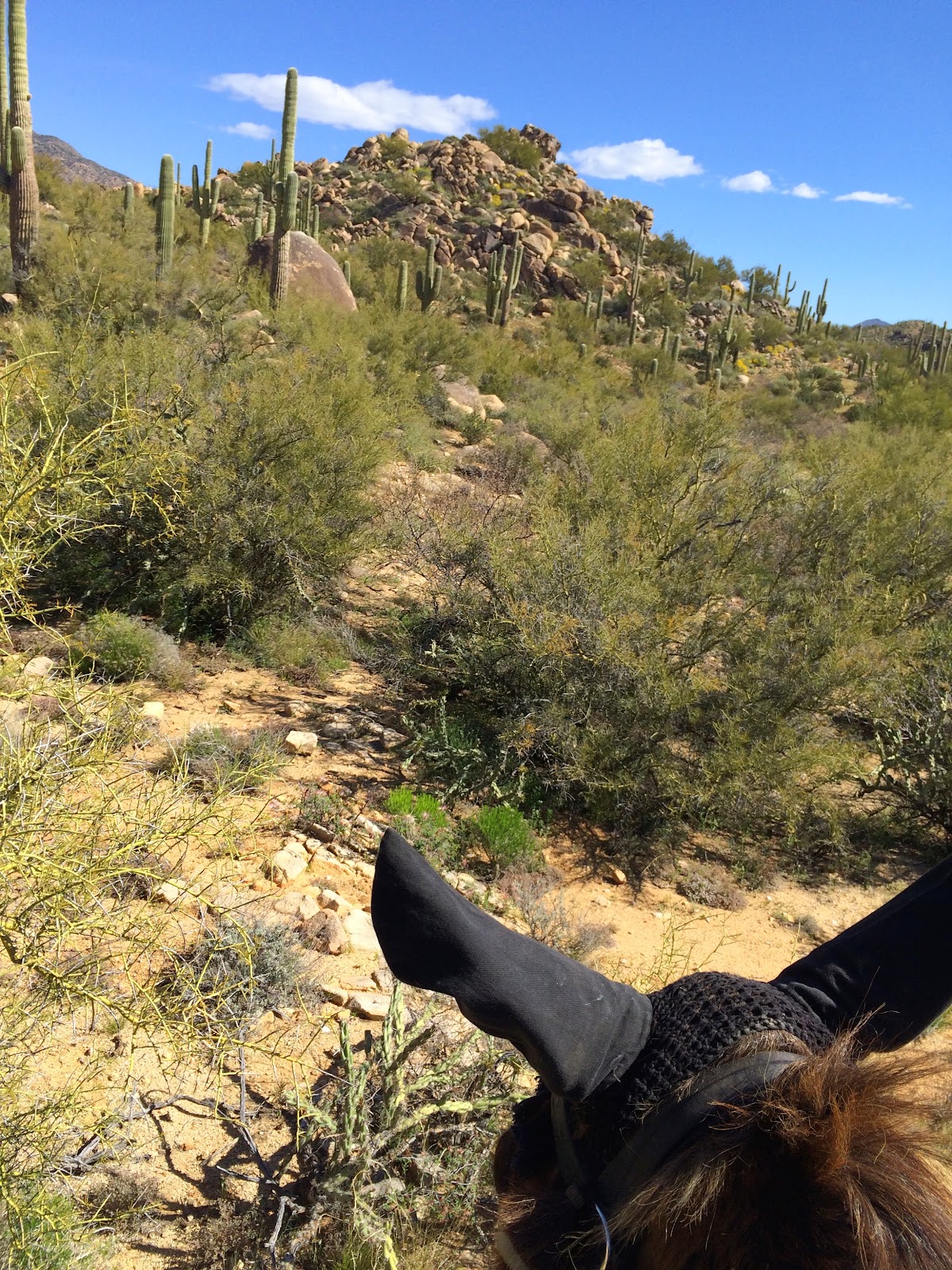 Sometimes the trail was just a bare scraping of the earth... 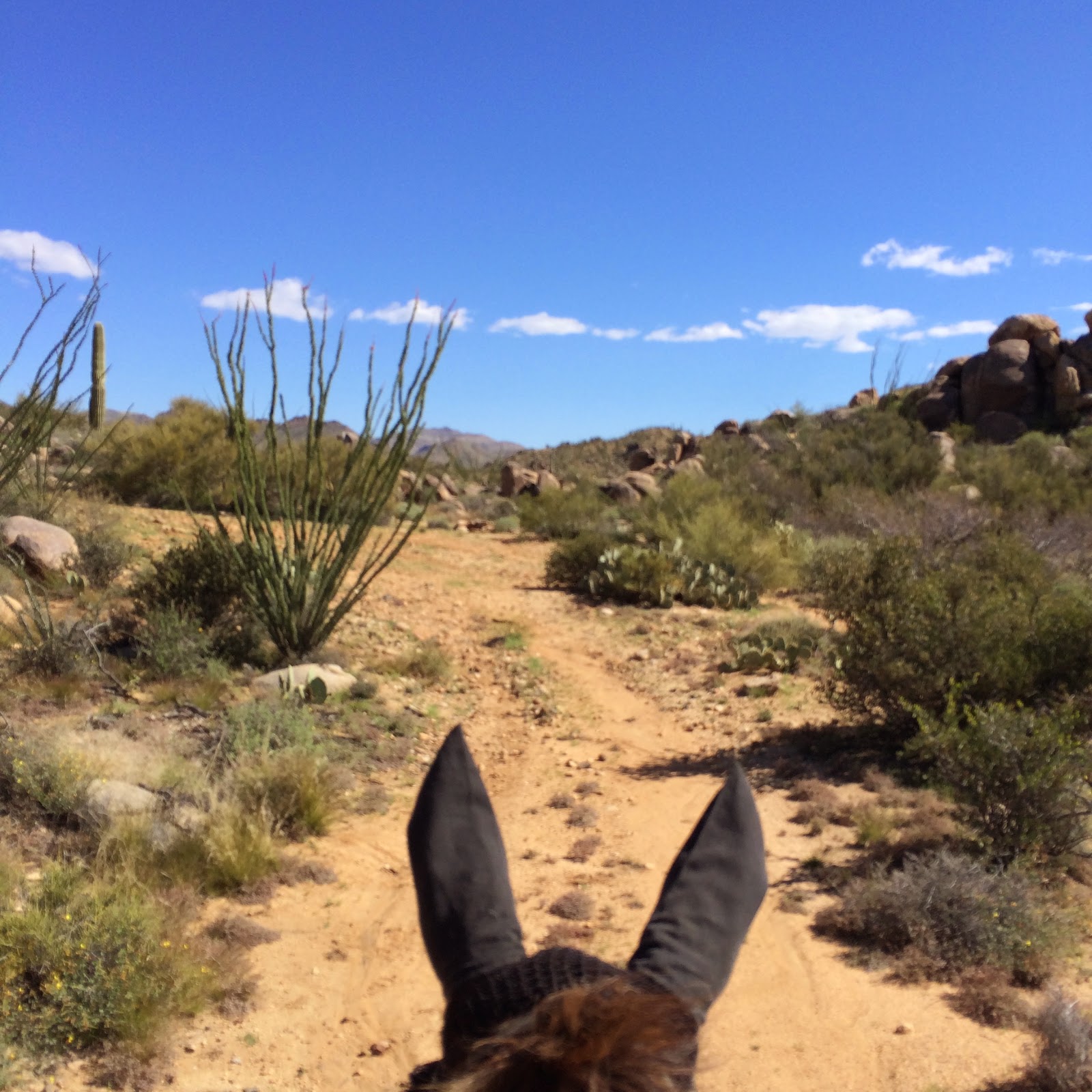 Other times the trail showed that BLM personnel come back in ATVs to check stock tanks that provide water for desert creatures. The roads are presumably also kept passable for emergency rescue operations.

Taking a panoramic photo from muleback is a bit difficult.

This one, taken at a stock tank clearing, was easier since Tobe and I were gratefully resting under a tree for shade. 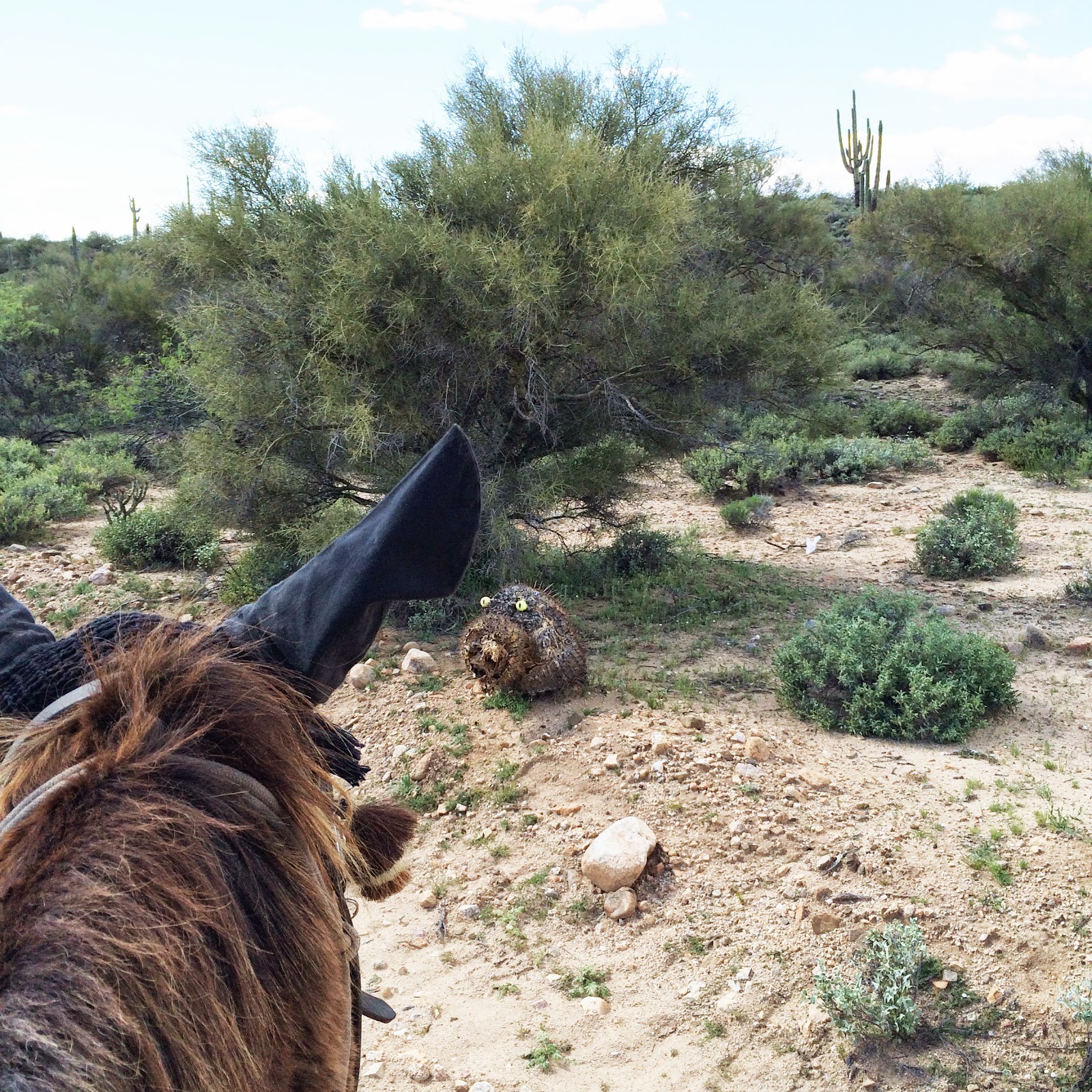 As we neared the Boyd Ranch at the end of the ride, we saw this dead cactus with ping pong ball eyes in it. The scariest critter on the ride. 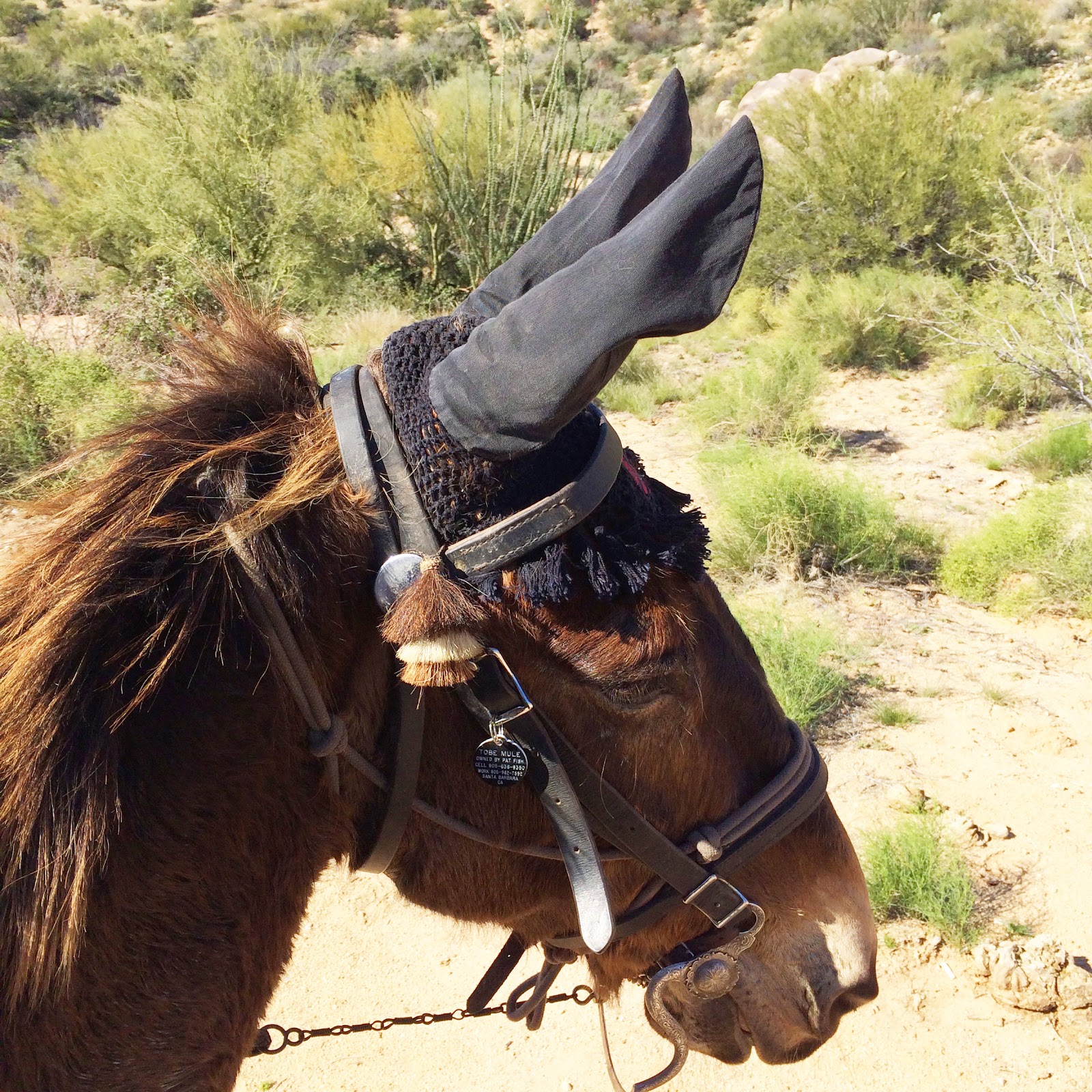 But Tobe was unperturbed. He could sense that we were close to camp, and he was ready for a good drink of water, tasty hay, and a roll in the sand to shake off the aches of a 15 mile ride with mule yoga.

And a desert sunset descended quickly and the end came to a lovely day.