Skofield Park in loops and then up Rattlesnake Canyon to the fences, then back down Gibraltar Road and back to the Park.


A hot summer Sunday, a trio of intrepid equines and equestrians, and an exploration of the edge of the urban area in the foothills of the mountains above Santa Barbara.
3.6 miles in 90 minutes, 600 foot altitude gain 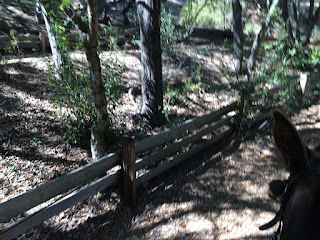 We started out in Skofield Park, and as you can see on the map we warmed up the steeds by walking in loops through the shady trees. Ms F and Levi Morgan led the way, this park was her playground when she was growing up a horse-crazy girl. She told us about how the Vistadores used to gather in this park and tie their horses to these rails as they prepared for their annual ride up to Santa Ynez. 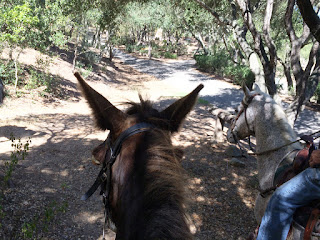 Tobe was happy to be back on the trail with Levi, and Mr G and Zo Arabian set the pace. You can always count on Zo to want to get there faster. And like his owner, he's a bit of a show-off. 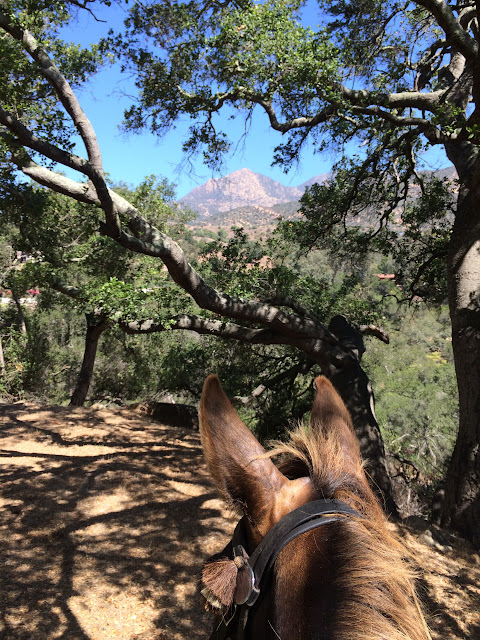 Through the park's ancient live oaks there were glimpses of Gibraltar Peak above. Tobe Mule and I practiced our Cowboy Dressage, and he quite calmly turned in whatever direction I asked to facilitate my photography. He indulges me 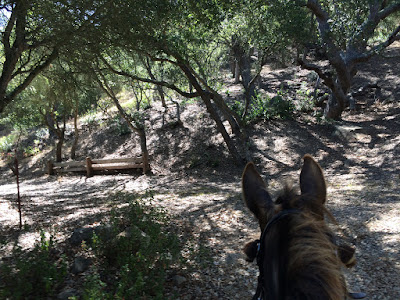 We stayed in the park for quite a while, it was so cool and pleasant and any place I've never ridden before seems like a good time to me. 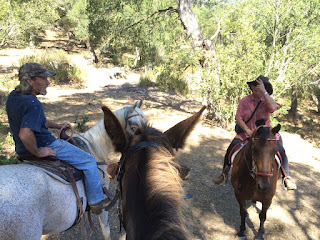 The humans dawdled, playing follow-the-leader and swapping stories as we imagined President Ronald Reagan and all his cronies hanging out in this park, drinking and playing cowboy. 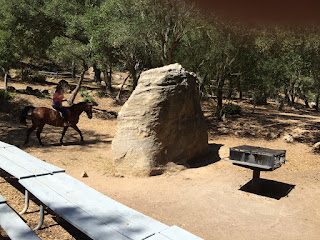 At the bar-b-q area this rock outcropping has tempted generations of kids to climb it, but none of us felt like competing for King of the Hill. We had trails to explore, and even a mule couldn't climb that. 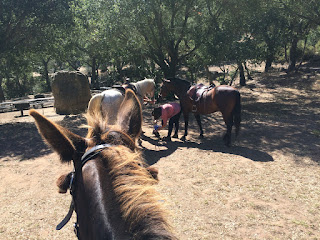 A convenient water spigot with a dog dish made a watering hole for the horses. But Tobe Mule typically refuses water at the beginning of a ride, waiting to see if there will be a creek to taste along the way. It is their ability to go a full day without water, in arduous circumstances, that made mules the best stock for the Westward Expansion. 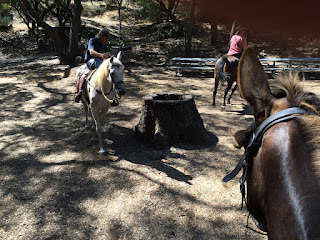 This gigantic stump made a good agility exercise,  so we round-robined it for a while. Me, the kid who never played a sport or threw a ball, and doing these equine games amuses me no end. 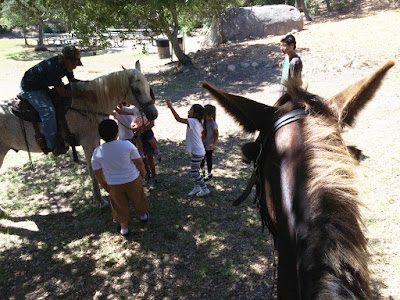 And then we ran into a gaggle of little kids. They acted like the circus had come to town, so of course we made their day by letting them interact with the animals. Kids make me a bit nervous, but Mr G is a dad, so he is very careful and tells the kids how to pet Zo Arabian. Tobe and I are a bit aloof.
One thing I always notice, Mexican kids like these notice that Tobe is different, and usually at least one of them will correctly identify him as a mule. A MULA as they call it. A feminine word for a big male animals. Go figure. Anglo kids almost always think he's a horse. 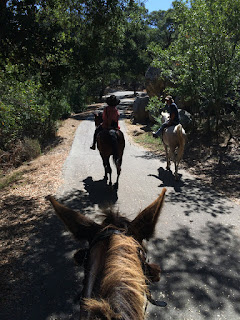 After the kid delay I was ready to go climb a hill, so we followed the roads up and out of the park. 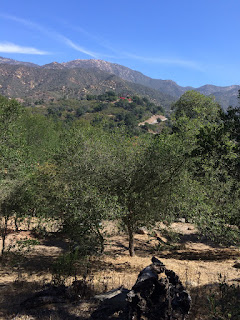 But on the horizon skyline the mountains beckoned. Just doesn't make sense to stay in the foothills when you can ride into the chaparral above. Tobe Mule was getting over an abscess in a hoof, so it was time to see if it was going to chip on rocks or be the sturdy barefoot son-of-donkey hoof I always count on. 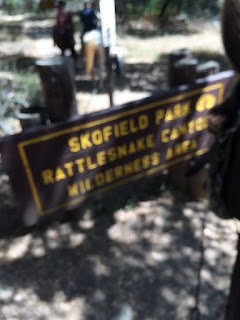 The sign is blurry, we were in motion getting off a street and onto the trailhead.  It says:
SKOFIELD PARK, RATTLESNAKE CANYON WILDERNESS AREA 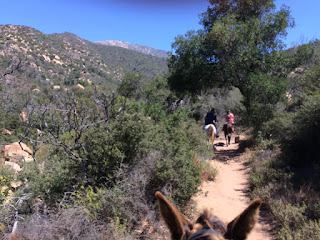 And up we go. The trail is used by a lot of equestrians and today we saw a lot of healthy people hiking along. 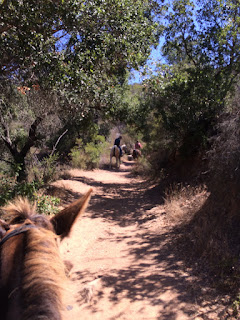 Tobe and I, well, we bring up the rear a lot on rides.  He's a very deliberate fellow, and likes to take his time placing his feet just so.  Mules have a way of pacing themselves so in the long run they will get you there without exhausting themselves. 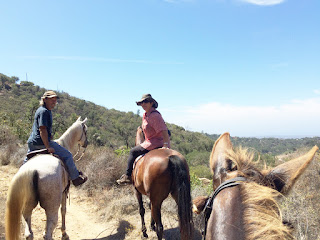 At the peak of the trail we could look out over the foothills all the way down to the Pacific Ocean and the jewel of a town below. 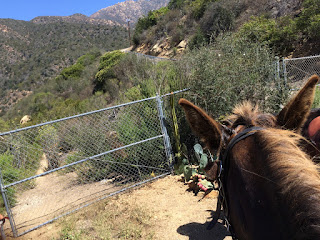 Gates have been placed at the trail's end, but not locked. 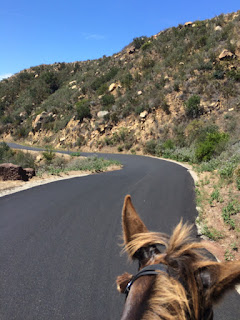 The folks I was with said they wanted to walk back down Gibraltar Road, which was recently repaved to a pristine smooth asphalt surface. I figured that sounded OK by me. I always like to go back by a different route than I came. 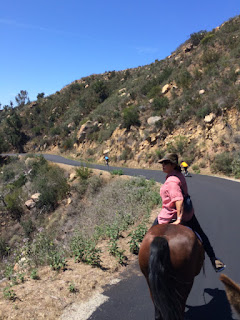 But there were BIKES.  Because the road is now so smooth a lot of speed demon bike racers have someone drive them to the top of the hill and then come back down it going amazingly fast, I swear 40-50mph. You can see the bikes in front of us if you tap and enlarge the photo, this was the closest I could capture them in a picture. Ms F is turning around to ask Mr G why he wasn't announcing "Bikes!" when he saw them coming. He made the very sensible reply that he didn't want ME to have time to get scared!!! THAT was quite brilliant. Tobe simply didn't CARE that bicycles were whizzing past 4 feet from him, and I never had time to tense up and cue him to think that they were a problem. 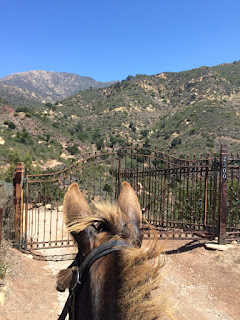 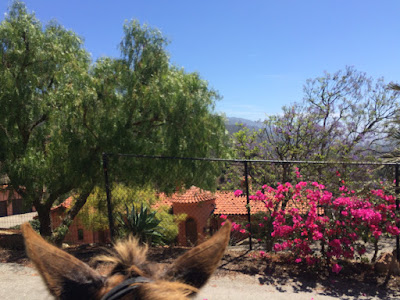 This newly built house has a finely made terra cotta tile roof. And one heck of a view. 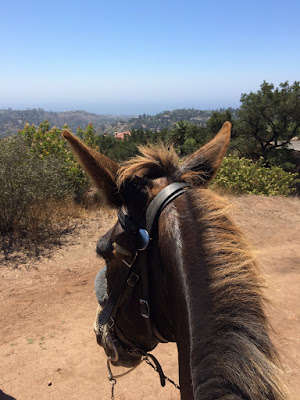 We stopped for one more rest before heading down into the suburban housing area at the base of the mountain,  the haze over the sea masking the islands. Once again Tobe Mule carried me to a place I had never been, and we shared a  fine ride with friends. 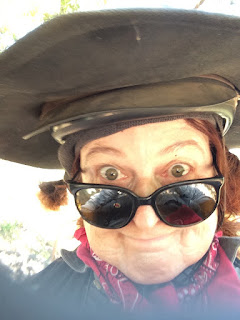 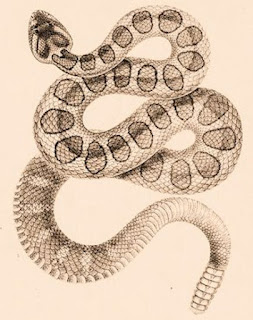 And NO, we did NOT see any rattlesnakes on the Rattlesnake Canyon trail.  Not this time!