An easy stroll through the Malibu Creek State Park riding through oak woodlands and open meadows. Very easy, well maintained trails, and ending back at the Western Town in Paramount Ranch. 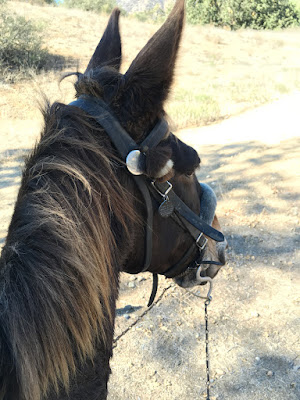 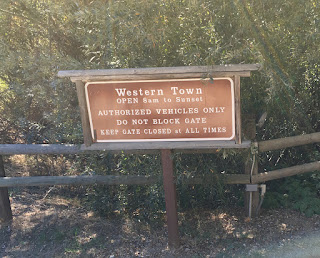 Tobe was ready for a new adventure.
We drove an hour South and parked near the entrance to the Western Town.

I have a history there. When I was a kid growing up in Los Angeles I sometimes did extra work, and some of the Westerns were filmed here. It is on the old Rancho Las Virgenes and used to belong to Paramount Pictures, but when I was doing my bit walk-ons it was rented out by independent film companies as an all purpose movie ranch. 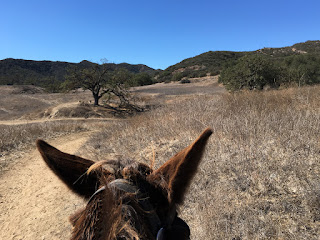 But first, we ride. It was a sunny afternoon, no sign of the impending El Niño yet, so we take the mules and head off uphill to the landscape that stood in for Texas or Arizona or California in so many classic westerns. 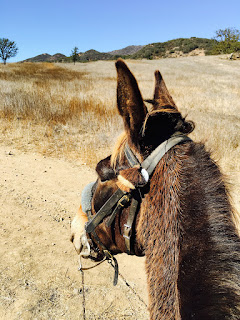 A mule's role is not to wonder why, but he just can't help himself. 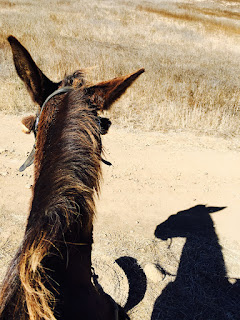 You're never alone with a contemplative long eared mount. Lurking alongside is their skeptical shadow, the one who tempts them to think they are superior to mere humans. Sometimes they succumb to this fancy. 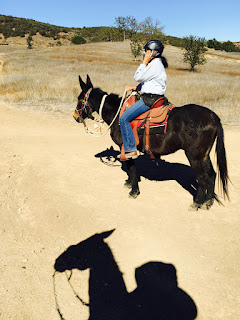 Our ride companions were the lovely Miss Darla Mula, and her owner Mrs CF. Darla, it must be said, was a bit of a tease. She'd sidle over to Tobe and give him a seductive lip waggle, and just when the smitten fellow leaned in for a kiss she'd lunge for a nip. He didn't know what to think of that at all. Mrs CF was fielding phone calls and being efficient even on the trail, but Tobe and I were untethered, iPhone turned only into a camera and a GPS map track generator. 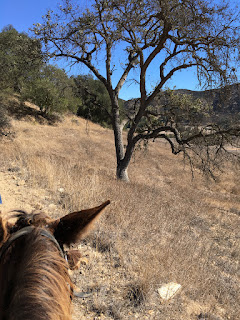 There were magnificent California Live Oaks everywhere, but most of the grasses and bushes were extremely dried out. The oaks are ancient, and have weathered droughts before with their very deep tap roots. 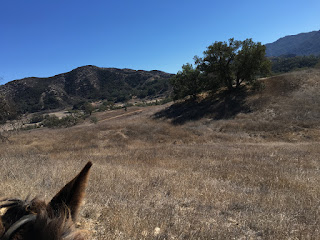 Sentinel oaks are the most significant plant in the landscape, and the landmarks by which trails are navigated. 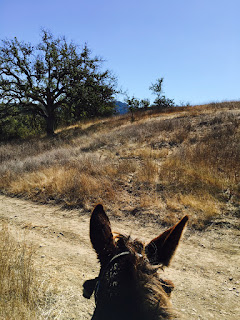 So we wound our way up and down, enjoying conversation and the views. Finally we came to a spot where we stopped to cool the animals in the shade of an oak and there on the far horizon was the famous LadyFace Mountain. 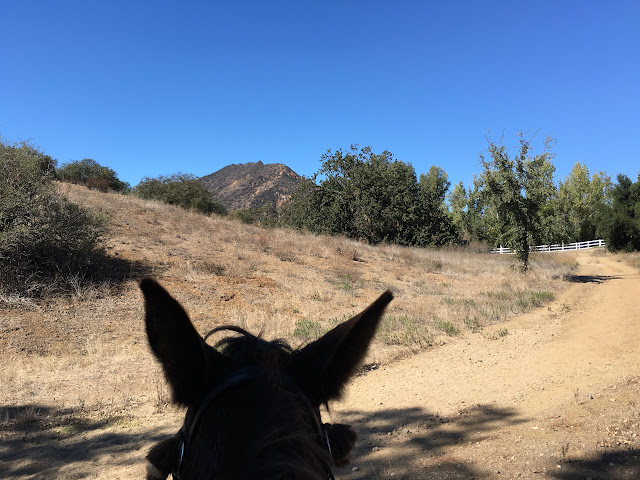 This is a bit of an optical stretch, but check out the silhouette on the top of the mountain directly between Tobe's ears. On the right is her forehead and hair, then following left see her nose, lips, and chin. I'd seen it labeled on the map, but was surprised when Mrs CF told me to look up and there it was.
But speaking of illusion, it was time to wend our way back to the Western Town. 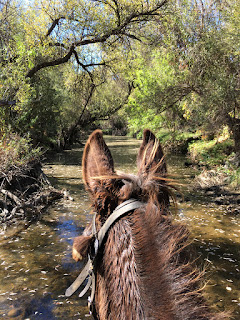 Amazingly, Malibu Creek was filled with water. Back up in Santa Barbara the drought has made everything bone dry, but here there was lots for a thirsty mule to drink and cool his hooves.
Then, crossing into the town, it was showtime. 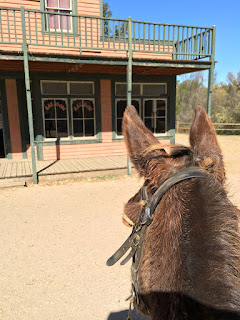 Tobe didn't need a drink at the saloon, but we might have. 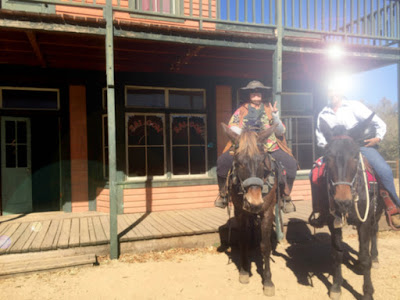 Clearly the tourist to whom we handed a phone to and asked them to take our souvenir portrait had already bellied up to the bar inside for a few stiff shots. 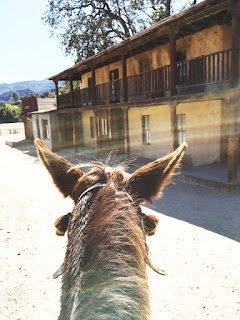 This second story balcony has probably had thousands of stuntmen tumble off it after being shot, and been the scene of yearning glances between many star-crossed lovers. 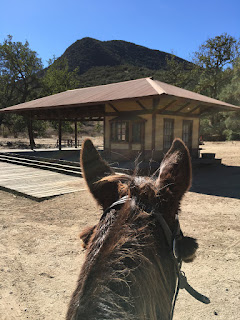 And how many arrivals and departures at this little train depot are branded in our psyches, how many times as children did these buildings house our fantasies of the futures we would live. 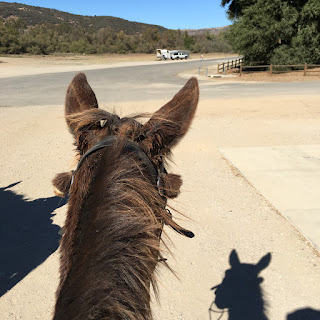 For now, our chariot awaits. My SubUrban and BrenderUp will ferry Tobe and I back to Santa Barbara, after a pleasant stroll and the chance to meet a new Mule Girl. We will return.