A lovely trail ride from the Rancho Oso Thousand Trails Resort up and across the Santa Ynez River to the Upper Oso Campground.
5.13 miles in 2 hours, an easy ramble through the wildness of Spring in full bloom. 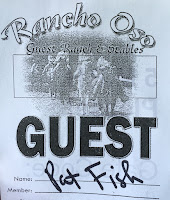 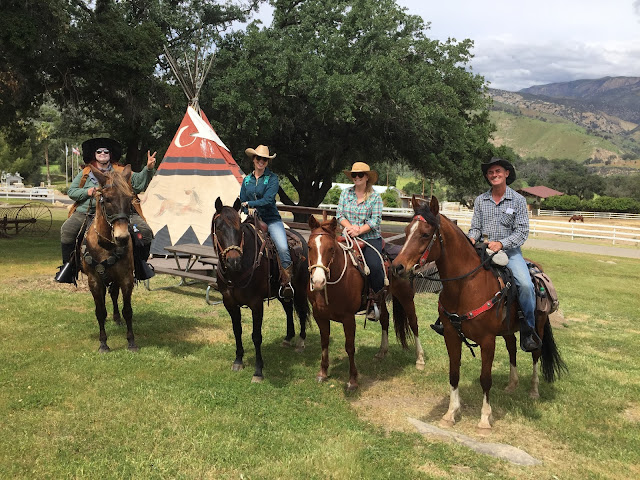 What could be better than a trail ride on a fine Spring Day?
Here's the crew, starting from the left:
Pat on Tobe Mule, Molly on Woodrow Mustang, Tiffany on Penny QuarterHorse, and Bob on Ananda Arabian.
As you can see we are open minded equine enthusiasts, all breeds welcome..... if they can keep up! 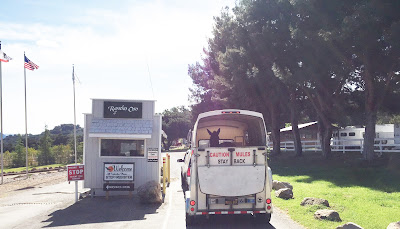 We carravanned up to Rancho Oso, paid the nominal day-use fee, and tacked up and headed out. Since I know the trails, I got to lead on and be Trail Boss. 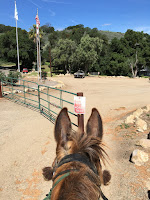 It is the nexus of a large number of horse trails, my idea was to head for the river and then on upwards.
Of course when we got to the river it looked pretty darn deep. 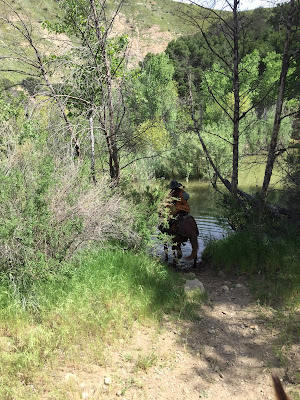 I told Tobe to cross, and he looked skeptical, and then Cowboy Bob wanted to know how deep it was before he'd take his precious girl across.
I fibbed, said it wasn't too deep..... then Tobe did a balk and said he knew better and didn't want to do it.
So Molly who is by far the most competent rider in the group told her gelding to get his butt on over there, and Tobe had to sheepishly follow, since after all anything a horse can do he certainly can. 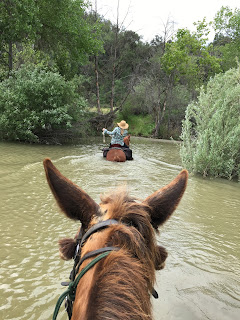 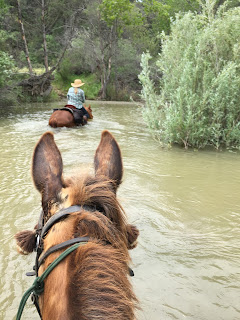 These photos are actually of the trip BACK across later, since on the way OUT I was holding on and doing my best not to get my boots filled with water and not fall off as Tobe waded through .... if he wasn't 16hh he might have swum! You can see the water is fully up to the base of Penny's tail ahead of us, and Tobe's ears tell exactly what he thinks of THAT !

Good thing about equines, no matter how worried they are about some silly thing their human is asking them to do, they are more concerned about being left behind by their herd.

Makes it easier to get them all across an obstacle like this. 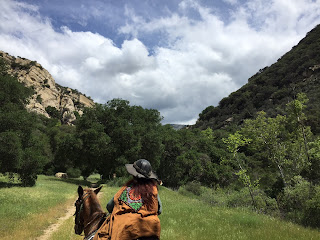 And the reward is the wildness...... on the other side of the river, where indeed the grass was greener. 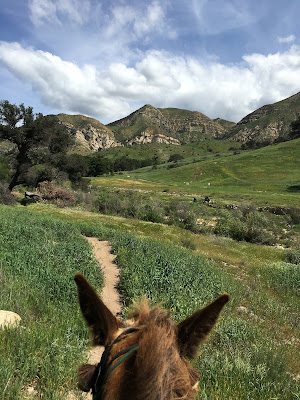 Even as we are still in the midst of drought, the winter rains have called forth the grasses and wild flowers. There could not be a nicer time of year to encounter this canyon. 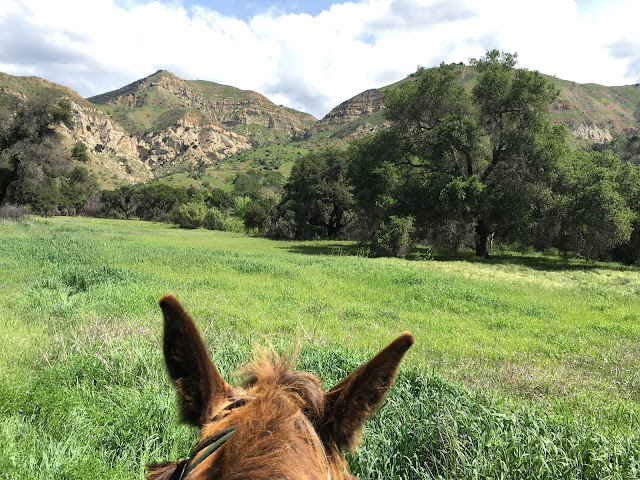 Above rise the beautiful mountains, with visible bones giving testimony to the volcanic shifts that have formed them. 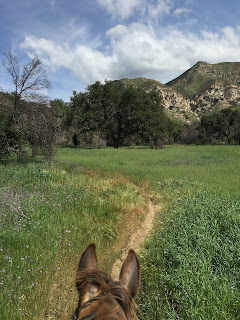 The clouds seemed far too fluffy to portend the rain that was predicted, and Nature cooperated with our plan to ride and waited until late afternoon to let loose with the desperately needed rain. 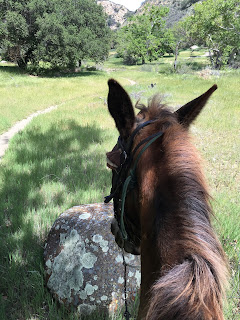 I always like passing by this lichen encrusted rock, it reminds me of the high cross gravestones in Irish graveyards. 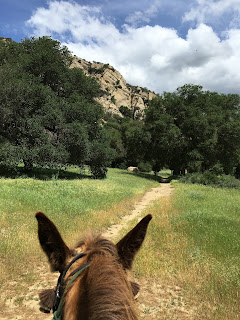 Onward and upward we climbed. There is an access road for vehicles to get to the campground, but we got the prettier route by far.
Eventually we got all the way to the place where the Upper Oso Campground trail splits, into the part that goes up to 19 Oaks and the one that goes over the Alisal Loop.
I once saw a dramatic wreck on the 19 Oaks Trail, and there were signs posted warning that there were 2 ground wasp hives on the Alisal, so neither of them were appropriate for today's maiden adventure with this group. 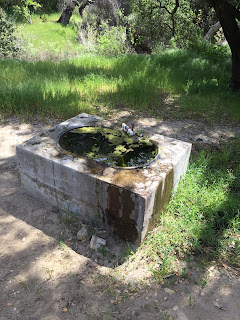 Instead the equines availed themselves of this convenient cement watering trough, and then we headed back down the way we had come, with a slight loop through the campsites to wave at people having a relaxing afternoon under the oaks.

These oaks show a lot of distress, but they are probably hundreds of years old and have seen worse. 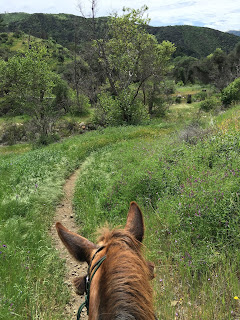 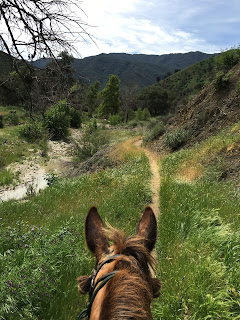 We followed the creek, back down to the river, and once again did the brave and deep crossing. A fine time was had by all. 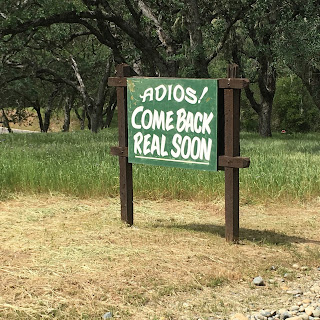 I think all of us agreed that is a very good plan!