It was a hazy humid day with a breath of wind, and that sounded like a Good Day to see where a new trail into the mountains above Ojai would take us.
We started at the Oso Trailhead in the Ventura River Preserve, walked down the river (rocks and warnings of rattlesnakes, no water) and then headed straight West, up Copper Canyon, for what turned out to be an hour of straight up up up. Then we turned, and returned on Willis Canyon.
6.36 miles in 2:46, ascending from 580' to 1,272' and then back again. 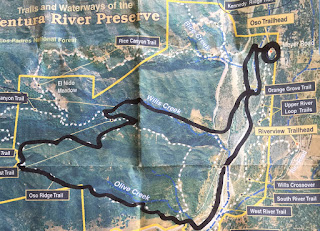 This is the wrinkled up paper map we navigated by, helpfully provided online by the Ventura River Preserve. They also offer a TrailFinder App that shows you where you are on the trails, but I use GaiaGPS and am very happy with the maps it makes for me with my iPhone. 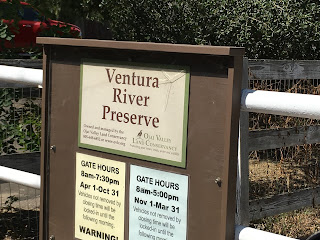 Access to the Preserve is free, and is a very popular asset to the Ojai and Meiners Oaks communities. We saw quite a few other equestrians out on the trails,  in the river bottom, but once we headed up to conquer the mountain we were on our own. 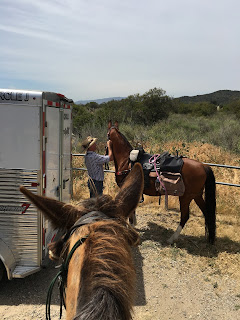 Following the sensible advice to not swim alone, today Tobe Mule and I were joined by the dancing duo, Cowboy Bob and Ananda Arabian. 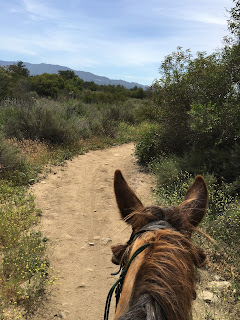 Nicely groomed soft trails let the animals get limbered up. We paralleled the river for a while, letting the day begin. 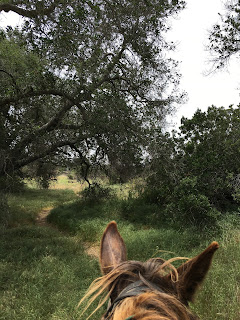 Considering how quickly Spring is giving way to Summer, there were surprising pockets of shade and green grass under the eternal oaks, the most significant plant in this beautiful valley. 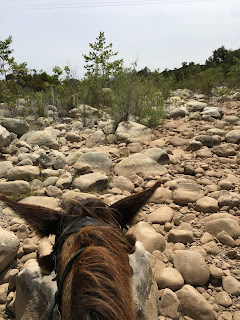 Once we started to cross the river, everything changed. In the current drought there is not a drop of water anywhere, but the rounded rocks bear testimony to what a roaring torrent this must sometimes be when all the adjacent mountains drain down into it. 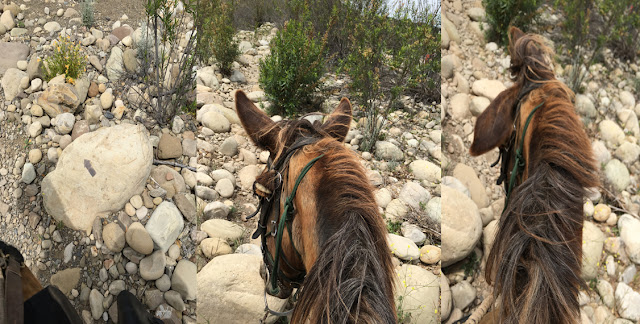 The path is so obscure there are arrows stenciled onto boulders to help you pick your way through.
Tobe did his best to follow them, but sometimes he shook his head in confusion. Good thing he has those sturdy mule hooves. 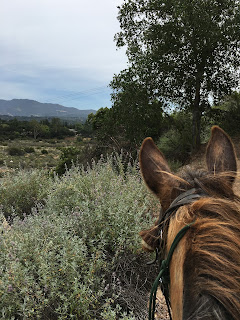 Once we left the river the chaparral sagebrush scents began, and we started climbing through intricate switchbacks, each revealing new vistas of the valley below. 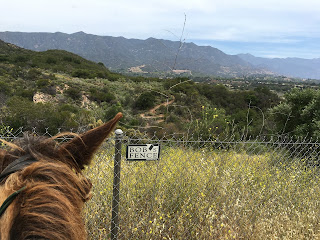 To keep us from slipping over the edge we were sensibly contained by Bob's Fence. 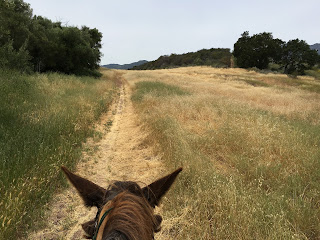 Then, quite surprisingly, the trail leveled out to a steady slope in a grassland. Let it here be admitted that neither of the humans had any idea where this trail went, but we were not letting on to the animals. They need authority figures, calm assertive leaders. So their riders made sure to have plenty of drinking water, first aid equipment, maps, and the attitude to get up and say "Here I come, and I have what it takes!" 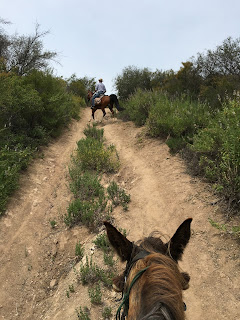 And this steep climb took the best the animals had to offer. Impossible to give an accurate impression of how steep it was, with ruts running down the middle, and the animals tracked and zig-zagged back and forth as they worked their way upward. 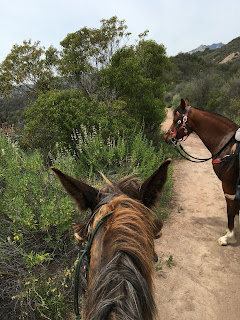 Taking a breather. I do not believe it is appropriate to let the equines nosh on the trail, Tobe gets plenty of treats and water when he gets back to the rig. So here we are just letting the sturdy steeds let their heart rates level off and then back to the climb. Which is not to say they are not staring longingly at the bush buffet. 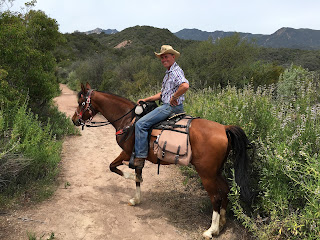 Ananda was born to run, all Arabians are, so here she is practicing her Time Warp moves while Cowboy Bob poses for a photo. 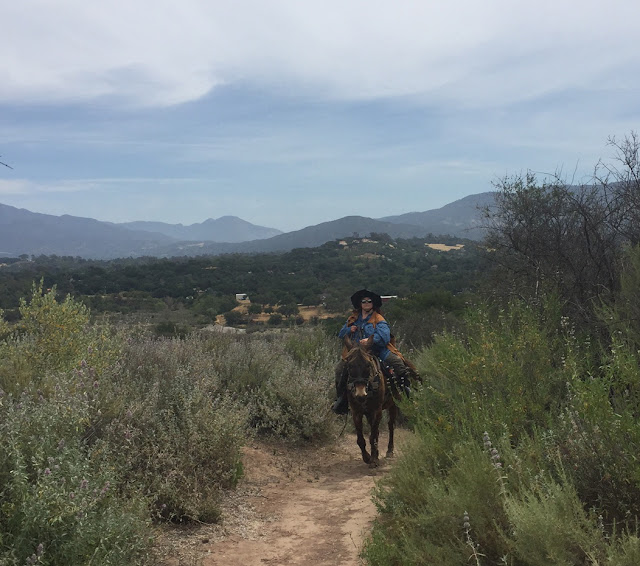 And here Tobe and I are, steadily ascending, taking in the smells and sights and the adventure of being in a new place. 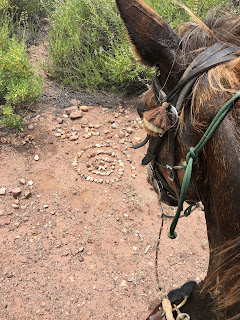 Almost at the top of the ridge we saw this mysterious spiral pattern laid on the side of the trail in small stones. Mysterious sight...... no telling how long it has been here. The climb is pretty extreme, it was a strong hiker who made it all the way up here and then left this mark. 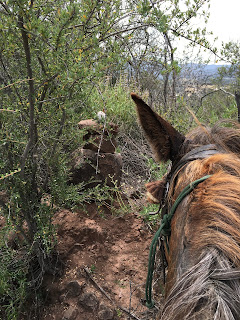 And not far along this rock cairn was tucked into the trees ....... Nature spirits worshiped here !

The  valley below is gridded up into pastures and agriculture, none of which are visible from the roads running through it. Rising up above it all shows how very productive and organized the landscape is. I especially like the curving way the trees at the left center are planted, so graceful. 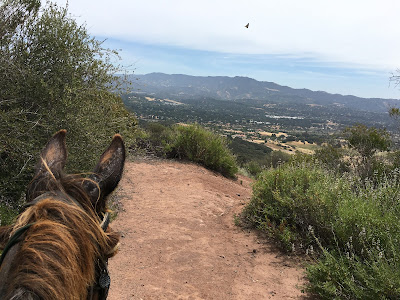 I turned Tobe to take this shot of the valley below us and when I looked back at the photos I was so excited to see the speck in the sky. Could it be a condor, coming down from the Sespe Condor Sanctuary? Might it be a red tailed hawk, or even an eagle?
Nope.
Blowing up the photo I discovered it is a butterfly, just as amazing. 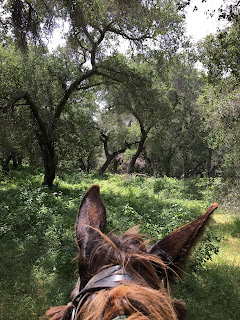 Finally, after a bit of map consultation, we found the Willis Canyon trail turn and began a descent through cool shade and trees. 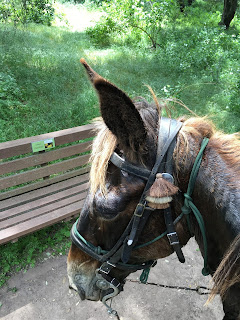 Along the trail convenient memorial benches have been placed, very inviting and well deserved by anyone who could climb this trail. Poor Tobe, at this point he was pretty darn sweaty and looked longingly as the bench, no doubt thinking if I got off for a rest he could have a snack on that luscious grass next to it.
But no. 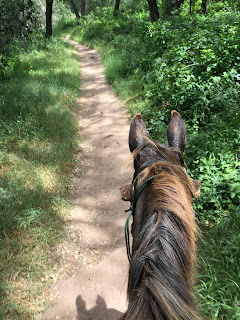 Now the gentle downslope and solid footing called us to speed, and I asked Tobe to kick up his heels and get some lope on. Ananda, who was born to drink the wind, was ready for action as we moved at a faster pace. 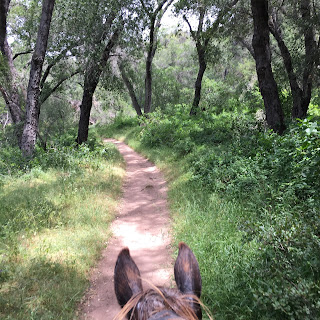 As lovely as a trip into magical woods anywhere in the world, as restorative and nourishing for the soul. 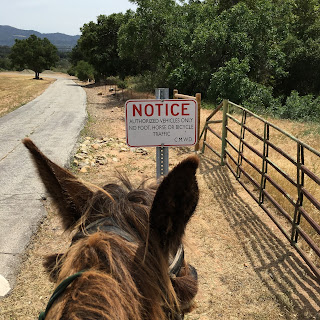 But soon enough, the idyll is over, and we find ourselves back down on the civilized level where do this don't do that signs start telling us we must behave. 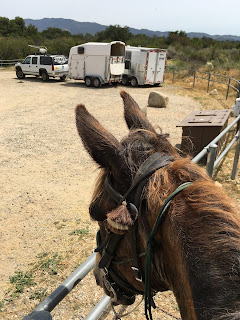 And there are the rigs, and Tobe can be sure that there will be water, carrots, apples, and his human and saddle will come off and he can have a good roll in the dirt. That, to a mule, is compensation enough for having done all this hard work and taking me to the summit.

Then a ride back to his home on the coast, where it is a foggy hazy cool day and he can relax.


Until the next adventure! 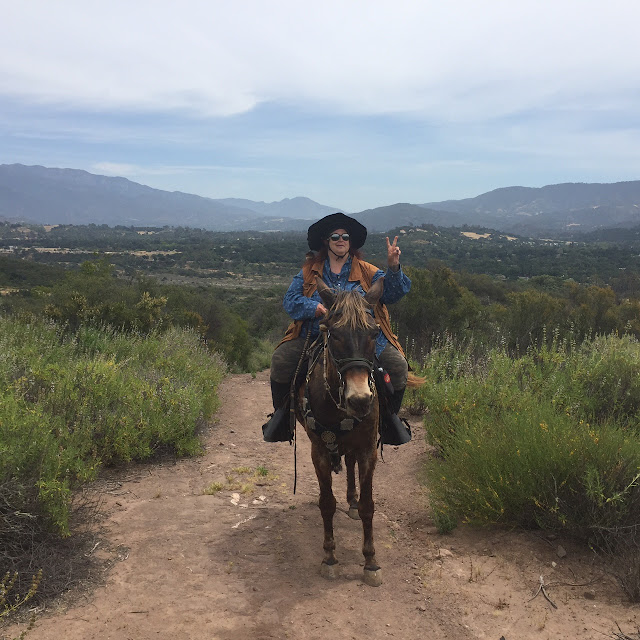