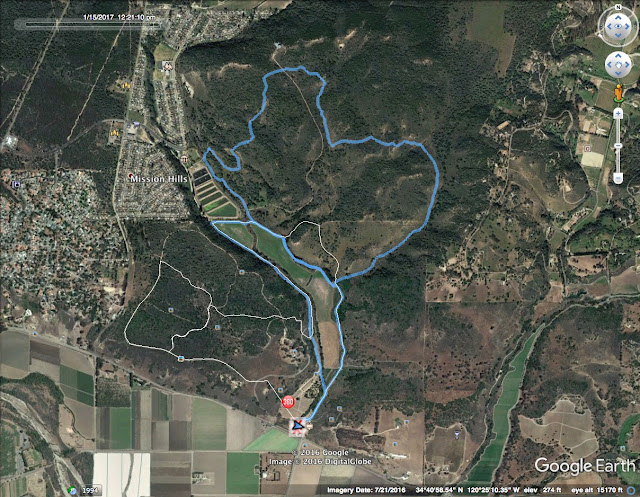 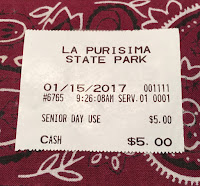 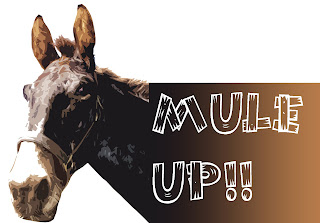 The first trail ride of the new year, a quite thorough exploration of the La Purisma Mission property with the Santa Ynez Valley Riders.
Thirteen riders, covering seven miles in a two hour ride, with an ascent of 545 feet from the Mission at the low spot where we began to the heights in the barren above.
This also marks the very first time I have gotten a SENIOR DISCOUNT.
Now I am officially an OMG : Old Mule Girl!!! 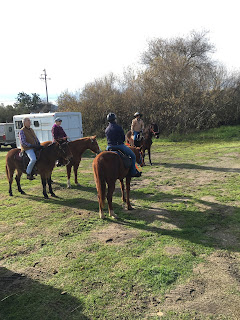 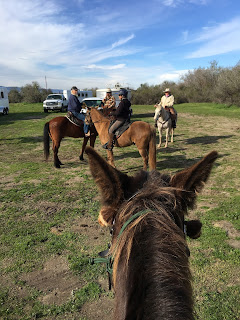 We met up at the parking area at the Mission, and everyone quite efficiently got ready. This organization has monthly trail rides, and no one in the group causes drama. Thank heavens for that. All sorts of different horses, 2 mules, and nice people. 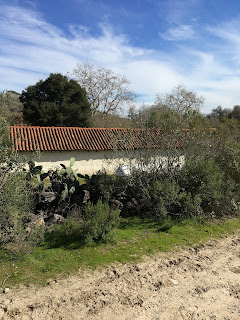 We headed out the trail road that winds behind the Mission, avoiding the courtyard and buildings where crowds of school kids and tourists have right of way and we on equines do not. 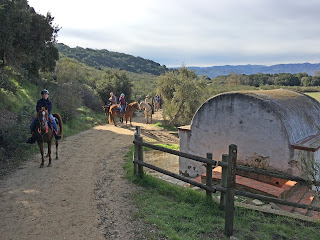 And I behaved badly. You are NEVER supposed to strike out ahead of the Trail Boss, BUT Tobe had been sitting in his paddock for a month, slogging around in the mud, and I just had to let him stretch out and rack up the road. I know it was naughty, and eventually I was told to hold up and obey the rules, and from then on I did. Here's the group catching up to us, and one of the old Mission outbuildings on the right, with a view across the Lompoc Valley to the coastal mountains. 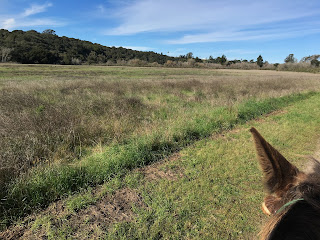 This is the big flat valley visible in the map, where the residents of the Mission grew their food in the olden days. The present State Historic Park covers 2,000 acres of what was once a 470 square mile land holding, established in 1787 as one of the string of Missions that thread their way up California. More information here. 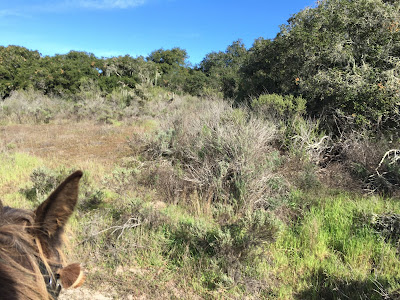 At the end of the valley we struck out across the Burton Mesa chaparral. The dominant tree here is the Coast Live Oak, Quercus agrifolia, and it was a great pleasure to see them making a strong come-back after so many years of drought. The scrubby bushes beneath the trees are Chamise, Adenostoma Fasciculatum, and they are scratchy and fragrant. Between the two in size are the Shagbark Manzanita, Arcostaphylos rudis, which was pretty much the only plant I saw heavily in bloom. But after the recent heavy rains I predict this place will be filled with spring bloom this year. 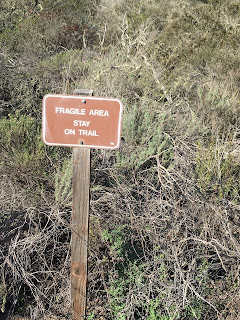 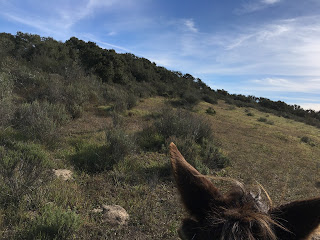 Up and across the Mesa we went, enjoying the scents of the Chamise and Black Sage, Salvia mellifera, as the animals pushed through them. In some areas the skeletons of oak and manzanita are stark against the skyline, and testify to burns, but underneath the land is making a comeback. 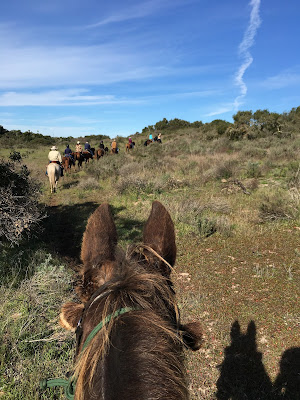 And the little band of riders threads their way up the Mesa. Quite appropriately the sky was filled with Mare's Tail clouds, Cirrus Uncinus. And the contrails are a reminder that Vandenburg Air Force Base is only a few miles away. 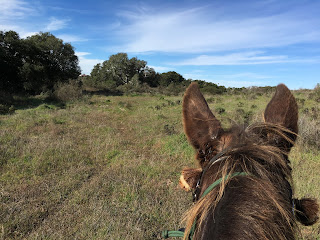 The open spaces are tempting, but we promise to stay on the trail. 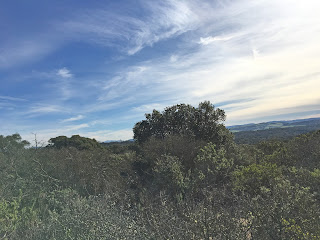 Because the chaparral can be very deceiving. You think you are going along just exploring and then all of a sudden it closes in on you and you are thrashing through thorn bushes and there's no place to turn around. A mule is an ATV, but there's always the chance that he might hunker down to get under a branch and whoops, I'd be scraped off his back. 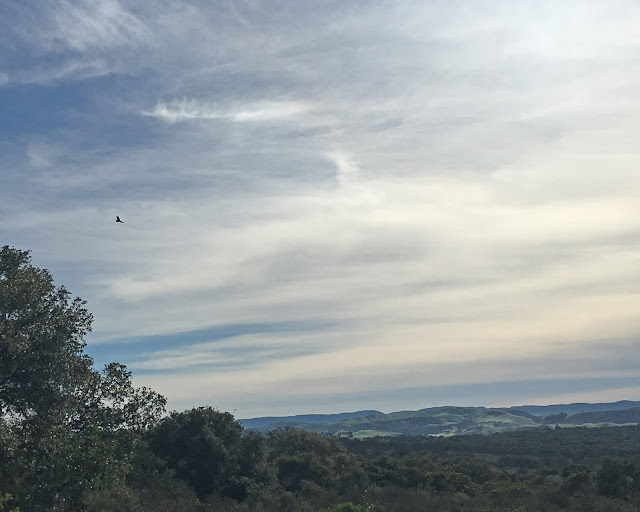 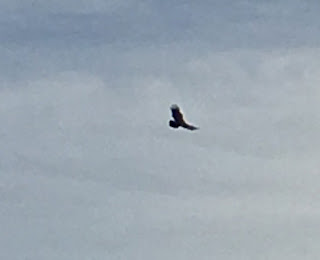 Looking out over the valley I watched the Red Tailed Hawks, Buteo jamaicensis, circling in their ever vigilant search for prey. Here's the fellow just barely visible above the tree on the left in the bigger photo. 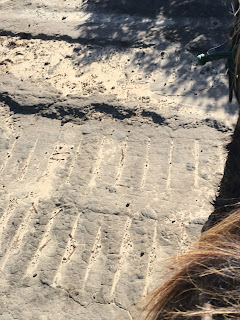 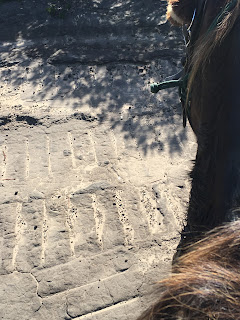 In the middle of nowhere we came across this pattern in the ground. It seems to be adobe bricks laid hundreds of years ago as the foundation of a building, but I am not sure about that. 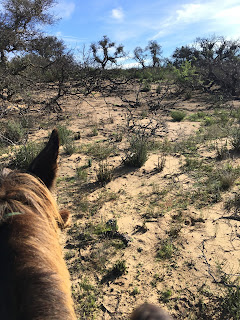 The reason the club chose to ride this place now is because of the sandy soil. Where other forest trails are still muddy and the clay sticks to the hooves, this place is largely sand, and makes for a perfect rainy season excursion. 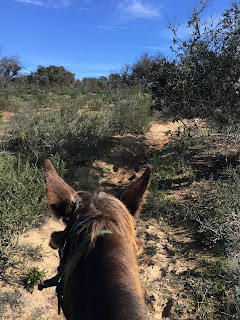 Right about here Tobe Mule alerted to something, and we had our one argument of the day. I don't disagree with his senses, I know he can smell far better than I, but even IF he smelled a puma or other predator he was NOT allowed to hasten away at high speed. we argued about it a bit, but then stayed in our place in line with him locking his ears in the reverse position, listening for the approach of danger. 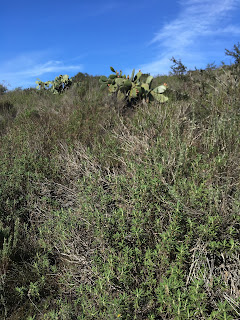 Then the group started back, and passed this hillside with clumps of Prickly Pear Cactus, Opuntia focus-indica, that is sold in local Mexican markets as nopal, and the tasty red fruit are called tuna. 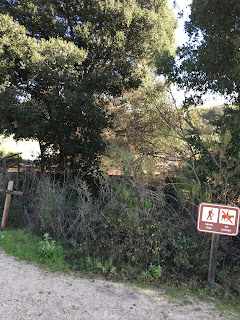 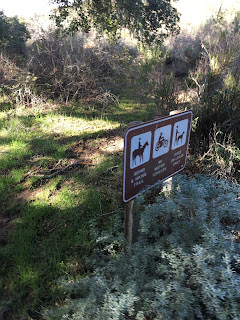 And you know you are getting back to civilization when the signs start telling you where you may and may not go. 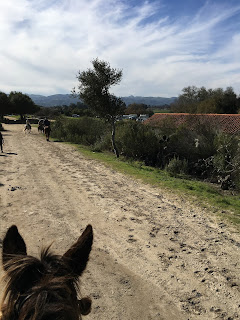 For today, where we went was a fine two hour stroll through the past, through the chaparral that essentially looks like it always has. A trip back in time, good exercise for mule and human, and a fine start to a year of rides and equine adventures. 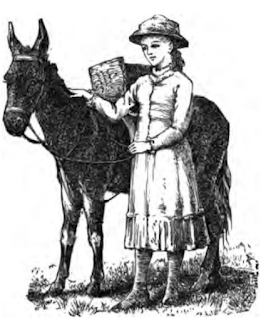 “I think people who don't know the woods very well sometimes imagine it as a kind of undifferentiated mass of greenery, an endless continuation of the wall of trees they see lining the road. And I think they wonder how it could hold anyone's interest for very long, being all so much the same."        ----- Bill McKibben, Wandering Home