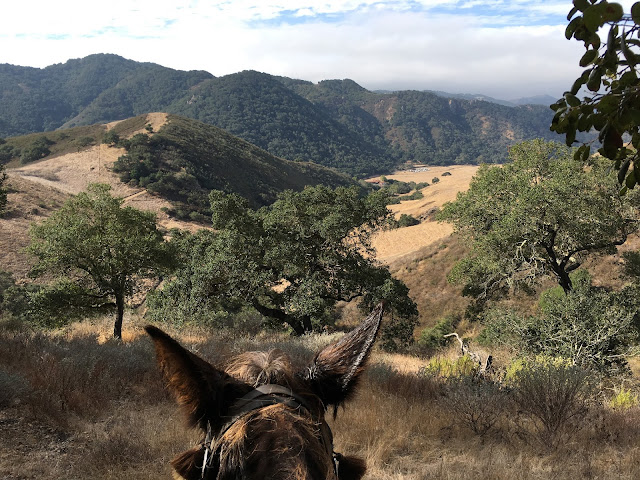 Two days before Hallowe'en the Equestrian Trails Alliance organization Ride Nipomo offered members the opportunity to ride on the YellowJacket Ranch in the Huasna Valley, East of Arroyo Grande, California. I joined the club just to take advantage of this rare opportunity. 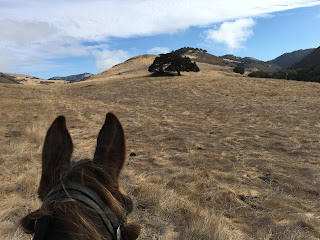 It required loading up Tobe Mule in the pre-dawn dark to get there on time, but we knew it would be worth it. After following winding country roads, glimpsing cows and wild turkeys and various crops filling lush bottom land surrounded by heavily wooded mountains..... at last we arrived.

I had been invited to come by Stormy and her Awesome Arab Pico, and she promised to lead us across the landscape safely.


Also my pal Ben from Boston was in town for a photo shoot and I thought he might enjoy a hike in "the Other California," the one hidden away on private ranches, unseen from the highways, inhabited by cows and country folk.
He was ready ! 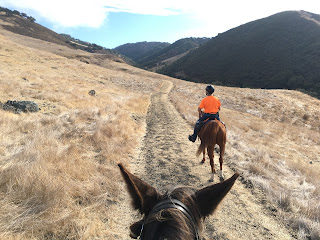 And off we go, with our leader in blaze orange confidently setting the pace.

Pico is an endurance Arab, and I know he could fly these trails, but he and his mistress kindly adapt to Mule Pace when we are with them.

We went a distance of 4 miles in 2 hours, which may not seem like far but it was often very very steep !!! 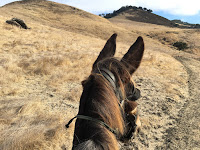 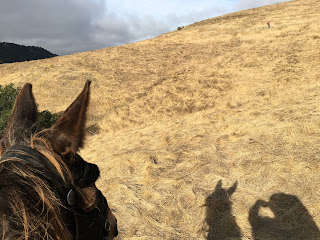 It is certainly not a civilized place. Rolling hills that give cows a home, and humans a chance to roam and explore. In the second photo above, Ben is a tiny blip traversing a hillside at 1 o'clock..... quite a change from an urban life in Boston, where exercise is done in a gym. 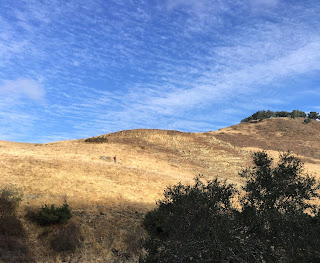 Gullies with dense undergrowth and stands of old oaks alternated with wide open hillsides covered in dried grasses, testimony to how lush they must have been in last winter's rainy season. 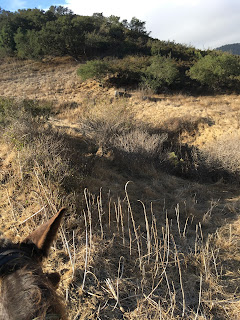 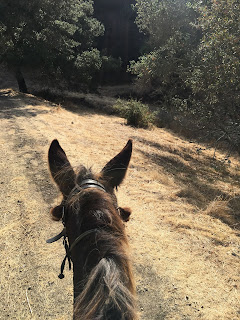 If you refer back to the map you'll see a place where the trail dead-ended, and these photos show the teaser trail we followed up to that peak. 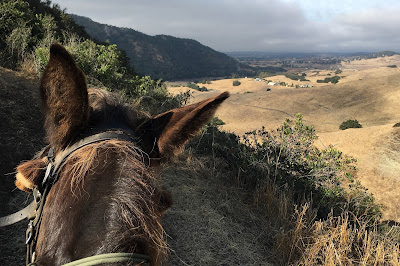 Climbing higher and higher and seeing the valley stretching out towards the sea. The ranch owner told us later that if there had been no maritime fog we would have been able to see Morro Rock in Morro Bay to the North. 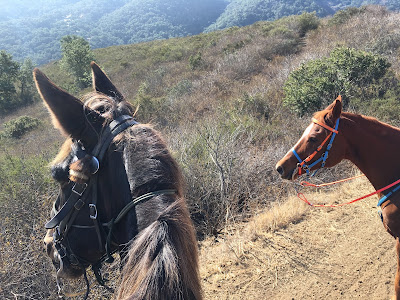 Tobe and Pico stop for a breather and to admire the landscape. 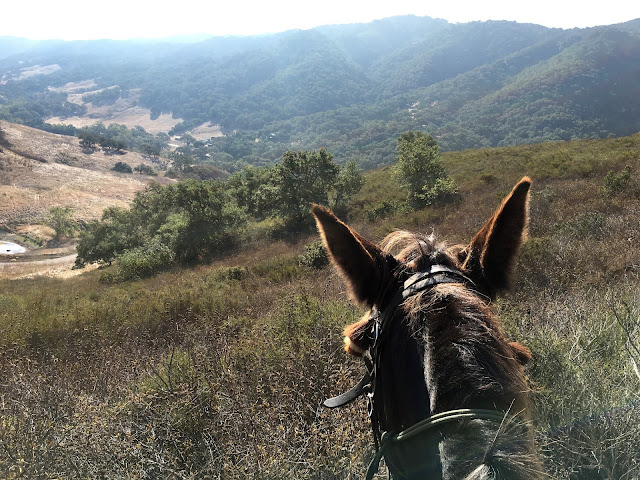 Looking back inland there are ponds and more hills and valleys stretching out to the horizon. 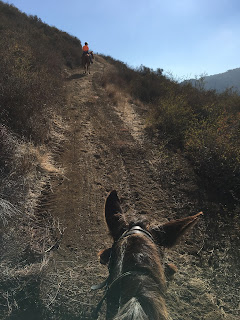 But no resting on our half-way accomplishment, there was one more push to attain the top.

Pico, being an Arabian, practically dances up hills.

Tobe, being a mule, puts his shoulder to the wheel and conquers the task with slow and steady power. 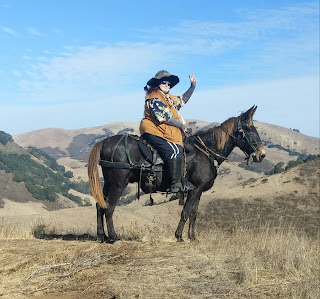 And here we are, the IncrediMule and the Queen of Knots attain the heights. 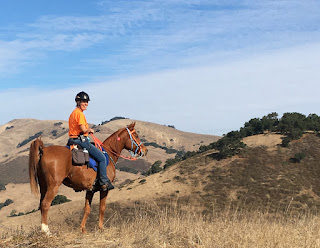 And the stalwart Stormy and Perky Pico got us here! 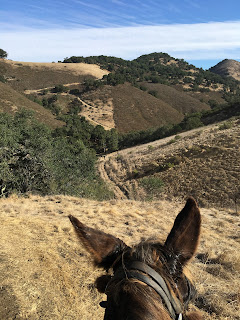 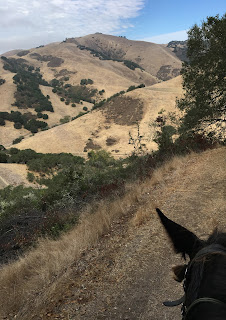 What is utterly unfair is that there is no way to convey in photographs how nearly vertical some of these trails are.
I've been battling a bit of PTSD after a mule wreck a few years back that injured me, and steep drop-offs and vertiginous trails have been a challenge. But today I really felt like any consciousness of fear is my friend, making me aware of living in the moment, and I was utterly calm. I knew if I kept myself centered my mule would get me through, and he was seeing Pico up ahead of us conquering the trail, so no doubt he could too. 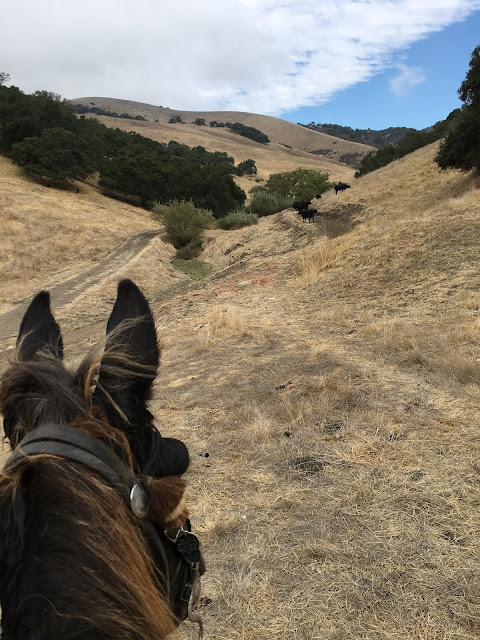 Once back off the hill we were in cow land. There were cow-calf pairs making their ambling way across the slopes, and it was a good reminder of where the beef comes from. The little calves were often gamboling about, making the best of the one frivolous part of their brief lives. 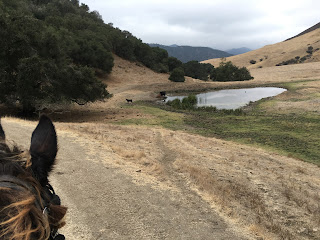 We came up to one of the little lakes and saw that there was a cow there with twins, but the calves were two different colors! 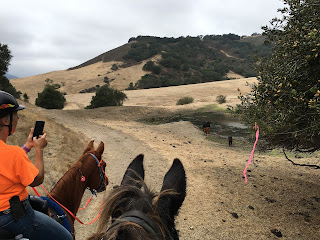 We stopped at a respectful distance, watching them watch us.

The pink ribbon on the bush was put there as a marker for the riders, letting them know this is a main trail throughout the ranch that will loop them back to the starting point. 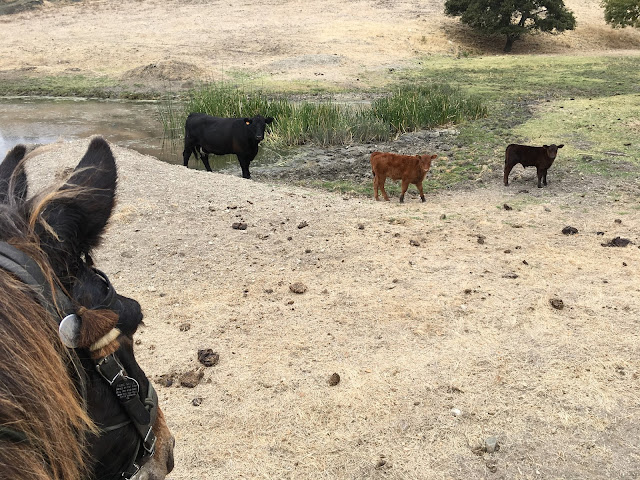 Talking to the ranch owner later he said that all the cattle are Black Angus, but since they did have another other breed of cows previously on the ranch some of the mother cows have a bit of mixed blood and sometimes an oddly colored set of twins like this will appear. 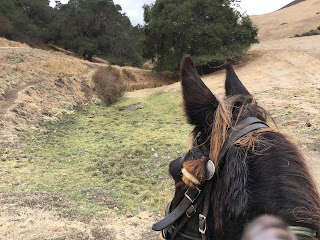 This must have been a pond until just recently, it was still filled with a lush growth and looked like it might have been boggy. 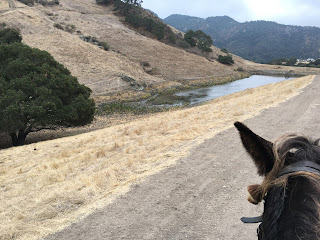 And coming down the main jeep track we saw this water feature, with picturesque ducks. 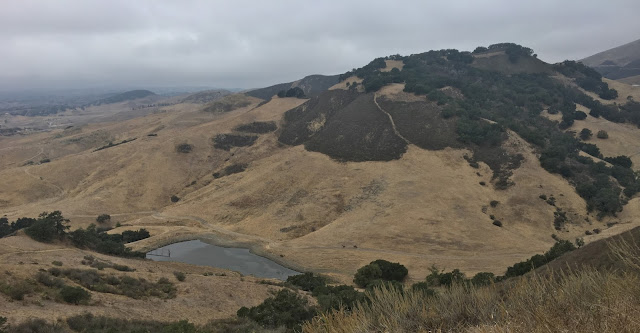 In this shot taken from above, we are the two tiny specks dead center walking along the water. 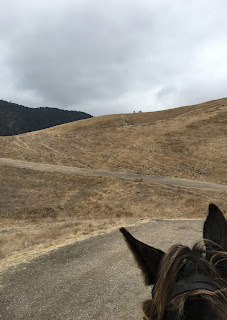 Up on the crest of a hill appear some riders.

The ride was more of an opportunity than an organized event. Three dozen Ride Nipomo members RSVP'd, and then took off in small groups to explore, with a  promise to rendezvous in 3 hours for lunch.


We had one final hurdle to cross. We came to a stream with mud  that looked very boggy.  Pico was not sure it was safe, but Tobe and I determined that the area to the far right looked safe to us and Tobe strolled across it carefully, placing each foot with great deliberation. 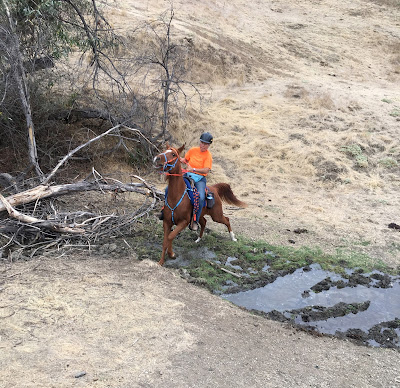 Then Pico, being a horse,  decided that getting this over with as quickly as possible was the best approach to danger and ran through it.

And then the ride came to a close
And we tracked back to where the trailers were parked. 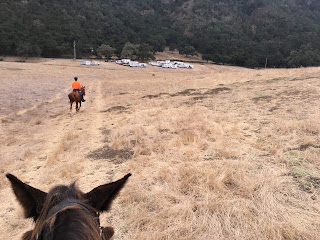 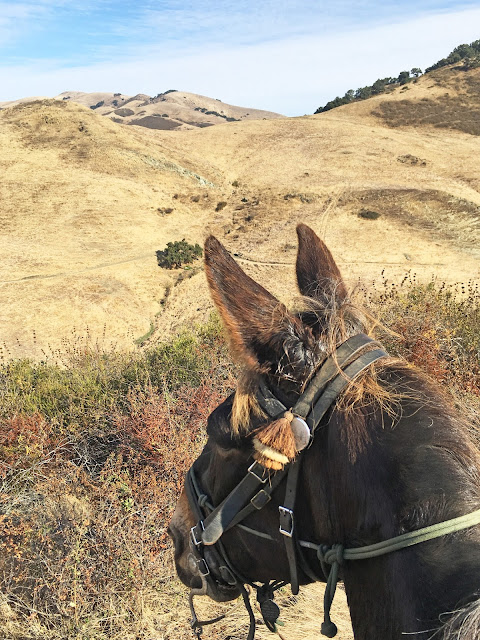 I end the day with thanks to the ranch land owners for their generosity for allowing us to visit their property, to Ride Nipomo for the opportunity, to Stormy for alerting me to the event and being our guide, to Ben for being a good right hand and able conversationalist and traveling companion, and to the mighty Tobe the IncrediMule, for being my legs.

Here is a nice movie that Ride Nipomo made about this event, featuring many of the photos from this blog: 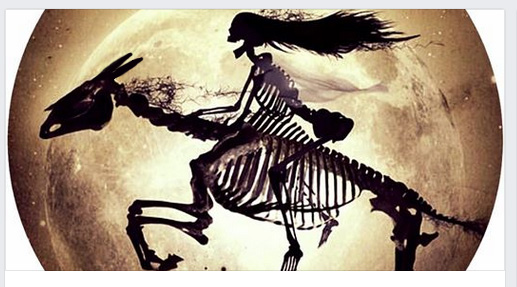