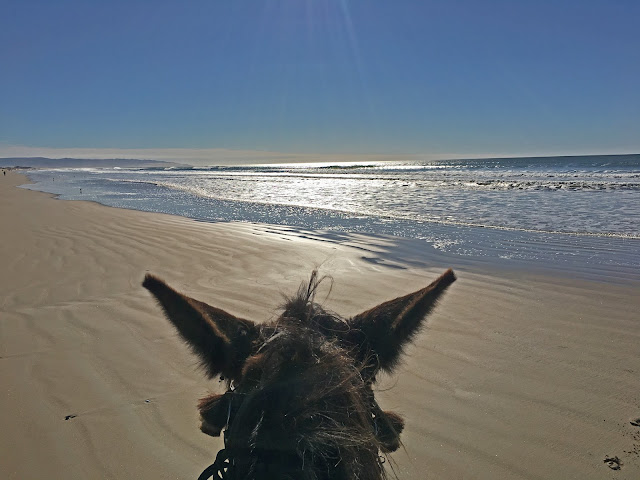 The edge of the continent, with the best view of all, thru a mule's ears.

A bright and breezy day for a ride through the Oceano Dunes and on Pismo Beach.

We went a total of 4.5 miles in 2 hours, an average speed of 2.3 mph except when we loped on the beach when we got up to 12.3 mph.
A maximum altitude of 79 feet climbing thru the dunes, and a long stroll on the sand at zero. 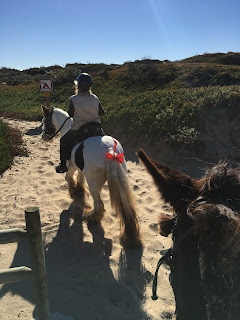 To begin we line up behind the Gypsy Vanner Oberon, with his festive red tail ribbon.
Time for him to step up and perform his weekly civic duty, be a patrol horse, looking for miscreants and vagrants in the sacred dunes. 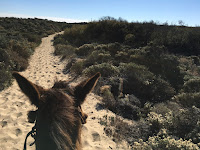 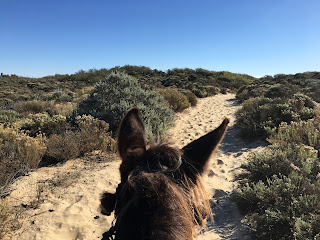 Into the dunes, following the sand and the hoofprints of other equine adventurers. 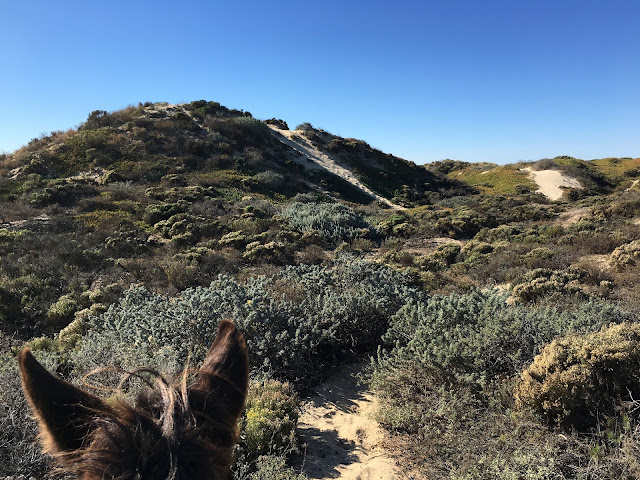 The plant life of the dunes is varied and beautiful, and trails cross-cross through them. Plants native to the area include the arroyo willow, sand verbena, and bush lupine. 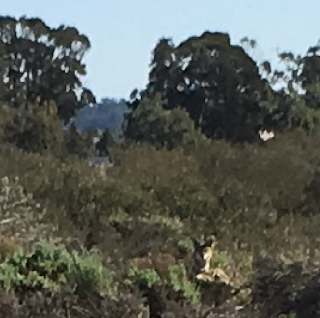 And carefully camouflaged up in the bushes was a young coyote, observing us calmly. 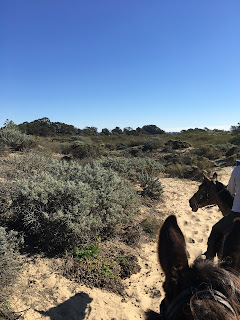 Karma the Arabian was the first to alert to the coyote, and she riveted on him, not quite sure what to do.

Tobe was not concerned.

Oberon was patient, he's seen it all before. 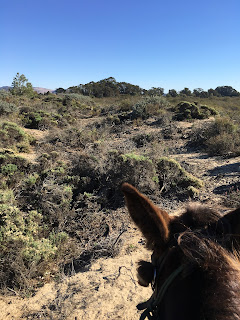 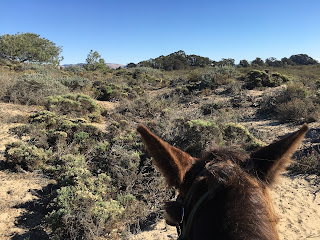 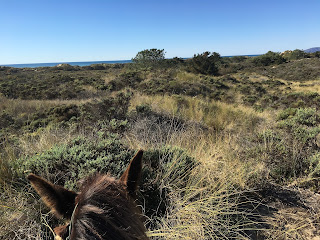 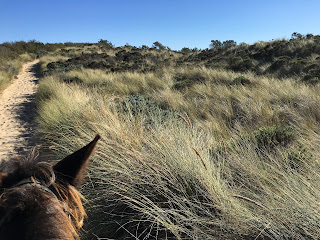 A wind made the dunes come alive, with grasses blowing and bushes swaying.

A strong Santa Ana wind was whipping fires in the counties to the south, but here the air was clear and fresh. 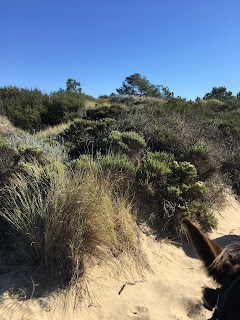 The Oceano sand dune area is recognized by scientists, conservationists, government agencies, and the public as the finest, most extensive coastal dunes remaining in California.

Most of the material that forms these dunes has been carried down to the ocean by various rivers and creeks, deposited here by ocean currents, and then shaped by the wind into the dunes that we see today. 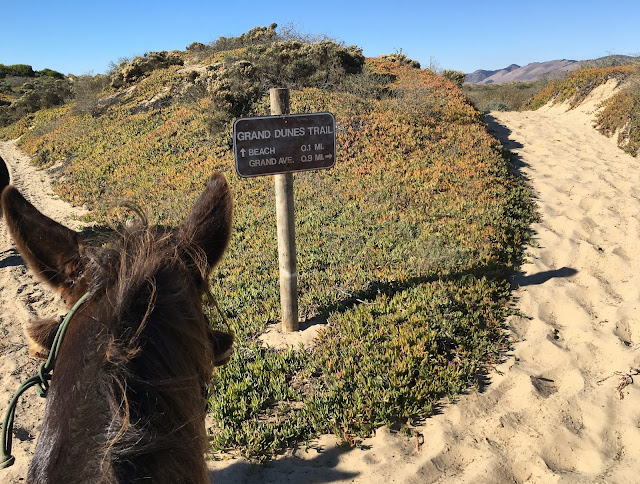 We had done the Grand Dunes Trail, and now it was time for our trail boss to place her time sheet in the mailbox, registering her volunteer hours. 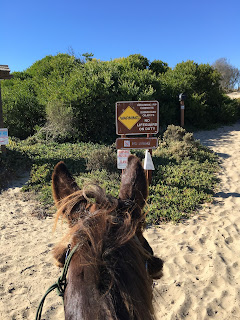 Then it was time for the beach.


what IS that animal slinking along at the end of the access road? 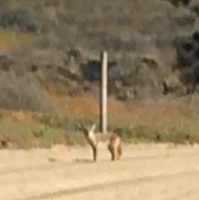 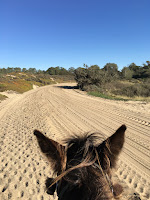 Just barely visible, way down the road towards the campground.........


another coyote
bold as brass
walking calmly towards us.

This IS his territory, and we are mere visitors. We acknowledged him and moved on. 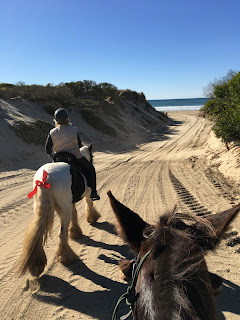 Because it was time for the beach.

Tobe, being a Kentucky Mule, is suspicious of the waves in the gigantic lake that is the Pacific Ocean.
He is growing to enjoy it, but is not yet at ease.

Karma Arab had never seen the ocean, and we had no idea what she would think. 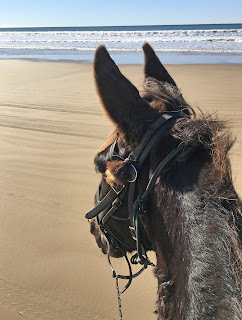 He's been here before, time to consult that memory. 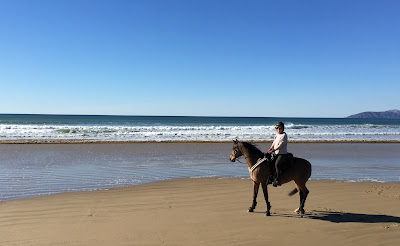 Miss Karma Arab, being a horse, simply enjoyed herself.  She trusts her owner Kerri, so she obediently slipped into this new experience. 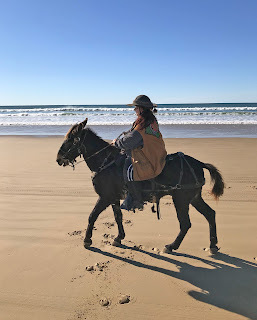 Tobe took the opportunity to show off that he is,
in fact,
a gaited mule,
with the special smooth movement that is his birthright.

So we sped off down the beach and enjoyed moving very fast indeed,
no rocks, no squirrel holes, no obstacles to untrammeled speed. 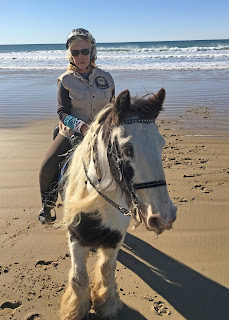 Oberon Vanner, on the other hand, comes here every week with his Mistress Barbara, and has a very been there done that attitude about it all.

He knows that a big part of his job is posing for the tourists, looking mythic on the beach, a vision of a medieval spirit now patrolling the dunes. 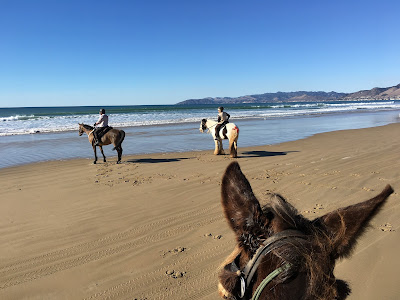 Kerri and Barbara were convinced that the whirling birds far out to sea on the horizon indicated the presence of whales. Tobe and I were skeptical. We watched the waves and birds, and bathed in the negative ions, and the day was good.


Any vacation day on the back of a mule is a good day. 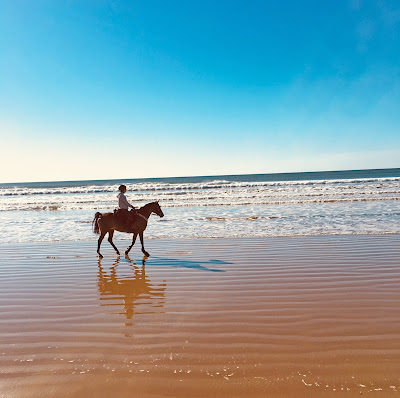 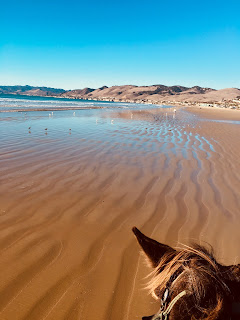 The closest Tobe wanted to get to the water was the wet shiny places, so, that was what we did.        We saw lots of birds, dog walkers and off-road dune buggie racers, and did a little loping to prove we could. 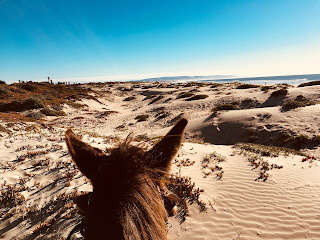 Then we started back inland, across the northern part of the dunes, back to the staging area where we began our journey.. 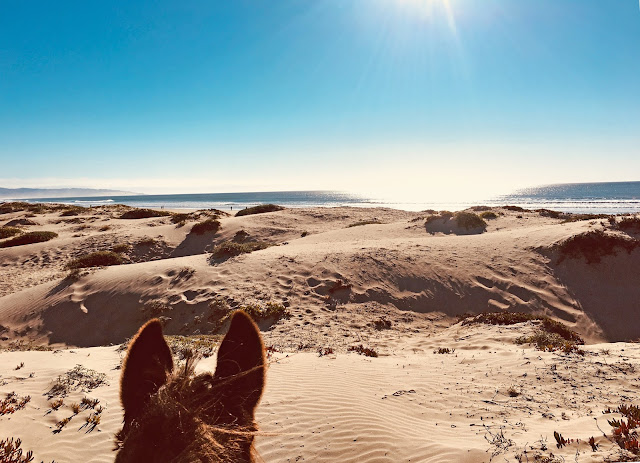 Postcard from another planet.
Proof that we transcended time and space and rode our steeds into dreams.


"A horse is the projection of peoples' dreams about themselves — strong, powerful, beautiful — and it has the capability of giving us escape from our mundane existence."
~ Pam Brown