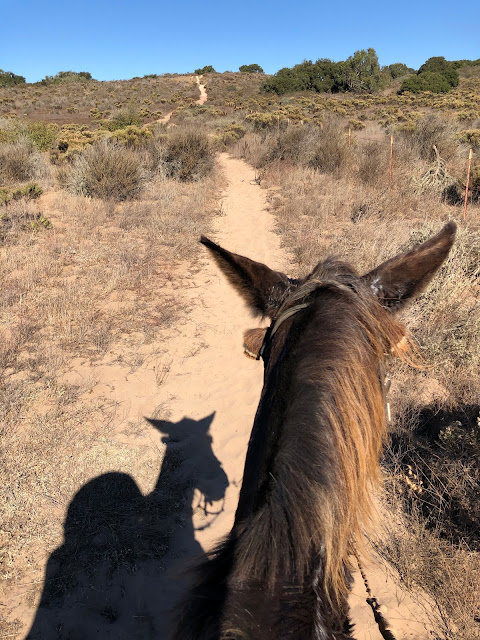 On a pleasant sunny Sunday three MeetUp gal riders met at La Purisima Mission just outside of Lompoc, CA, to go for a short ride.

All of us being mature ladies of a certain age we get the bargain price of $5 to park our rigs and ride whichever of the 25 miles of trails on the mission grounds we choose.

Today as you can see on the map we ambled off to the right of the mission buildings, then straight up the property boundary. Up as far as the base of the mesa, then down through a canyon and back along the central valley. 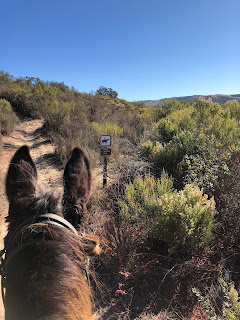 Tobe being a bit out of shape, having been off the trail for a year, complained a bit about setting off up a hill. But being a mighty mule, he conquered the test. 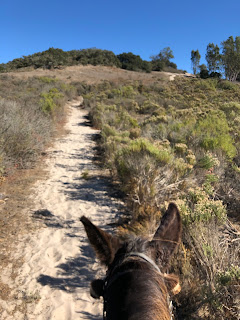 This place is known for being largely sand, which makes it a favorite for riding in wet weather.

It is also used by competitive endurance riders, as going through the sand builds up the muscles on their mounts. 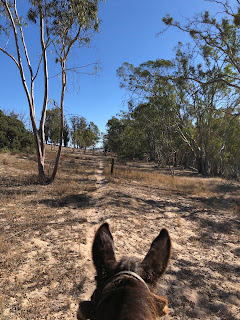 But at the top of the hill I chose to veer over to the slightly less traveled path, through eucalyptus trees and brush.
Easier for the animals, and shaded. 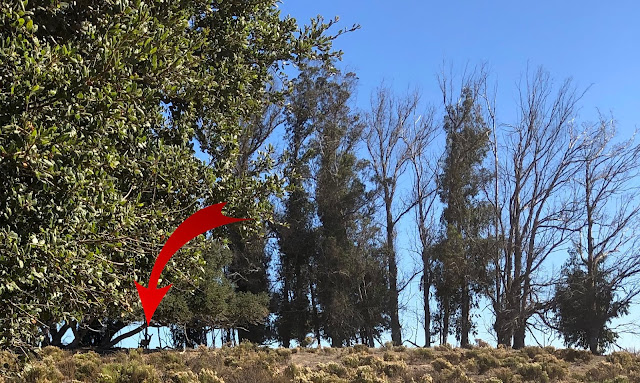 In every trail ride there are moments when the humans are humbled by how much more acute the senses of equines are. 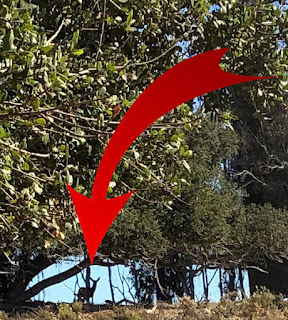 WAY up on the horizon several deer were grazing in the trees.

Tobe will stop and alert by leveling his ears forward with interest, and we mere humans had to squint and look and finally see the deer, who had frozen still as camouflage. 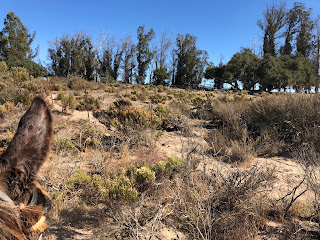 Can YOU see the deer in this view? Tobe certainly can. 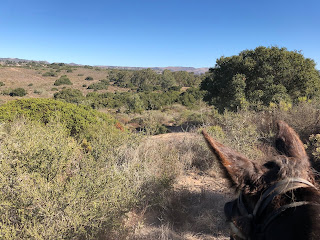 Tracking along the straight line of the fence, every so often the view opened up to the horizon and showed the valley below and the mesa above.
The chaparral was extremely dry, and the trail very poorly maintained. For long stretches we were bashing through overgrown manzanita, toyon and chamise. 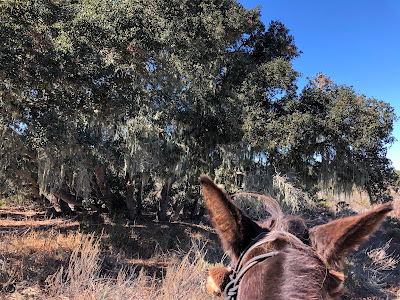 This beautiful old oak tree is hung with Spanish moss, as are many on this property. 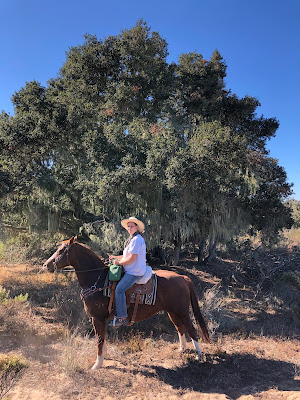 Jo asked if I would take a portrait of her on her mare Einstein in front of it. The horse came from Cal Poly and Jo wasn't quite sure how she'd do on the trail, having been bred (out of Highbrow Cat !) for barrel racing. But happily she was a well behaved trail citizen. 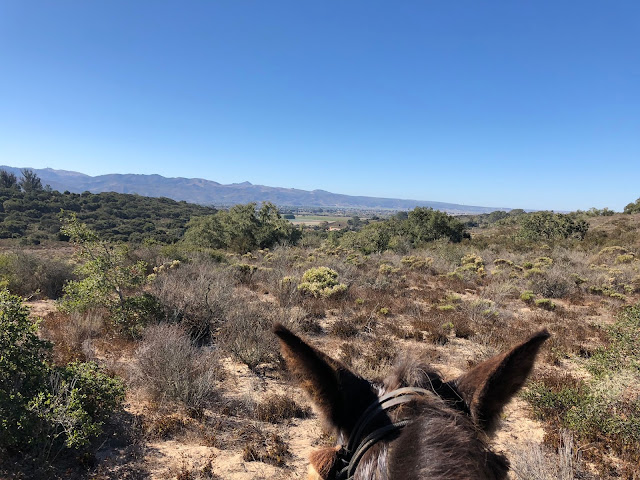 From this elevation we could turn and look out across the valley toward the town of Lompoc. The mountains on the horizon run down to the ocean. 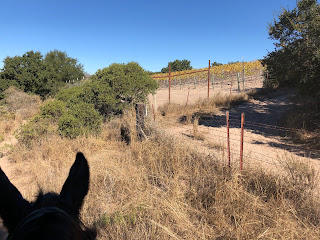 But up and up we went, following the sandy track up towards the mesa.

This vineyard has been planted since the last time I rode this trail. 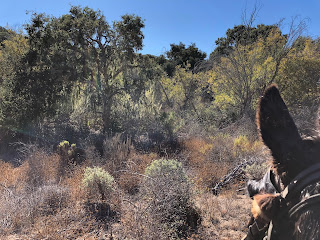 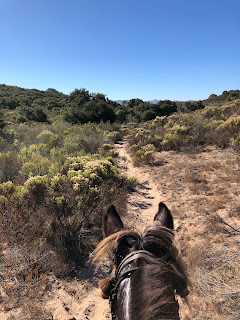 This is where the chemise seemed to be exploding. The white tufts of flowers would fly up into the air as we brushed our way through down the trail. Happily Tobe & I were in front. 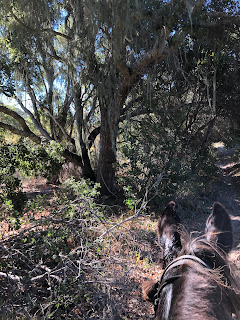 But enough was enough of that hot sun. We stopped for a rest under some trees and I suggested we make a turn to go back toward the starting point.

All the animals, who were doing all the work, were happy to go down a shady canyon. 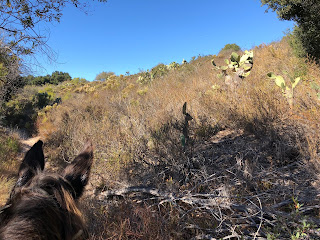 On some hillsides stands of opuntia cactus stood, filled with ripening fruits. 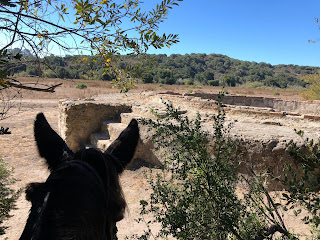 Then the canyon trail came out onto the central flat valley, where several ruins stand as testimony to the years when the padres enslaved the Chumash and "civilized" them. This was the water cistern that captured water from a spring, then channeled it down the valley to the main mission buildings. 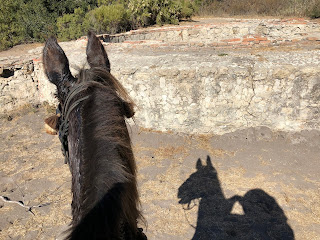 Good old Tobe, he waits patiently whenever I announce a "photo op" and try to capture his viewpoint. 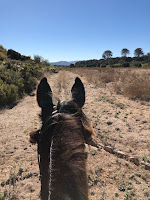 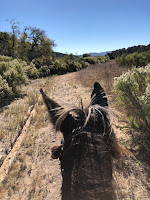 We followed the stone irrigation ditch down along the side of the valley, avoiding the main road which had many walkers. 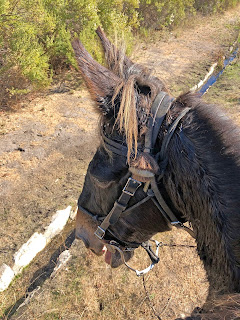 By this time Tobe was getting pretty thirsty, but what little water there was in the stone ditch was filled with larvae and tadpoles.


There is an eerie sense here on this property of all the lives lost and the culture destroyed. The land holdings once covered 470 square miles. 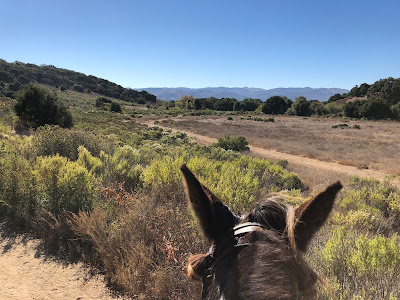 Originally it was named La Misión de La Purísima Concepción de la Santísima Virgen María, or The Mission of the Immaculate Conception of the Most Blessed Virgin Mary. This open valley would have been a massive organized grain and vegetable growing area. 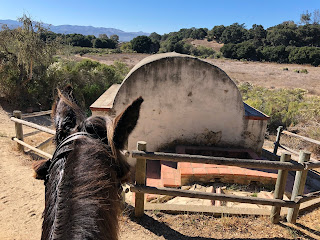 I think this is the ruin of a kiln. 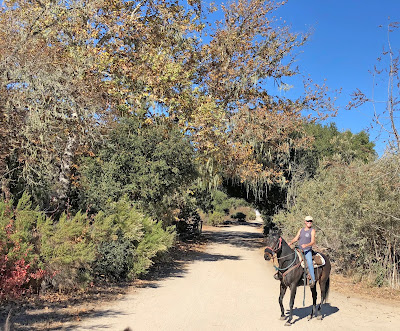 Jamie asked for this lovely display of fall foliage as the background of a portrait of her and her sassy ex-racetrack mare La Mosca, the Horse Fly. 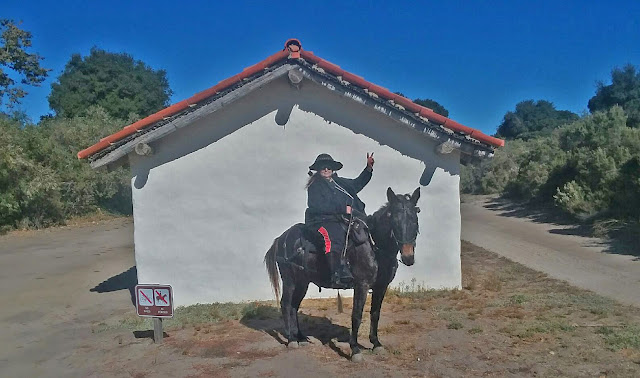 And I chose this old mission building as my backdrop.

Then it was time for a picnic lunch for the humans while the animals dried off and rested. 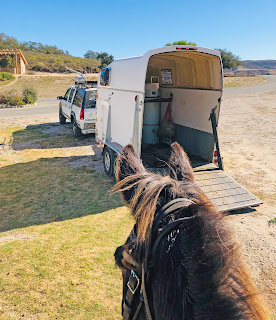 Then Tobe and I could load up in the Suburban and BrenderUp and head for home an hour south.

A successful ride in beautiful country, good companions, steady mounts, and just enough trail time to exercise the animals but not exhaust them. Tobe and I both are just happy to be out and about, and grateful for people and animals to share the experience with us.