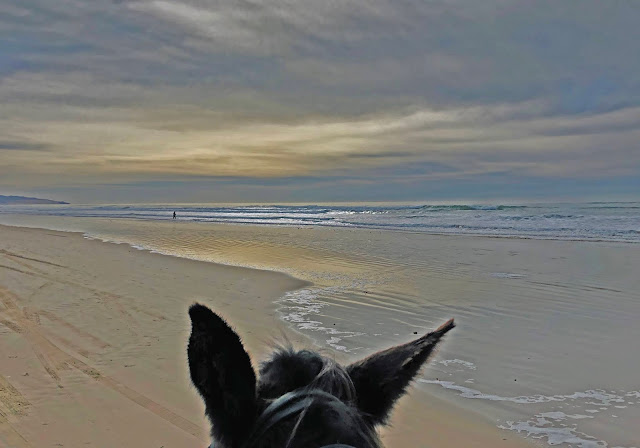 It is a special joy to be able to ride on the edge of the continent. The smells and sounds of the sea strand are unlike any other place, and the wave-swept air is refreshing and bracing. 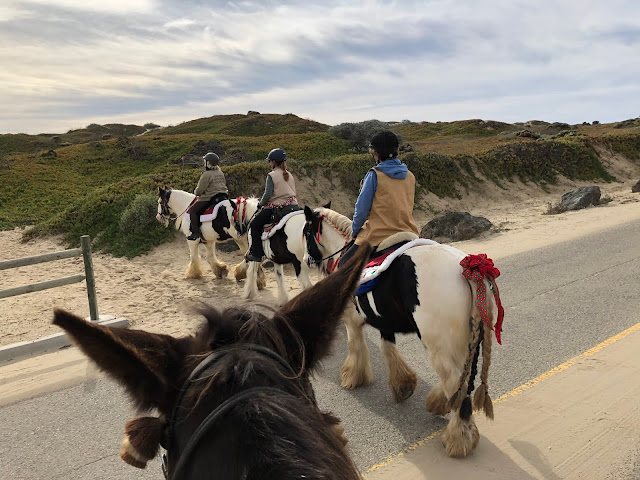 The MeetUp convened and was led by no less than THREE Gypsy Vanner horses. They are a rare breed famously treasured by the Romany of Europe and the Tinkers of Ireland, and just to see one of them is a magical moment. 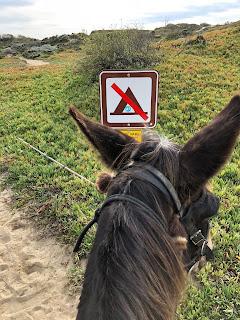 Every week the owner of one of the Vanners does this route as a California State Parks Volunteer.
Her job is to look for illegal campsites or piles of trash, and report them to the Rangers who will come out and roust the hobos and send them on their way. 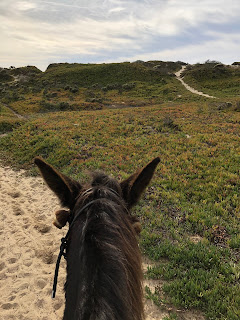 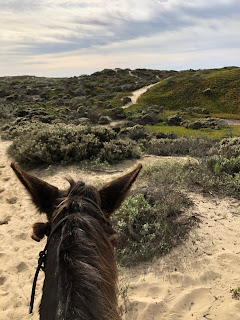 We began our walk by exploring the trails that traverse the inland side of the dunes.
The diversity of flora is astonishing, from a variety of native grasses and bushes to the invasive and beautiful ice plant. 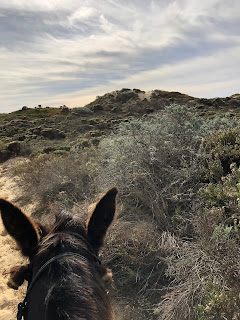 From the ocean it looks like sand dunes, but from the inland side there are hills and trails that are bordered by dense vegetation. 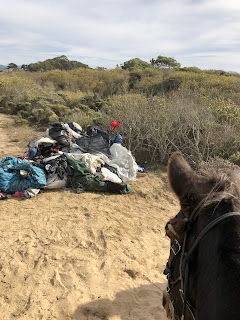 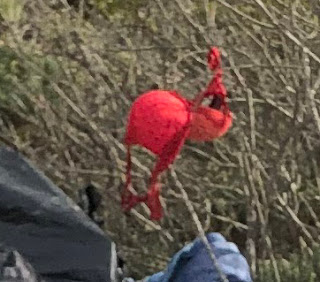 And then there are the sorry piles of trash, evidence of human attempts at habitation. The red bra looked like it had a story to tell! 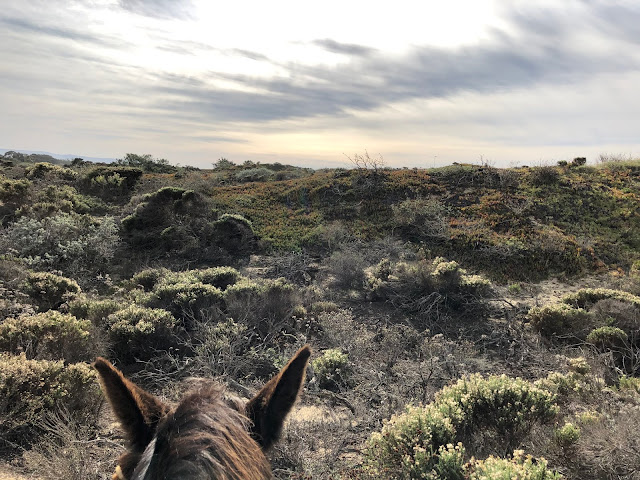 For Tobe and I, just getting back to being able to ride is enough, we aren't picky about where we go. Being able to explore a new biome of flora is an intellectual challenge for me, to see how many different plants I can recognize. Tobe Mule, on the other hand,  likes to sneak a taste here and there to see what might be edible. 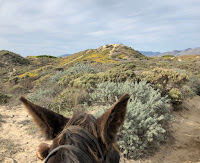 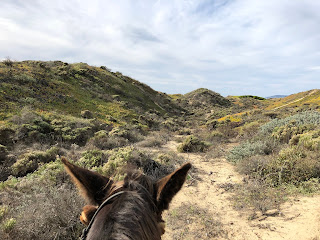 And this landscape is just at the beginning of its season of renewal. After the hot summer the recent rains are calling it back to life and blooms are appearing. 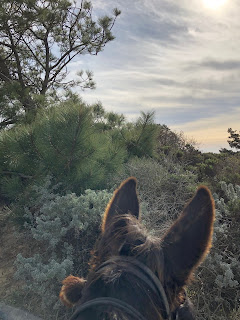 In some of the more sheltered areas are tall Monterey Cypress trees, and while we only saw birds there are certainly many species of rodents and small mammals calling these dunes home. 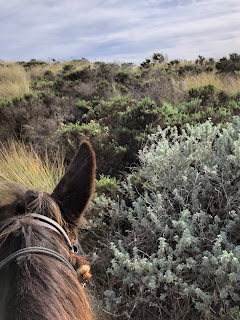 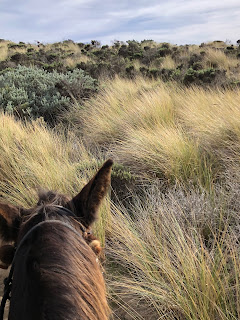 There was just a little wind today, enough to move the grasses in a wave like undulation. 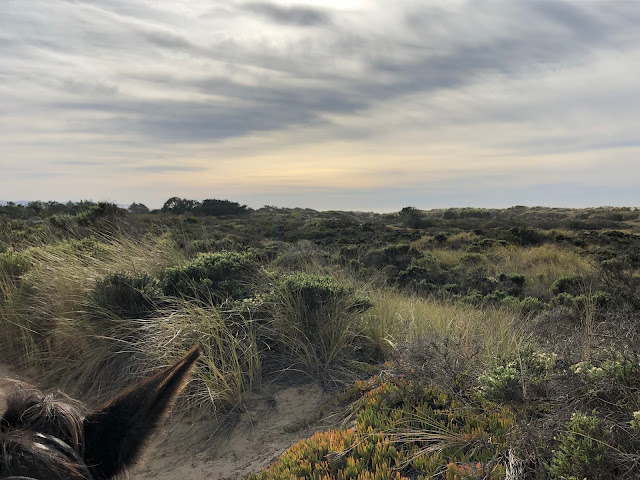 From the higher points on the dunes we could see over the tops of the plants to the bright shimmer of the sea beyond. 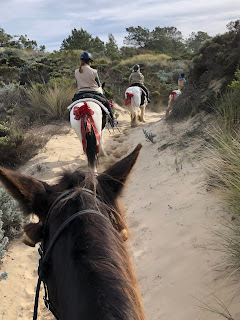 And on and on the parade continued. Most people recording photos of trail rides take nothing but butt shots of the animals in front of them. I usually never do, but these were Vanner butts with big red holiday bows! 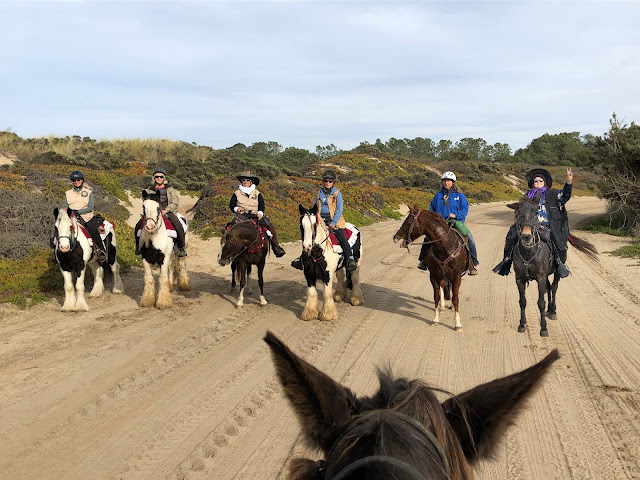 And here is the whole crew. You can easily tell that the Gypsies are celebrities, they face the camera with a smile, ambassadors for their breed. But both of the brown Quarter Horses were like kids on a school field trip, being a bit obstreperous. Tobe flops a skeptical ear. 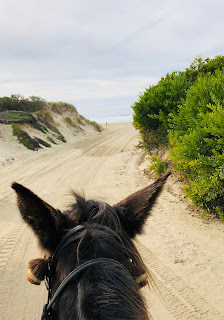 Tobe Mule was his usual steady self, but being a Kentucky Mule he's never quite reconciled to this giant lake with the unnatural movement. 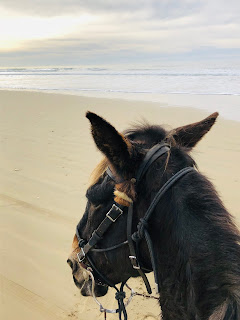 In fact, once down on the sand he was determined NEVER to get his feet wet.

I was not in a mood to force the issue, now was not the time to ask for more from him.

Enough that he is my Centaur legs. 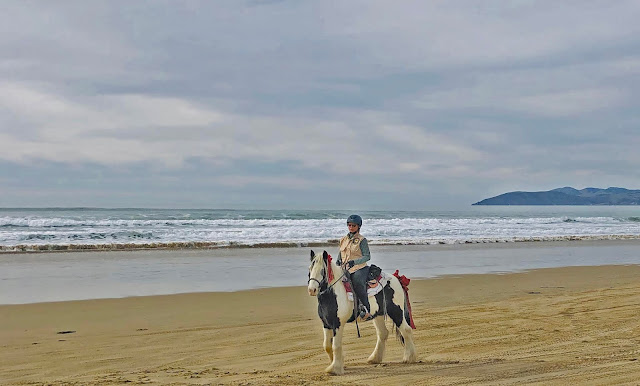 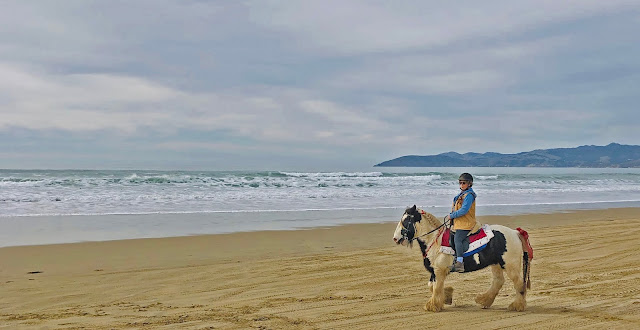 I like to ask the people I ride with to pose so that I can give back to them a portrait. It is rare for equestrians to have nice action shots of themselves riding, and because I appreciate their companionship and assistance in my returning to riding it is a gift I can give them back. 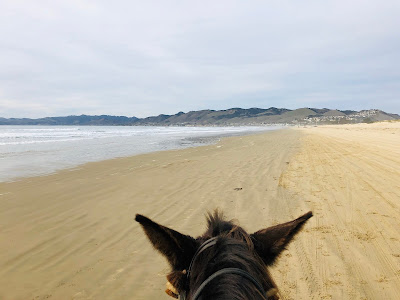 And then it was time to turn and head back to the rigs. 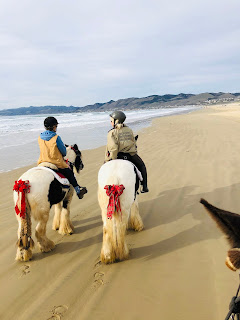 Back to the urban everyday, hitting the highway and heading home, having been refreshed by the time spent in good company in the natural world. 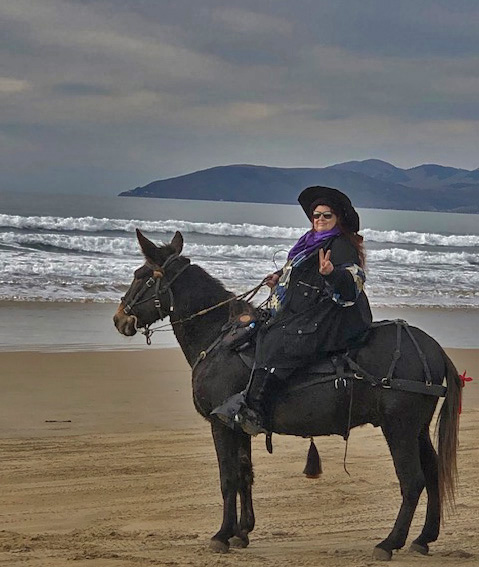