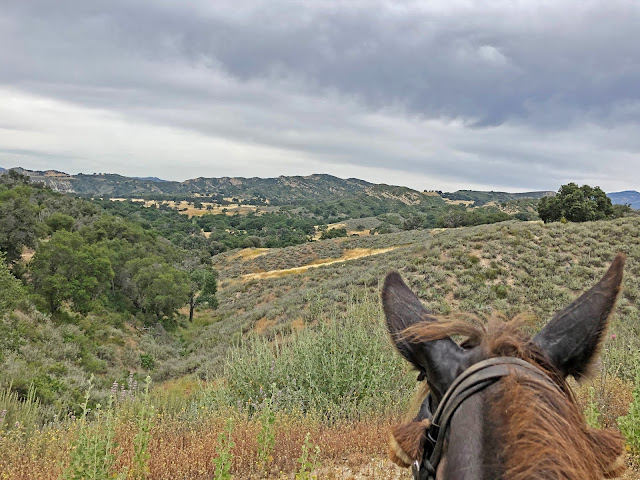 In this magical part of the year, when spring flowers are blooming and the summer heat has not yet begun, we strode out to ride from the Live Oak Camp and explore new trails. The sky was overcast, a slight breeze was blowing, and we had a goal to ride a slightly longer trail than recently. We succeeded.
In 3 hours we covered 7.4 miles, and a very nice time was had by all. 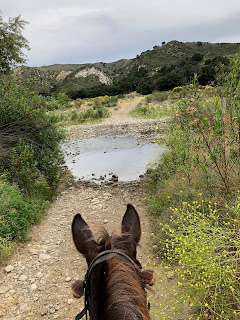 The trail begins with crossing the Santa Ynez River, already somewhat diminished from last week. Soon it will disappear underground for the rest of the year, so we enjoy it while we can. 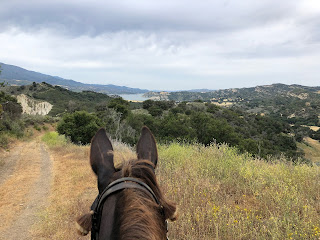 Seeing the lake on the horizon is so special. Just as we relish living on the coastline, the Edge of the Continent, having a lake to circumnavigate enhances our rides. Created in 1953 by the creation of the Bradbury Dam, a mountain valley became the main reservoir for drinking water for the city of Santa Barbara. 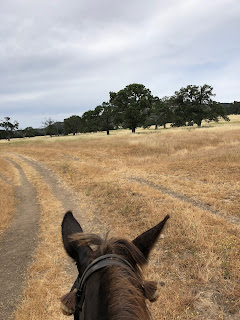 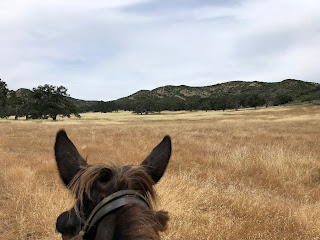 Today we chose a route that took us out across the open plain. 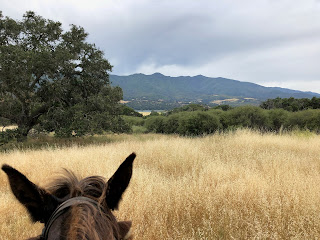 That put us down almost at lake level, in a sea of grass already sere and soon to be burnt off in summer. 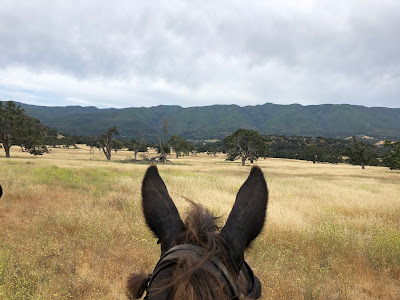 Away off on the edge of the valley we saw tiny specs that definitely caught Tobe's attention.

And there they are, part of the band of wild bucking horses that roams this property. 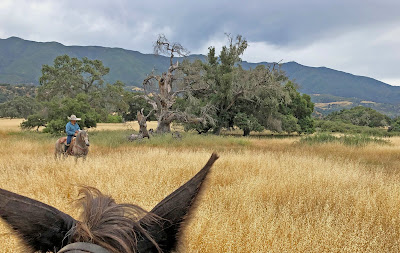 And in another direction, resting underneath an old oak tree, was a deer. 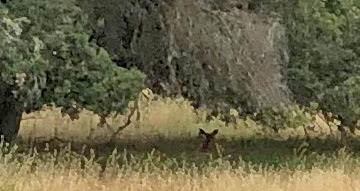 It is somewhat humbling to ride a hyper-aware prey animal and pay attention to the things that catch his eye, things a mere human works hard to see.
We started to rise up above lake level and I chose this scenic backdrop for the souvenir portraits. 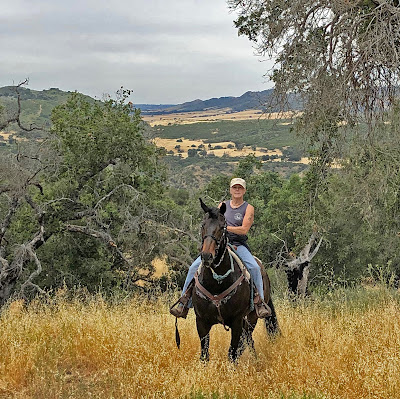 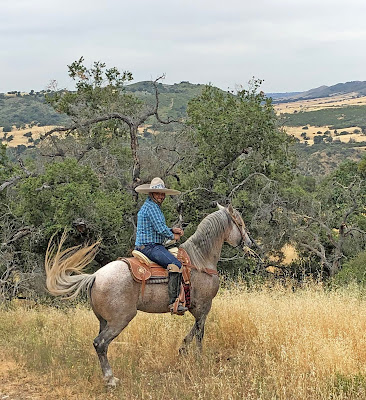 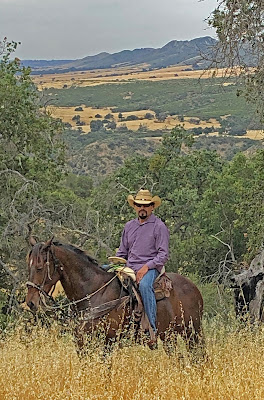 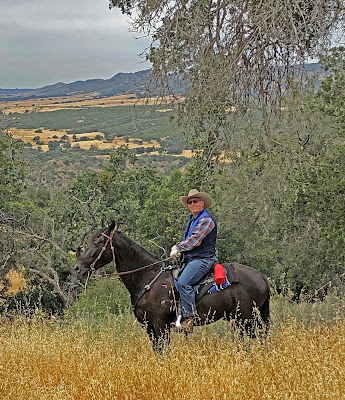 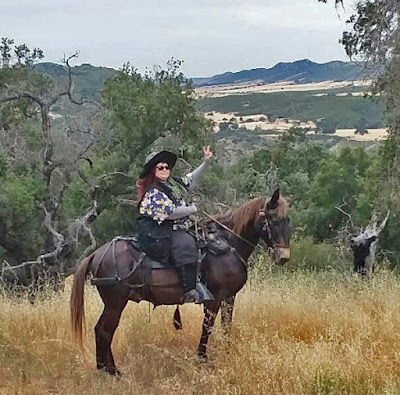 and of course Pat on Tobe Mule
A fine crew. 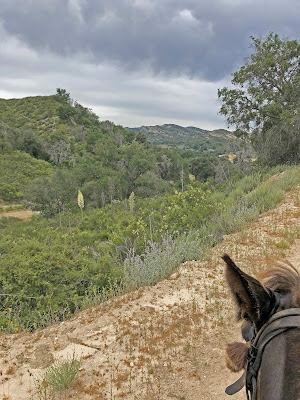 We continued to wind around, seeing lovely views, partly on a trail I had not been on for several years. 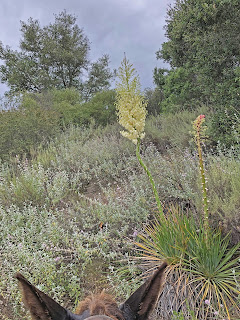 Everywhere the tall spikes of yucca in bloom dot the landscape. This one close by the trail had a fully expanded bloom as well as an uncurling one directly adjacent. 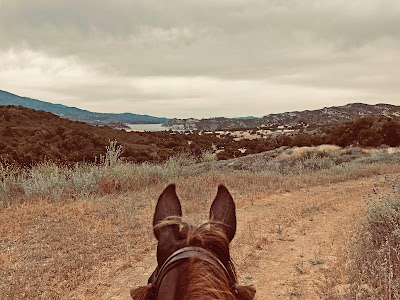 And every so often, at a turn in the road, another view of the lake appears. 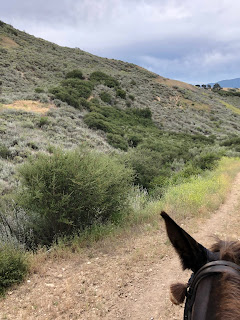 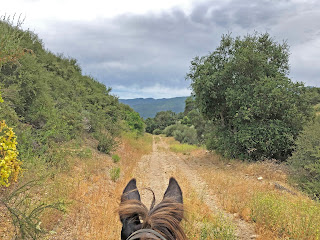 The smell of the sage and artemisia, California sagebrush, especially on a moist day, adds a further dimension to the experience. If only blogs could have scratch-and-sniff.
But all too soon we were back at the river 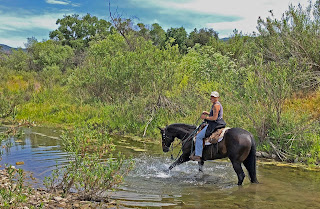 Where Mosca did a splashing dance to celebrate another ride well done. 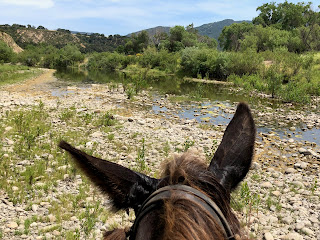 And before turning back to the city, with Covid-19 isolation and riots in the big cities, we stopped to savor the beauty and fulfilling nurture of nature. 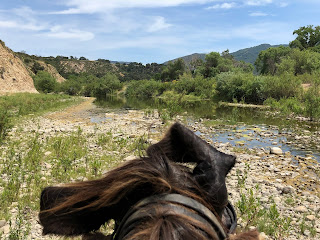 And for his last trick, Tobe Mule demonstrated the malleability of his collapsible ears. If a gnat dares to fly into them he flops his head until the bewildered insect gives up and exits.
He is always ready for any annoyance on the trail.
And I appreciate very much his willingness to be my legs, to transform this Sagittarius born in the year of the Horse into a Centaur. 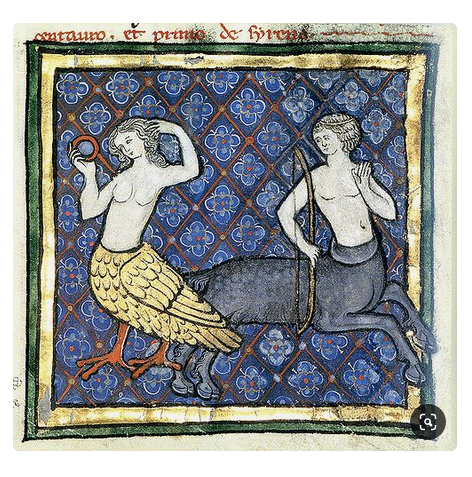 “Never," said Hagrid irritably, "try an' get a straight answer out of a centaur. Ruddy stargazers. Not interested in anythin' closer'n the moon.”
― J.K. Rowling, Harry Potter and the Sorcerer's Stone