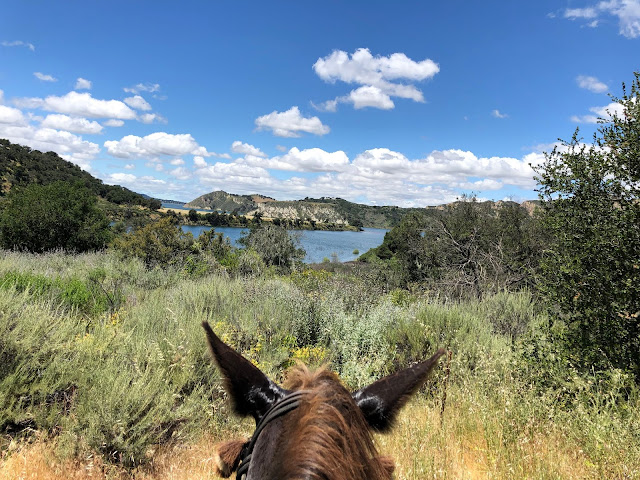 A windy sunny day and Lake Cachuma 70% full on the horizon, what an absolute delight to be back out in nature
with trusty Tobe Mule and a fine group of companions.
Locked down no more, we are taking back the trail! 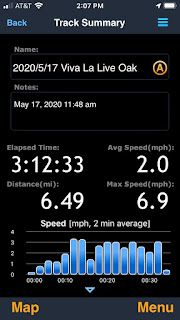 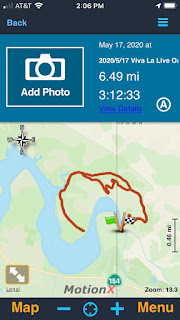 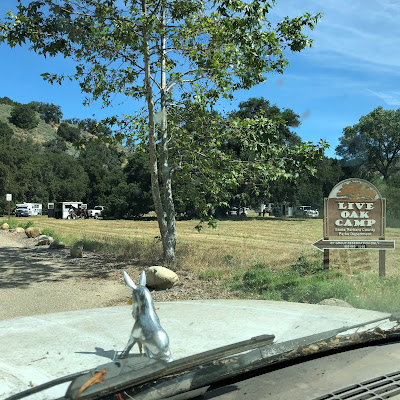 Pulling into Live Oak Camp there were more horse trailers in the parking area than I have ever seen. Due to the Covid-19 pandemic panic most of the National Forest and City Parks are closed, and trail head parking for the few trails open is often limited to one hour, preventing equestrian access.
But Live Oak, such a fabulous favorite place to ride, is open and welcoming. 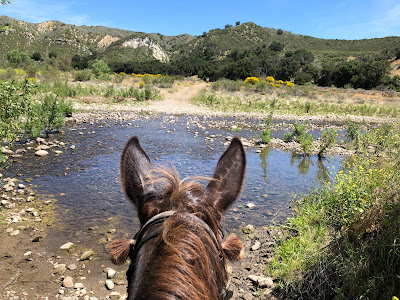 Once we were all saddled up and mounted the first part of the trail crosses the Santa Ynez River, and what a pleasure to see it filled with a foot of water. Tobe took a deep drink, and steadied himself for the coming adventure. 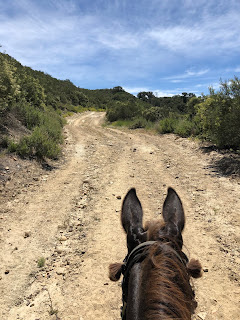 The initial part of the access is by roads big enough for emergency vehicles. After two months standing around his paddock, even this must seem wonderful to Tobe Mule. ME, I'm exulting in the spring flowers and the long horizons and cloud formations. This is the antidote to city confinement. 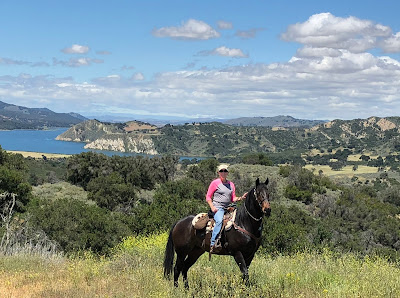 The rise leads to the first view of Lake Cachuma, where I announce it is time for the souvenir portraits. I like to capture the people I ride with and give them this gift, as thanks for accompanying me and helping me experience this vital part of my life.
Above is Jamie on Mosca the Horse Fly. 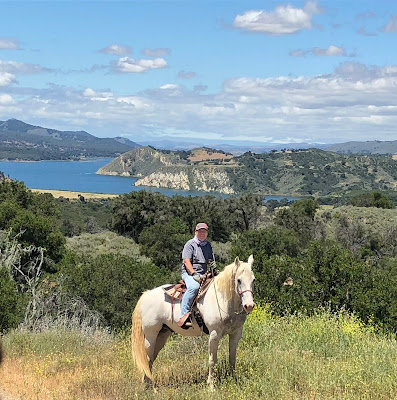 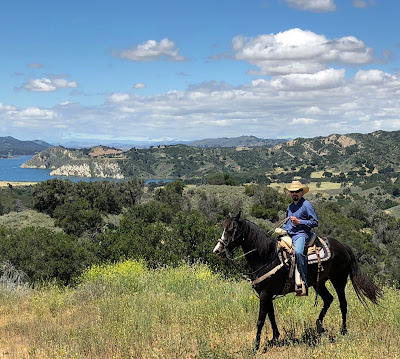 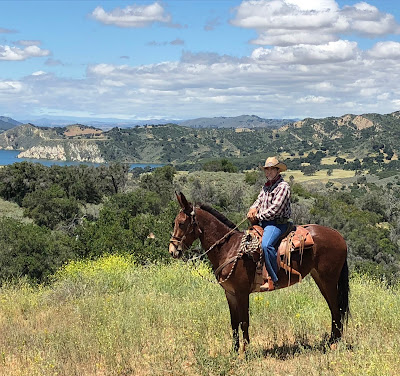 This is Arturo on his new mule Golondrina. 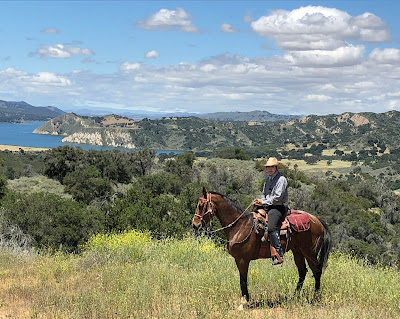 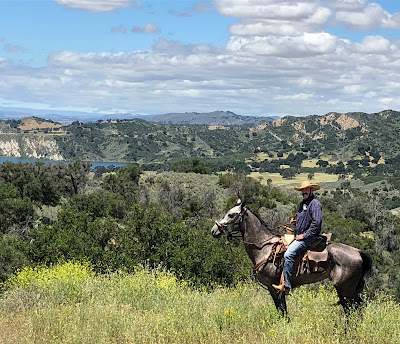 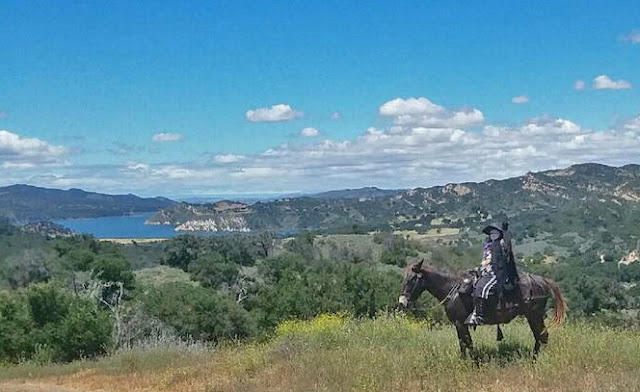 And Tobe Mule and I. 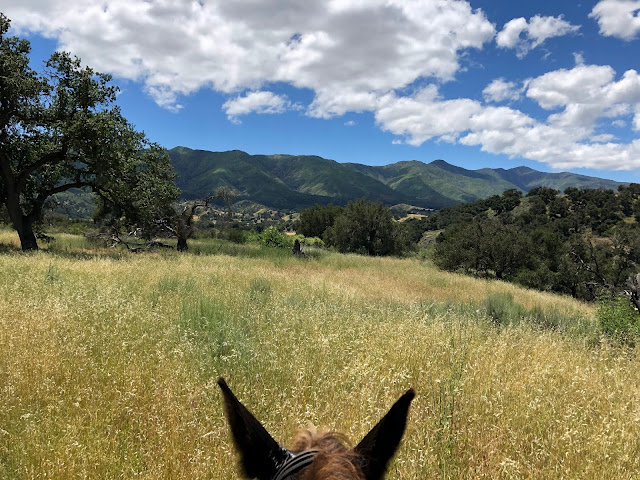 When we left downtown Santa Barbara it had been drizzling overnight, and the air was quite humid. But once over the front country ridge it was a typical Santa Ynez Valley bright day. This view is looking toward the ocean which is just on the other side of those mountains, and you'd never know these fluffy clouds are part of a weather system that would greet me with a dense fog over the ocean when I descended later in the afternoon. 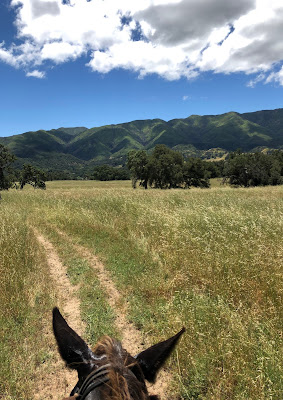 I was just so happy to be out there that it didn't matter to me what trail we took. So when Noë headed off toward the peninsula, a trail that would bring us to a dead end, I let him lead on.
At one point a whole swarm of bees passed through our group of riders. We just kept on moving, as thousands of bees flowed around us and moved on, and the air was thick with them and the buzzing so loud... No panic, and soon they were gone, on a mission to find a new home. If any of us had swatted and killed even one we could have had a real rodeo on our hands. 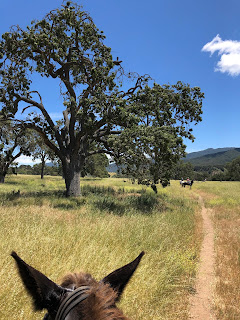 The oak trees got a good watering this winter, and are making a fine come back from the 8 year drought. Ones this big are hundreds of years old, and have a timeless quality. 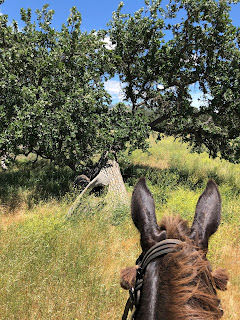 This is one I always like to see, it crashed to the ground but is still surviving, with magnificent bark and one portion that has a perfect animal den. 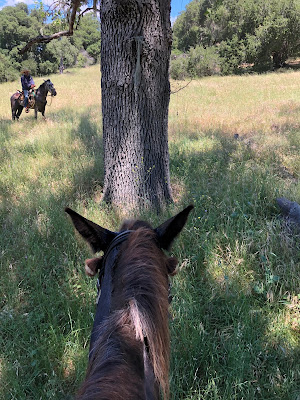 After we turned around we stopped under some oaks to let the animals graze. This oak also had wonderful densely furrowed bark. 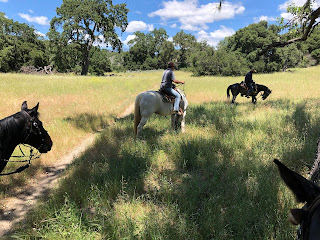 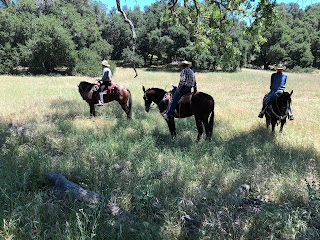 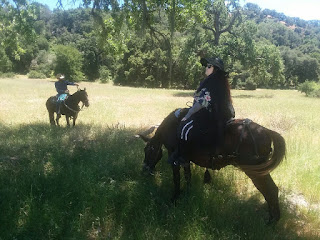 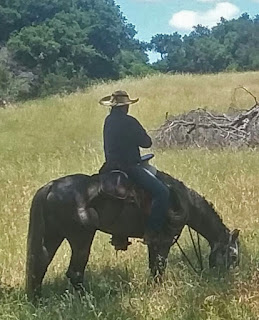 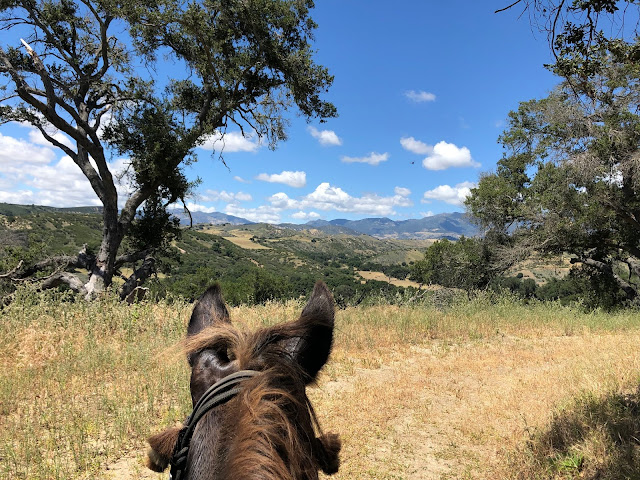 On the way back the view looks to the East, inland to the mountain ranges that stretch out to the interior. Coming up from the City, in 45 minutes you are in this place where a look in that direction puts the scope of California into perspective. There is essentially no one home for as far as the eye can see. 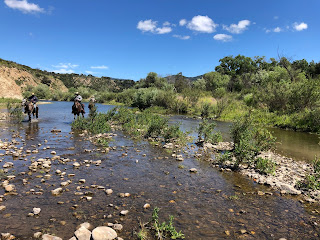 Back to the beginning of the trail, nice to let the animals cool their hooves in the river now that their job is done. 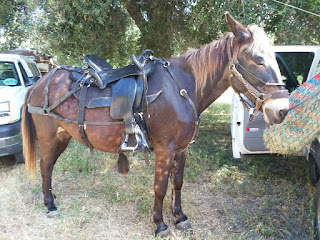 While the humans broke out lunches and sat under the shade of a big oak in the parking area, Tobe had a bag of bermuda hay and a chance to model his new saddle before he was stripped of tack and let relax.
A fine time was had by all.

This blog is dedicated to Queen Elizabeth. 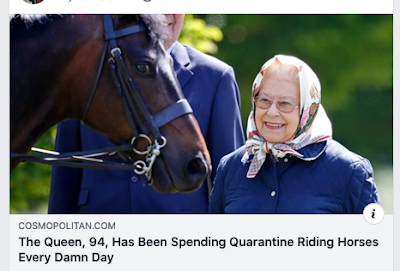 I wanna grow up to be just like Herself.