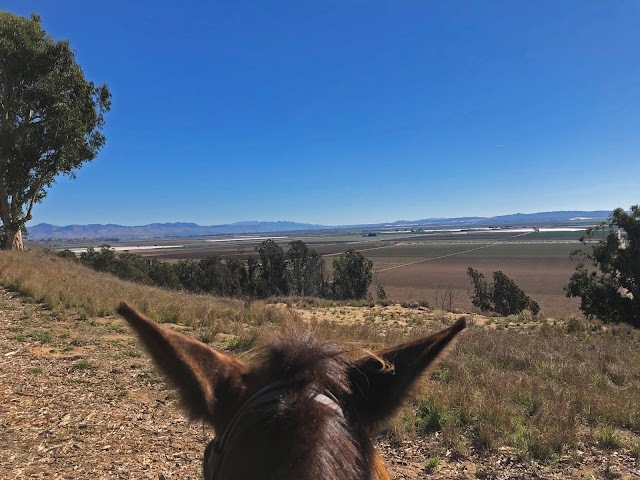 Looking from the Nipomo Mesa to the agricultural fields below. 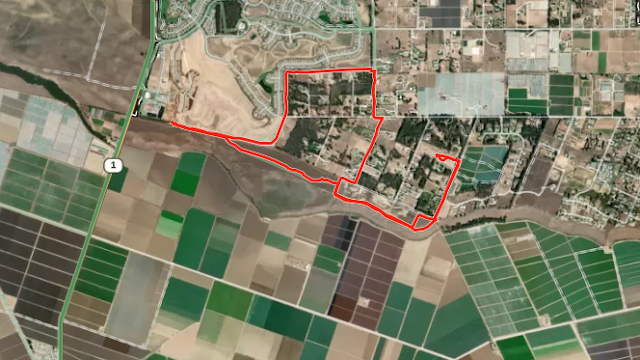 The middle of January, when equestrians in other parts of the world are slogging through snow.... it was a 86º day in Nipomo, hot and bright and just right for a tour of the Mesa and Western edge of the community. 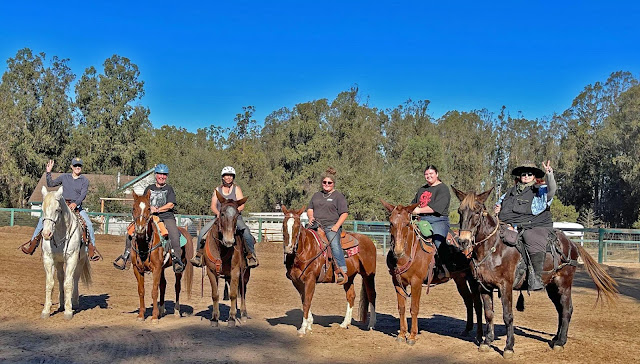 For the first time ever we had an equal compliment of mules and horses for a ride. We staged out of a local equestrian facility and headed out, following our Pico Tour guide. 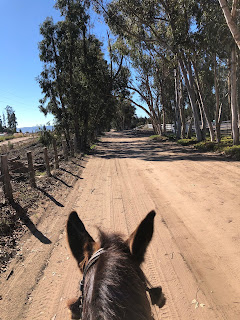 Nipomo is a very newly developed area. Within the memory of the people I ride with there ALL of the land now gridded up into estates and ranches was eucalyptus forest.

Many of the roads are still dirt, so it has a distinctly rural feel and is decidedly equine friendly. 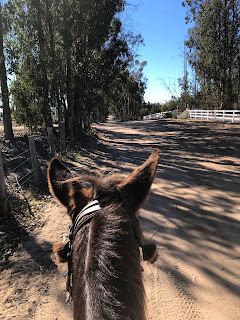 It was HOT, so we savored being able to walk in the shade of the massive tall eucalyptus trees that still line the roads.

On previous rides here we have tracked through the planned community called Trilogy, but I was pleased that today our guide had a different plan for us. 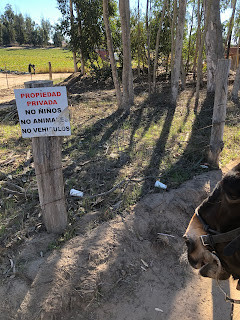 Like the homes of country folk everywhere, the ranches were full of barking dogs and signposted to prevent access. NO ANIMALES! 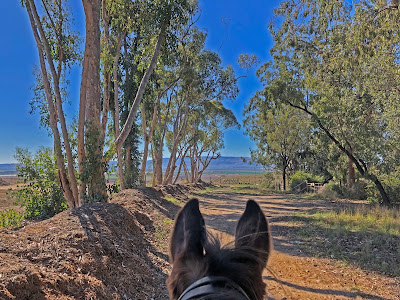 We walked to the end of the street and suddenly we were in the old days, the one part of the Mesa that has not been developed. 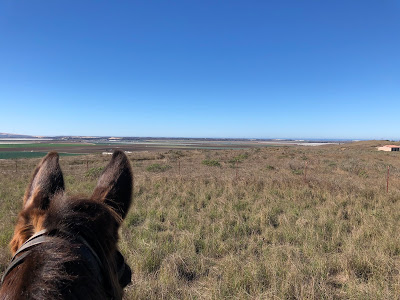 Looking out to the West, across the agricultural grid the sand dunes and the sea are visible. 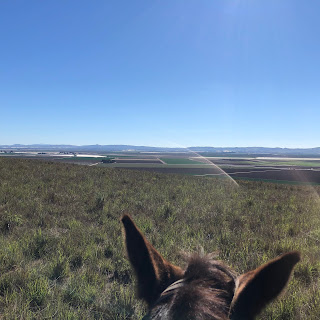 While looking to the left, to the South-East, the regular patterning of the crops stretch off towards Santa Maria and the mountains behind. 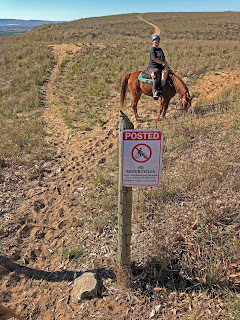 Our guide Stormy has logged literally thousands of miles on this elevated patch of scrub grass on her trusty Arabian horse Pico.

She led us onto trails that were barely visible, with the avowed purpose of re-establishing them before they were lost.

Despite the numerous gopher holes in the sand we did our best to stomp them clear. 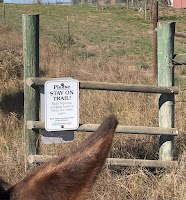 There is a strong equestrian community here, and a covenant with the developers of the golf course and housing developments, that a percentage of the land must be set aside for trails connecting all parts of the acreage. 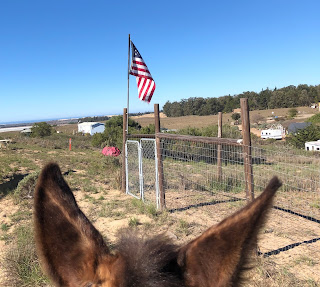 With the nation in turmoil politically it was a pleasure to see this property on the mesa flying Old Glory. I wanted to pose people next to it but the dogs behind the fence were so frantic it seemed best just to shuffle on past. 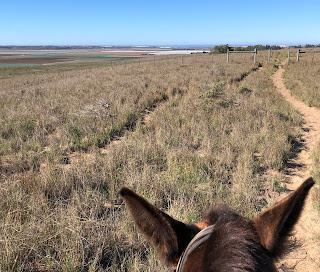 There are trails all through the Mesa, all soft sand that has a zillion gopher warrens beneath. So progress was slow, punctuated with yelps when an animal stepped in a deep hole and the rider was surprised. 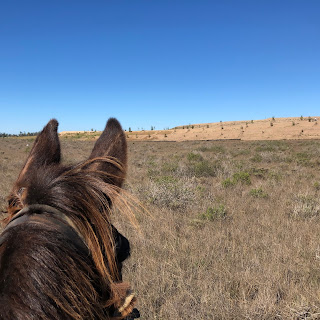 Looking in towards the buildings the attempts at landscaping and erosion control were visible.

Many of the eucalyptus are a century old, and are being removed and pines put in their place.

But the Mesa's grass is eternal. 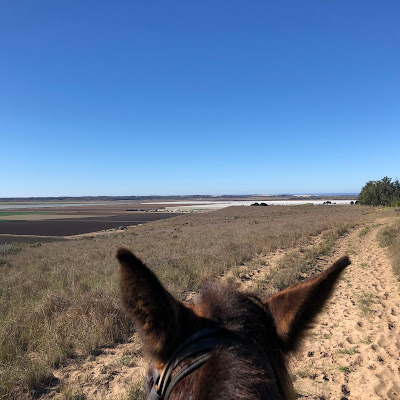 Out across the white plastic covering growing crops the white sand of the dunes and the blue of the sea are just a few miles away. 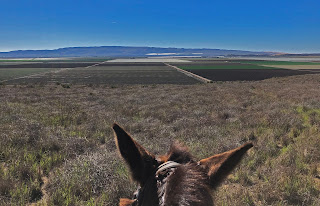 But I found myself marveling at the organized grid pattern that fills the entire valley with intensive patches of individual crops. Refer back to the map at the beginning of this blog, to see the regularity. 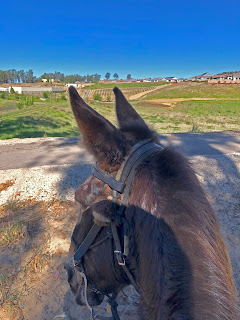 When we got to the end of the Mesa we turned inland, and walked along the edge of the developed areas. 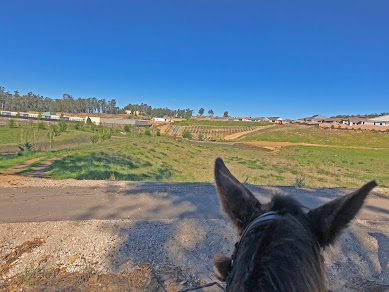 We stopped in the shade to give the creatures a rest. Tobe Mule is always a good sport, wherever I trailer him to he is willing to be my legs and take me to see what there is to see. 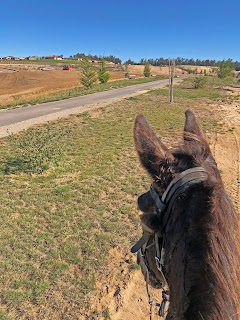 Here, perhaps we are looking at the sort of Planned Community that may become more popular in the future.

Trails for bicycles and walking paralleling ones for equestrian use.

On old idea whose time may come again. 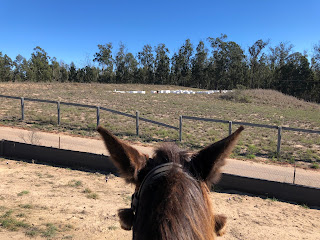 Parked in this field it was interesting to see a large number of Langstroth bee hives. They may be resting up here, before taking to the road to pollinate crops throughout the annual cyclical seasons. 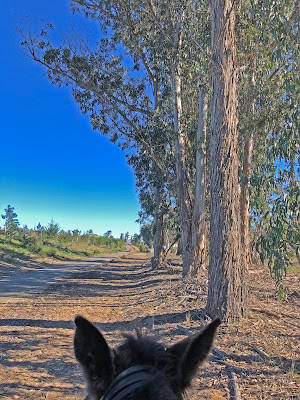 But these are the paths that really define the town, old growth eucalyptus bordering streets, with trails strewn with a carpet of their fragrant leaves. 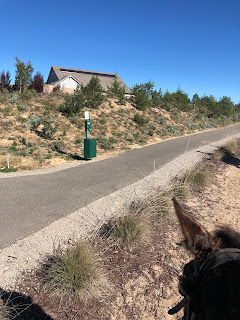 In a civilized acknowledgement that poo happens, the walking/cycling paths are marked with the presence of doggie bag stations with rubbish bins below.

We did see one old guy struggling along in the heat on one of these asphalt strips, and I encouraged him to go adopt a dog at the shelter. On a hot day like today the poor thing would need protective booties on its feet! But he'd have a pal for his wanderings. 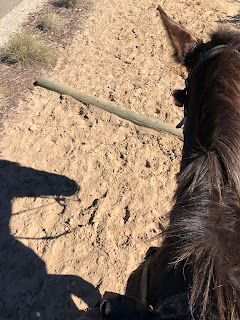 In the midst of a drought these peeler cores at intervals in the trails are just interesting obstacles for the equines to step over, but in a rainy year they'd help stop erosion. 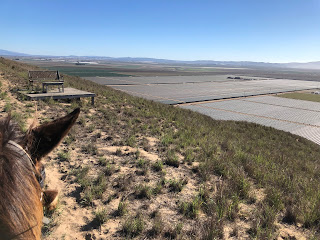 Finally it was time to turn back towards our staging spot, so we went back out onto the Mesa. The afternoon sun now slanting differently onto the fields gave them a much different look. 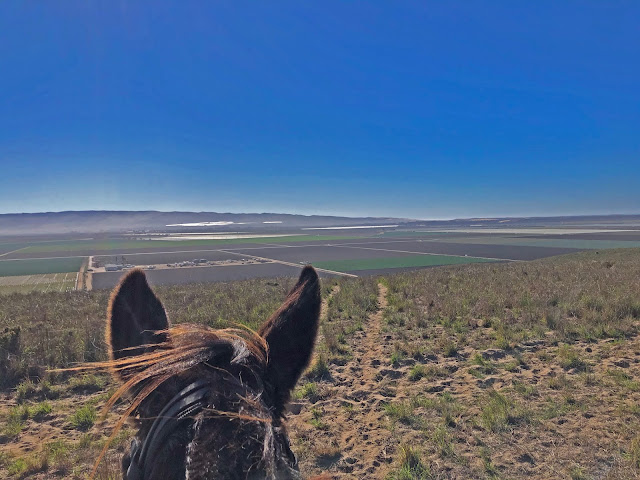 And the wind began to pick up, a nice breeze to cool off the sweaty mule who had well earned his bunch of carrots waiting back at the trailer. 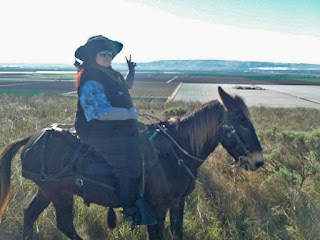 Another day, another place to see, another adventure made possible by the cooperation of human and mule.

“Would you tell me, please, which way I ought to go from here?"
"That depends a good deal on where you want to get to."
"I don't much care where –"
"Then it doesn't matter which way you go.”
― Lewis Carroll,  ALICE IN WONDERLAND