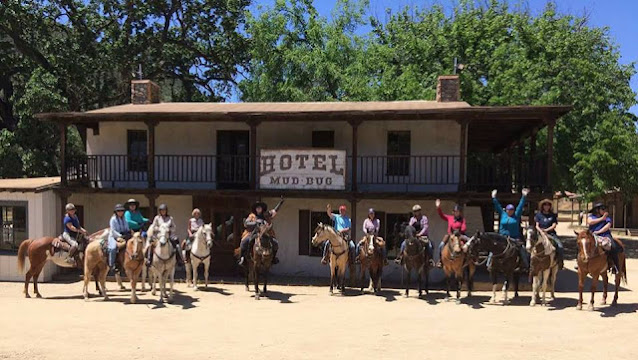 This is the once upon a time memory of what Western Town was. 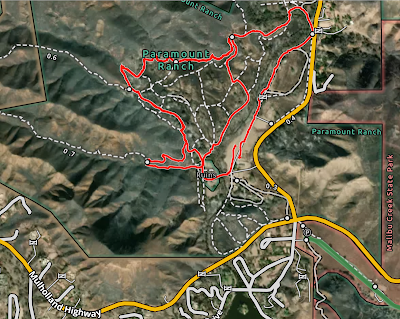 Today we drove down to Agoura to the Paramount Movie Ranch in the Santa Monica Mountains National Recreation Area, and went on a short ride to the NorthEast part of the property. 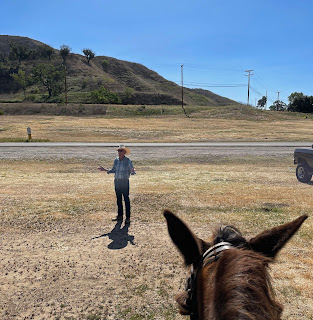 We started with a lecture from a long-time volunteer who explained the history of the property as a location for hundreds of films, starting in the 1920's. 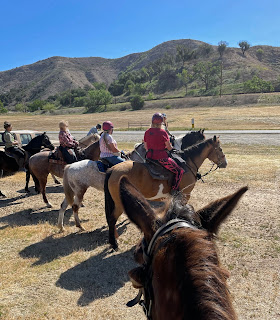 We listened to the story, but I was dreading what I knew I must see as soon as we crossed the bridge. 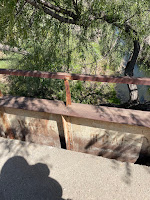 I have ridden here many times, and even during my times as a movie extra in high school once played a midwife delivering a circus performer's baby in a barn! 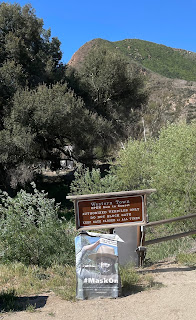 There at the bridge, the sign for Western Town, but with a faded and pathetic social distancing mask sign next to it. 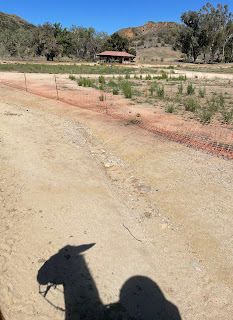 But it was true, nothing left of the town.

Well, the train depot, and the church built fairly recently for the series "Westworld". 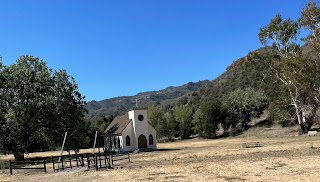 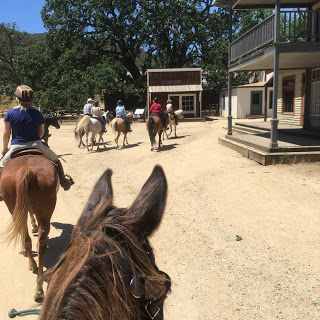 It used to be such a thrilling thing to ride into town. 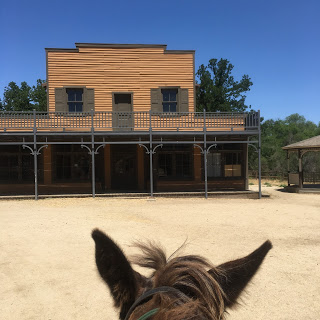 We could pretend we were going to tie up in front of the bar and go in for a whisky for parched throats, and listen to the piano. 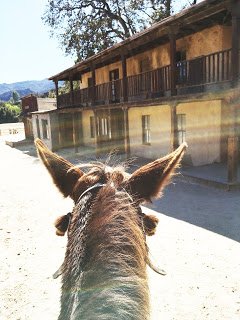 And how many times did I see this building in a film,

with a mounted cowboy below wooing a senorita above on the balcony,

or a shoot-out and a stuntman crashing over the railing and down to the street below.

The man did say that efforts are being made to raise money to rebuild the town, but it won't be like it was.   Sigh. 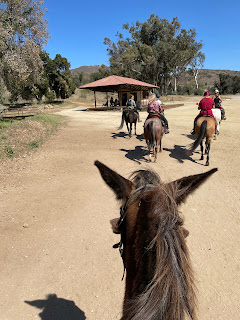 So we headed out onto the trail, past the train depot. 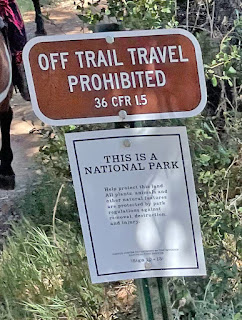 We saw almost no one on the trails. 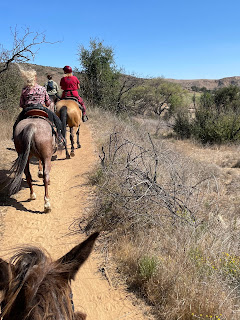 The evidence of the fire that burned up Western Town 18 months ago was everywhere, burned trees among the returning grasses. 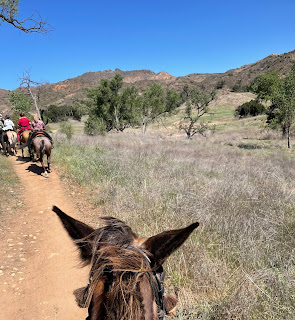 But as always it is a lovely landscape, grassland meadows and a restful surrounding mountain range. 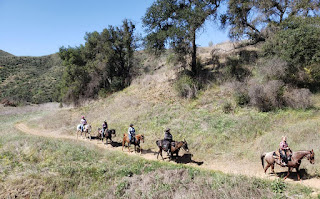 We had ten riders, some from the ETI Corral 36 who walked over from where their horses are stabled nearby. 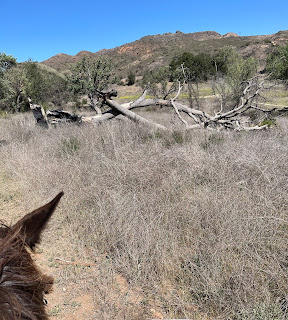 The grass is just starting to turn into the parched summer cover, and the skeletal remains of huge burned trees lie in the fields. 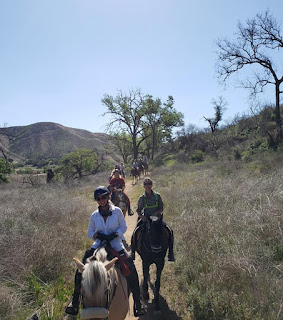 But the important thing is that we are out in the fresh air, riding our animals, and in good company. 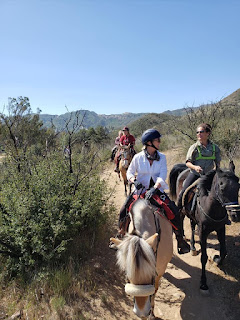 As always there was a fine assortment of different breeds of horses, although as is so often the case Tobe was the only mule. 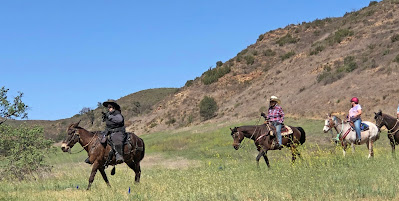 That's OK with us. 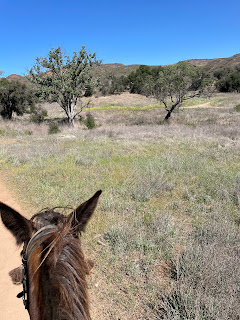 What matters is being out in nature.

Nothing finer than exploring a new trail on the back of a willing equine. 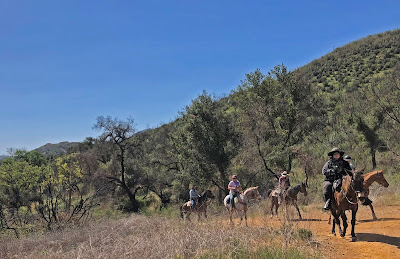 And doing so with nice people gives safety on the trail and the opportunity to follow a knowledgeable trail boss and explore. 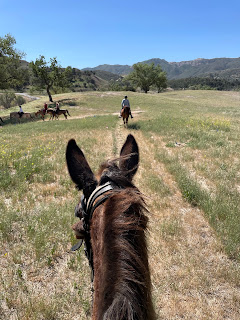 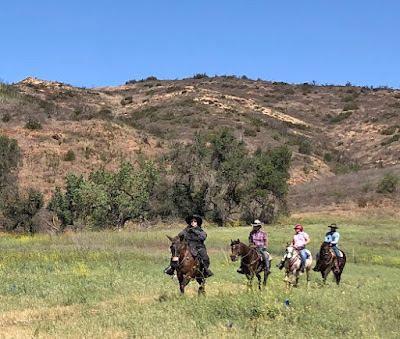 Always we are glad we are out with others, insurance against the possible untoward event. 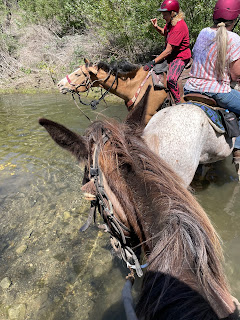 Toward the end of the ride we came to a water crossing, and the animals were all grateful for a drink and cooling off their hard working hooves. 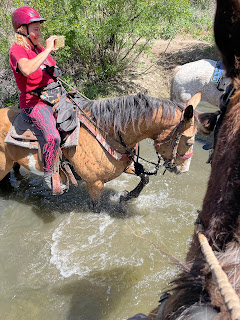 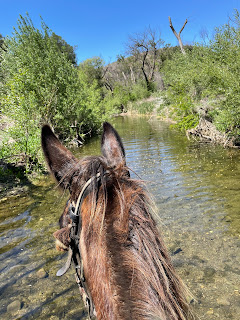 Tobe just has a nice drink and contemplates nature. 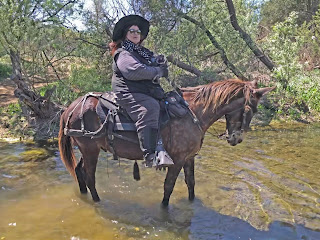 And I am grateful for another day in the saddle.