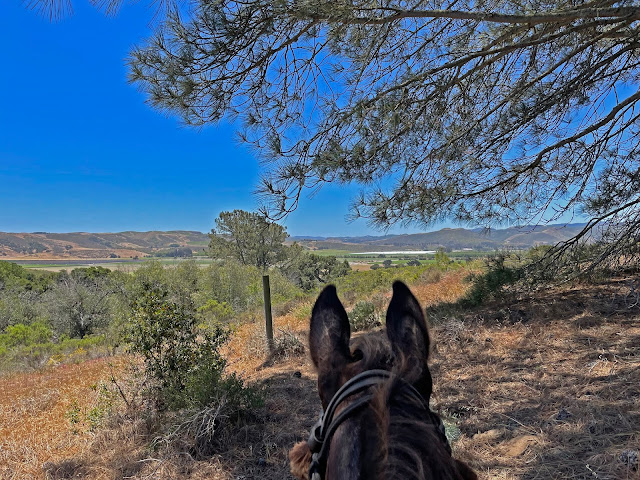 We knew it was going to be a very hot day, so the MeetUp opted to ride on the grounds of the Mission La Purisima in Lompoc, CA. A cool onshore breeze often plays across this property. 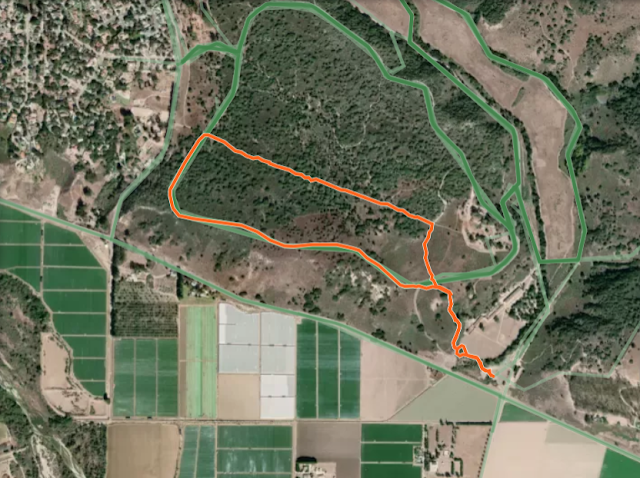 It was not a very long ride. But it was enough. We just wanted to get the animals out, no plan, and we went to a part of the property I had not yet ridden.

We always start out from an equestrian parking lot across from the Interpretive Center, that building on the left side of the photo above. But see that spec between Tobe Mule's ears? A mule deer! I had just mounted up and he alerted to the deer with avid interest. 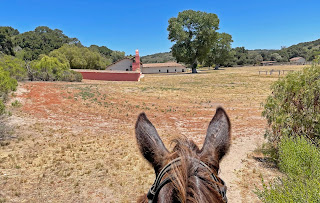 Often we go up the trails to the South, riding the fence line toward the back of the property, but today I wanted to go to the high mesa on the Western side of the grounds, thinking correctly it would have cooling winds. That track took us around the side of the Mission itself, where mules and horses are forbidden to stroll. 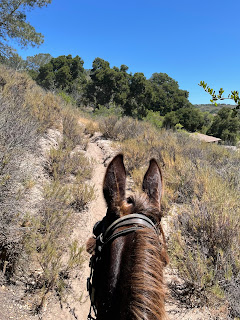 But we are happy to head up the hill.
I'm kinda gimpy these days, and so the feeling of my mighty mule with his four good legs taking us straight up the sandy track is wonderful.
We are a fine team.
My own two legs couldn't get me up this, so I deeply appreciate Mule Power. 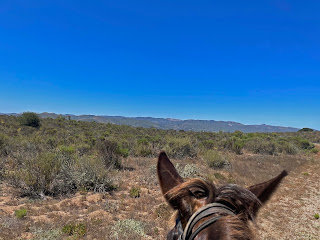 Not much has ever gone on in this portion of the Mission grounds, any agricultural efforts went on in the valley below. So this part just has sandy trails thru scrub chaparral. The mountains on the horizon are the coastal range on the other side of Lompoc. 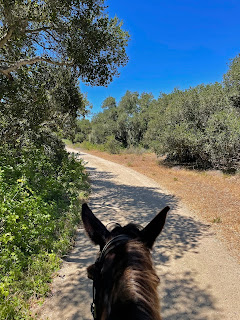 Last night I was watching the Lord of the Rings movie, so today I found myself humming "The Road goes Ever On...." as Tobe and I strolled through the landscape. 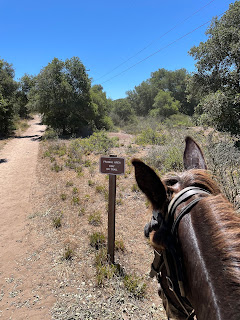 Of course we do obey the rules, and stay on the roads and well marked paths.

No need to bash through bushes, we want to preserve the beauty of the native plants. 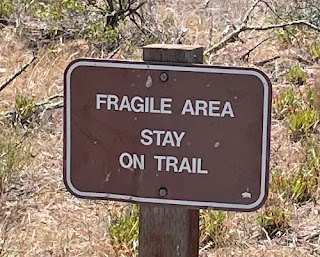 I confess I made my companions stop frequently to take photographs of the many kinds of Spring flowers that were blooming on the sides of the trail... 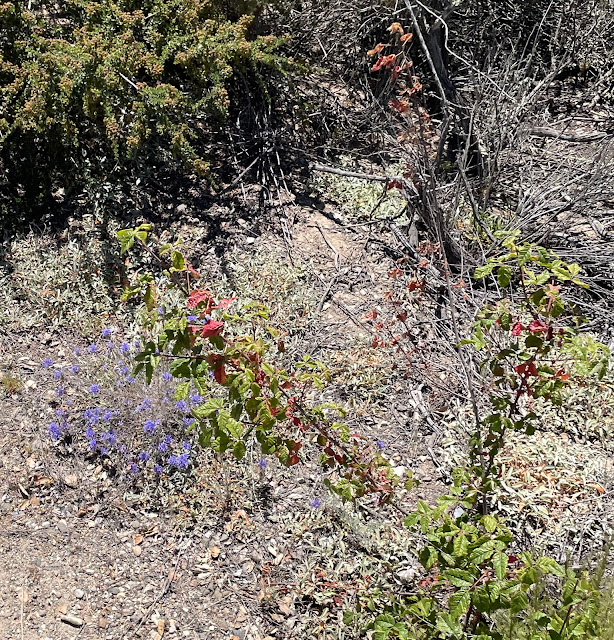 But alas. What looks from mule-back like a fabulously artistic composition of bright flowers just doesn't translate when the photo is taken by an iPhone from 8' in the air. 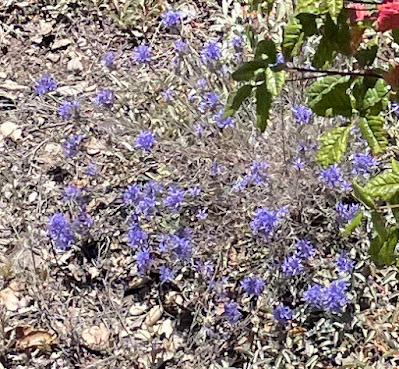 A splash of vivid color, but good luck with plant ID! 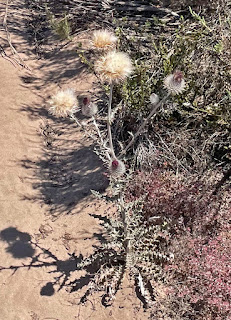 A nice rare image of the thistle in various stages of growth. 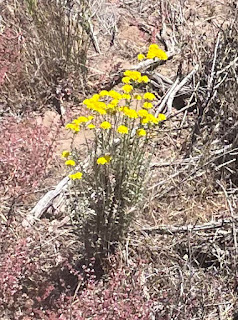 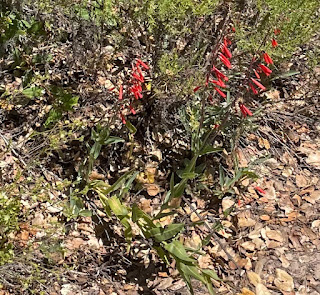 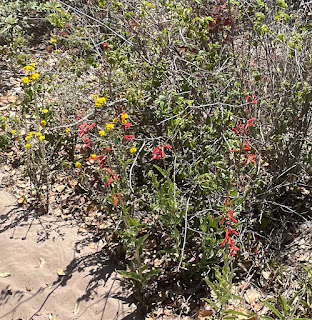 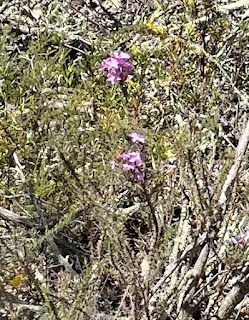 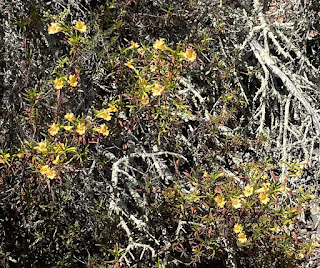 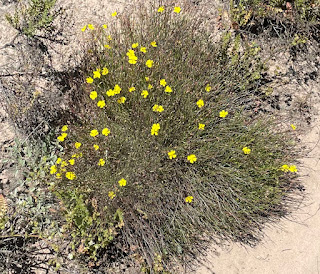 So better that I stick with landscape appreciation. 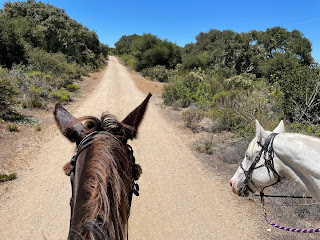 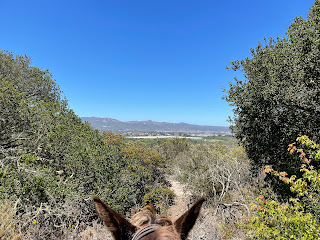 When we looped around and got a look out over the valley it was shocking to see the number of hoop houses out there.

I took this panoramic to try to capture how much of the valley floor that used to be devoted to vegetables is now I think growing marijuana. I might be wrong, but there is a lot of controversy about the massive growth in the number of acres devoted to pot production in the County, and I sure don't think all those hoop structures are growing tomatoes. 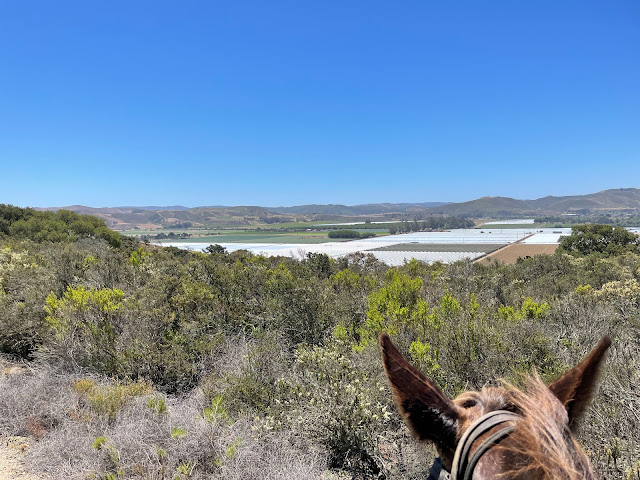 Some of the white could be flat plastic laid down for crops like strawberries, but I suspect that pound for pound every farm that can is going to pot. 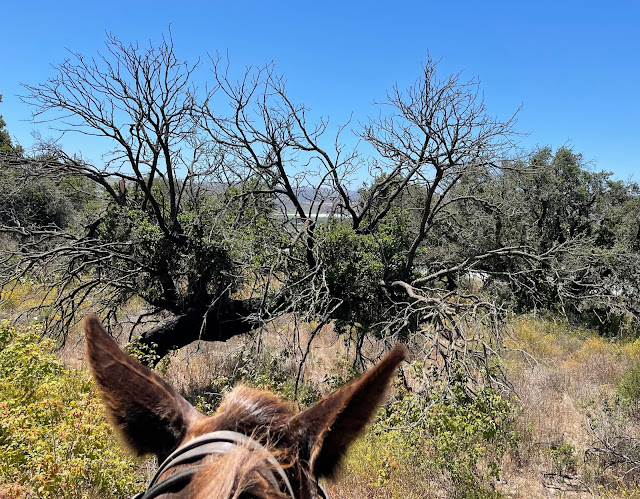 As we turned back toward the starting point, I was so pleased to see this tree that burned 6-7 years ago making a big comeback. Within the skeleton of burned branches all new leaves are forming, symbolic of rebirth and regeneration. 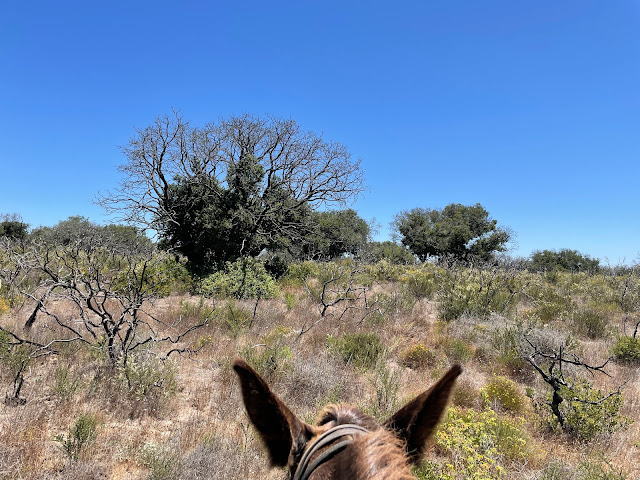 The same regrowth pattern was visible on the other side of the trail with this tree. You can ride thru the chaparral obsessing on all the skeletal branches of the trees that died in that fire, or you can look for these hopeful signs that prove nature will find a way. 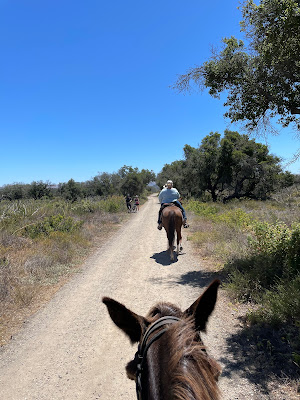 In the same way we can ride trails and worry about bicycle riders, or we can hope for the best.

When we saw these two people riding towards us I gestured for them to stop and they did! Trail rules say bikes are to stop and wait for horses to pass, but we can never count on that. 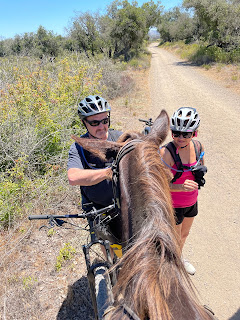 But happy day, these two bicyclists were lovely! It was great for Tobe to meet nice people on bikes, be able to sniff their tires and handlebars and get a good look at what he might otherwise perceive as a threat bearing down on him with predatory behavior. 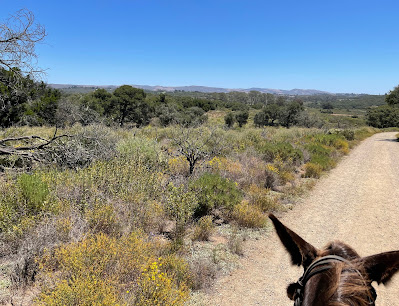 So we continued down the road, and pretty much had this little world to ourselves.

I decided it was time to take the traditional portrait photos. There were only three of us, so not a big undertaking but nice to commemorate. 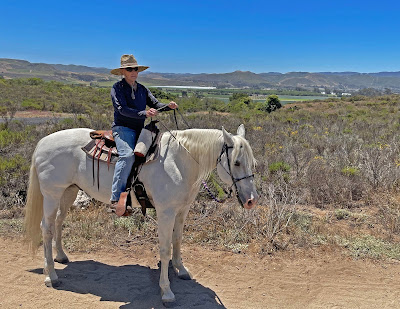 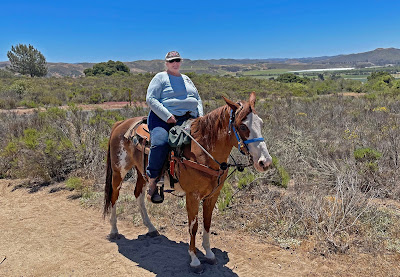 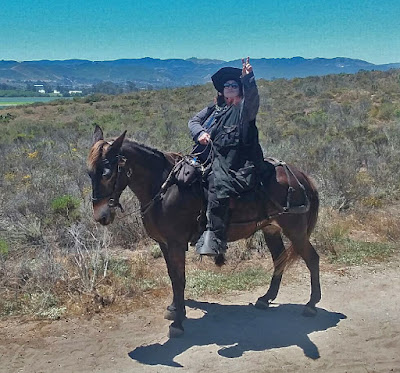 And me Pat Fish on Tobe Mule. 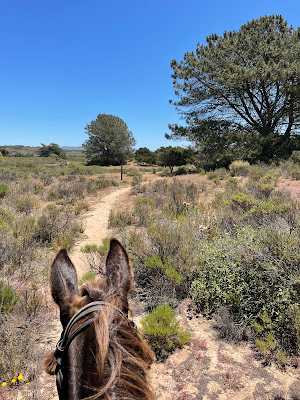 So then it was just over a hill and back to the rigs, and a short but pleasant stroll was a perfect way to spend the middle of the day.

As it has been said: