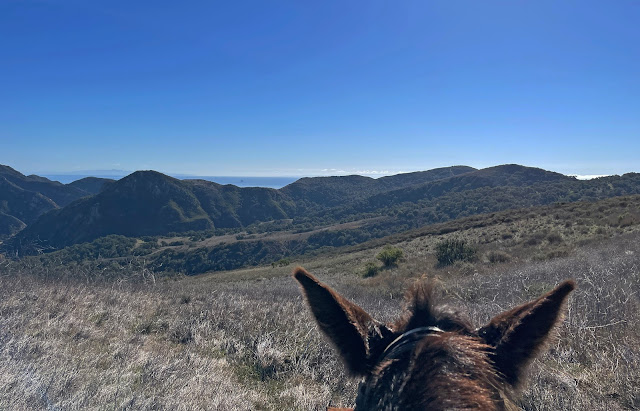 Looking out to the sea and one of the oil platforms, the high view from Gaviota State Park, at Las Cruces where the 101 and 1 split.

As you can see from the map we went up and over and then came back.

It was a view stroll, getting ourselves and the animals out before an oncoming rain storm would keep us all off the trails. 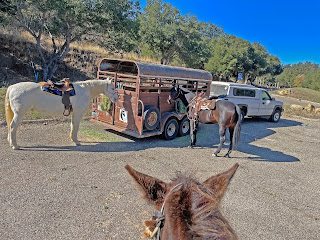 So here Tobe gazes at his compadres, Woody the white, and Mosca the black.

On Jamie's trailer you can see this sticker I made for her.

Of course Mosca is on top. 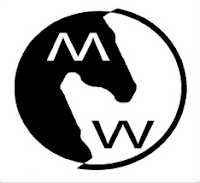 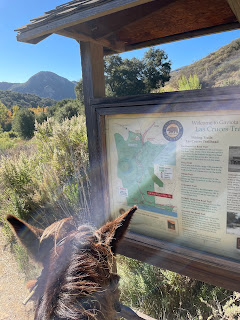 We checked in at the kiosk that SHOULD show the trails, but it does not.

In typical government inefficiency a giant YOU ARE HERE covers any possible detail of the trails. It shows the entire state park, all the way to the ocean, and many of the trails are degraded and no longer passable for equines. 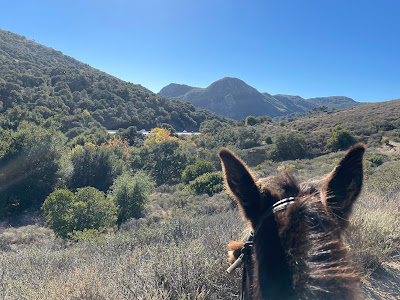 Which is OK, it really wouldn't be possible to get lost anyway. The 101 as shown directly ahead here borders the trails, which essentially go out to ocean views and overlooks and then loop back. 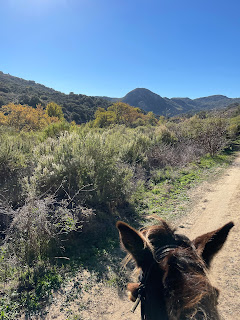 ALL of the trails could be driven on by a car, no perilous mountain tracks for the equines to navigate. Just very long uphill pulls and then long descents. 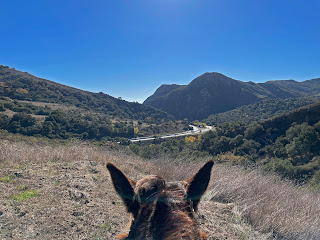 Whenever we get to high points and look back down on the people speeding by on the highway I think how sad it is that none of them have ever taken a hike up here. They whiz by and never know that this lovely bit of forest is just above them. 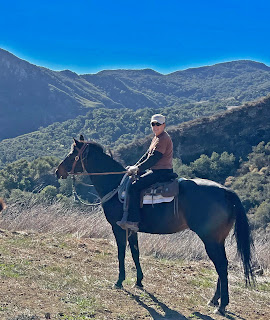 It seemed like just the right place to take souvenir photos, so here is Jamie on Mosca. 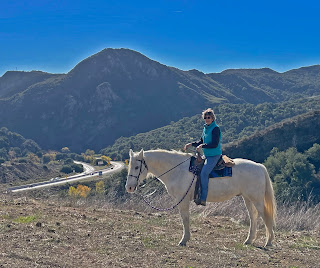 And CC on Woody, shimmering like a white unicorn in the sun. 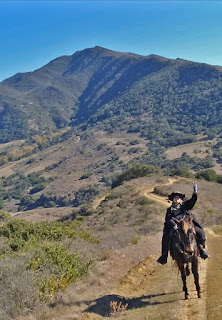 And if you turned and looked the other way here I am on Tobe, silhouetted against Gaviota Peak.

Altogether a splendid location for a Sunday Church of Equine Enthusiasm. 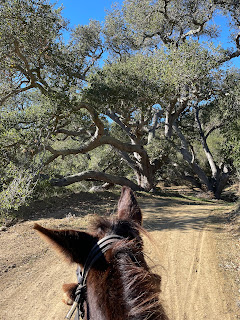 I always like to see this set of trees. They feel like such survivors, bent and tangled and leaning into each other to withstand the onshore winds. 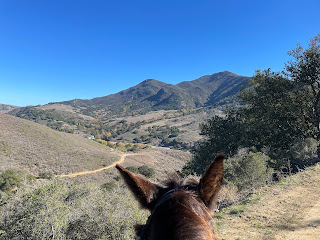 There is something soothing and heart-filling about traveling slowly across the landscape, seeing valleys from different angles, watching the light play across the surrounding mountains. 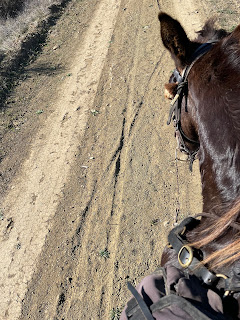 But then there are the bicycle tracks and skid marks in the dirt that remind us to keep a sharp eye out for anyone racing the trails on wheels, moving very much faster that we do. 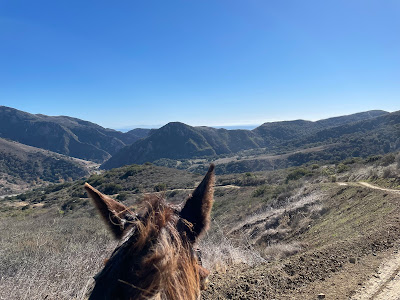 When we get high enough we can look out across the Hollister Ranch acres, out toward the sea. 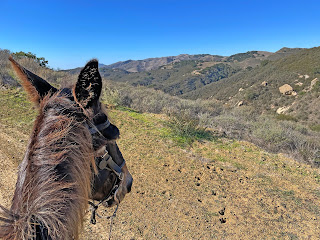 Tobe's eyesight is so much more acute than any human's I know that as we wander along he is experiencing it in a way I cannot imagine. Rather as if a geologist or botanist were with us and could with their trained eye spot rock formations or plant communities that tell them a story hidden from the uninitiated. 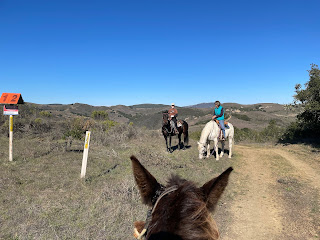 We stopped to give the hard working animals a break and a snack. Humans can, and do, carry water and treats in their saddlebags. The creatures appreciate a chance to sample the grasses growing wild. 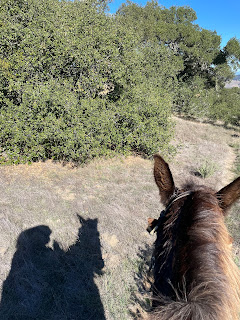 Then I did my stupid thing of the ride.
I had this silly goal of traveling down the Woodland Trail.
We had come up the Las Cruces Trail onto the Hollister Trail, and in previous rides I had seen a trail bisecting the loop that promised a journey through a woodland. 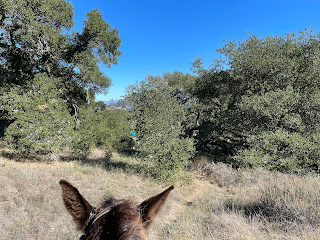 And it looked inviting, being a new trail we hadn't been on.
We needed no more encouragement to go and explore it.
A totally bad idea.
I don't know who ever goes on it but I'm guessing it has been a very long time since any horses or mules went there. Almost every step broke through dirt to squirrel warrens under the trail. It was soft dirt and absolutely riddled with holes, those we could see and many more we created as we collapsed the ceilings of ground squirrel condominiums beneath us. 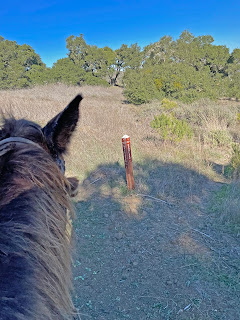 We came, we saw, we retreated. 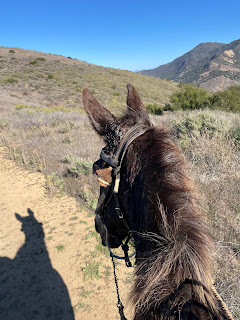 Tobe's shadow is flashing the victory sign.
No twisted ankles or broken legs, no need to investigate that trail all the way to the bottom. 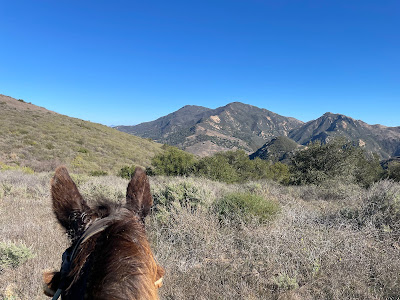 From this vantage point we could look across the 101 and see the other part of Gaviota State Park, and the trail up to Gaviota Peak which we have ridden to in the past. That trail is the location of the hot springs, and is the historic terminus of Camino Cielo. 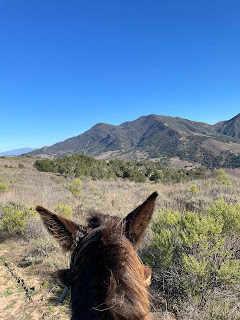 If you look right in the middle of the mountain you can see the zig-zag track of the route from the parking lot to the hot springs and then all the way to the peak. 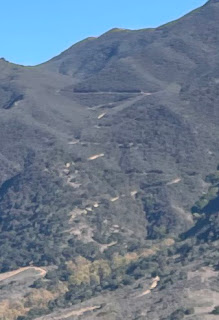 It is STEEP and exhausting, but an accomplishment to attain. 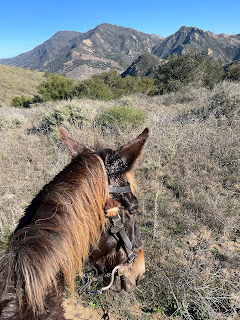 I think it tires Tobe out just remembering climbing it.

But there was no time to relax.... all the animals alerted to the sound of a motorcycle speeding toward us on the trail. 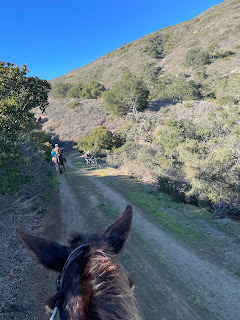 Totally illegal, whining like a wasp, he came hurtling toward us at 35mph on the dirt trail. All the animals took great offense. 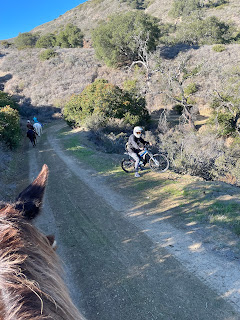 We shouted at him to stop, so he pulled over and the animals passed by, wary and nervous.

That was received with a big "Whatever." 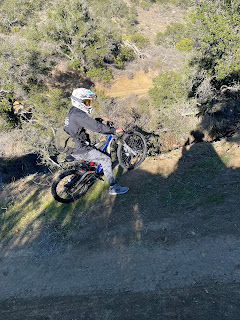 There was no license on the motorcycle and he was in an obscuring helmet, so surely he figured he was able to break the law with impunity.

I told him I had his photo and would turn it in to the Authorities.

When he heard that he gunned his engine and roared off, spurring Tobe Mule to jump forward.

I really didn't know who I might report it to, never having had this happen here before, but amazingly as we got back to the trailhead we ran into 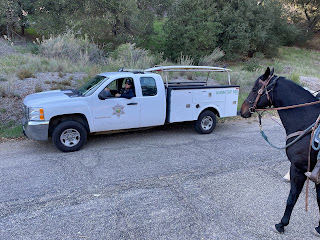 the State Park Lifeguard and Ranger. To the rescue, just in time. 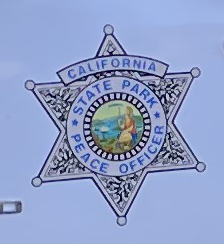 We explained our encounter, and he went up the trails searching for the motorized speeder. He said that based on the photo I sent him the motorcycle's ccs were too high, although presently the "electric bicycles" are still being debated in the courts as to whether they will be allowed access on the trails.

We want it kept for hikers, equines and bikes. The bikes scare us enough, we can't contemplate motorcycles! 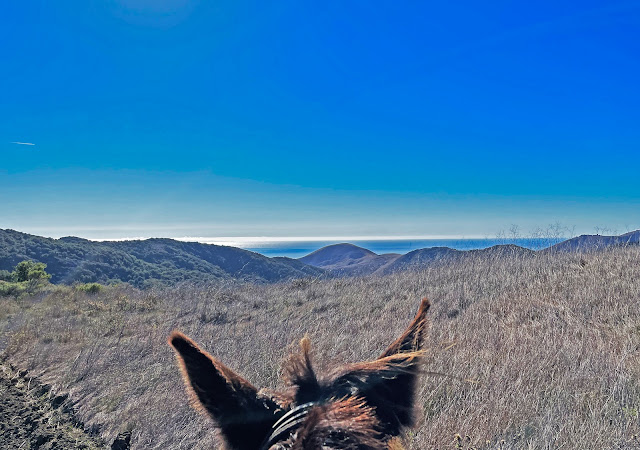 But no one fell off, we got back to the rigs safely, and the experience of the view of the shimmering sea and a day spent in good company will be the memory we hold dear.