The first day of a Jerry Tindell Horsemanship Clinic in the Sierra Nevada mountains above Fresno, California. A diverse group of a dozen people came, from as far away as Texas and the Yukon in  Canada, and everyone learned new skills and BackCountry HorseManship principles in a hands-on environment high in the mountains. 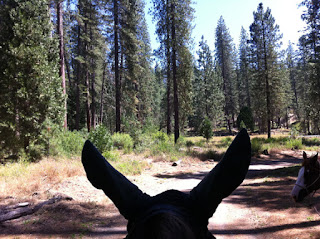 Our first campsite was nestled in a beautiful place called Blue Canyon, formerly the site of a timber mill used to harvest the adjacent forest. We drove the rigs into a staging area, and then had our individual campsites in the woods, surrounding the camp cook kitchen and fire. 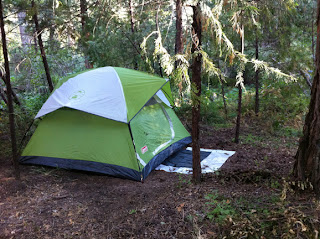 Home sweet home. This is the very first time I have ever bought a tent and set it up all by myself in the woods. It was quite cosy and comfortable. A whole new world of adventure opens up for me. 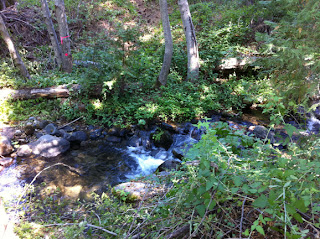 And this is the front yard view.............. the sounds of the stream rushing by to lull me to sleep, kinda like some country song. 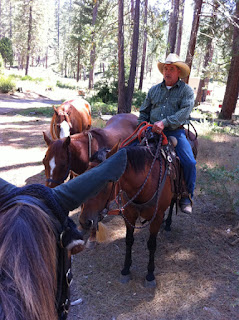 Here's Jerry giving us the day's instructions and plan. Tobe listens carefully, he knows when JT talks he isn't foolin' around, he has information to impart and expects to be given the respect due a teacher and role model. 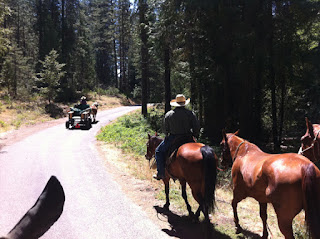 We take off down the road, following a wagon pulled by two Belgians. JT is ponying two horses, leading them along, and Tobe is making his altitude and attitude adjustments. 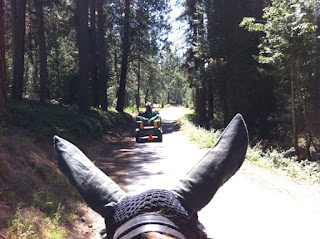 The wagon led the way ahead, and it took a while for Tobe to be willing to get closer to it. It set the pace, inspiring thoughts of what a SLOW event crossing the continent in covered wagon days was. And this is on a road, not a trail! 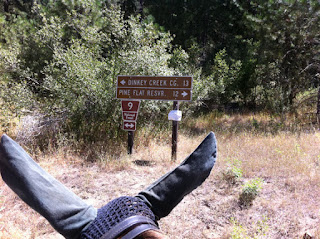 The sign says Dinkey Creek one way, and the Pine Flat Reservation the other. Either way this feels like the middle of nowhere, and there are no cars on any of the roads. 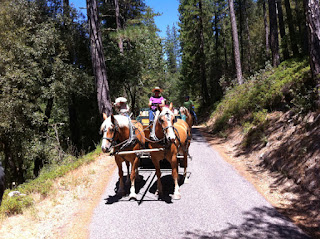 Here's the team of Belgians, half-sisters, making their slow and steady progress. 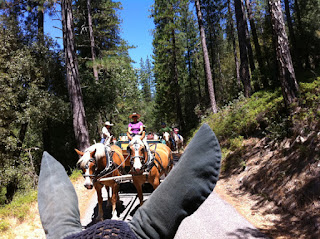 Tobe is actually used to being one of the bigger animals on trail rides, but these gals had him beat. I am very fond of the calm and steady demeanor of draft horses, and this is a very beautiful team. 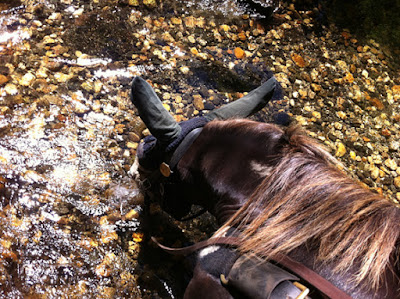 Crossing a stream and stopping for a drink, easy to believe that theres gold in these here hills. Over the decades timber and mining have brought influxes of immigrants to this land, and cattle people have settled in for the long term. 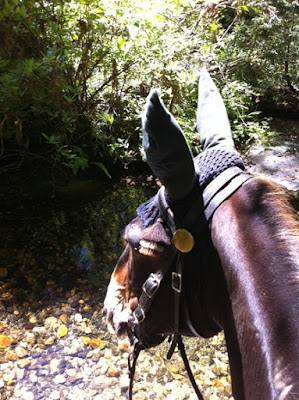 Nothing like a cool drink on a hot summer day. 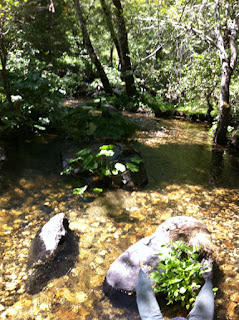 Unless it is a snack. Tobe always thinks of water-crossings as an opportunity for an especially tasty lunch buffet. I don't even know what a lot of the plants are in this area, I leave it to Tobe to decide what he wants to munch on. He seems to have a donkey dietary disposition, which is second only to a goat's. 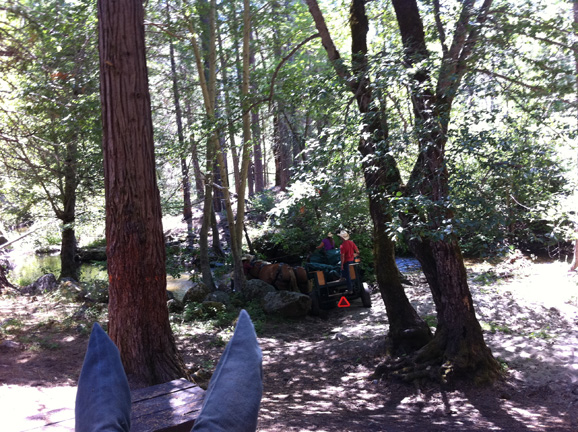 Then oh my gosh, the gal with the cart decided to drive off the trail and take them down INTO the stream to water them. Sure didn't look like it was possible, but what do I know. 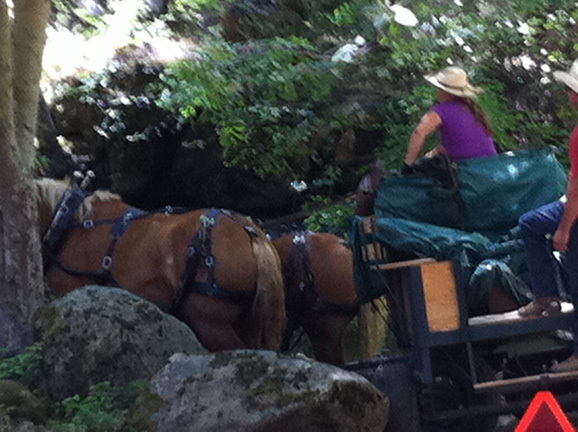 Well, somehow the team turned just a bit too far to the left and the back left tire snagged up on some rocks. The cart started to tip up and one of the riders jumped up on the off side to weight it down. 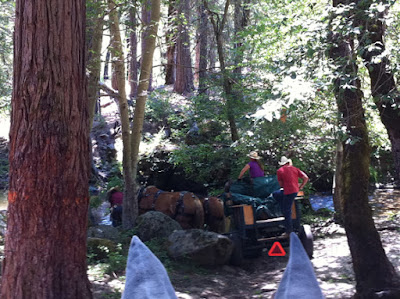 The Belgians were stuck, standing on river rocks, slipping and unable to move forward, and the wagon was wedged in place. This was like the big drama moment in a Disney movie about the Pioneers! 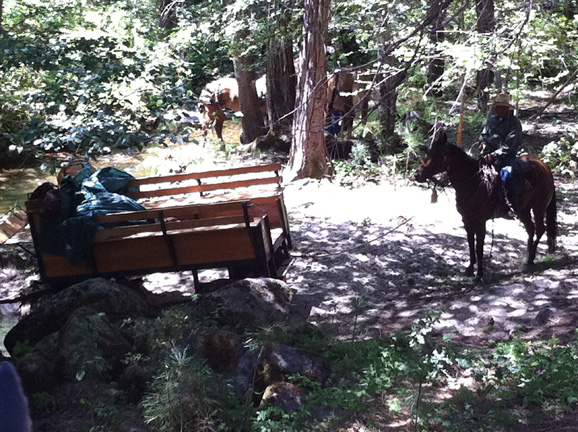 JT calmly organized the rescue effort. The Belgian team was unhitched and led away to be checked for injuries and to calm down. JT took his horse and tied a rope to the cart and pulled, asking the horse to back up steadily like holding a cow. Several people got down into the water and pushed, and finally with the aid of a second horseback rope-puller they were able to extricate the wagon and get it turned around. At that point the Belgians were put back into harness and they took the wagon back up to the road. 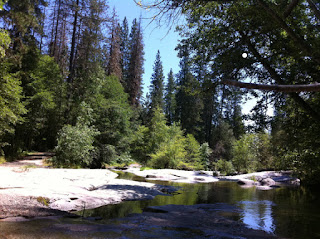 We rode on a distance until we came to this creek crossing and stopped to eat our lunches. I sat and watched dragonflies and thought about focusing on the positive, on the moment, and on beauty in nature. 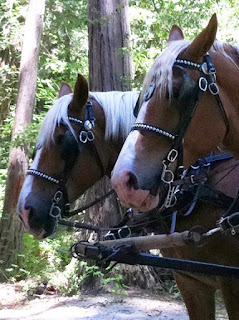 The Belgians seemed none the worse for wear, but glad for the rest stop. 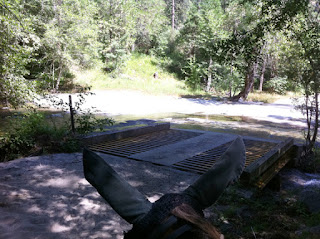 This cement bridge led from one side of the river to the other. It has cattle-guard grates on either side and a cement walkway down the middle. Almost everyone took their horses around it, though the water, and there was much commotion as the horses in metal shoes slipped on the mossy granite stones. It was a bit of a panic, and I said to JT I was not at all enthusiastic about going that route, and he told me to just walk up the middle of the bridge. It was not narrower than many trails Tobe goes on regularly, we did it perfectly. 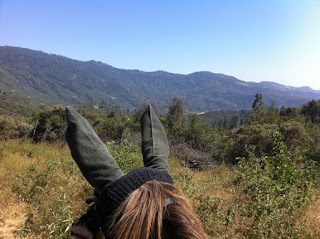 Back up out of the stream area we came out to ridge tops where the canyon vista opened up. Rugged and beautiful, this range is not too far from Yosemite and King's Canyon, both well known National Parks. Both likely to have been crowded full on such a lovely summer day. This illustrates the way that without maintenance the manzanita and other underbrush fills in any open spaces. 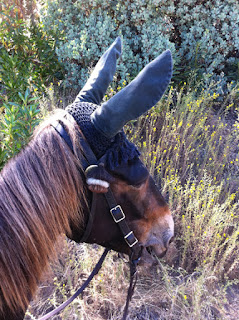 Tobe models the latest in gnat-proofing ear wear. I found that if I soaked the cotton with bug spray we were able to move with impunity through the hordes of small tormentors. The one thing I am most concerned with is keeping flying insects from going down into his long ears. He might dance a tarantella trying to shake them out, and I might get shook OFF. 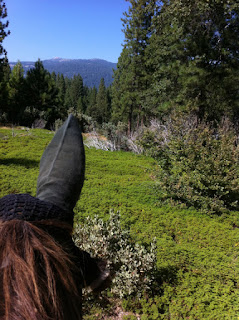 In valleys where selective burning has taken place the first plants to cover the ground are the low bear's clover and other wildflowers. It is beautiful to travel through the forest slowly and see the plant communities changing. 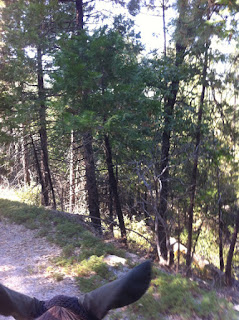 And very nice to be in the shade on a hot summer day. We did a very long ride but none of us were especially tired out, and it gave the animals a chance to get used to the altitude. Tobe went from zero elevation, seaside, to 5,000 feet and didn't bat an eye. This meant we didn't battle physical problems, and could concentrate fully on the principles Jerry wanted us to be studying and working with our animals on.