The second day of a Jerry Tindell Horsemanship Clinic in the Sierra Nevada mountains above Fresno, California. We left our initial campsite and walked a 6.4 mile loop that moved us to the homestead of a gracious rancher who allowed us to set up a campsite on his land. 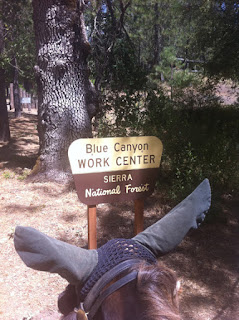 The vehicles were left behind parked at Blue Canyon, except the cook's massive living-quarters trailer stocked with our camp kitchen and food. She drove on ahead while we adventurous equestrians prepared to head out in style on our trusty mounts. Tobe was the only mule, I am sorry to say, but he represented the mule team with enthusiasm. 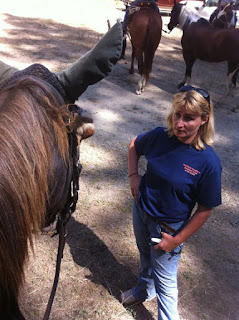 A veterinarian came to give us lectures on animal first aid and care, and Tobe always likes vets so he was attentive and respectful to her. Ya think he can tell she owns 4 mules? 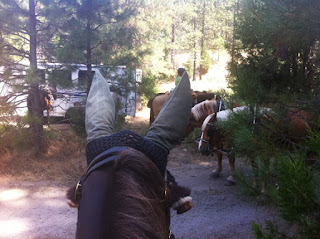 The Belgians waited with stoic grace in a shady spot, knowing another hot day of pulling the wagon was about to begin. 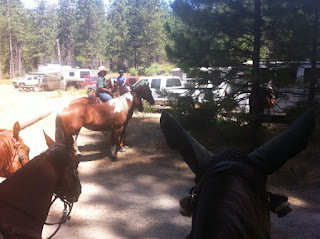 With any group of a dozen riders there are always last-minute panics, and it is always instructive for me to watch people handle their stock. 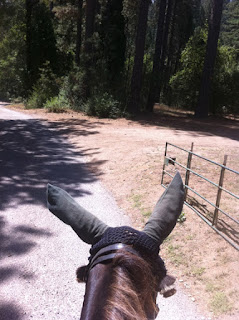 Finally it was time to head 'em out, and through the gate and away we went. 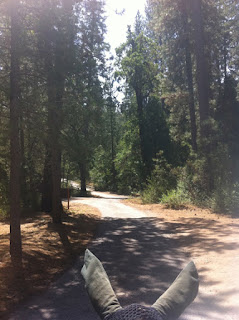 Once again the roads were pretty much clear of any cars, a good thing, but almost eerie, in a "Land that Time Forgot" kind of way. Just a few miles away there would be legions of tourists gearing up for a beer-fueled weekend. Judging by the trash that filled the campsite ground when we got there they'd be a loud and rowdy bunch, so we were leaving the public campground area before their predictable arrival. 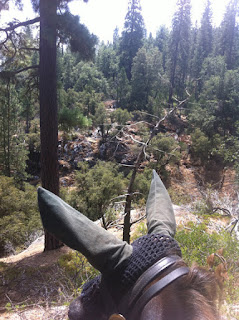 Back out into the forest, and already since we were passing through some of the same areas some of the more memorable trees or rock formations are starting to be familiar. 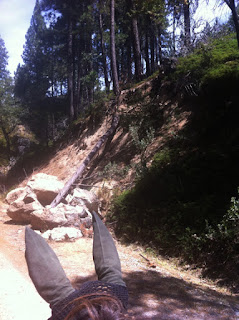 This recent rock slide, for instance, that we went past yesterday. When the rocks came crashing down to the roadway they brought a tree with them. 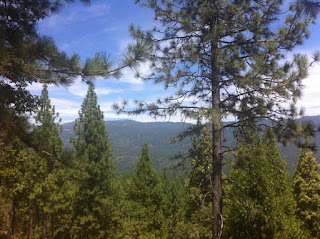 Coming up out of canyons is always a reward, with vistas stretching to the horizon across the valley floor. 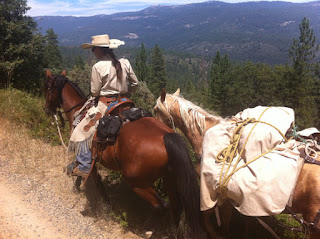 I started out in front of the group of a dozen but eventually I decided I wanted to keep up with this gal who is a professional packer and breeder and trainer of Morgan horses. Astonishingly enough by keeping up with her Tobe and I went 4.3mph, which is double his usual mule gear 2.2mph. I really didn't know he had it in him! After a while we realized the rest of the group was NOT behind us..... we forged on at speed!
We later learned that the Belgians had started having a rough time of it, so the vet had the whole group stop and count their respirations. A normal horse breathes 16-10 times a minute. The Belgians were getting up to 60-80, dangerous, so they'd stop and time them and count, and when they got down to a safe measure they'd proceed. 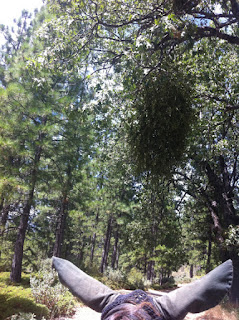 A massive ball of mistletoe hanging in a tree, low enough for me to snag some for Druid good luck by positioning Tobe beneath it. 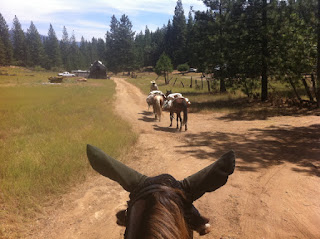 Here we are arriving at the ranch where we'll spend the next 2 nights. The buildings date to 1860, and the apple orchard was planted in 1870. We didn't know that the main body of students were so far behind up, so we strolled in and had some watermelon, got the animals watered and de-tacked and fed and high-lined for the night. We were quite cosy by the time everyone else came in. 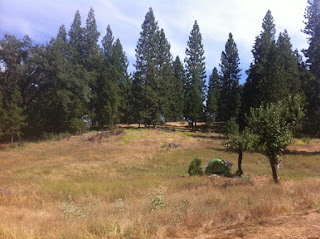 I pitched my tiny green tent underneath one of the apple trees, whose unusual tasting blush pink fruit was a treat for both Tobe and I. We saw the mule deer who come into this meadow to eat the apples, simply amazing that trees that old can still be producing fruit. A bit of a Cowboy Shangri-La.
We were welcomed by the owner with Old West grace, he made us feel completely at home and the 96 year old woman whose family has run cattle in these valleys for generations came and told us stories about the settling of the area. What a treat to see such a private and unique special place.
Cue up the swelling music for the Western Saga!