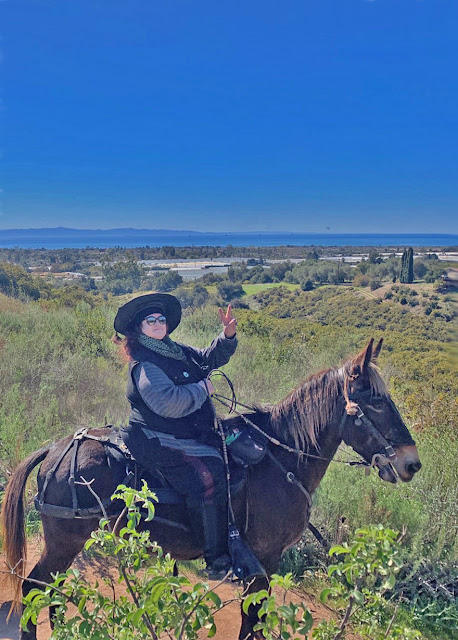 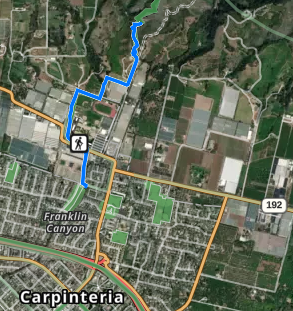 Yep, a short ride.
I tapped out and asked my companions to turn around after we had experienced only a short distance on this trail. My goal with this blog is always to make everyone wish THEY had a mule, and could go have these experiences also..... but today this trail scared me. 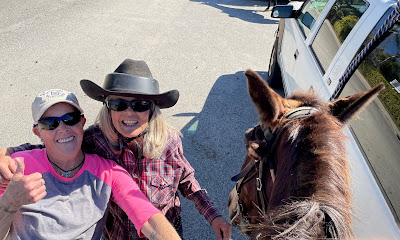 It didn't scare my brave equestrian enablers as much, but they agreed to turn around to help me.
In fact the day had started out wonky, I just couldn't get mounted up on Tobe, my right leg isn't working so well these days. But Jamie (in the pink) suggested mounting on the off side, which Tobe thought was fine, and huzzah! I was up and ready.
Bunnie (in the hat) has been a fearless rider who has ridden the Pacific Crest Trail from Mexico to Canada TWICE, so as we set off she led on. 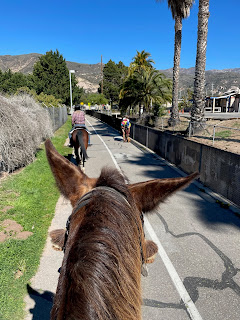 From the street parking that is designated on the Franklin Trail website we entered into the "trail" which turned out to be a heavily trafficked 2-way bicycle thoroughfare. I would hardly call this an equestrian friendly trail by any means. Ahead in the distance you see a man restraining a tiny boxer puppy way too young to have had all its shots for public adventuring. At least it was leashed. 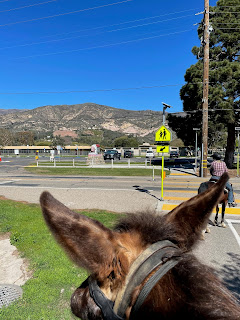 At the end of this bicycle highway we came to the 192 and crossed over it onto the edge of Carpinteria High School, which is currently not in session. If I'd known I would have utilized their parking lot, which was filled with cars, presumably belonging to people hiking and biking on the trail ahead of us. 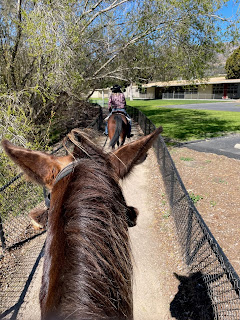 The trail here is fenced on each side with chainlink, and so narrow that passing anyone is quite a squeeze if you are on the back of an equine. 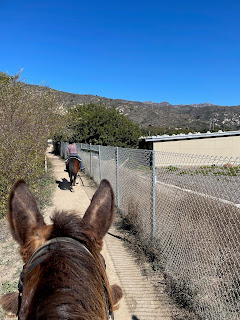 So the trail continues along the back side of the high school, and on the other side what smelled like a marijuana production facility. It is a big controversy now how much the odor pervades the city, from these greenhouses formerly dedicated to orchids and cut flowers. They say there are more acres of marijuana under cultivation in Santa Barbara County than all of the famous Emerald Triangle up in Humboldt County.

The trail takes a turn and edges past the sport fields of the High School and avocado ranches on the other side. The pathway is an elevated berm with a steep drop on one side, nice and level and well maintained. 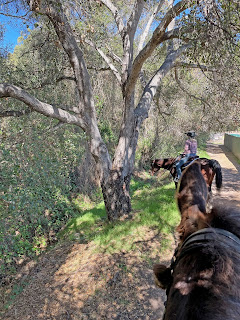 The creek that runs down through Franklin Canyon is shady, with lush tempting grass the equines want to snack on, and riparian trees showing that water subsurface is supporting their growth. 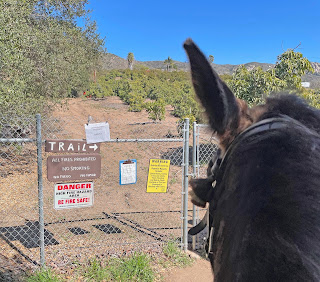 The trail is multiply signposted, and at this corner we followed along green plastic sheathed fencing to a blind turn. Knowing how many bicycles use this trail such corners are always a concern, since mountain bikers tend to enjoy fast downhill runs and coming up quick on a horse or mule can be problematic. 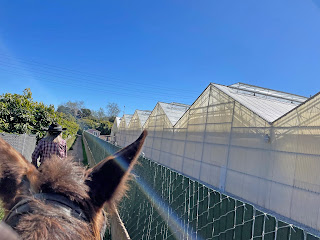 Here is the fencing, and greenhouses that still had signage for orchids but we could not tell what was inside them. Strange whirring and ventilating wooshes were audible, and Tobe is a brave fellow but he was paying attention to the sounds. 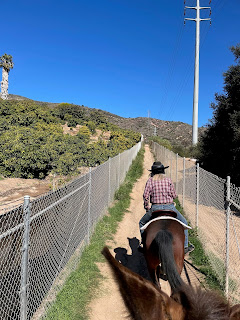 Finally the trail headed UP, and the mountains appeared ahead of us. But in stark contrast to the smooth flat trail by the high school, this one was extremely eroded and rutted. Gullies carved by rainfall have hollowed out the trail, leaving sections of stones and holes, and there has been no effort to place runoff mitigation boards or treads in the trail. 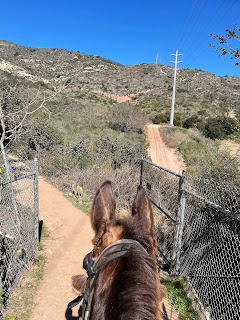 After crossing a few nicely sturdy bridges we started up the actual mountain trail. At this point it became obvious that the trail is being maintained for bike riders and hikers, and decidedly NOT for someone on a 16hh mule. My head is 10 feet plus in the air when mounted and I was very glad of my helmet as I proceeded to bash through branches. Even my companions on smaller horses were calling out "low bridge" as a warning as they shimmied under limbs. 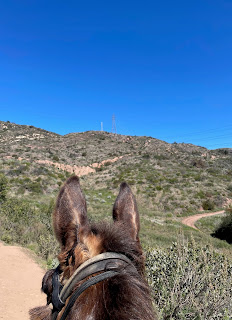 And then there were the other folks on the trails. Looking up the mountain we could see them, dozens of them, crawling ant like in their bright colored clothing. Or hurtling down at speed on bikes. To their credit, I will say that all of the dozens of people, maybe 100, were very pleasant and stood off to the side of the trail to let us pass and leashed and restrained their dogs. And the bike riders were pleasant people also. But there were so many of them! 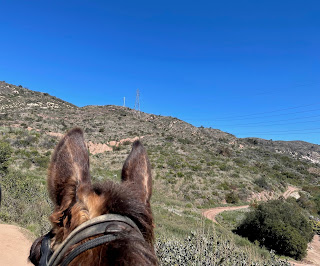 The mountains are beautiful,and the exposed rocks lovely. But I had had it with dodging around branches and people and bikes. I was pretty much done. My hair was full of twigs, hopefully not ticks, and Tobe who is a very surefooted fellow was stumbling on the rutted trail. 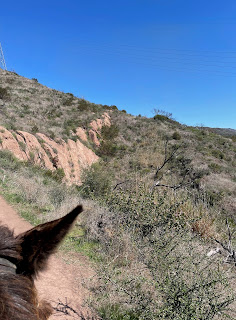 At this point the trail started to be a series of tight switch backs, and I expressed a preference for continuing to a point where we could get a good look at the ocean and landscape below and then please could we turn around. If we could come here on a weekday, fine, but I am of the opinion that as popular as it is with the Carpinterians out for a healthy hike it is best left to them. Sharing the trail is fine in concept, but not so nice in actuality. 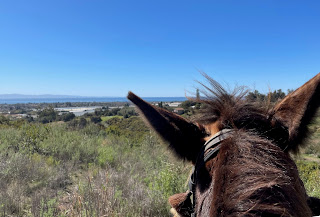 So there it is, the view. With the Channel Islands shimmering on the horizon, what we came for. 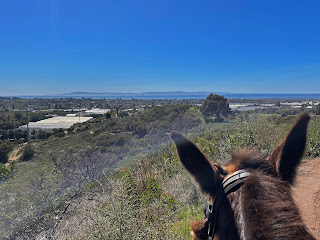 But looking closely, the acres of greenhouses are a huge percentage of the land. This is a prime avocado growing area, and the marijuana people moved in on them when international commerce made it cheaper to ship in cut flowers from South America and orchids from Asia. 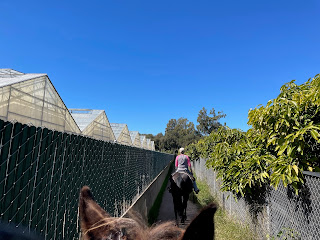 So back down we came, Jamie leading now on Mosca, past the mystery greenhouses. People complain a lot about the "stench of skunk" in Carp, but if these were marijuana we did not catch a whiff. 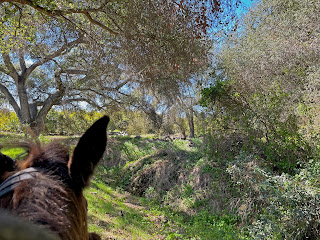 Back down through the creek area, lush, and so cool after the trek up into the chaparral with its thorny bushes and rocky trail. 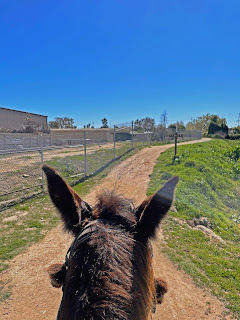 Back to the trail alongside the high school... 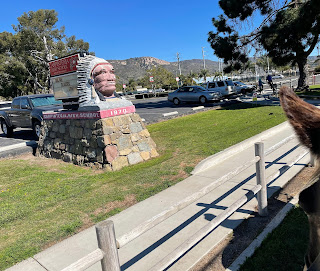 And a last nod to the feathered headdress Indian mascot of the high school..... how long before they come for him, eh? The war bonnet was worn by the American Plains Indians, never the local Chumash, so this poor Chief is losing out both on historical accuracy and cultural appropriation.

So, that's the story of our brief exploration of the Franklin Trail. I think I highly recommend it for 2-legged exploration, and applaud the people who worked so hard for so many years to carve right-of-ways out from the various private landholdings.

But as for me and mine, we will stick to trails where we don't have to anticipate a jostling for space on a narrow trail around every corner, and have to bend down onto the saddle and still be scraped by branches.

"May your trails be crooked, winding, lonesome, dangerous,    leading to the most amazing view."