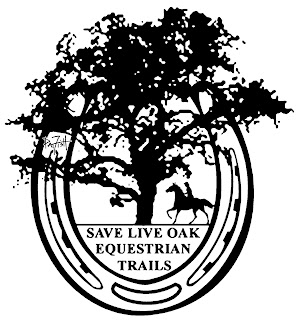 This blog is meant to be a testimony to the pleasure of four-legged exploration in the front country trails of our marvelous region. But now access to the best of the local trail systems, the ONLY exclusively equestrian area, is being "modified" to become multi-use. I drew the logo above to publicize the effort to stop this change. 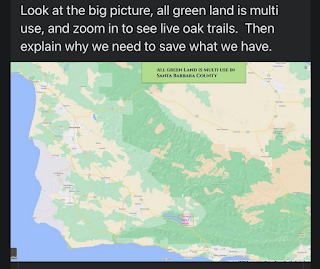 That tiny red area is all we have that is exclusively equestrian. We are not greedy, we just don't want the trails, which have been set aside for us since Lake Cachuma was first created in 1953, to be ruined by hikers, with off leash dogs, and bicycle riders careening at high speed down the trails. 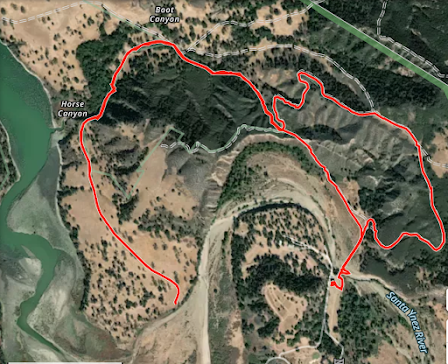 Today the MeetUp had 9 riders and we took a leisurely stroll in the beautiful weather. We traveled through a variety of riparian and chaparral zones, as the map shows, both wooded and open spaces.

Truthfully we were on the trail 3 hours, because it was nice to stop, give the animals a rest, and appreciate the views.

HOWEVER the day did not start out all that well. 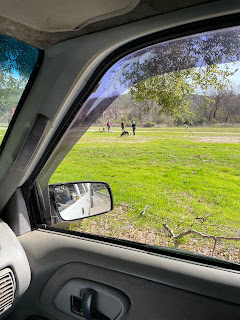 As I entered the equestrian parking area I immediately saw a group of people with a large German Shepherd walking through the grass. Not only hikers (currently still forbidden) but with a dog (always verboten.)

I told them it was illegal to be hiking there, and they said they had special permission, that they were training a Search and Rescue dog.

Of course I called the Rangers, who said they knew nothing about these people, and came out to talk to them. Eventually they were told to use the upper Campground area and not the trails or the equestrian area.

Then the Ranger told me that hiker access has been put off until May, and encouraged me to continue to lobby against opening up the trails. The Rangers don't want the extra work that conflicts will bring, and I also spoke with the Camp Host who was in a tizzy about having to add picking up trash to his care taking duties. Currently you can ride for hours here and NEVER see any trash. The Host told me the total amount of trash he currently picks up will be 3-4 water bottles per YEAR, ones that may have fallen unnoticed out of a saddle bag.

So, we parked and I began greeting my pals in the MeetUp and we all saddled up. But then just as we started for the trail head 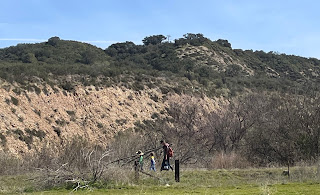 we saw this woman with two little kids heading out on the trail. We called to her, saying it was illegal, and again, of course, she said she was special and had permission from the Rangers. 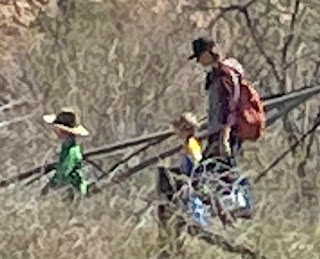 And here we go, calling the Rangers to come back again. 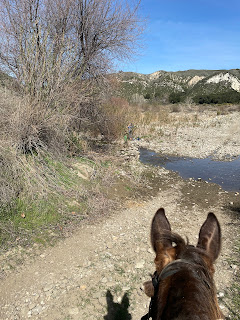 She took the kids down to the Santa Ynez River at the crossing, where they proceeded to squeal and splash about.

Not really safe with a large number of horses coming through. 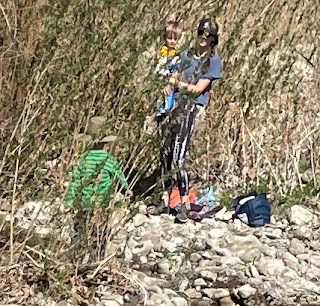 And she was adamant that she was special, the Rangers would let her stay.

This is exactly what we fear will be our every riding experience here if multi-use is enacted.

Not my circus, not my monkeys. We rode on. 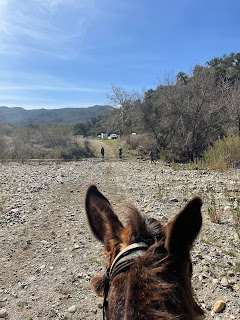 But, having called in the troops, I turned around to watch the drama unfold. 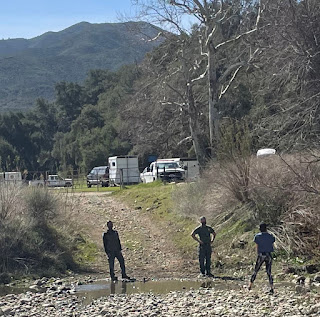 The standoff was loud enough for me to overhear. She claimed that because her husband was "on a trail ride here" she had permission to also be on the trails. 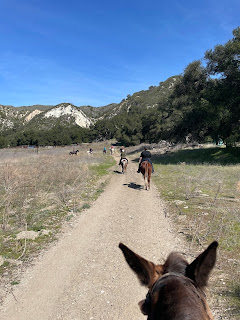 Meanwhile the group was waiting for me up the trail, so it was time to move along.

All the MeetUp rides are a loose confederation of individuals, and I am not a bossy Trail Boss. I only ask that everyone do what they can to help everyone be safe on the trail, and be courteous in the Cowboy Way. 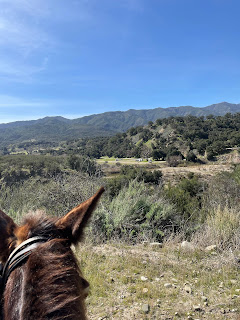 Once we cleared the first hill I turned Tobe to look back at the rigs, and was pleased to see the Rangers were firmly escorting the woman back out, and we hoped she would have a nice afternoon at their trailer waiting for her husband to get back from his ride.

But it is with a sigh that I document these encounters. What has been half a century of trails dedicated for exclusive equestrian use may very soon be like every other trail system, where people stop riding because they no longer feel safe. 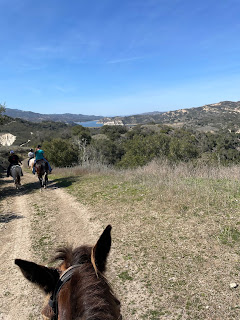 But for now, it was a beautiful day and Lake Cachuma was shimmering on the horizon.

Having the lake to navigate around on the many trails adds so much pleasure, and our gentle explorations leave nothing but hoof prints. 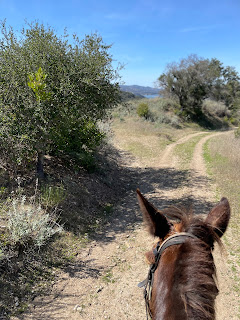 Many of the trails here are former ranch roads, kept open for emergency vehicles should there be a need to rescue someone on the property.

There are single-track rocky spans, but frankly when Tobe Mule is picking his way through them, or down a steep slope, I'm not taking pictures. 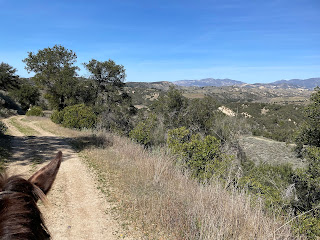 In sections like this I continued my new botanical whim, tossing California poppy seeds into the scruffy margins of the trails. If we get some more rain and the seeds have a chance to sprout before being found by ground squirrels, I look forward to riding here in Springs to come and seeing poppies blooming where they have not been before. 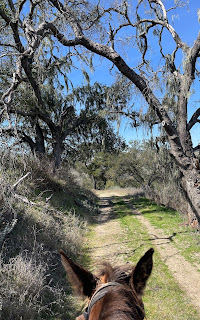 SO many of the oaks are dead now, and the sides of the trails are filled with their fallen limbs. 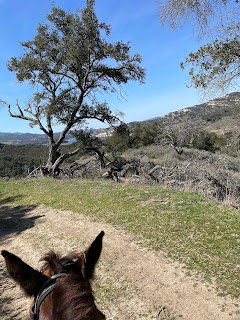 When I started riding here this tree had a whole section to the left that I had to go around to photograph the lake from this vantage point. Oaks have a way of "sacrificing" limbs to preserve the whole. We see it everywhere here. 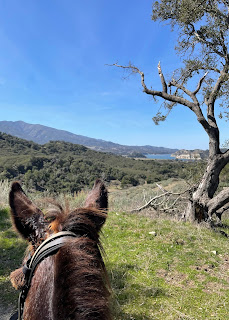 Another view, another shimmer on the horizon.

There are fences that prevent us actually going to the edge of the lake, which is at best tenuous anyway since the margins recede in drought times leaving expanses of mud. 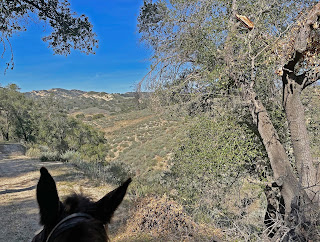 I think what I like best is the feeling that after so many indoor days spent typing away at a computer or working doing tattoos at my studio THIS awaits. The horizon, the sense of landscape untraveled, that my marvelous four legged gives me access to. 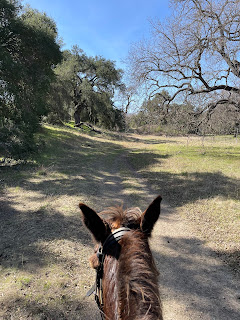 Funny thing about riding a mule or horse, how relaxing it is while at the same time you are always vigilant and alert. Obviously the equine is doing the hard work, and it is amazing that they do it so willingly. 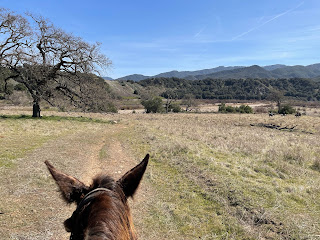 Here we are looking toward home, at the seaside, on the other side of the coastal mountain range. But for just these few hours we are in country. 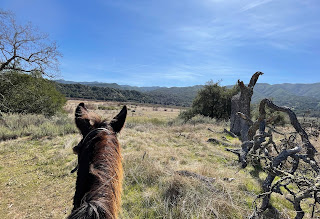 This mud flat used to be a finger of the lake, back a decade or more ago when I began to ride here. And with rainfall it will fill again. 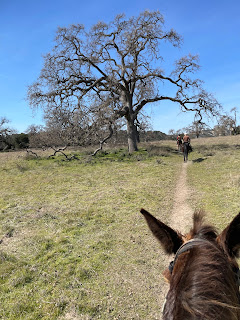 But it was time to turn back, so we retraced our steps across the flat land. 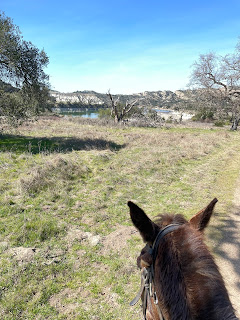 Here we were almost at lake level, catching glimpses of boats and the pontoons that section off the shallows. 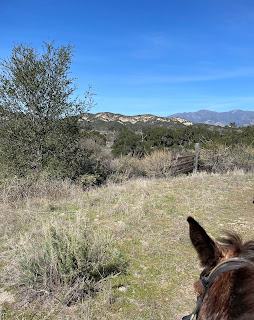 One last look out to the inland mountain ranges, trails for more ambitious days. 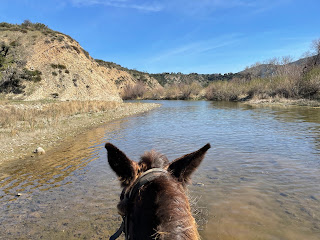 And the pleasure of crossing the river and cooling the animals' feet before we all enjoy a lunch together under the oaks in the parking area.

We vow to do what we can to preserve the dreamlike quality of these trails. 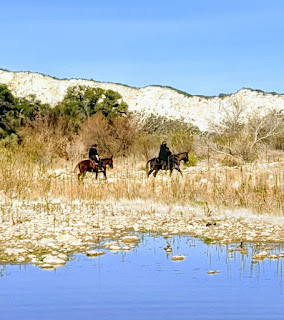 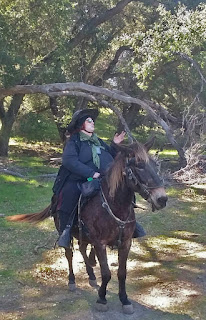