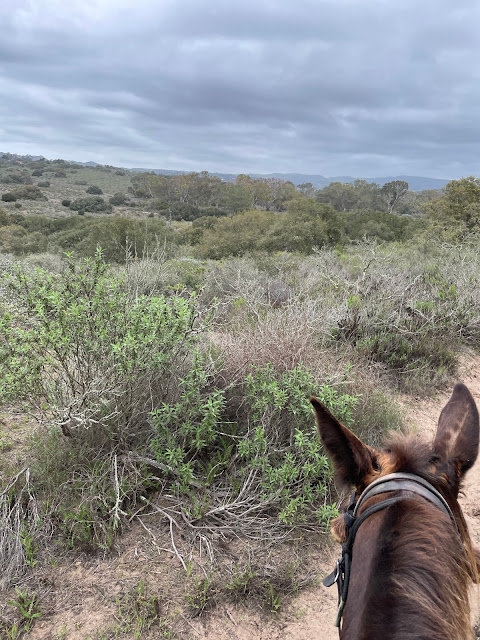 The property is so large, with over 2,000 acres of land, that each time we explore we find new things to see.

Today we were out a bit less than 2 hours, and traveled through different botanical zones and gave the animals a good work-out in the deep sand. 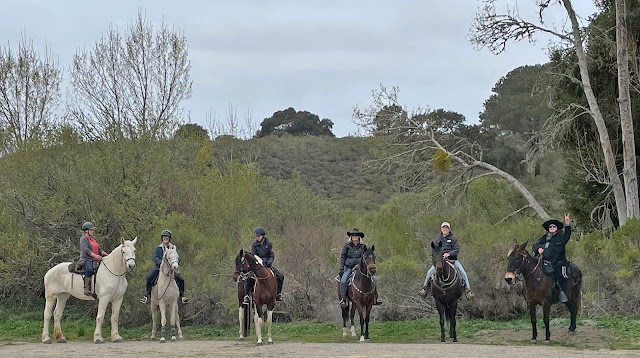 One of the best things about the MeetUp is that all the humans and the equines are different, and we never know in advance who may come along for the adventure.

The 19hh Percheron on the far left is a carriage horse, on her second trail ride, and the Arabian on her side gets the award for most lively. The Paint looking skeptically at them is a very energetic creature, while the 1/4 Arab standing placidly is the best behaved of the horses. The Thoroughbred lives her life to run the race, and Tobe Mule likes to get out and see the sights and experience new places.
So we did. 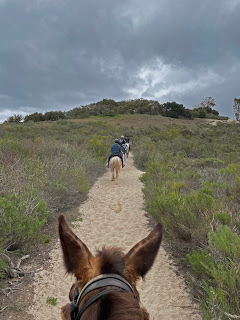 From the staging area we went toward the Eastern property edge, and then went straight up the line.

While we were tacking up we had met the owner of the white livestock guardian dogs that often challenge riders passing by on this boundary that borders their property.

Today we heard their distant barking but they did not charge the fence. 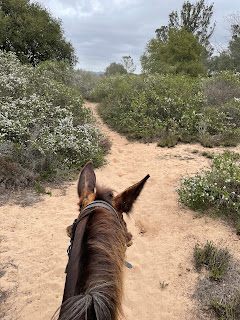 Often the trail splits, and the animals will choose the one less traveled to get a relief from the very deep sand that the main trails are known for.

Equestrians appreciate the sand. It makes the animals' legs stronger, and if there is rain these trails drain almost immediately, when the clay soil in the mountains becomes impassible. 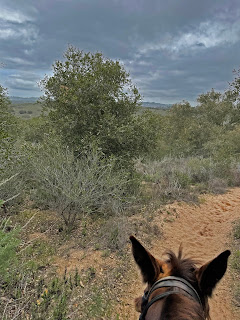 Whenever a ridge gives a view out across the property we can see across Lompoc to the Coastal Mountains.

In the chaparral the colors are muted, more especially so today under the cloudy sky. 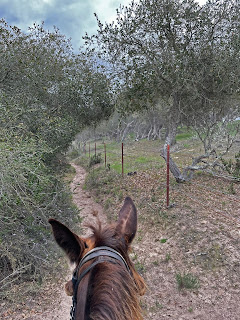 Going along the fence line we pass wild scrub areas, vineyards, and well tended ranches on our right.

The trails are not particularly well maintained, with the result that we are constantly brushing through bushes which knocks ticks off of them and down onto us.

I later found two ticks on me. Gak. 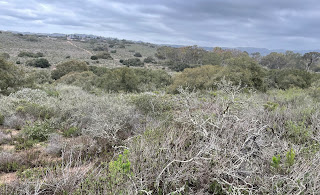 The sagebrush and artemisia are such a tangle that going off the established trails would be close to impossible. Never tempting. 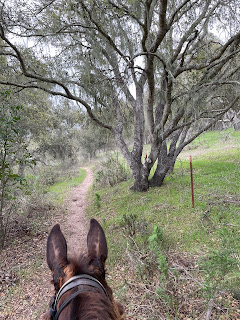 So we stick to the fence line and work our way up to the Mesa above. 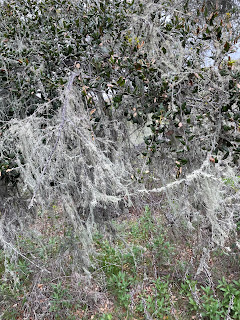 Many of the bushes and trees are covered with Spanish Moss, an epiphytic plant that grows on host trees. Sometimes it gives them a look of ancient abandonment, sometimes like a ghost spirit in the wind. 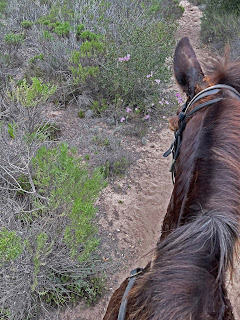 We did start seeing the first of the Spring flowers, these little pale pink ones I believer to be Tiny Baby Stars.

Time for me to get out my wildflower identification guides and start packing them along on rides as the annual floral display begins again. 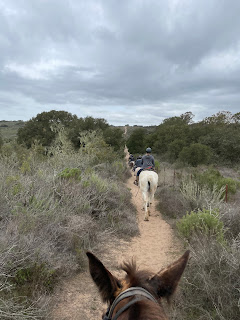 And as per my current botanical prank, I continued to spread seeds for California poppies as we traversed the trails.

I have never seen them blooming here, in fact they have not been visible on most of the trails I frequent, but if my efforts pan out they will in the future.

That may confuse botanists but delight travelers. 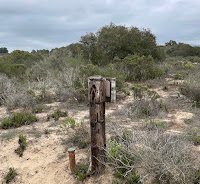 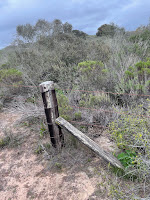 I like to keep a lookout for these wooden posts that are remnants of the boundary fence from yesteryear.

Most have long since been replaced but these have remained through many seasons. 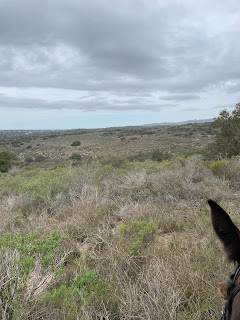 As you go higher up onto the Mesa the landscape stretches out and I feel the antidote to the city life wash over me, cure for too much time spent at the computer, too much time indoors.

Out in the air, in the silence and the uncivilized spaces. 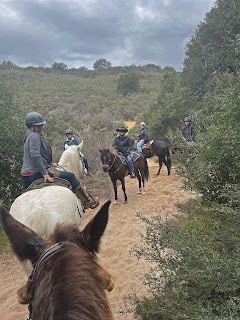 We stop and let the animals rest and the humans have a drink of water.

Fortunately all the animals get along, and the humans do also.

If we were not acquainted before, we become pals on the trail. 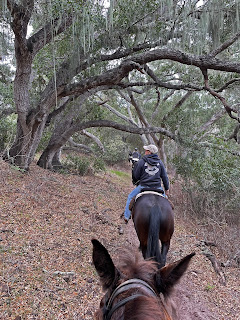 Then a turn took us down a trail I had never yet in all my wanderings through this place encountered. The trees were magically hung with Spanish moss, in a canopy above. 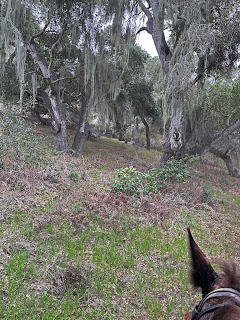 It gives a sense of a secret garden, where few have passed by. 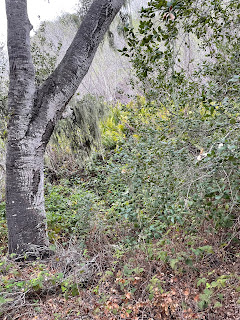 And in a gully on one side were big patches of ferns, something I was quite surprised to see.

They may only be this vibrant in this, the rainy season. 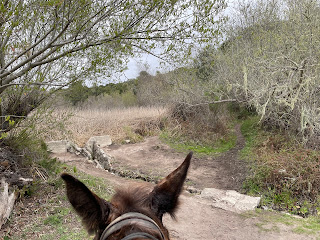 At the end of our trail we had to cross over this drainage ditch coming from what we were told used to be a pond with fish and crayfish. As we were getting ready to ride a local had told us when she was young people fished from it "but then the environmentalists put a stop to that." I don't know what happened, but when we rode by there was no lake, only an expanse of rushes growing and water coming out into these stone ditches which the animals were skeptical about crossing over. 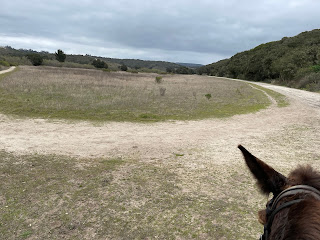 Then we popped out of the trails and into the central valley.

It is bordered by a big road well used by the community of walkers, baby stroller pushers, and bicyclists. 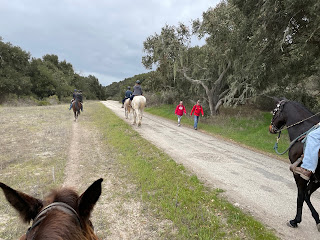 We encountered no one on the trails above, and down below all the people sharing the road were quite cheerful, out for healthy exercise.

But our ride was coming to an end.

Here we all are in alphabetical first name order in front of one of the historic Mission buildings. 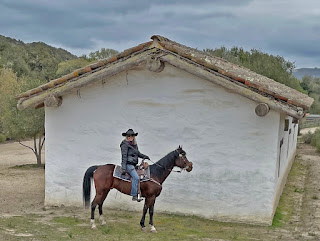 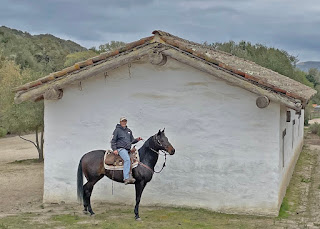 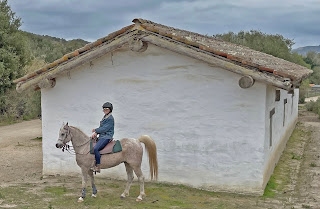 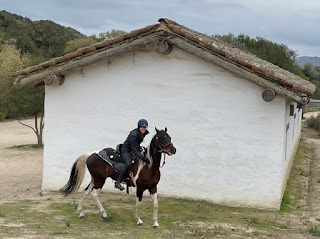 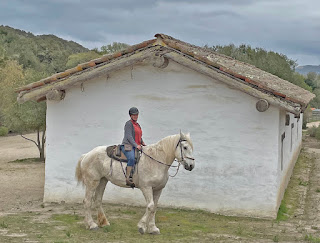 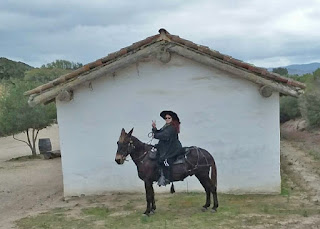